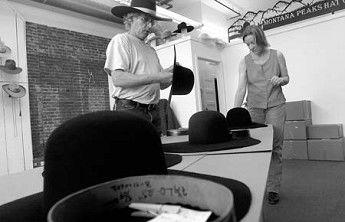 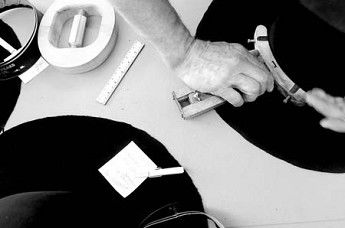 Richard Blackburn cuts the brim of a stock hat at his shop, Montana Peak Hats, that he runs with his wife Laura Wortman in Pendleton.<BR><I>Staff photo by E.J. Harris</i>

Richard Blackburn cuts the brim of a stock hat at his shop, Montana Peak Hats, that he runs with his wife Laura Wortman in Pendleton.<BR><I>Staff photo by E.J. Harris</i>

Laura Wortman could never find a hat that fit. While most people might live with the discomfort, she did something radical. She and her husband, Richard Blackburn, learned the hundred-year-old craft of hatmaking and took over their own business.

Now they're moving that business to Pendleton.

They officially opened on May 22. Some people might have noticed the shop on Court Avenue with the big Montana Peaks Hat sign in the window and the antique-looking equipment sitting inside. While the equipment may be antique, Wortman and Blackburn use it every day.

Most of their equipment is more than 100 years old, Wortman said. One machine dates back to 1889. She said the equipment is handed down from hatter to hatter over the years. New equipment doesn't exist. New hats are all mass produced, she said, so no modern equipment is made for custom hat fitting.

"Equipment's very hard to come by," she said.

Along with all their equipment, hats hang on the wall that could have come from an old western movie, or an old black-and-white photo from the wild west. The hats are made from pure or partial beaver felt, Wortman and Blackburn said, which lend to the hat's breathability and durability.

"We don't have to put a cover on this in the rain,"?Blackburn said.

They both said the hats they mold are hats for a lifetime, or even as family heirlooms. They also cost about what a person might expect for a lifetime hat, at $300 to $500.

They make cowboy hats, fedoras and even bowler hats.

And each hat is custom made and takes several days to craft.

They use a French conforming pattern hat - another century-old tool - to make a "caricature" of the shape of a person's head. They say caricature because every bump and dip are amplified on a small-scall outline. They build the hats to match the exact outline.

"So when they put it on, the first time, it fits," Blackburn declared.

Wortman did this for her head and showed the lumpy caricature.

"My head's a long oval," she said. "It sticks out at the front, more on one side than the other. I?can't find a hat that's comfortable."

So she makes her own.

The Montana Peaks Hat businesses started in Great Falls, Mont. Wortman and Blackburn took it over from Jim Pruitt after Wortman completed her hatmaking apprenticeship in 2006. The couple has been running essentially an internet business from their home in Colville, Wash. They also work as nurses in a local hospital ,but Wortman said she felt it was finally time to retire from healthcare and commit to the craft she's grown to love.

In doing so, she and her husband went looking for the right town.

They said Pendleton was the right fit.

"Pendleton has that western feel," Wortman said. "Pendleton just stuck out as the place that had the most potential for us."

Even with the shop's move, they plan to keep their national, and international, clientele.

"We send hats all over the world and the money comes here," Blackburn said. "Helping to balance the trade here."

They send hats to the Disney production of Buffalo Bill's Wild West Show in France. They recently made eight hats for the western film, Gunless, scheduled to premier in 2010.

"I love hats," Wortman said. "I grew up with an appreciation of things made by hand, a basic appreciation for handicraft, doing things the old-fashioned way. So much of that has gone by the wayside. Cowboys and hats, it's a part of our heritage."