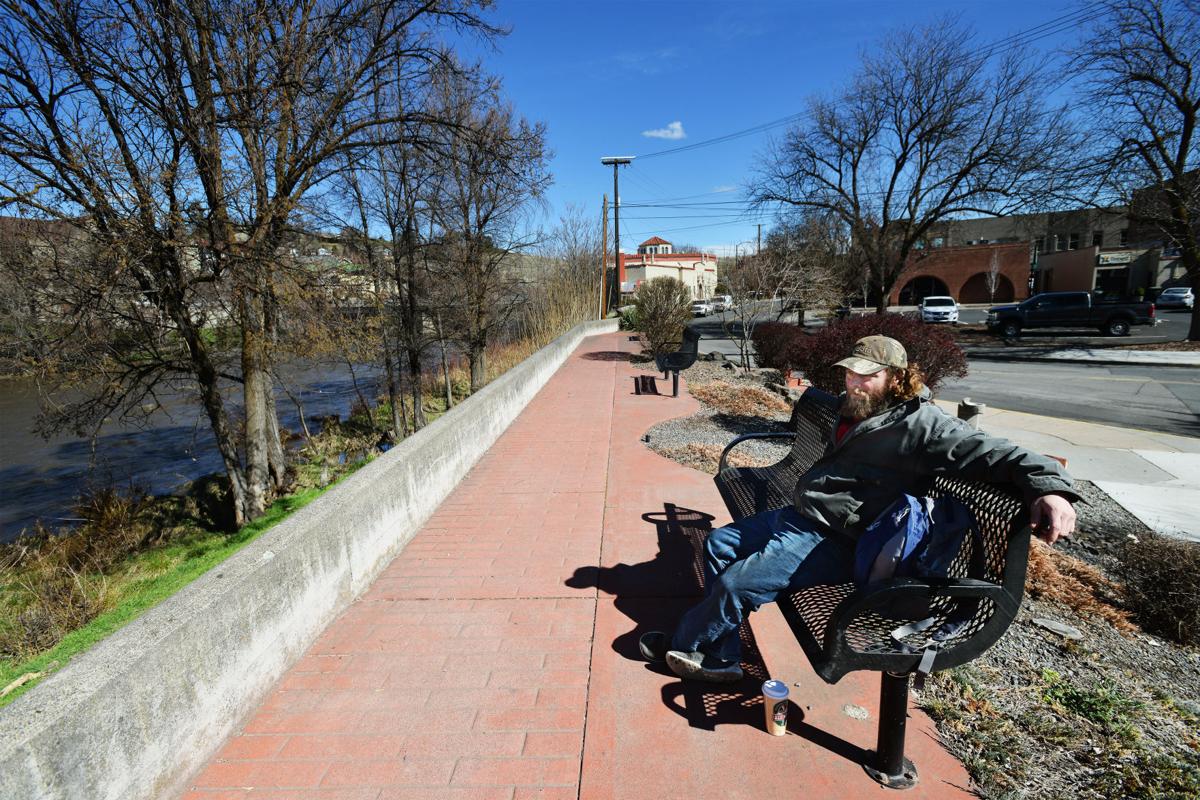 Stephen Scarbro, originally from San Antonio, Texas, sits on a park bench along the Pendleton River Parkway on Thursday in Pendleton. Scarbro, who is currently homeless, says he is spends his time maintaining a low profile while waiting to start a new job. 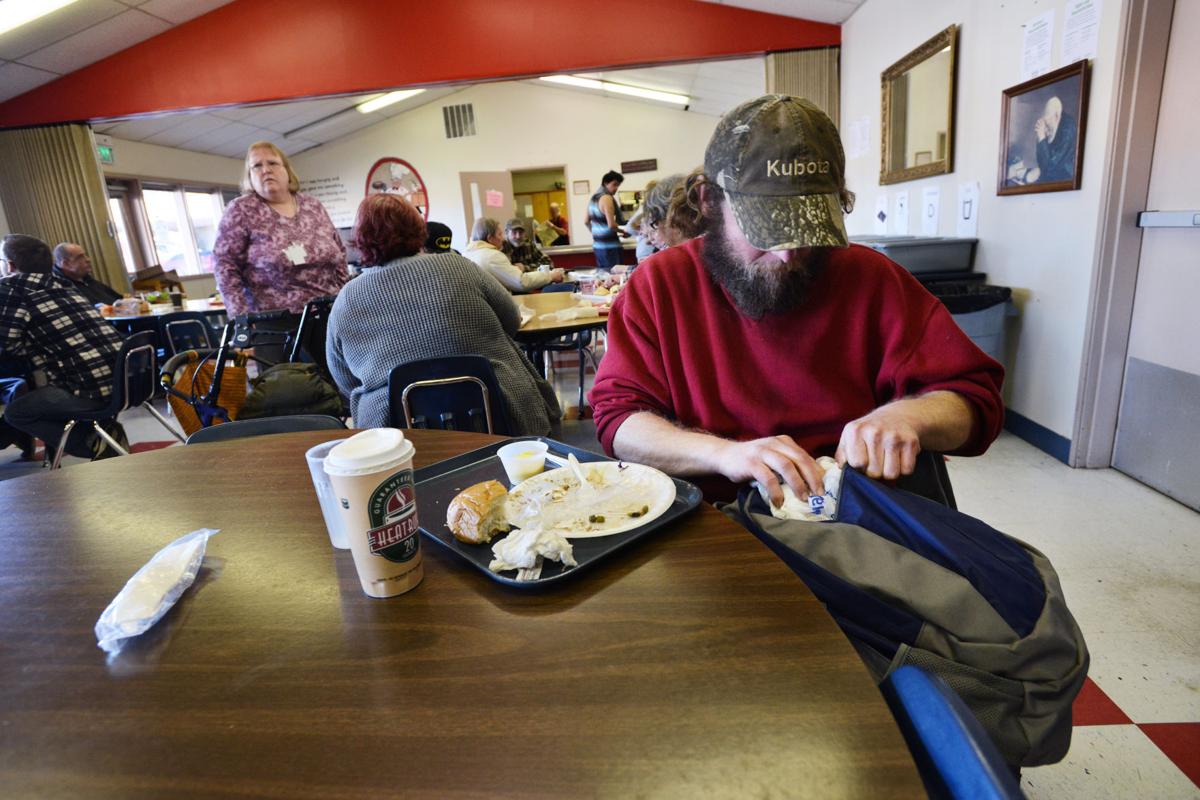 Stephen Scarbro, who is currently homeless, puts a Danish he saved from his lunch at the Salvation Army into a bag to save for later Thursday in Pendleton. 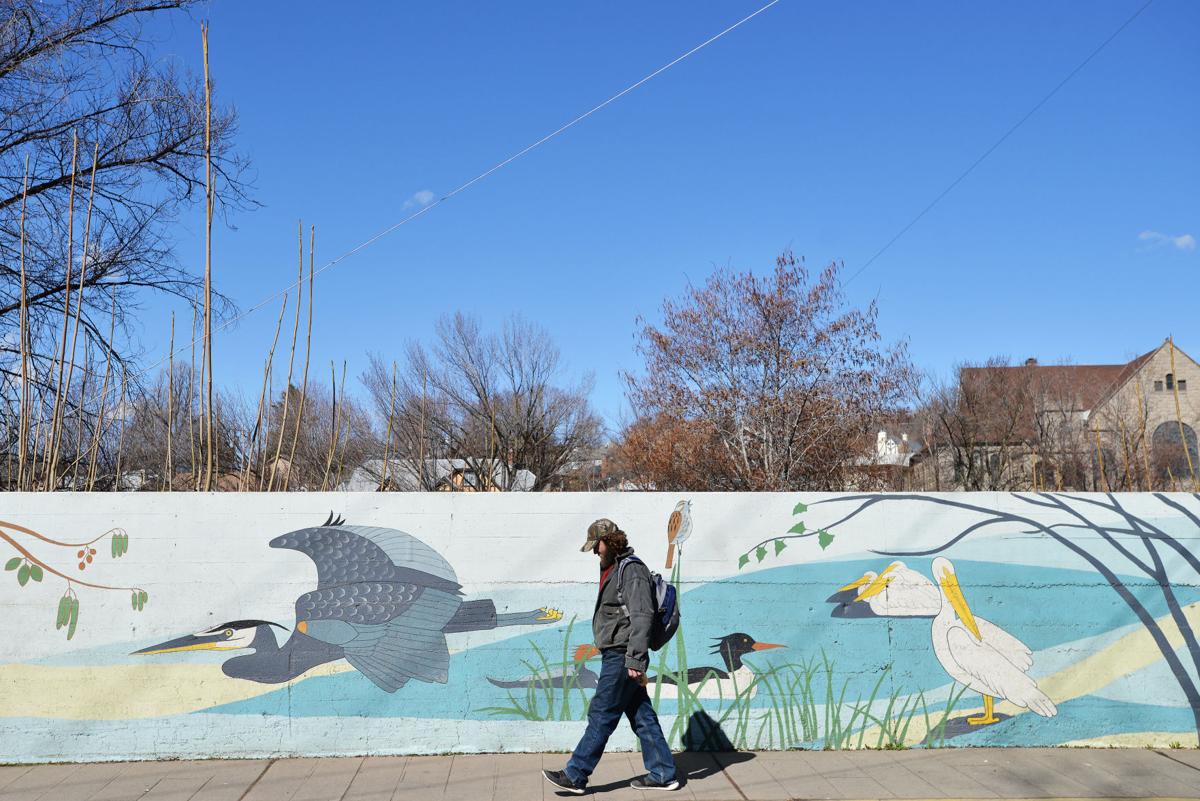 Stephen Scarbro, who is currently homeless, walks down the Pendleton River Parkway on Thursday in Pendleton.

Stephen Scarbro, originally from San Antonio, Texas, sits on a park bench along the Pendleton River Parkway on Thursday in Pendleton. Scarbro, who is currently homeless, says he is spends his time maintaining a low profile while waiting to start a new job.

Stephen Scarbro, who is currently homeless, puts a Danish he saved from his lunch at the Salvation Army into a bag to save for later Thursday in Pendleton.

Stephen Scarbro, who is currently homeless, walks down the Pendleton River Parkway on Thursday in Pendleton.

Case managers for Community Action Program of East Central Oregon had a problem with their 2017 count of the area’s homeless population.

The point-in-time census counted 55 homeless people in Umatilla County, one in Wheeler County and none in Gilliam or Morrow counties — the regions where the nonprofit aims to help low-income populations. Glenda McDaniel, one of those CAPECO case managers, said the figure was surprising because it was so small.

They conducted a second count at the end of the summer, that time finding 64. Still lower than their estimates.

The latest count came Jan. 31, and it revealed 557 homeless people in the four counties.

“We knew the numbers were out there,” McDaniel. “And there are probably even more.”

Gilliam and Wheeler counties had no documented homeless population. But 46 were counted this time in Morrow County, including 17 females and 18 males in Heppner. Umatilla County had 511, with 292 in Pendleton, 123 in Hermiston, 51 in Athena, 44 in Milton-Freewater and one in Echo.

Males outnumbered females 274 to 252, and 31 people did not identify their gender.

The census found they ran the gamut when it came to where they spend the night: 1.4 percent squatted; 15.1 percent stayed on the street; 40.6 percent stayed with friends.

“A lot of people are one paycheck away from losing housing,” McDaniel said.

Susie Stuvland and Sean Ruud, fellow case managers, said the organization examined its methodology and added more volunteers to arrive at a more accurate picture of the area’s homeless situation. The effort included talking to school districts to find homeless students and going to where the homeless gather, from churches to The Salvation Army to the banks of the Umatilla River. They also worked on asking better questions and asking questions in better ways.

The higher number shows the area has greater needs than previously thought, Stuvland said, and that opens the door to more grant funding for CAPECO and other institutions to combat homelessness, including schools.

Ruud, Stuvland and McDaniel also are part of Home 4 Hope, a local coalition that helps the homeless. The group held its annual forum March 8 in Pendleton, where about 30 members identified key obstacles for the homeless and brainstormed solutions.

Previous forums helped hatch the idea of warming stations in Hermiston and Pendleton, and this time McDaniel said she hoped the forum would address two big hurdles for the homeless: a place to get mail and phone service. McDaniel said both are essential for people to connect to everything from employers to the Social Security Administration, which requires an address to receive benefits.

After almost two hours of discussion, the group agreed a drop-in day center could provide those benefits and more, including necessities and shower facilities.

Christopher Viking is a Home 4 Hope member and has lived on the streets after service in the Vietnam War.

“I went on the wrong track for a while then,” he said. “I call it a mental lapse.”

That lapse included riding railroad cars on the West Coast and a stint in federal prison, he said, before landing in Umatilla County since the late 1990s. A man of Christian faith, Viking said he feels a calling to volunteer to help homeless people obtain services from operations such as CAPECO.

The days of dining with hobos, he said, were far different from today’s homelessness. Now, he said, families huddle together in tents or back rooms, and Pendleton High School students sleep on the Umatilla River levee, bathe in park restrooms and trudge to classes. Viking said he supports the idea of a drop-in day center and what it could accomplish, but the most essential part starts with people. The center would need caring individuals who know how to relate to the homeless and can connect them to services.

The center also would not replace the overnight warming stations in Pendleton and Hermiston. Stuvland described the stations as vital to the communities and said a drop-in center would function during the day.

The Salvation Army just outside downtown Pendleton serves to some degree as a drop-in center, offering mail collection and free hot lunches to 50-100 people Monday through Saturday. Ricky Scruggs, the lieutenant in charge the local operation, estimated 25 percent of those are people with no home at all.

Scruggs said dealing with homelessness takes more than shelters and centers. Those are bandages, he said, while the deeper challenge is to engage people who are homeless and teach them to have a new relationship with finance.

Scott Scarbro, 37, ate lunch Thursday at The Salvation Army. He said he is homeless for the second time in his life. The first time he was 18 and his grandparents kicked him out of their West Virginia home.

“That was in the middle of a snowstorm,” he said.

Going it alone was hard, he said, and he found organizations such as The Salvation Army were essential. He also said he did a stint in jail for a felony, but that led to getting his life together and even gaining some education and welding skills.

Scarbro said he ended up in Eastern Oregon when he fled Texas after a bad breakup. The road trip ended about 60 days ago with a traffic stop near Hermiston that resulted in police impounding his rig and everything inside, including his clothes.

“I’m starting all over again,” he said.

He has no money and said he sleeps under a bridge. He said he tries to stay away from people because the public stereotypes homeless as mentally ill, addicts or both.

Viking said for many homeless, everything is about survival — about meeting the needs of the next hour or day. But Scarbro said he is looking further ahead. Tuesday he starts a new job at Keystone RV in Pendleton, he said, and The Salvation Army is helping him get clothes and arranging a shower at the Arrowhead Travel Plaza about six miles east of Pendleton. To get there, Scarbro can take free public transportation.

Home 4 Hope also is pushing for a better tomorrow. The group meets every other Thursday 2-4 p.m. at the First Presbyterian Church, 201 S.W. Dorion Ave., Pendleton. Stuvland said the conversations on the day center continues, and eventually will lead to committees to move the proposal forward. She also encouraged participation from community members and representatives of local governments.

“This is open to anyone who wants to be at the table,” she said.