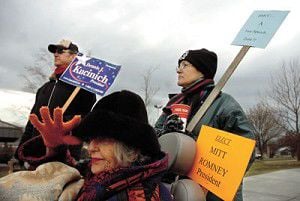 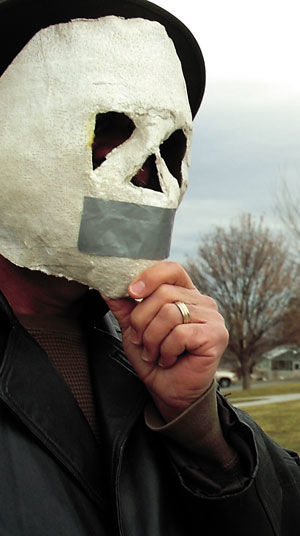 A small band local of activists Thursday afternoon raised the question of just how free is free speech at Blue Mountain Community College.

Ben Talley led a warmly-bundled band of four like-minded individuals during a short demonstration on the college's Pendleton campus. Some members held signs implying BMCC didn't allow free speech while Talley expressed the value of the freedom of expression and urged anyone around to contact the college's board of education to develop a policy regarding the posting of political notices or posters "that does not violate our First Amendment."

Thursday was the first day students could register for winter term classes, so the campus was nearly absent of students. During the demonstration, a lone man who appeared to be a student walked through the group with a slightly bewildered look on his face while he held a cell phone to his ear. He didn't stop or say anything.

Talley and crew had small yellow flyers with contact information for the college's board and administration. The flyers contained language from the college's policy that Talley pointed out as the most troubling:

"BMCC is a non-partisan institution, therefore, political posters or other partisan materials are not allowed to be posted on college building or grounds. Students however, are free to wear campaign buttons and post information in/on their cars."

The Pendleton campus has 25 places for people to place postings. A quick survey of the those in Pioneer Hall show most promote BMCC classes and programs, as well as other colleges and study programs. There also are flyers and a display in promoting the National Guard and U.S. military forces.

Political notices of any sort are absent from these walls. One flyer, however, does encourage students to participate in student government.

But BMCC Marketing Director Karen Hill said Talley was "a little unfair" because he selected only a portion of the college's policy and didn't include the following line: "The ASG (associated student government) web site maintains web links to political parties during the election season and are (sic) in charge of conducting voter's registration events, and scheduling candidate forums."

Hill said the college empowers the ASG to handle political forums and events, and because BMCC is a public entity and receives federal financial aid, the ASG must hold voter registrations. The ASG also sanctions student clubs of all sorts, including those affiliated with political parties. Hill said she isn't aware if there are any political student groups now.

Hill also said she was the primary author of the college's policy, and she created it from looking at many other similar polices. She said the college last revamped and updated its polices in 2000, and because the college has hundreds of policies, it's not a task it does routinely.

Hill also took exception to the signs Talley and company held that said BMCC was not a free speech zone, or that the administration didn't allow free speech.

But Talley said because of the college's location away from the heart of downtown and because there is no real student housing on campus, it's difficult to open the college to political actions and events. And the administration seems to have worked hard at keeping the place "tidy," he said.

But democracy isn't tidy, he added. The life of the mind requires interaction with other people's ideas, even ideas that conflict and raises questions.

"We can use more of that these days," he said.

Dan Lee of Pendleton was one of the demonstrators. He said he attended BMCC in 1990 and 1991, when the U.S. entered into the first Gulf War. He and other students who opposed the war went to the college administration, which Ron Daniels then headed-up, and requested a room on campus to hold meetings.

"We got approval, but everyone was very supportive," he said.

Lee said he and about 80 other people marched through Pendleton in protest of the war. Talley pointed out under BMCC's policy, the college might not allow a notice about that kind of event.

Hill said that isn't so. Groups can post notices about any public event or activity. She explained off-campus groups must obtain permission and an approval stamp from the college's office of instruction. And postings should have a time, date and place as well as contact information.

She also said postings should follow some degree of "common courtesy" such as not containing profanity.

Lee said as he has gotten older, he has come to appreciate just how free the Untied States really is. So free, he said, companies such as Enron can raid the American cookie jar.

But that kind of freedom also creates a marketplace of different ideas, and not all of them will agree. And that's just the point.

"It's a common denominator, it's what campus life is about - stirring up the pot," Lee said.

"I couldn't agree more," Hill said, adding that a college is one of the best places for discourse "around any kind of issue, any point of view."

She also contended all citizens should share Talley's concern about freedom of expression, and the college, like other public institutions, wrestles with the issue of the line between citizen rights and public employees.

Lee also suggested Talley query the administration about using a room on campus, for something such as an "Office of Peaceful Protest."

Talley considered that an excellent suggestion, and Hill agreed it would be something Talley could bring to the administration to discuss.