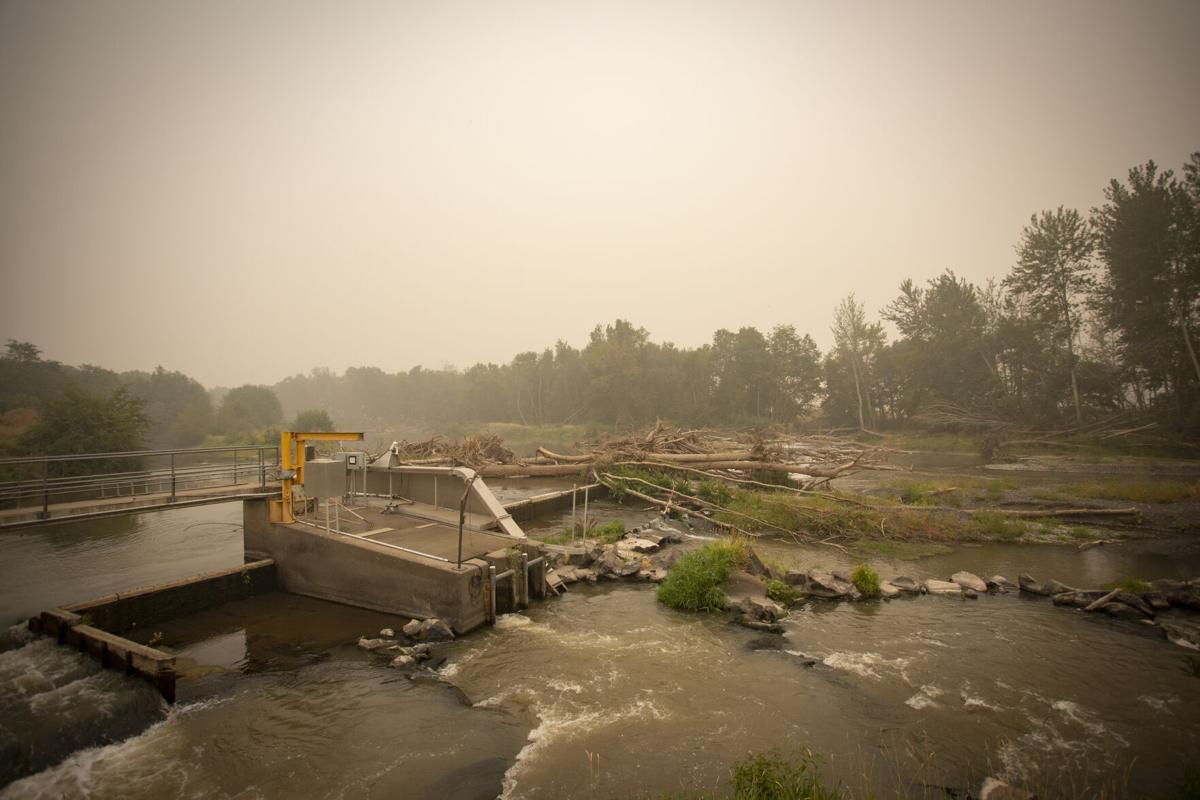 Debris clogs a Bureau of Reclamation dam on the Umatilla River along Ramos Lane near Echo. 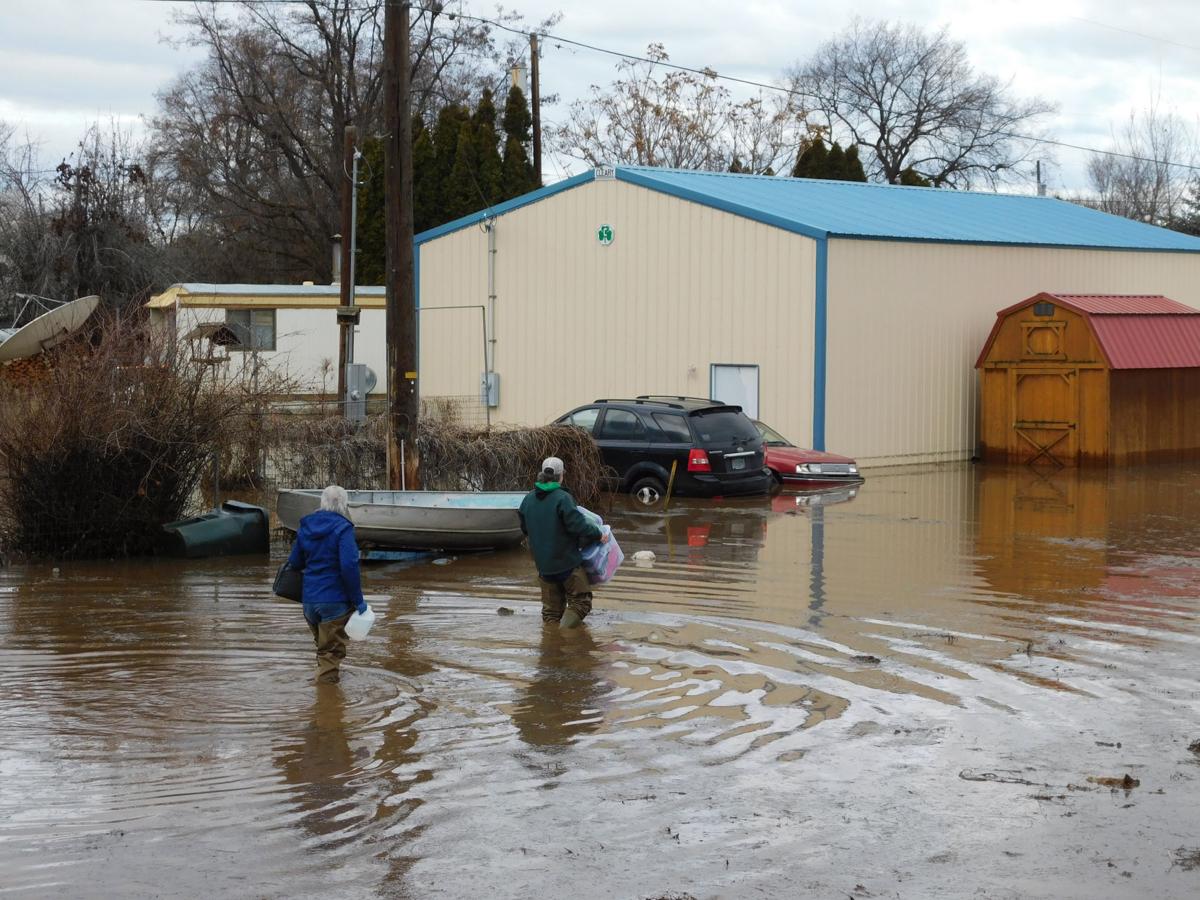 Shannon and Norman Rhodes of Hermiston help move Gerry Root’s belongings through floodwater after her Echo home flooded in February. 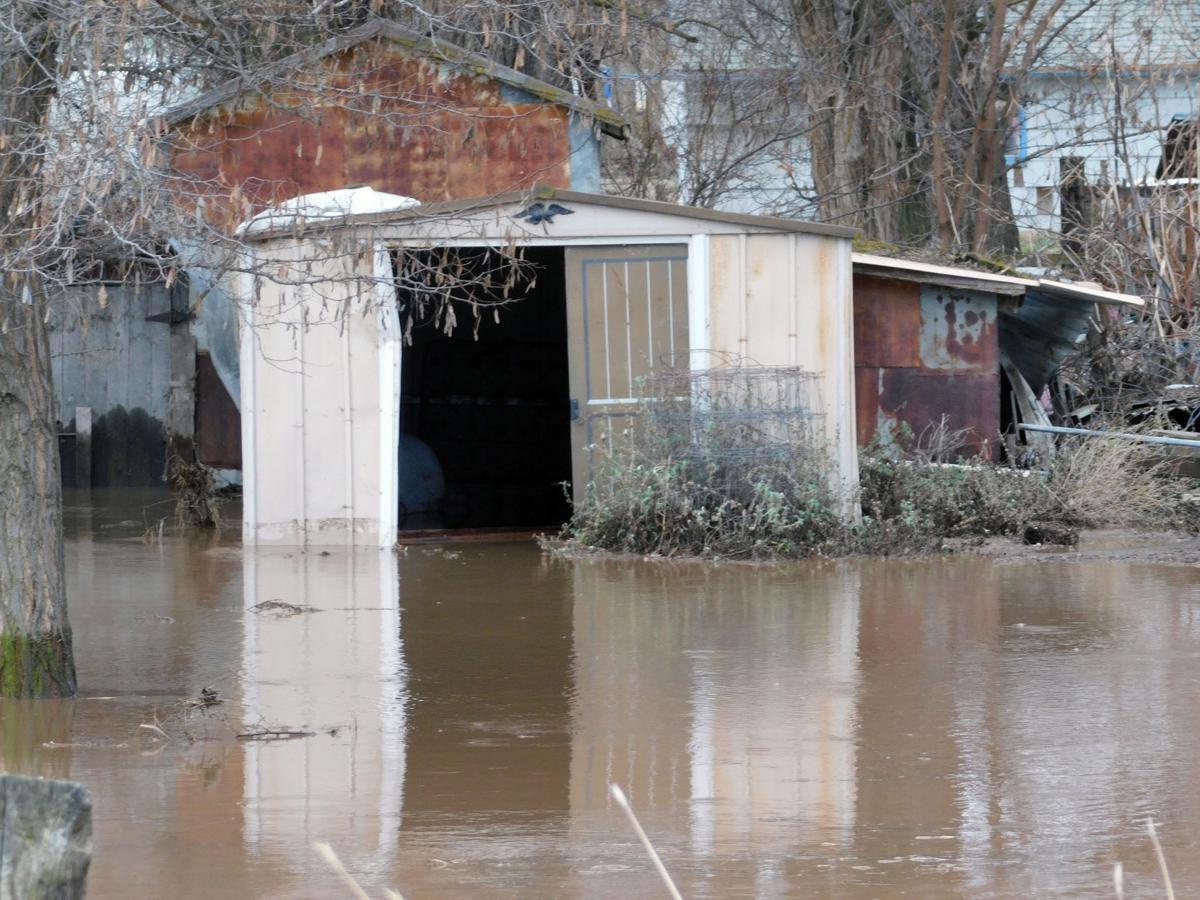 Flood waters cover a yard in Echo in February. 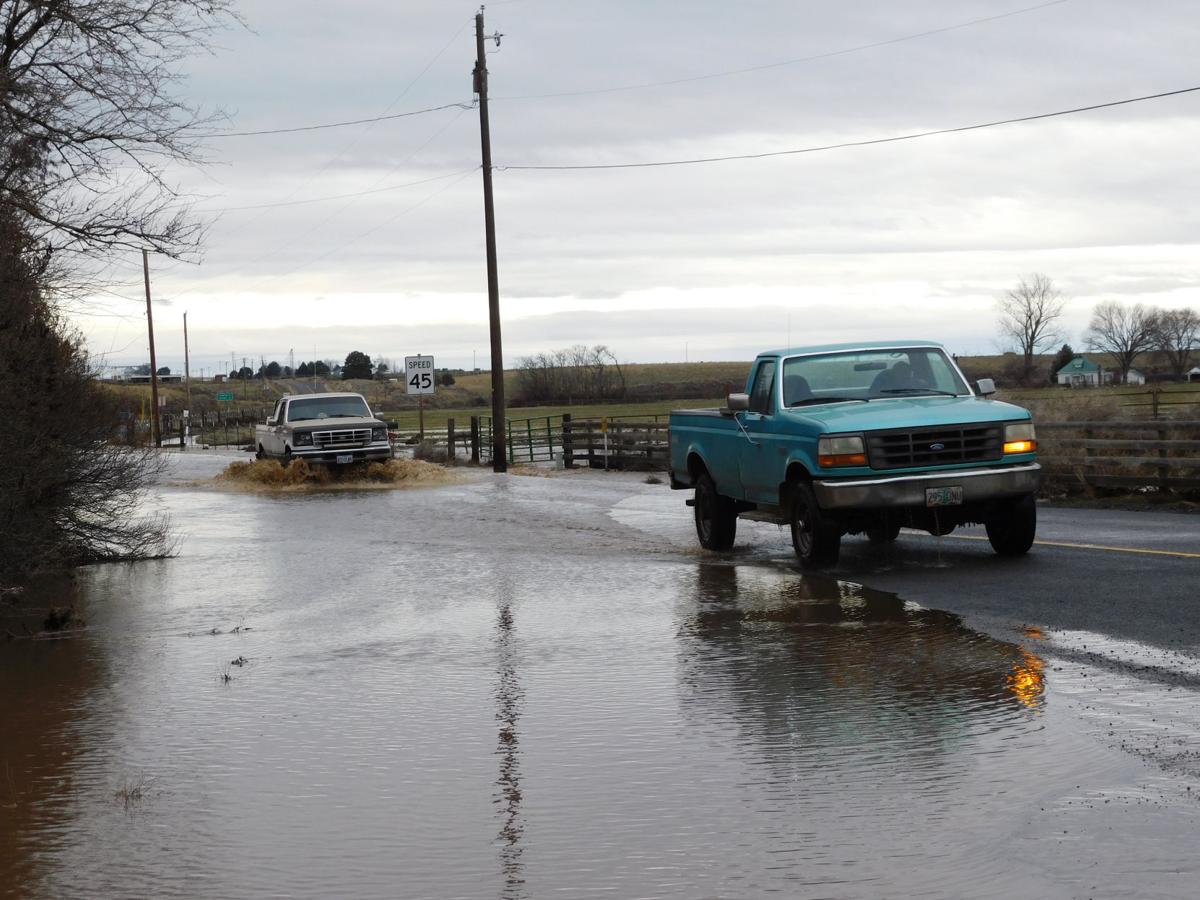 Trucks drive through a flooded road just outside Echo in February. 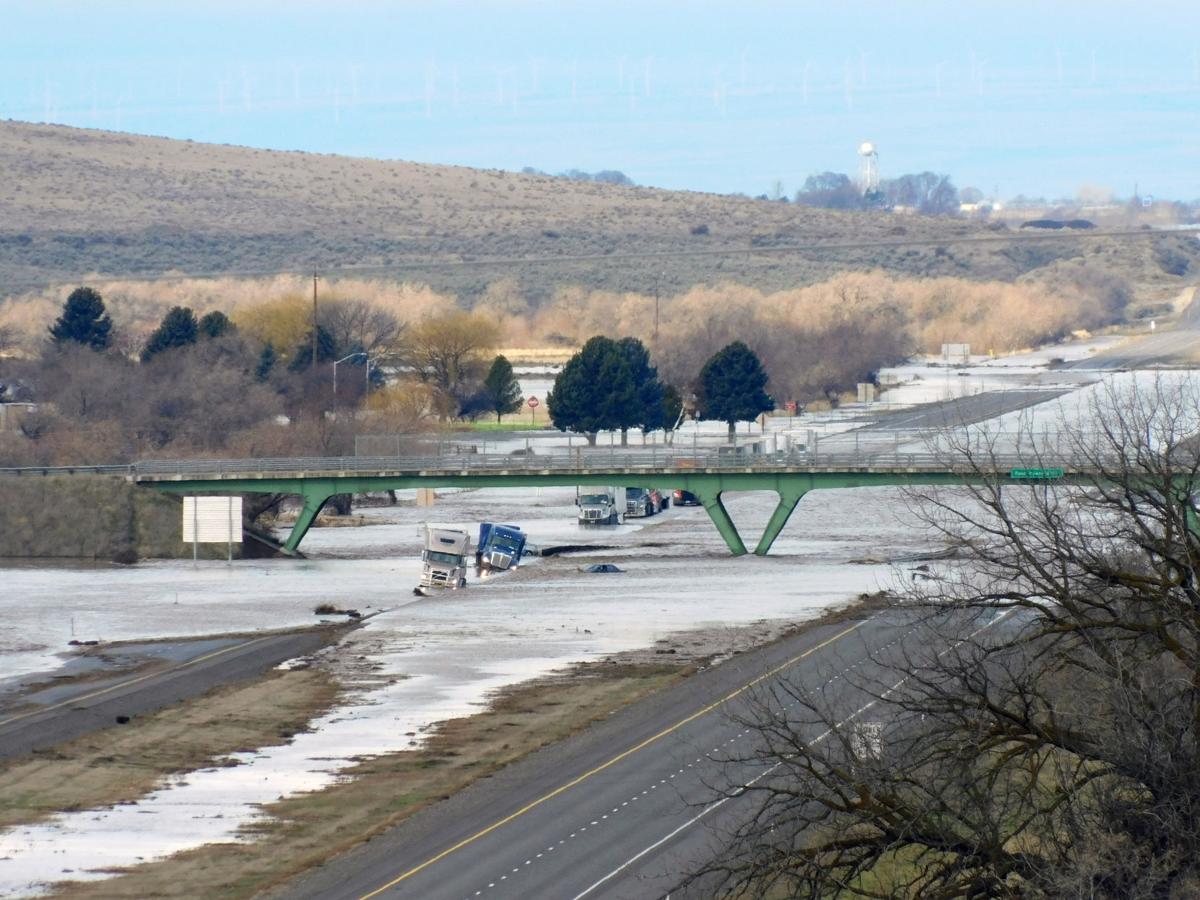 Trucks sit in flood water covering Interstate 84 just west of milepost 188 at the Pilot truck stop at Stanfield in February.

Debris clogs a Bureau of Reclamation dam on the Umatilla River along Ramos Lane near Echo.

Shannon and Norman Rhodes of Hermiston help move Gerry Root’s belongings through floodwater after her Echo home flooded in February.

Flood waters cover a yard in Echo in February.

Trucks drive through a flooded road just outside Echo in February.

Trucks sit in flood water covering Interstate 84 just west of milepost 188 at the Pilot truck stop at Stanfield in February.

ECHO — It should have been Umatilla County’s news event of the year. Of the decade. A top 10 of the century. But in a year where every month seems to bring a new once-in-a-generation event, the worst flood in the town’s 116-year history can feel largely forgotten by much of the state.

Echo residents remember, though. And they fear if they don’t band together to make their voices heard at the state and federal level, they will find themselves knee deep in water again next spring.

He said the Umatilla River’s flooding on Feb. 7 permanently altered the course and shape of the river around Echo, slicing new paths through farmland. The difference between aerial photos taken years ago and ones taken in 2020 are obvious, he said. A high-water event in May brought more flooding, and Slaght said he — like many Echo residents — believes that the changed landscape will make flooding in Echo more common.

Gov. Kate Brown has convened a state task force of stakeholders to address the flooding, but Echo and Stanfield-area property owners along the river have also formed the Mid-Umatilla River Coalition, or MURC for short.

Slaght said the coalition hopes the end result of their efforts will be soundly engineered projects along the river that prevent flooding while also protecting the river’s ecosystem.

Noel Ramos Scott, one of the leaders of MURC, said her family’s Echo farm has been dealing with flooding issues for “many, many years” but February’s flooding was unprecedented and created new weaknesses that they expect will result in worse flooding.

“We need to be proactive, and this is really a way to get legislators and Congressional committees and agencies and others to pay attention to us ... We need to look at a project for the entire reach of the river, not just plugging holes,” she said.

She said during what was previously considered the area’s worst flooding, in the winter of 1964-65, the Army Corps of Engineers was given permission to create levees along the Umatilla River near Echo. The project was funded under an emergency authorization, however, that meant that once the levees were built, they were the neighboring property owners’ responsibility and the Corps was no longer authorized to maintain them.

“Throughout the years, property owners have continued to maintain the levees,” she wrote in a fact sheet about MURC. “However, as the regulations have become increasingly more stifling, and geared solely to the habitat, maintenance as it needs to be has proven to be difficult. Several of the agencies’ regulations do not agree with others, and it is extremely difficult to get anything done. The application process is purposefully difficult, and expensive, with the specific intent that the individual will not go through the process.”

One of MURC’s goals is to push for a streamlined application process where agencies work together to come up with a single set of regulations for work done in stream.

MURC is one of the more than a dozen local, state and federal entities working together to develop flood management strategies across Umatilla County to mitigate future disasters.

Umatilla County Commissioner John Shafer is one of the county’s representatives on the task force, and said the experience of applying for permits in the recovery process from the McKay Creek flooding in 2019 has provided insight for how each entity can most effectively complete mitigation projects.

“We’re trying to streamline it so it’ll go a little bit faster and easier,” Shafer said. “So, if we need all these permits for the same stretch of water, why can’t we just get one permit? Those are the things we’re looking at now.”

Lloyd Piercy is one of the farmers who has been severely impacted by the February floods. He estimated he lost 6 to 8 acres of his farm when the river changed course, not to mention the “devastating,” widespread destruction of assets, such as blueberry bushes and trellises. It took heavy equipment and weeks of work by hand crews to clean things up, which the farm had to pay out of pocket.

“Our crop was probably half of what it should have been, and we spent weeks after weeks scooping gravel out of there, trying to make it farmable again,” he said.

Piercy said he wants to see the Bureau of Reclamation fix its berms near his property that washed away during the flood, and to clear the tree trunks and other debris off dams and canal diversions along the river that he said pushed water outward onto surrounding properties.

He said MURC was bringing together some “really energetic, bright people” to work on problems along the river, and he hopes the coalition is able to effect those changes and others.

“I’ve had flooding every year for the last four years; this is just the worst of it,” he said. “It really does need to be dealt with, and it can’t just be one farmer.”

While some spring flooding has happened to farms around Echo for years, February’s floods are being classified by government agencies as a “500-year flood,” meaning it was at a level expected only once every 500 years. The water moved beyond farmland and flooded homes and other buildings around the edges of Echo.

Slaght said the effects on Echo’s 700 residents still linger seven months later, even as the rest of the world turned its attention to the global pandemic that has also hurt residents.

“A lot of people are still recovering,” he said. “We still have a couple of homes that are not livable on the south side of town. There’s just only so much money to go around, and there was just so much damage.”

He said he believes if Interstate 84 had not flooded near Stanfield in the early morning hours of Feb. 7, the floodwaters would have continued through downtown.

“When the freeway was breached I was standing on the south end of town, and in a second the water went away and I wasn’t standing in water anymore, and then I heard screams for help on the radio from the freeway,” he said.

He said the interstate flooding was dangerous and he understood why the Oregon Department of Transportation would want to take steps to prevent it from happening again. But he hopes that projects along the river, including a levee restoration project by ODOT, will be steered by engineers who are looking at the entire river system and trying to avoid unintended consequences upstream or downstream.

Marilyn Holt, ODOT District 12 manager, said in an emailed statement that after the interstate flooded, the department restored the free space under the I-84 bridges around Pendleton, removed “thousands of yards of material” and rebuilt shoulders and ditches that had crumbled away along the parts of the interstate that flooded.

She said the department has two projects coming up near Stanfield to restore the levee near the interstate to “its original elevations” in order to keep the river channeled under the interstate during high water events.

“It’s important to note that it is designed for a 100-year event and the big flood was a 500-year event,” she said. “So, we will restore it to its original design.”