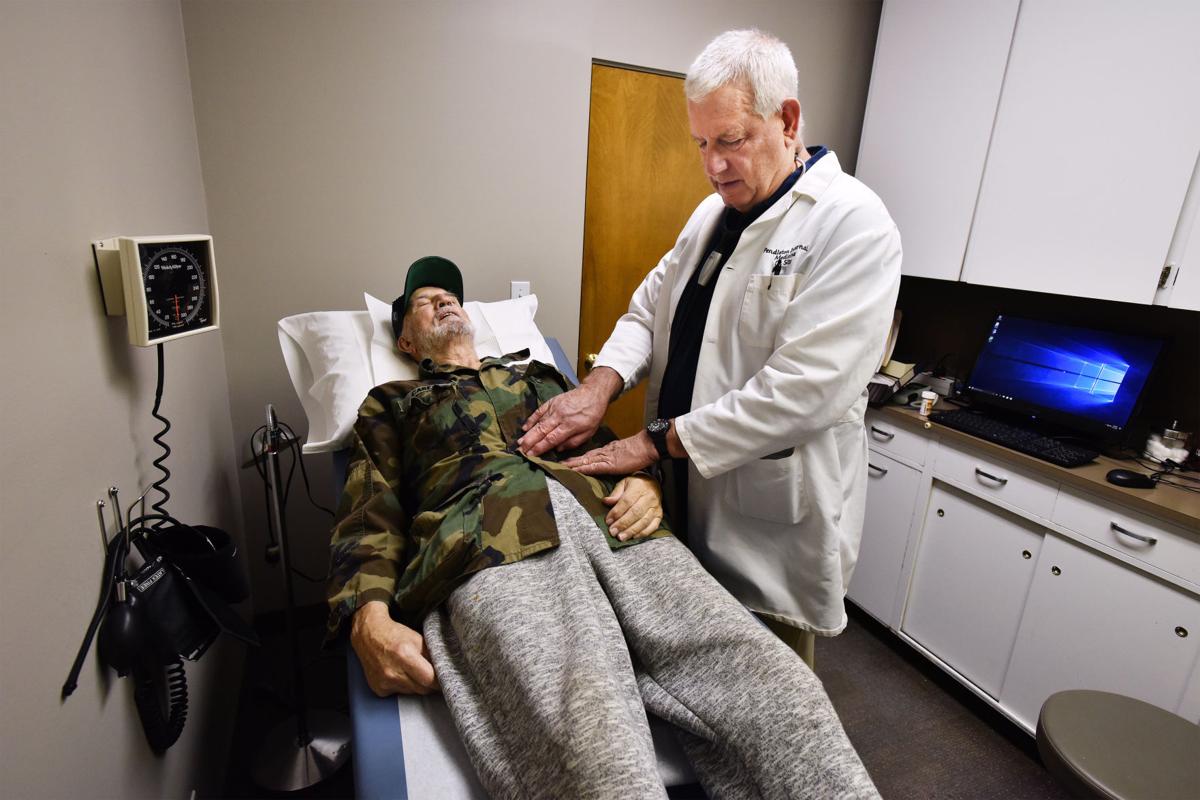 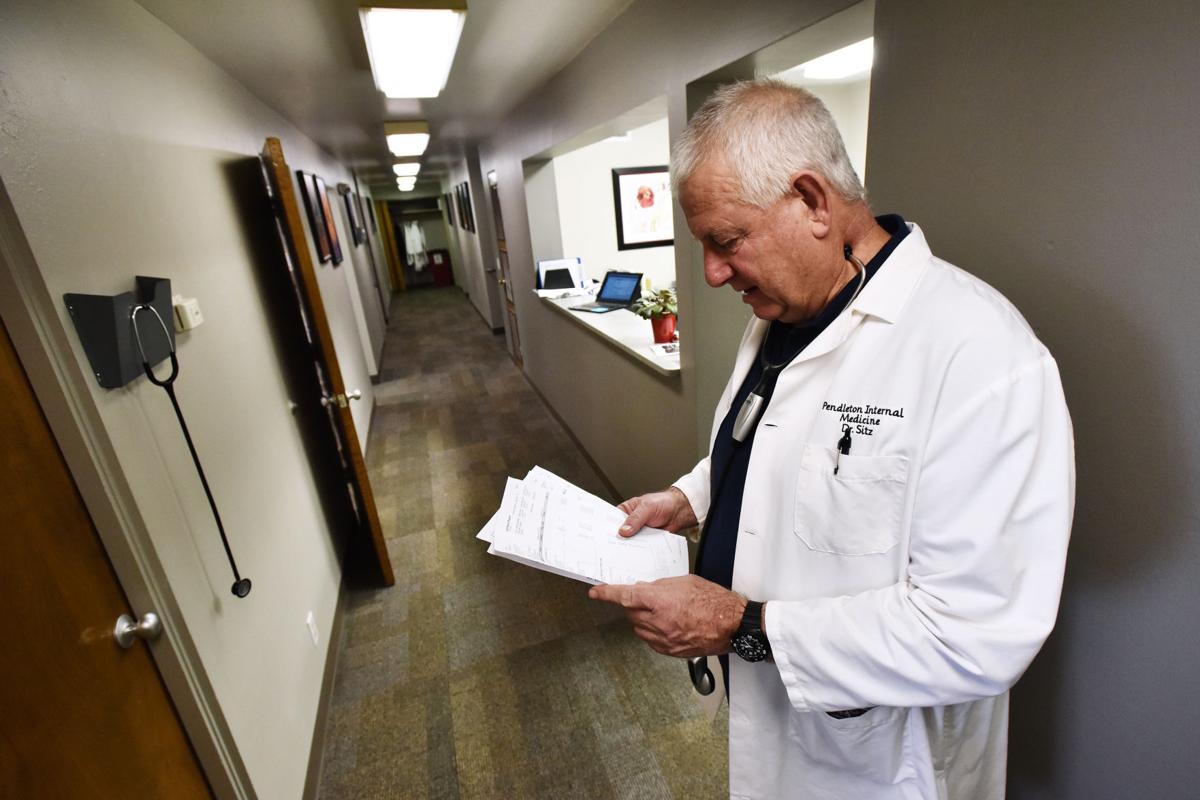 Dr. Norman Sitz checks a printout before visiting a patient on Tuesday at his medical office in Pendleton. 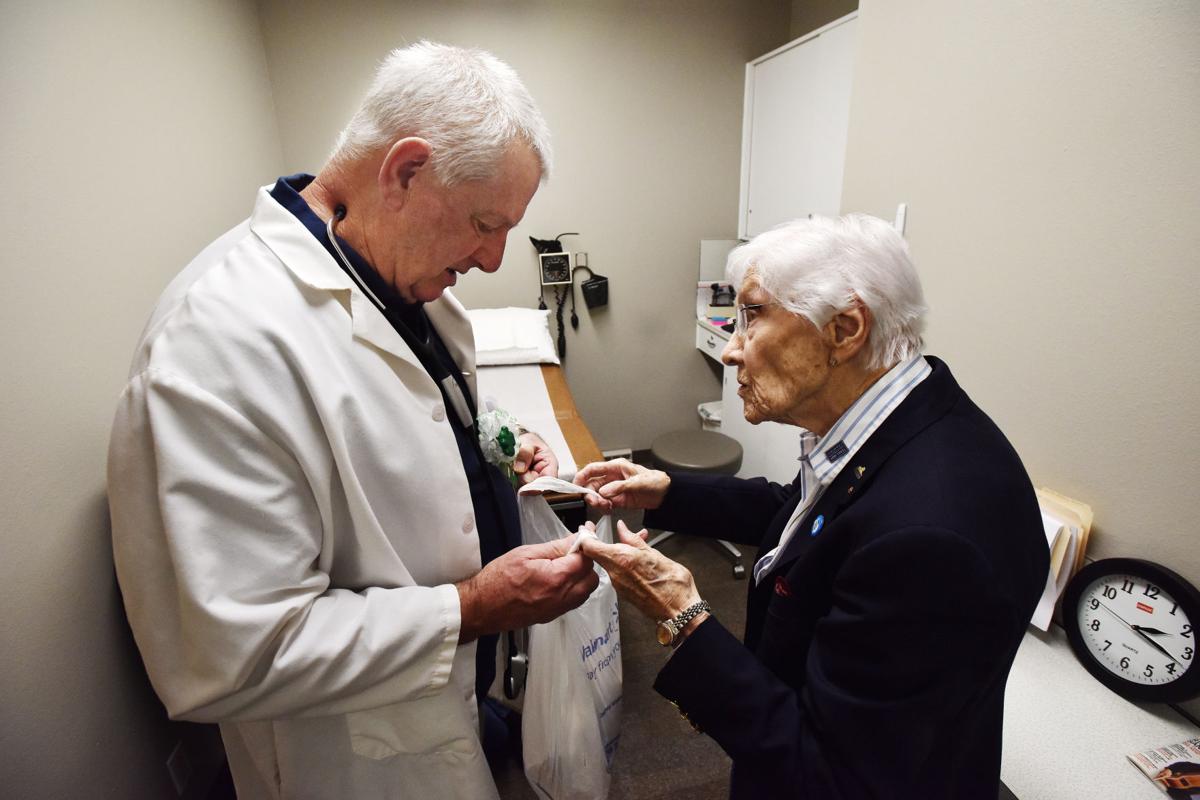 Long-time patient Dorys Grover gives a bag of books to Dr. Norman Sitz during a checkup on Tuesday in Pendleton. 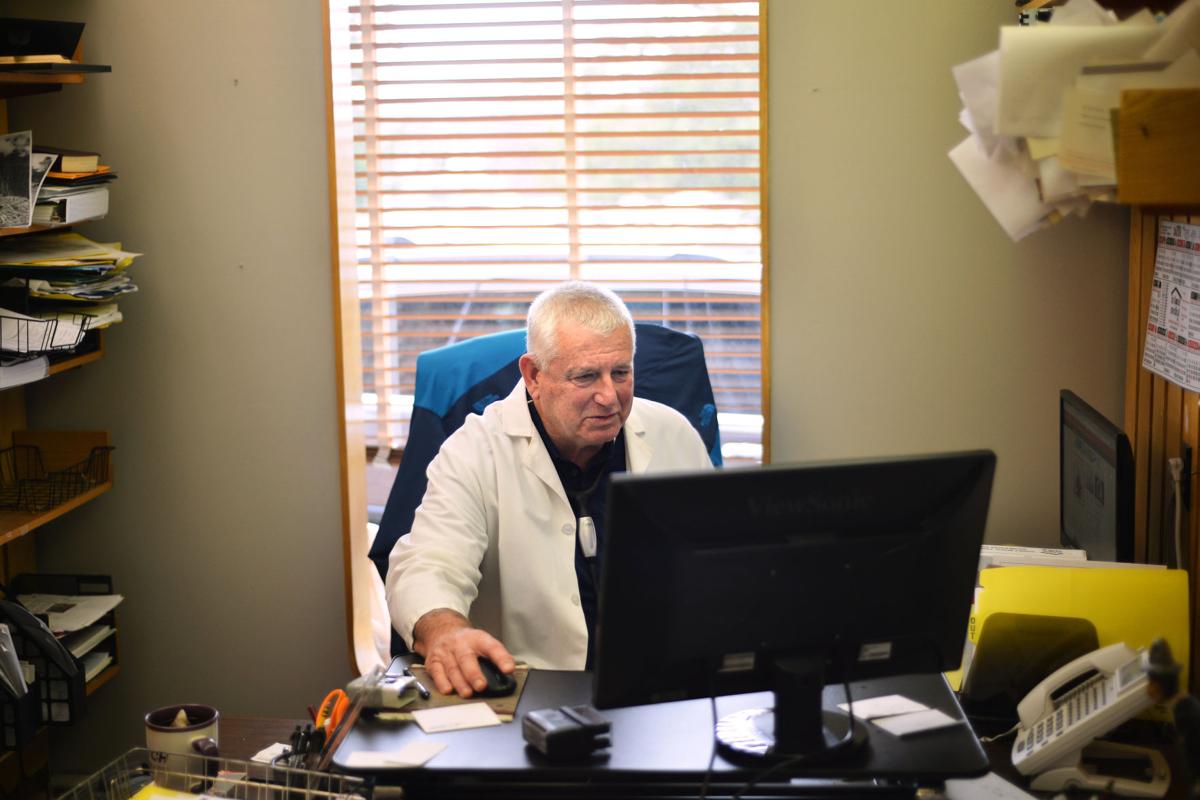 Dr. Norman Sitz checks a patient's medical record while working in his office Tuesday in Pendleton.

Dr. Norman Sitz checks a printout before visiting a patient on Tuesday at his medical office in Pendleton.

Long-time patient Dorys Grover gives a bag of books to Dr. Norman Sitz during a checkup on Tuesday in Pendleton.

Dr. Norman Sitz checks a patient's medical record while working in his office Tuesday in Pendleton.

Umatilla ranked a dismal 32nd of 36 Oregon counties for 30 health factors, falling one place from last year. A third of Umatilla County adults are obese, compared to the state rate of 26 percent. Eighteen percent of adult residents smoke. Teen births numbered 44 per 1,000 females aged 15-19, compared with the state’s 22.

The percentage of residents without health insurance fell from 13 percent in 2017 to 11 percent this year, but trails the statewide rate of 8 percent. Another area of concern is the ratio of primary care physicians. For each 1,960 Umatilla County residents, there is one doctor compared with the state’s 1,070-to-one.

The good news came in the report’s health outcomes category, which looks at length and quality of life. Umatilla County came in 15th, up from 16th in 2017.

The differing results may seem like a discrepancy, but not necessarily, said Racquel Bournhonesque, a county coach for the County Health Records & Roadmaps, which produces the annual study.

The key is to look for trends. She pointed for example to Umatilla County’s teen birth rate, which dropped from 51 births per 1,000 girls in 2017.

“Umatilla County is actually doing better than previous years. This number has gone down and down,” Bournhonesque said. “Even though the number is high, it has been declining in this county for more than a decade.”

Getting a snapshot of health care and assessing it properly can be headache-inducing.

“There isn’t one easy answer to the story in Umatilla County,” she said. “It is complicated. It’s not a simple picture.”

Relative improvement came in other categories, too. Fewer children live in poverty (19 percent compared with 26 percent in 2017) and a smaller percentage of adults are unemployed (5.4 versus 6.5 percent).

Still, Umatilla County Public Health Administrator Jim Setzer worries about certain health behaviors that seem to resist the efforts of educators. “Obesity and smoking — these are going to catch up with us.” Obesity has become normalized, he said, pointing to a graph that showed Umatilla County obesity trending upward over a decade, much like the trend for the state and nation.

“We’re fatter than the rest of the pack, but we’re all going in the same wrong direction,” Setzer said.

He urged people to not throw up their hands, but rather take small steps toward health.

Bournhonesque said the health rankings revealed health care gaps all around the nation.

“Not everyone has the same opportunity to be healthy,” she said. “The rankings show that where you live influences how well and how long you live.”

These gaps persist not only geographically, but by race and ethnicity, she said. The study, for example, drilled down into the number of teen births in Umatilla County and found that Hispanic teenage girls give birth at a higher rate than white teens (57 per 1,000 for Hispanics versus 37 for whites). Babies born to teenage Hispanic mothers also have a slightly higher risk of low birthweight.

Another factor, the number of children in poverty, could shed some light. While 19 percent of the county’s children are impoverished overall, 29 percent of Hispanic children live in poverty.

According to the rankings, the healthiest county in Oregon is Washington County, followed by Benton, Clackamas, Hood River and Deschutes. The five unhealthiest counties are Jefferson, Klamath, Lincoln, Josephine and Douglas.

To see the full report, go to www.countyhealthrankings.org.