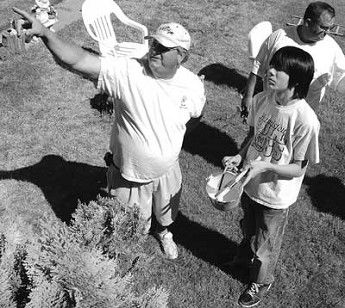 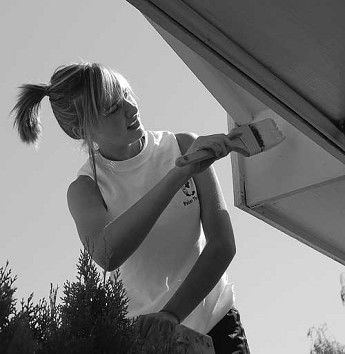 Kaylee Hunter, 14, paints an eave Friday morning at the Hermiston home of Dick Maslen as part of Banner Bank's Paint the Town project.

Kaylee Hunter, 14, paints an eave Friday morning at the Hermiston home of Dick Maslen as part of Banner Bank's Paint the Town project.

Dick Maslen got more than a transaction receipt and friendly smile during his recent encounter with Banner Bank.

More than two dozen people converged onto the Hermiston man's East Highland Avenue home Friday and Saturday as part of the Pacific Northwest based financial institution's Paint the Town project.

In addition to a fresh coat of paint on his house and fence, Maslen's deck was re-stained and his yard was spruced up.

"It's a lot of fun. It's not work," said Bill Frost, owner of the Frost Company. He and his brother, Bob, of Bob Frost Construction, supervised the project. "They have a good time down here - that's why I do it."

"I think it's important to help out the community. They (Banner Bank) have a good cause going," added Bob Frost.

Beth Earnest, a loan processor, agreed. And for good reason - Maslen is her father.

"I can't express how much we appreciate this," Earnest said as her voice started to crack.

Although the bank has participated in Paint the Town projects over the years, Earnest had never nominated her father as a potential candidate for the program.

However, with recent medical problems exacerbated by his diabetes, Maslen was the perfect candidate for the project.

Earnest's sister, Barb Maslen, has been working two jobs and been caregiver for her father - a task that's been a little more cumbersome after Dick had to have his right foot amputated last month.

"So, it means a lot to her - especially now," Earnest said.

Natalie Trotter, an administrative assistant, helped coordinate volunteers and logistics for the project.

"I just feel strongly about giving back to our community," she said.

And according to Bill Frost, no detail gets by her.

"Natalie called several times last week to ask me what I wanted for lunch," Frost said with a laugh.

Rather than heading to the bank Friday, Stacy Hunter, a credit analyst, grabbed a paint brush and her 14-year-old daughter, Kaylee, and helped with the project.

Hunter said not only was it nice to be outside, but a great opportunity to teach her daughter about giving back to the community - something she wasn't exposed to as a kid.

"It's always good to support people in the community. I want to make sure my kids have that experience," she said.

Maslen, himself, has been active in giving back to the community over the years - particularly through his membership with the Eagles and Elks clubs. Maslen has made his mark in Hermiston. He owned Jimmy's Flower Shop, a former Main Street business and retired after 29 years at Pendleton Grain Growers.

"He's been a customer at the bank for over 50 years," Trotter said.

Banner Bank, which calls its banking relationships partnerships and strives to not only meet their customer's needs, but exceed their expectations, have left Maslen nothing short of ecstatic.

"He's been telling everyone," Earnest said with a big smile.