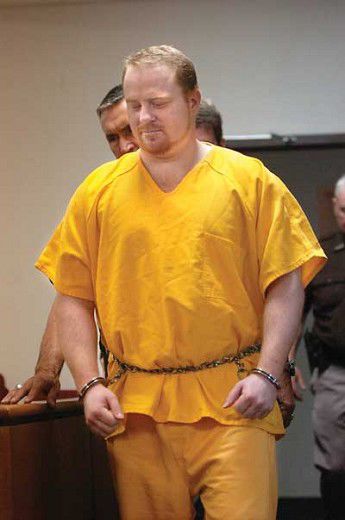 Arthur Wayne Blood is escorted into the courtroom of Judge Garry Reynolds for a hearing Monday at the Umatilla County Courthouse in Pendleton.<br><I>Staff photo by E.J. Harris 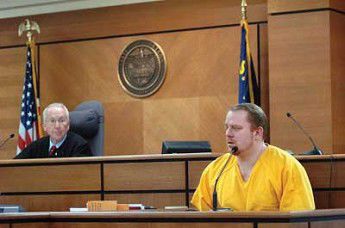 Arthur Wayne Blood takes the stand Monday as a witness in the courtroom of Judge Garry Reynolds at the Umatilla County Courthouse in Pendleton.<br><I>Staff photo by E.J. Harris

Arthur Wayne Blood is escorted into the courtroom of Judge Garry Reynolds for a hearing Monday at the Umatilla County Courthouse in Pendleton.<br><I>Staff photo by E.J. Harris

Arthur Wayne Blood takes the stand Monday as a witness in the courtroom of Judge Garry Reynolds at the Umatilla County Courthouse in Pendleton.<br><I>Staff photo by E.J. Harris

The state has accused Blood, 33, of sexually abusing underage teen girls, videotaping sex acts with them and later plotting to kill those same victims while he was in jail on sex crimes charges.

Monday's hearing was continued from Aug. 6. During that hearing, a recording of a police interview with Blood revealed he believes he can beat most of the sex crimes he's facing. Stephens wants to keep that tape and the letters out of any trial Blood may face.

Stephens tried to paint a scene that police had used an informant, Victor Marlette, to set up Blood.

Oregon State Police Detective Seth Cooney explained he had discovered a connection between Blood and Marlette, who had agreed to help police in the attempted murder case.

Cooney, a physically formidable presence wearing a red-ribbed T-shirt, said he had told Marlette what content to include in letters to Blood but to write the letters in his own words. He then told the jail staff to watch for the letters and any response from Blood. When Blood wrote back, jail staff saved the letter and gave it to Cooney.

Stephens said because Cooney dictated the content of the letters, the court should exclude the evidence.

Reynolds, though, said while Marlette was most assuredly a tool of the state, Blood had written back voluntarily.

Stephens then argued jail staff and police had exceeded their authority in searching Blood's mail and jail cell. Stephens called Blood to the witness stand.

In shackles, Blood could raise his right hand only a few inches to take his oath. Stephens instructed his client to not answer beyond the scope of the questions. Blood testified most of what the police took in the search was in a brown bag he had marked as "legal mail."

Blood also said no one at the jail told him staff would search his mail. But during cross examination from Umatilla County Deputy District Attorney Simonne Weyand, Blood admitted he had read postings about staff monitoring mail.

Weyand also showed copies of two papers OSP Detective Mark Banks said he found in the legal mail - one showed a drawing of a scantily clad woman and the other showed pornographic images. Blood had kept these, Weyand claimed, in the legal mail.

The state went so far as to have Banks open sealed evidence that revealed the drawings were in a manila envelope stamped "legal mail." Furthermore, that envelope also contained a copy of police report about Blood's sex crimes case and names, addresses, phone numbers and Social Security numbers of witnesses

Stephens, though, contended Banks had actually found the drawings under a mattress. The attorney asked Banks if he was sure he didn't find the drawings one place and then put them in another.

Why, though, Stephens asked, had Banks not taken only what could be evidence of the attempted murder case? How could Banks connect the sex crimes case to the other?

"I considered them as evidence," Banks stated. "I don't know how to say it other than that."

Stephens also focused on a food order form Cooney had taken during the cell search.

"On its face, a food order isn't contraband, it's not evidentiary in nature," Stephens said.

Cooney said the form was evidence to him because it matched another piece of paper that contained a code between Marlette and Blood.

As the clock creeped past 5 p.m., Reynolds said Stephens is going to make his position clear in a written motion. The judge gave Stephens until Sept. 11 to make the motion regarding the evidence. The state has until Sept. 23 to respond, and then Stephens will have until Sept. 30 to respond again. Then, Reynolds said, he will rule on allowing the letters or keeping them out of a trial.

Reynolds also set jury selection to begin Dec. 28, and Blood's trial to start on Jan. 4, 2010. If that goes forward, Blood will have been in the Umatilla County Jail nearly two years.