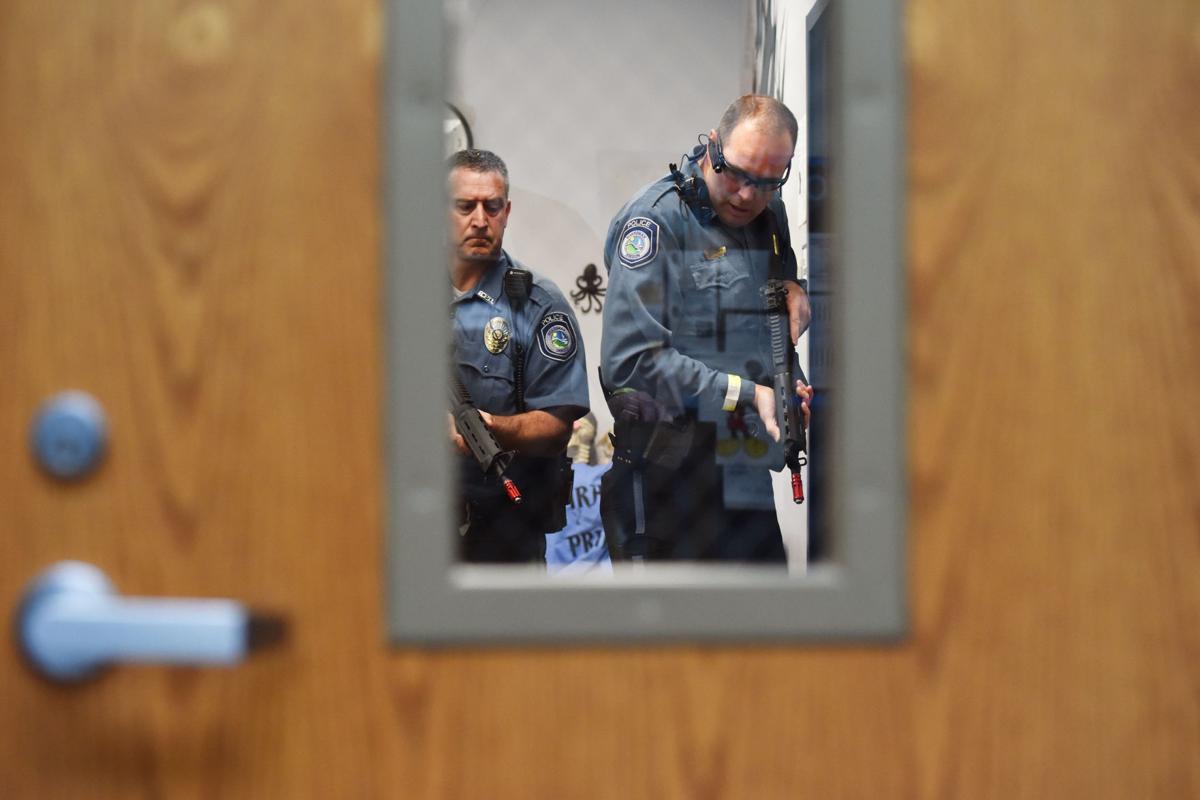 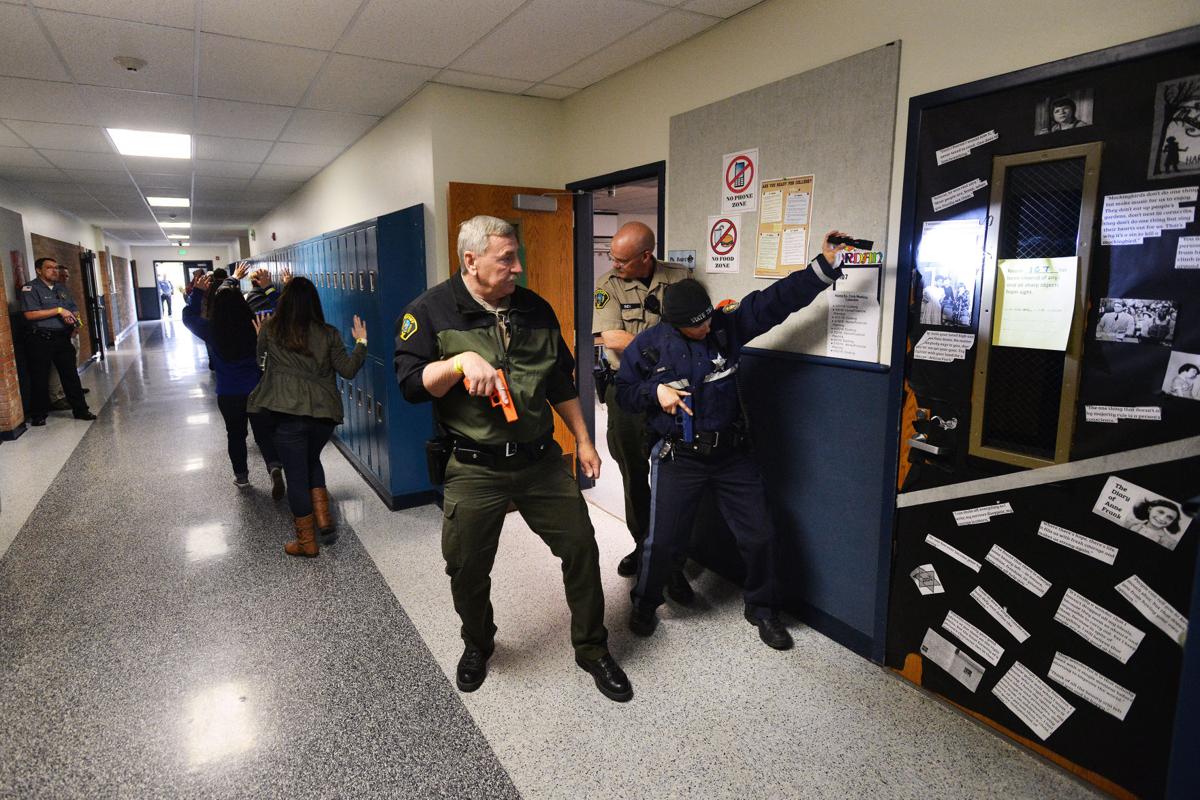 Staff photo by E.J. HarrisPolice officers from multiple agencies clear classrooms of victims during an active shooter drill on Friday in Boardman. 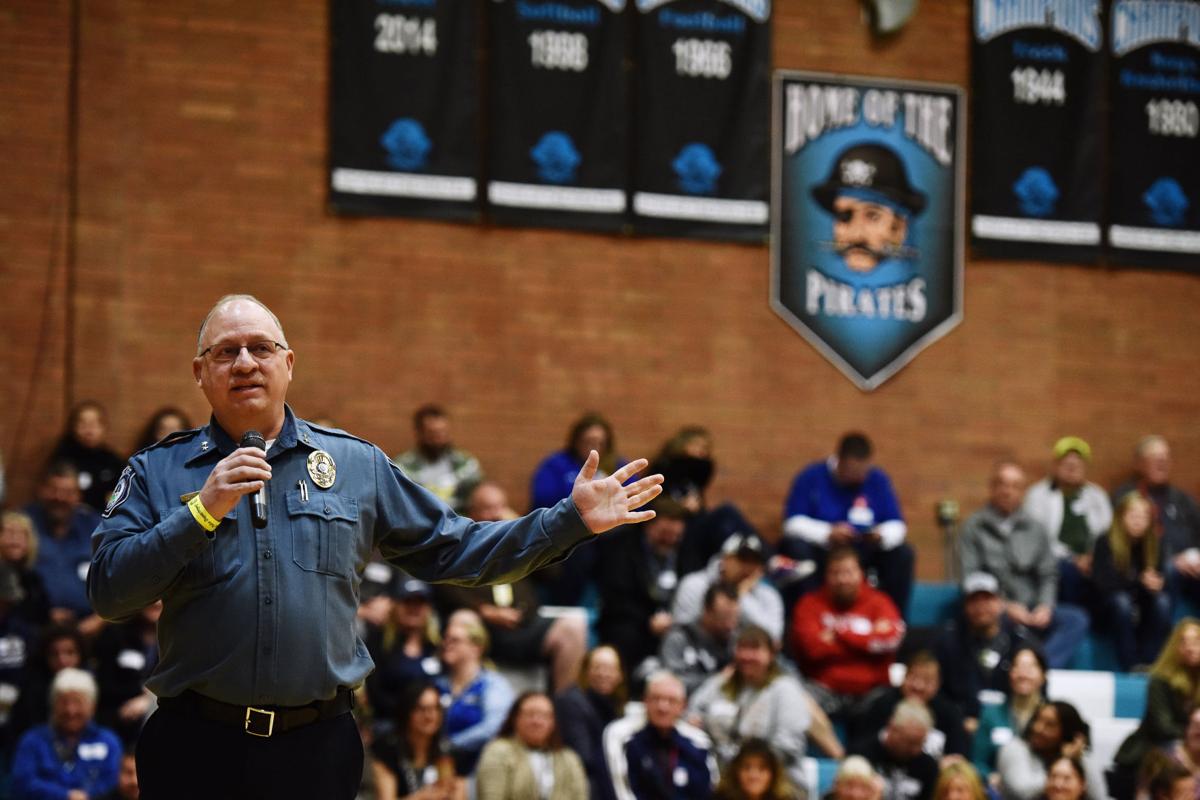 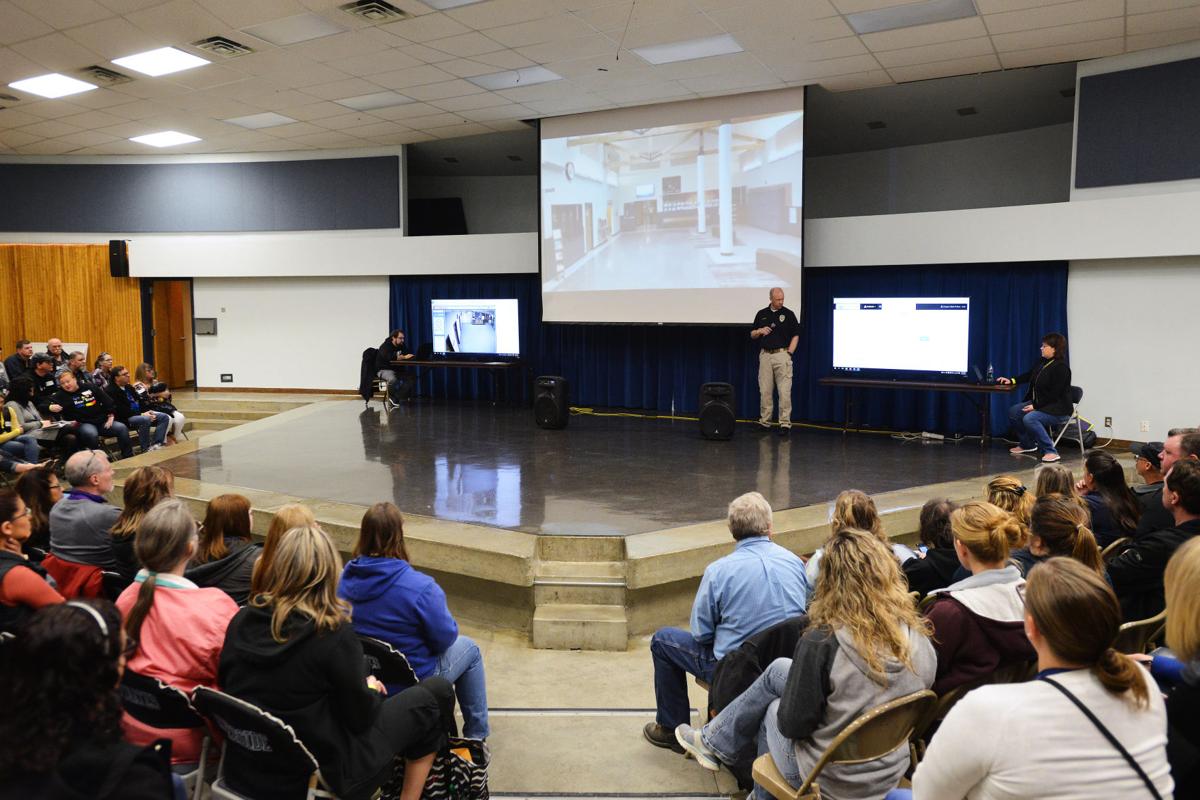 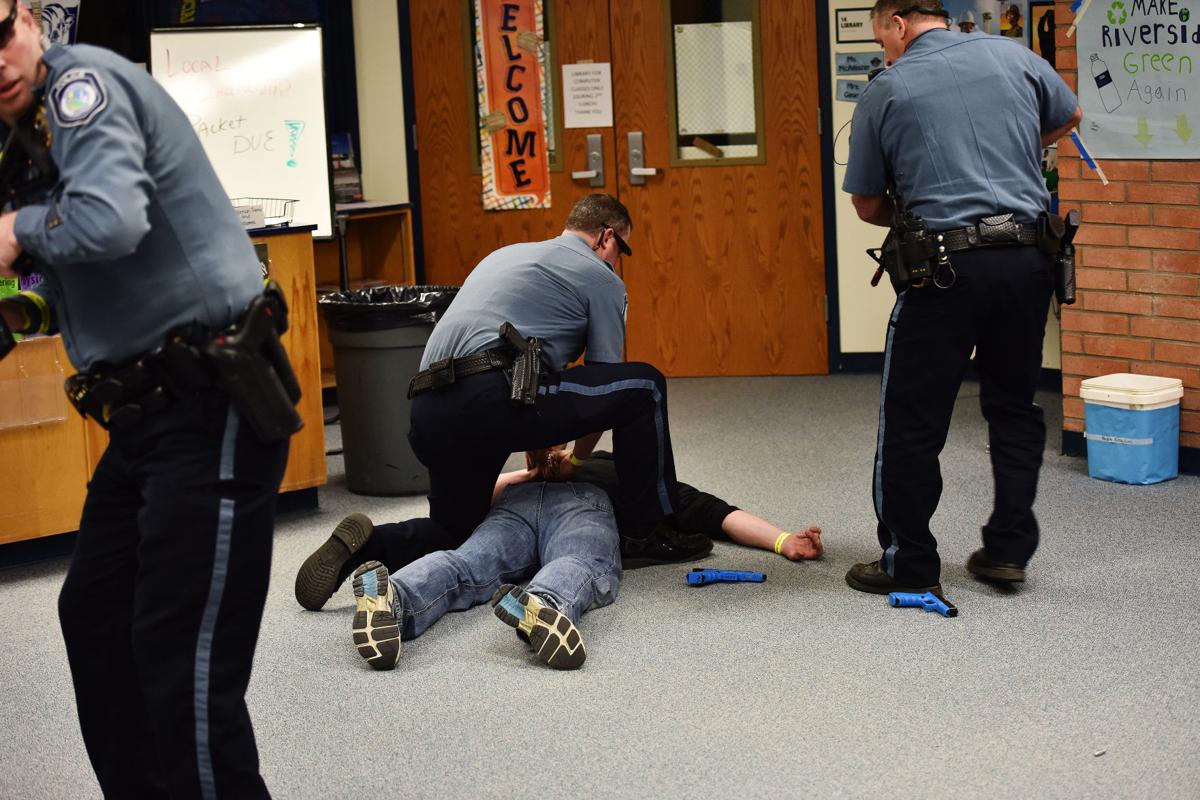 Staff photo by E.J. HarrisBoardman police officers take an active shooter into custody during an exercise Friday at Riverside High School in Boardman. 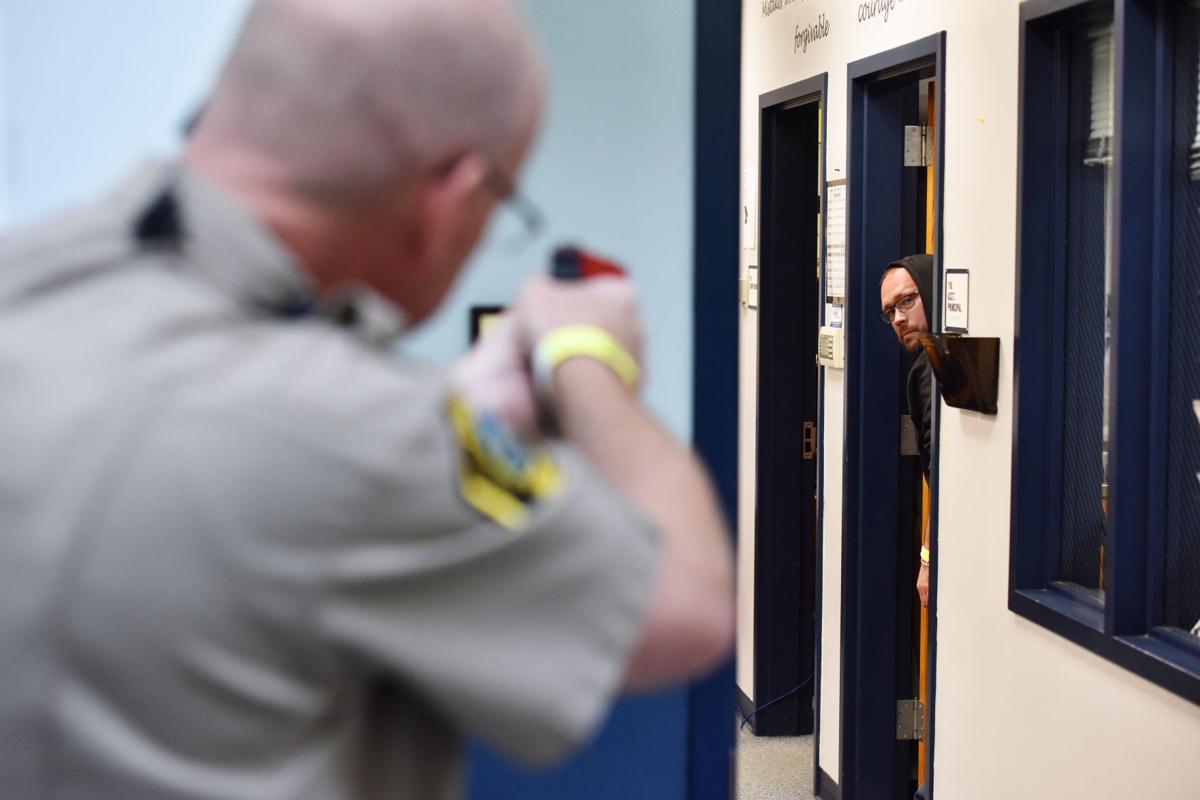 Staff photo by E.J. HarrisPolice officers from multiple agencies clear classrooms of victims during an active shooter drill on Friday in Boardman.

Staff photo by E.J. HarrisBoardman police officers take an active shooter into custody during an exercise Friday at Riverside High School in Boardman.

The student was tall, dressed all in black, strode into the main hallway at the Boardman high school and fired two rounds from a handgun.

No one was hit. Riverside Junior-Senior High School already was in lockdown. Minutes before the shooter entered Friday morning, an agitated father had taken the front office staff hostage.

Dozens of observers in the school’s auditorium watched all the drama unfold on TV and projection screens during the largest school shooter drill ever in Eastern Oregon.

Boardman Police Chief Rick Stokoe and Pendleton Police Chief Stuart Roberts organized the law enforcement end, while the Morrow County School District coordinated the education side. Staff from 18 school districts were on hand, along with representatives from eight law enforcement agencies, including the sheriff’s offices of Union and Morrow counties, and Boardman fire and ambulance services. Morrow County school students, staff and teachers volunteered to play various rolls. Almost 400 people in all watched or participated, including 45 students and 260 members of the school district.

Everyone gathered in the gym before the drill started. Stokoe announced only two people knew the whole scenario.

“This is going to be a surprise for everyone,” he said. “But not too big a surprise.”

And given all the drill was trying to accomplish, he said, “If it went off perfect, I would be amazed.”

Police checked every person — including each other — for weapons of any sort. Groups then headed to their destinations, be that school rooms or the auditorium. Roberts took the stage there as the narrator for the many observers while Stokoe stayed with police and observed their actions.

Roberts told the crowd the idea was to simulate as real a situation and response as possible. There were no rules, for example, prohibiting anyone from using smarthphones to broadcast or record what was happening.

In the drill, school officials and police first learned about a possible threat via the Oregon State Police school SafeOregon tip line.

Here is the timeline of what commenced. All times are a.m.

9:33 - A student sends a tip about seeing a social media photo of a possible student named Andy dressed all in black, wearing a hockey mask and holding a machete.

9:36 - School officials receive notification of the tip on their phones. The tip has a level of “standard” — schools should be aware but there is nothing to indicate an immediate threat.

Morrow County schools superintendent Dirk Dirksen is in his office in Heppner when he gets the message. Officials check in with each other.

9:41 - Second tip about the photo comes in, but this has a full name, Andy Jackson, and the tipster reports Andy made statements about wanting to cause harm today. Andy watched the movie “Friday the 13th,” a revenge horror flick where the bad guy wears a hockey mask and wields a machete.

9:44 - Dirksen gets second tip, but this time it’s “critical,” the most serious category. Local dispatch receives notice about this tip.

9:45 - Riverside goes into lockdown. An announcement tells students and staff to get in class, lock doors and turn out lights.

9:47 - A man comes into school and demands to talk to the principal. He states his son called him and said he was in danger.

9:49 - The man has a gun, takes over office and holds staff hostage.

9:50 - The tall figure in black enters the main hall and fires the first two shots.

9:51 - He moves down the hall and fires several more times. The first couple of local police enter the school.

9:52 - Dirksen lets staff know he is on the road and coming to Boardman. The drive from Heppner is about 45 minutes — without speeding — and lacks cell service most of the way.

More gunfire ensues. Officers hustle through the hall. Their police radios don’t work in that portion of the school.

9:52 - The school district publishes a notice about the lockdown on its website and Facebook page. The notice hits the school’s app on smartphones of parents and the public.

9:53 - Police shoot the shooter, but he is not killed. They get his gun away, cuff him and medics rush to his aid. The emergency personnel don’t know about the hostage situation.

9:57 - Police go to the front office and find the man barricaded in a room with hostages. The SWAT team from Pendleton is likely to respond, but it will take more than an hour for them to arrive.

10:10 - A member of the Morrow County Sheriff’s Office negotiates with the man and gets him to release some hostages.

10:12 - Oregon State Police SWAT is traveling to the scene, but they are at least two or three hours out.

10:21 - Other Boardman schools receive notice of the Riverside lockdown.

10:25 - Other Boardman schools go into lockout — that is, they lock their doors to keep others out but continue their school day as usual.

10:30 - The man surrenders and police arrest him. Officers continue to clear the school.

10:42 - The police team enters a science class, turns on the lights and finds students and staff hiding behind tables and desks. Police check them and lead them out.

10:57 - The district notifies parents they can pick up their children at Sam Boardman Elementary School.

Roberts said how he set up the scenario with multiple situations was “dirty pool,” but this was about learning.

One observer questioned how a teacher could know if a text from the principal was legitimate if he or she was a hostage. Another asked if staff should follow policy and make sure doors are locked when a killer could be stalking the halls. And students walked out of schools with books and backpacks instead of leaving them. Roberts agreed these are issues to discuss.

The biggest gasp in the observation room came when the audience heard how long state police SWAT would take to arrive. One man said there is SWAT in the Tri-Cities, Washington. Roberts said there are jurisdictional issues to consider if police come from another state, but he would take any police help he could in this situation and deal with the consequences later.

Mark Mulvihill, InterMountain Education Service District superintendent, called the drill something of a reality check. The event used only about 30 percent of the school, yet clearing just that much took longer than many expected. And while schools and students practice for these emergencies, he wondered if there was not more schools could do to inform parents about emergency responses and gain their trust.

Roberts said he has done something like that at just one school — Harris Junior Academy, the private Christian school in Pendleton. He said he advocated for forums where police and school administrators can answer tough questions from parents.

Stokoe at the end said there was plenty to assess from the drill, and that started with the immediate debriefing from the other officers who also were observers. He also said he understands school officials have the urge to get students away from the scene as quickly as possible, but police have to make sure the situation is safe before anyone leaves school grounds.