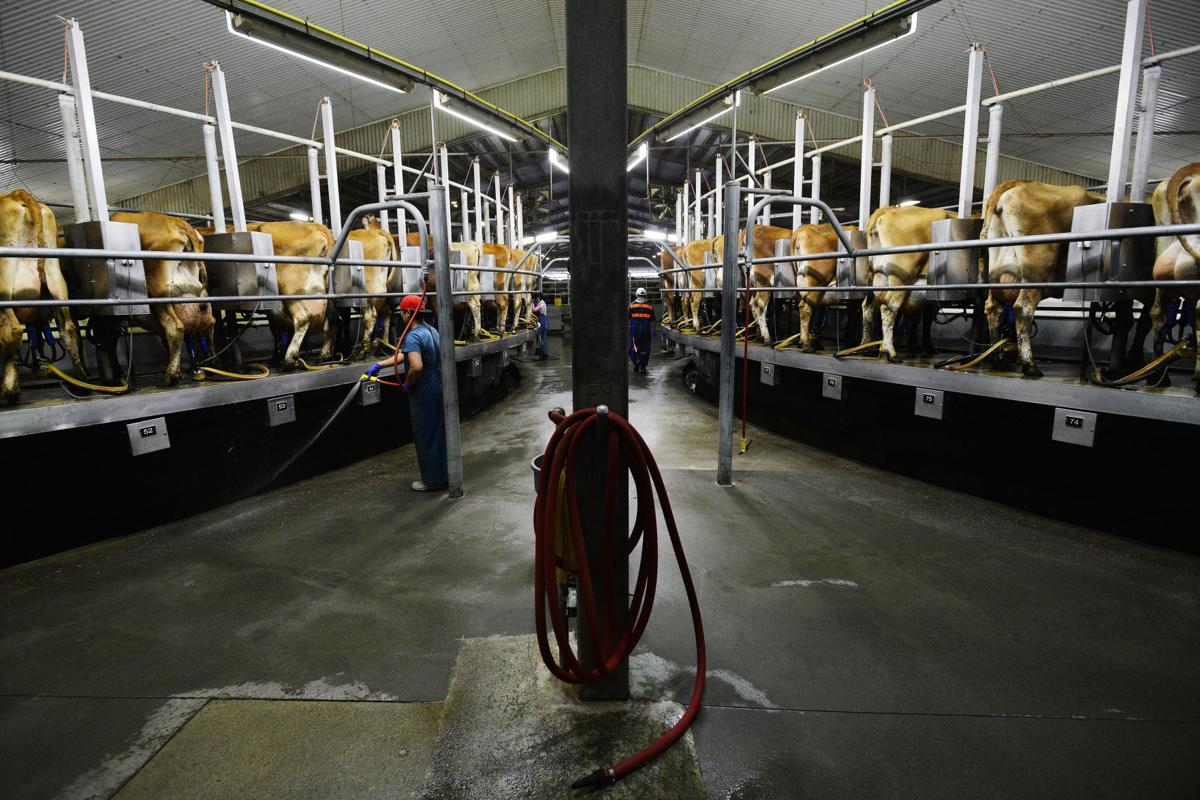 Twin carousels simultaneously milk 80 cows on each side while slowly revolving in the milking parlor at the Columbia River Dairy outside of Boardman. 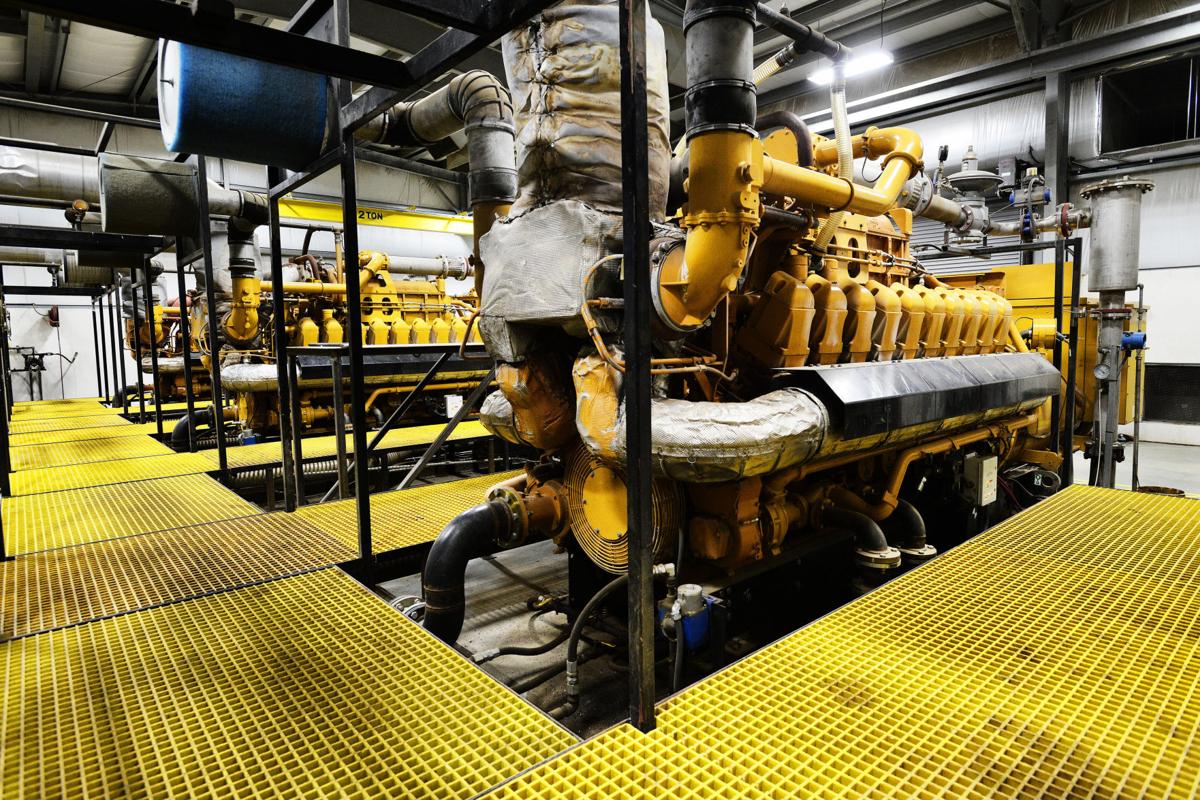 The three 2,000 horsepower engines in the powerhouse of the methane digester can produce 4.8 megawatts of power. 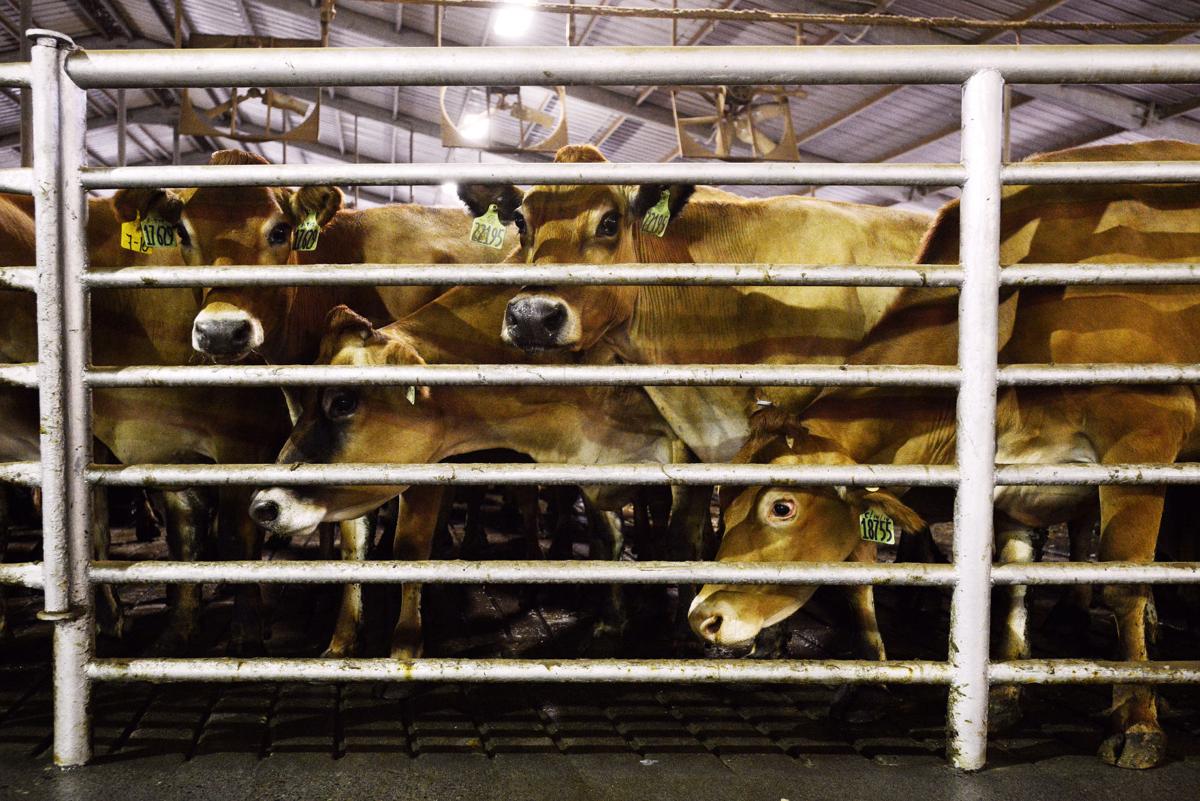 Jersey cows queue up to be milked at Columbia River Farms recently outside of Bordman. 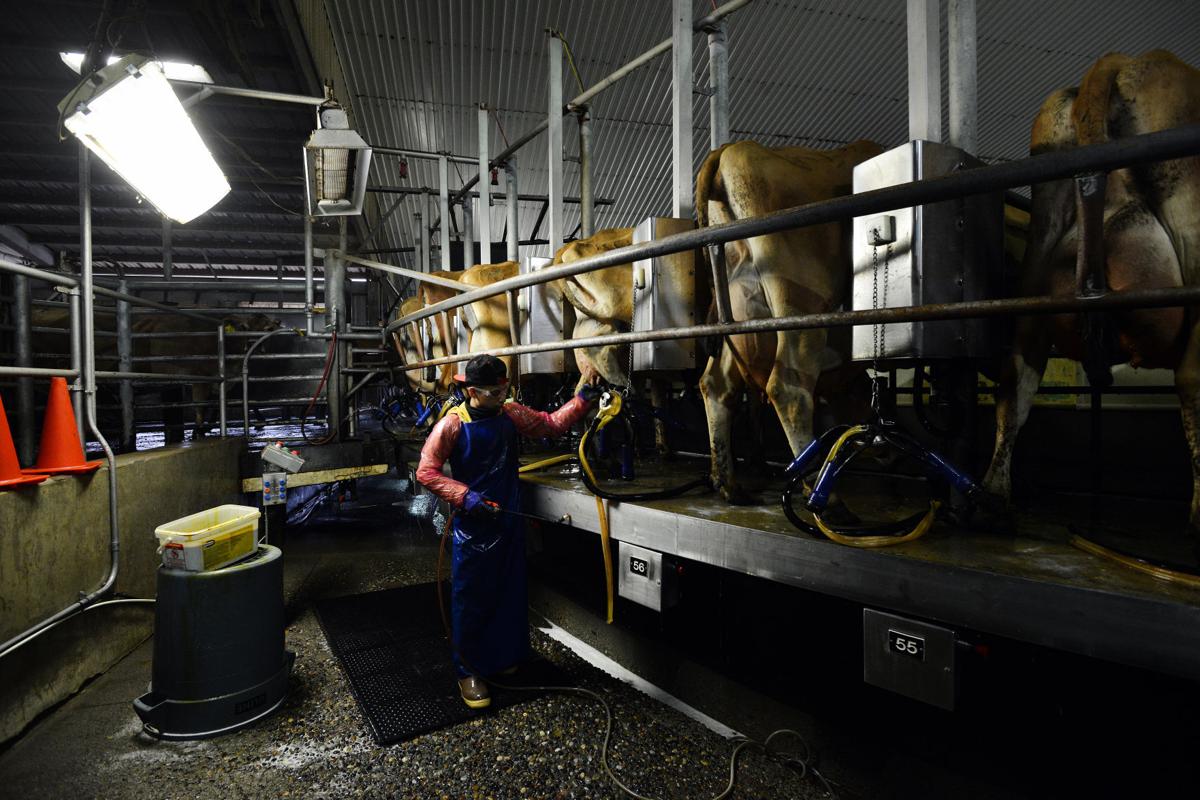 An employee disinfects the utters of Jersey cows as the load onto a milking carousel at Columbia River Farms outside of Boardman. 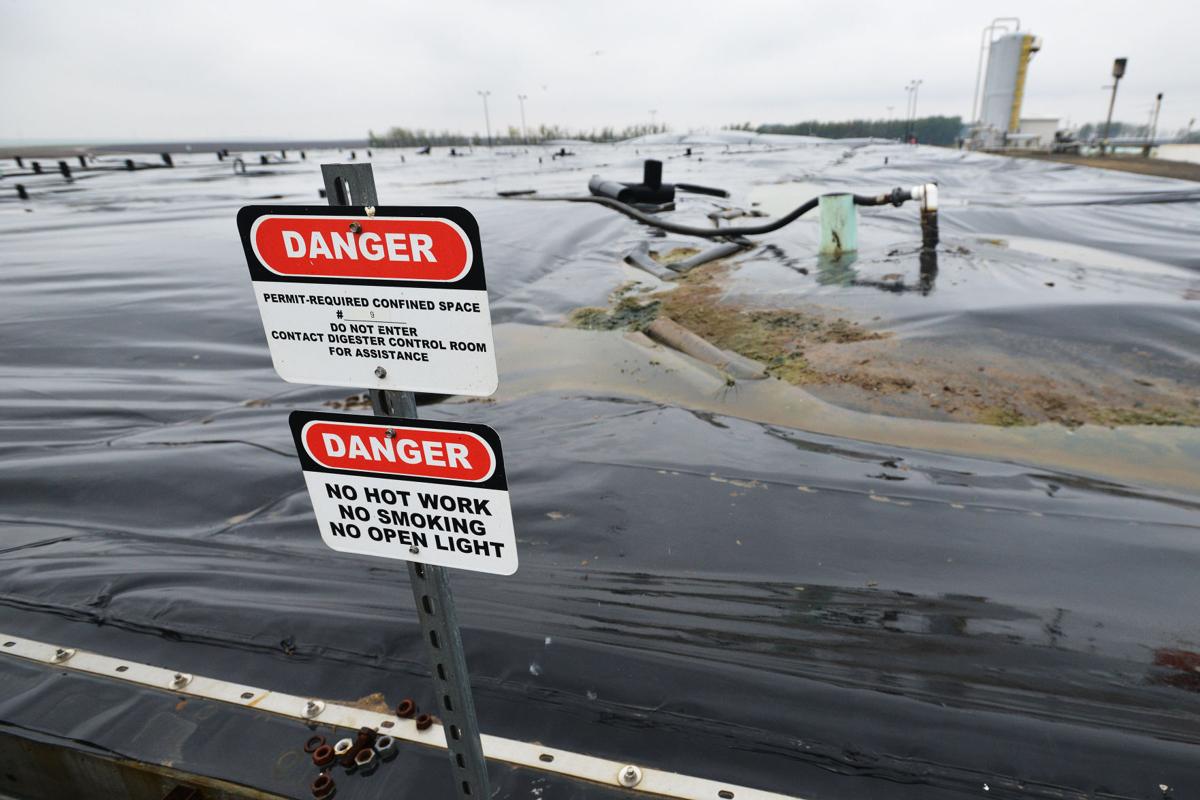 The methane digesters collect the gas from decomposing cow manure and use it as fuel for generators.

Twin carousels simultaneously milk 80 cows on each side while slowly revolving in the milking parlor at the Columbia River Dairy outside of Boardman.

The three 2,000 horsepower engines in the powerhouse of the methane digester can produce 4.8 megawatts of power.

Jersey cows queue up to be milked at Columbia River Farms recently outside of Bordman.

An employee disinfects the utters of Jersey cows as the load onto a milking carousel at Columbia River Farms outside of Boardman.

The methane digesters collect the gas from decomposing cow manure and use it as fuel for generators.

The milking parlor at Columbia River Dairy is a large, warehouse-like building where cows arrive twice a day to be milked by modern machinery.

First, the animals are loaded onto slowly rotating carousels where their udders are sprayed with a disinfectant and attached to automatic pumps. Each spin lasts just a few minutes before the cows are unloaded back where they started. The process is smooth, continuous and efficient.

Outside, Milky Way trucks are waiting 24/7 to deliver milk from the dairy — part of Threemile Canyon Farms — to Tillamook Cheese, which runs a cheese-making plant at the nearby Port of Morrow. With 26,000 milking cows producing 170,000 gallons every day, there is always lots to do.

Threemile Canyon is, by far, the largest dairy operation in Oregon. The herd totals 70,000 total cattle, including calves and heifers. Located on 93,000 acres in rural Morrow County, the farm also grows a variety of conventional and organic crops, such as potatoes, onions, corn and wheat.

Now, another mega-dairy is looking to expand in the county, which is raising questions about water and air pollution in the surrounding communities. Willow Creek Dairy, which has leased land from Threemile Canyon since 2002, wants to strike out on its own and add 30,000 cows on part of the former Boardman Tree Farm.

More than 2,300 comments have poured in on the proposal, mostly in opposition. Environmental advocacy groups argue that Willow Creek would produce as much waste as a mid-size city, and regulations don’t offer enough protection. They also question the wisdom of having two large dairies so close together.

But Marty Myers, general manager for Threemile Canyon, defended their management practices, which he said are forward-thinking and sustainable.

In fact, Myers said the size of Threemile Canyon allows them to do things that wouldn’t be practical for a smaller dairy farm.

By growing crops and raising cows all in the same place, the farm is able to recycle its own waste to use as fertilizer in the field. That, in turn, creates more feed for the animals, thus completing the closed-loop system.

“We get big beneficial uses out of that cow manure,” Myers said. “It’s not a negative for us. It’s a positive.”

It all begins with the cows. Threemile Canyon dedicates between 20,000 and 25,000 acres to growing feed crops, such as grain corn and a hybrid wheat known as triticale. Everything is harvested and stored for the animals to eat year-round.

Once the heifers are two years old, they are ready to be milked. Of course, they are also producing waste throughout their lives — roughly 436 million gallons of liquid manure every year. Per Oregon rules for confined animal feeding operations, or CAFOs, none of that material can be discharged into surface water or groundwater.

At Threemile Canyon, free-stall barns are flushed regularly into a concrete collection basin, and from there pumped into a methane digester at the farm. The digester then heats the waste at 100 degrees and bacteria breaks it down into a gas. The gas is then burned to drive three 2,000-horsepower engines capable of generating 4.8 megawatts of power.

Myers estimates the facility, which was built in 2012, removes 60,000 tons of carbon from the atmosphere annually.

From there, about half of the leftover solids are made into animal bedding. The other half is used for organic fertilizer. The liquid is pumped into one of three lagoons, which is treated and run through irrigation pivots to grow more conventional crops and feed.

“Our average time in that lagoon is 10 days,” Myers said. “We’re applying that year round to growing crops. ... We never let it become anaerobic. That reduces air emissions.”

Threemile Canyon is located within the Lower Umatilla Basin Groundwater Management Area, where the level of nitrates in the groundwater already exceeds the federal safe drinking water standard. According to the Oregon Department of Environmental Quality, the primary source of nitrogen in groundwater comes from fertilizer, with irrigated agriculture making up 81.6 percent of the problem.

Opponents of mega-dairies are concerned about adding a second operation so close by, comparing it to a “sewer-less city.” Oregon CAFO permits also lack surface water monitoring required under the federal Clean Water Act, they argue.

Myers said the fertilizer that is applied onto the farm’s own crops is mixed at precise rates to ensure nothing leaches into water supplies. Employees regularly test the manure to keep tabs on the nutrient level, and will apply only as much as the crop will use for nutrition.

That’s easier said than done. Phil Richerson, a hydrogeologist for DEQ in Pendleton, said the soil in the area is coarse, making it difficult to keep irrigation from seeping down below the plant’s roots.

Don Butcher, who manages water quality permits for DEQ in Pendleton, said the problem isn’t just limited to CAFOs. More land is being converted to grow vegetable crops. And more food processors are popping up to turn those vegetables into high-value products.

“With all the expansion and change in the Groundwater Management Area, we are concerned,” Butcher said. “We still have an increasing nitrate trend.”

Butcher said DEQ works closely with the Oregon Department of Agriculture, which enforces CAFO permits for the state. Wym Matthews, CAFO program manager for ODA, said they generally conduct routine inspections of facilities once every 10 months.

However, due to the size of Threemile Canyon, Matthews said that farm is inspected once every five or six months. The most recent was in July. Over the past decade, he said the dairy has been issued six water quality advisories — essentially a warning — and two notices of noncompliance, meaning they’ve violated a condition of their permit.

In every case, Matthews said the problem was dealt with quickly. Overall, he said he believes the management practices at Threemile Canyon are thorough.

“If they see an issue, I think they do a very good job to bring it to our attention and repair it,” Matthews said.

In addition to environmental practices, Myers said Threemile Canyon is subject to a three-layer approach to animal welfare.

Last year, Myers said Columbia River Dairy was the first in the country to receive a perfect score from Validus. They also consistently scored 95 percent or better on how they treat their heifers, he said.

Along with voluntary audits, Myers said the dairy works regularly with its own animal advocate, a veterinarian and professor at Evergreen University. Along with the farm’s own animal welfare committee, they make recommendations on how to improve practices.

“It’s not a static process,” Myers said. “It’s a continual improvement process, and we’re proud of that.”

Greg te Velde, a California dairyman, is the owner of Willow Creek Dairy, which has applied for its own CAFO license under the name Lost Valley Ranch.

Myers has testified in favor of te Velde and his longtime tenant. Myers said he believes they too will be dedicated to best management practices. A similar lagoon and land application system is proposed at Willow Creek, and though a methane digester is not in the immediate plans, it could be phased in later down the road.

“They know how to do things right,” Myers said.

The public comment period for the Willow Creek/Lost Valley CAFO has been extended through Nov. 4.