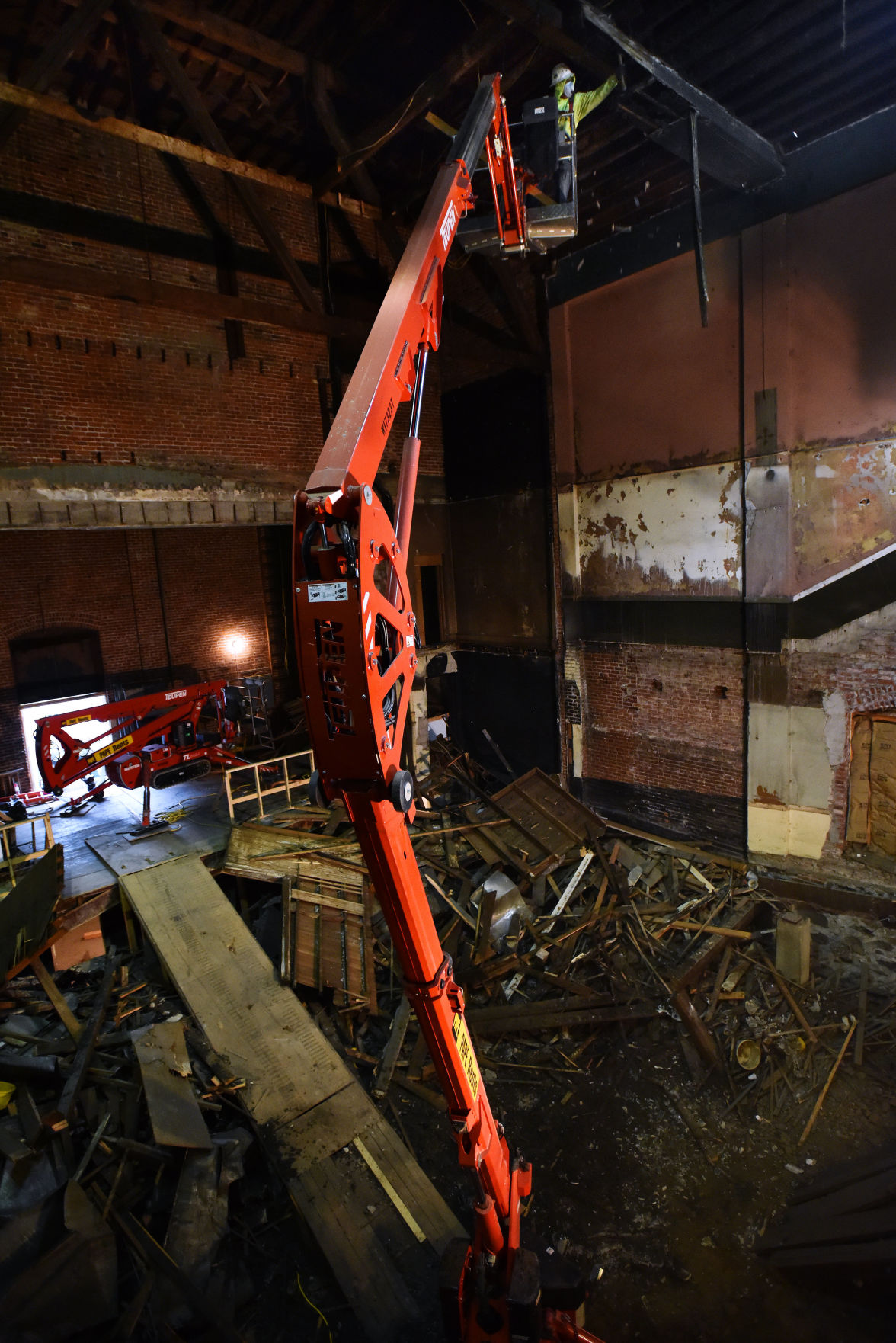 Staff photo by E.J. HarrisJamie Salazar, with Kirby Nagelhout Construction Co., pulls down parts of the wooden ceiling from a man-lift in the Rivoli Theater on Tuesday in Pendleton. 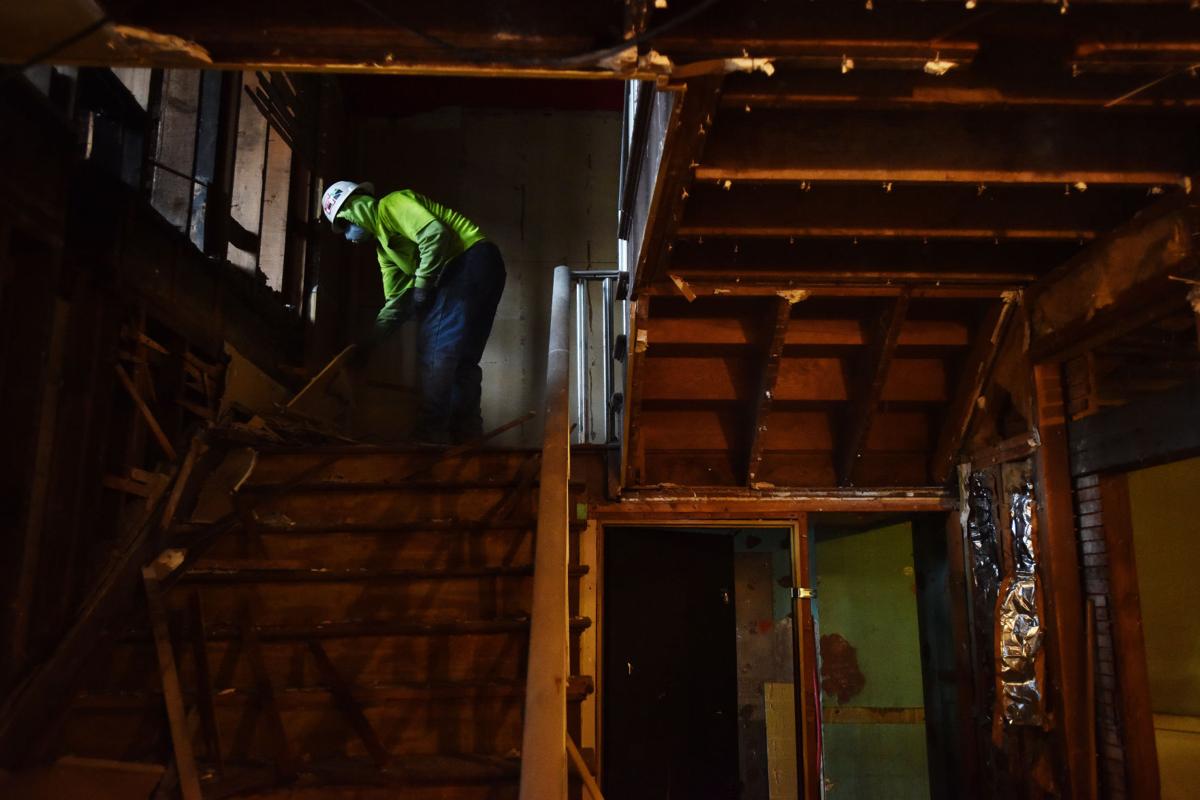 Staff photo by E.J. HarrisLaramie Boston, with Kirby Nagelhout Construction Co., pulls down old siding at the Rivoli Theater on Tuesday in Pendleton. 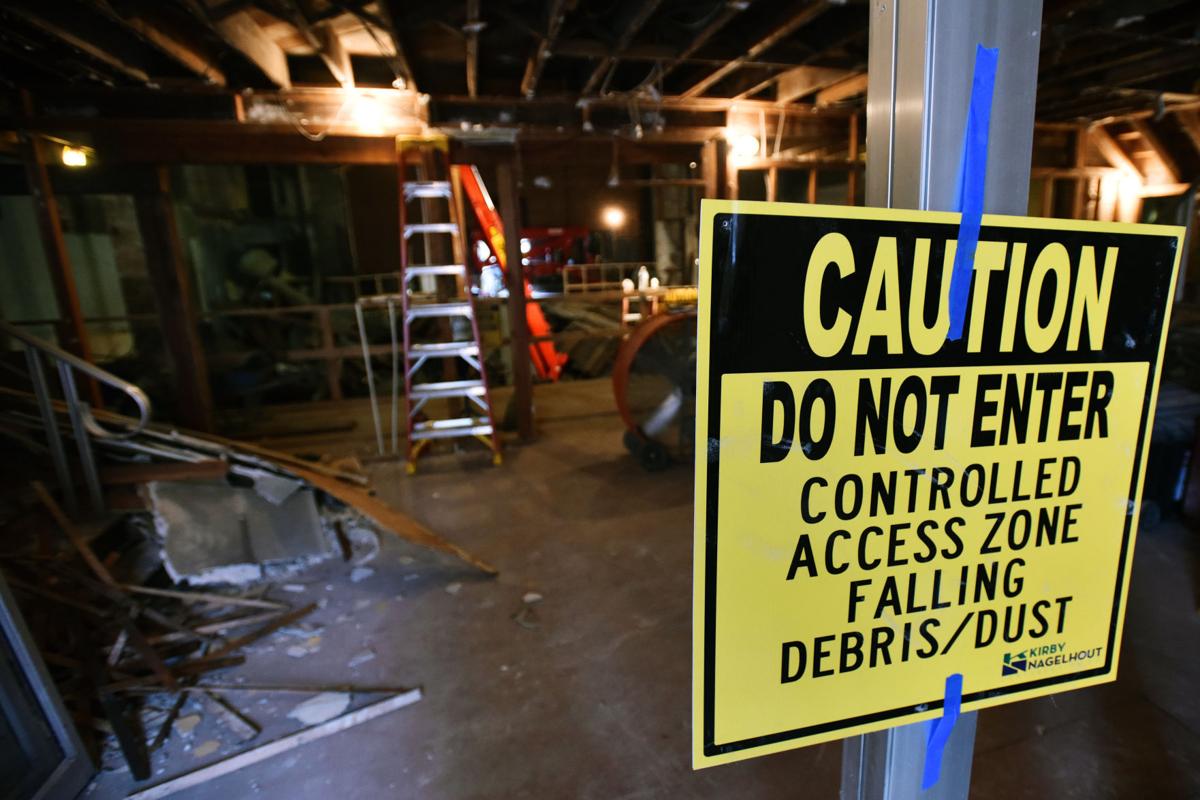 Staff photo by E.J. HarrisThe demolition at the Rivoli Theater is 70 percent done with aims for a completion date of April 15.

Staff photo by E.J. HarrisJamie Salazar, with Kirby Nagelhout Construction Co., pulls down parts of the wooden ceiling from a man-lift in the Rivoli Theater on Tuesday in Pendleton.

Staff photo by E.J. HarrisLaramie Boston, with Kirby Nagelhout Construction Co., pulls down old siding at the Rivoli Theater on Tuesday in Pendleton.

Staff photo by E.J. HarrisThe demolition at the Rivoli Theater is 70 percent done with aims for a completion date of April 15.

Piles of boards, beams and plaster cover either side of the basement of the old Rivoli Theater in downtown Pendleton. Some of that includes what was the ground floor.

The place is all but gutted.

“I’d say nearly 70 percent done now, and we hope to complete demolition by April 15,” Picken said. “That’s getting it all down.”

Volunteers started the demolition last year. The nonprofit coalition also hired Kirby Nagelhout Construction Co. to handle the tough parts. The Bend-based business staffs an office in Pendleton and built the Yellowhawk Tribal Health Center, and in 2015 handled the security upgrades at Pendleton High School and Sunridge Middle School, as well as the installation of larger air conditioning units at Sunridge.

Jon York is the Kirby Nagelhout project superintendent. He said crews have removed walls, stage arches and more. Much of that took place on two mechanical lifts, the largest capable of raising workers more than 50 feet in the air. The bigger machine is battery powered and weighs about 5,200 pounds, York said, about a third of typical lifts, and can roll on tank-like treads through most door frames.

The company often runs a three-person crew inside the Rivoli, with two on lifts and a runner on the ground. York said over the next couple of weeks they will tear down the balcony, take out the two storefronts and remove the rest of the floor.

“Demo is like a chess game,” York said, “in how to look forward so you don’t put yourself into a corner.”

Workers also keep an eye peeled for curious onlookers. Locals want to know what’s happening inside the old building, he said, but they want the public to stay out for safety reasons.

Picken said removing the debris is going to take most of the summer. Basement excavation comes next, he said, then insulation of steel and concrete structures. The demolition, excavation and insulation work make up phase one of Rivoli construction.

“Our goal timeline to complete the first phase is June 1, 2020,” he said, three years after the phase began.

Phase one’s cost estimate is $559,114, Picken said, and the coalition has raised a little more than half of that. Grants from the Oregon Parks and Recreation Department, Umatilla County economic development and the Wildhorse Foundation in aggregate provided $125,000.

The theater project began in 2010 with fundraising to buy the building. Picken said getting to this point has meant taking methodical steps, but finally showing the community some progress feels good.

The coalition has applied for more grants, and Picken said he also feels good about the likelihood of receiving those awards. As the money rolls in, he said, the project continues to roll along.

Tuesday morning one crew member on the lift pried boards from the ceiling. The old pieces crashed into the pile far below, landing with a thud that echoed. York stood next to the wood railing on the edge of the remaining floor and watched the scene from under his white hard hat.

Bringing new life to the Rivoli was exciting for Pendleton, he said, and “would be a fun project to take right through” to the end.