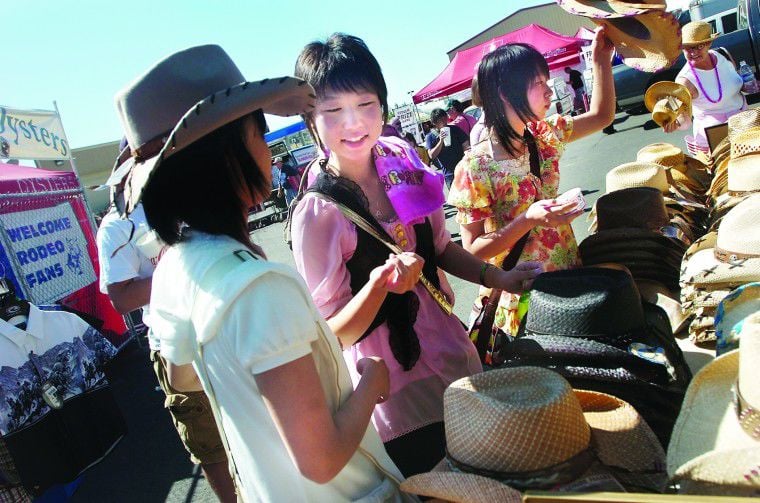 Japanese junior high school students Erina Asada, Misaki Tadano and Rina Sakurai, all from Fukushima, Japan, look at cowboys hats while taking in the sights during the Pendleton Round-Up in 2008. 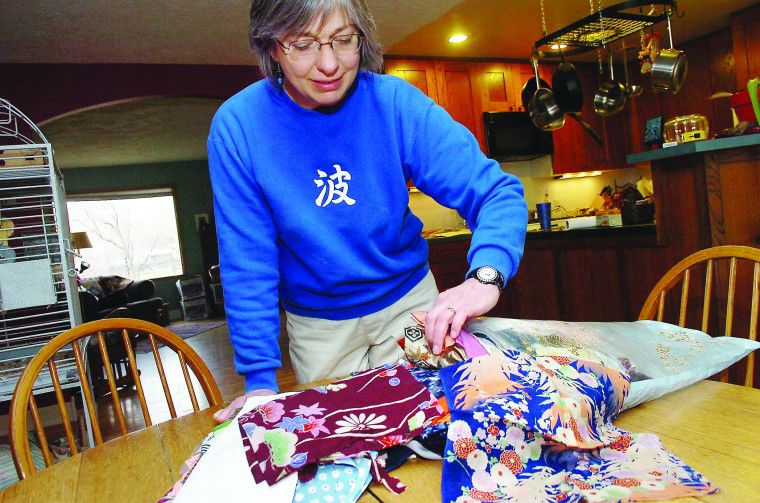 Karin Powers has souvenirs and gifts from the many trips she has made to Japan, and from the numerous Japanese students and guests she and her husband, Joe Engum, have hosted at their home in Pendleton. Here Powers looks through a bag of materials used to make Japanese kimonos that was given to her Seiko Kowata from Minomisoma.

Japanese junior high school students Erina Asada, Misaki Tadano and Rina Sakurai, all from Fukushima, Japan, look at cowboys hats while taking in the sights during the Pendleton Round-Up in 2008.

Karin Powers has souvenirs and gifts from the many trips she has made to Japan, and from the numerous Japanese students and guests she and her husband, Joe Engum, have hosted at their home in Pendleton. Here Powers looks through a bag of materials used to make Japanese kimonos that was given to her Seiko Kowata from Minomisoma.

My first thought was, They didnt deserves that, she said.

Powers has been to Minamisouma and lived with a family there as part of a culture exchange program between the cities. Her host father, she said, took the grandest delight in beginning each morning with a magic trick. Her host family treated her as one of their own.

Basically, the more I think about what has happened in Minamisouma, the more I realize how much these relationships have meant to me over the years, Powers said. Not just our home, but our lives, are scattered with souvenirs from Japan.

Now, more than 500 are officially dead and more than 2,000 souls missing from Minamisouma after an earthquake and tsunami last Friday devastated the city.

 .... all the destruction and suffering  it just breaks my heart, Powers said.

Pendleton and its Japanese sister cities have been exchanging high school students since 2000. Haramachi was Pendletons original sister city. In 2006 Haramachi and two nearby cities merged to form Minamisouma, which has continued the exchanges.

For two to three weeks in July, six students from Pendleton High School and one or two chaperones live with host families in Minamisouma. They experience much of the local life and culture and witness the Soma-Nomaoi festival that culminates in a giant and colorful version of capture the flag  on horseback to boot  in commemoration of a battle from feudal Japan.

In September, Pendleton plays host to Japanese students and their chaperones. They stay with local families and take in the Round-Up.

Powers and her husband Joe Engum have been involved in the cultural exchange since the beginning. In the hours and days that followed, they and many others sought ot find out if their Japanese friends and host families were safe, or even alive.

Yuhi Abe had never visited an English-speaking place until he came to Pendleton in 2005. The native of Minamisouma stayed with Powers and Engum, and Abe was one of the first people they tried to find.

He was nowhere near Minamisouma, but his family was.

Abe is a student at Saitama University, about a dozen miles north of Tokyo. He was with friends when the 9.0-magnitude quake shook his country. The epicenter was deep under the Pacific Ocean and about 80 miles west of Sendai, on the northeast coast of Japans main island.

Only 15 minutes after the quake, the first tsunami hit Sendai. A tsunami isnt a single tidal wave, but a series of large, powerful waves. It engulfed hundreds of miles of coastline and obliterated entire communities. Abes thoughts raced to his mother, father and grandfather in Minamisouma, a large portion of which is on the coast.

I was so worried about them, Abe said.

But phones weren't working. He tried over and again. A few frantic hours later, his mother answered. They were OK, but just. His mother and grandfather climbed a mountain to escape the tsunami.

It destroyed almost everything, Abe said. It was a close call.

His grandfather lost his home, but his mother and fathers home was unharmed and became a temporary refuge for others. Abes family stayed in Minamisouma until the dangers of the nearby Fukushima nuclear power plant forced a large evacuation. Now Abes family, like hundreds of thousands of Japanese, are living in an emergency shelter.

Debbie Banister was the chaperone for the Pendleton students who went to Minamisouma last year, and was going to the chaperone again this year. Her son, Travis, also went in 2010. The night before the disaster, shed been up, taking care of a sick child. She awoke late and saw the news. The family lives near Pilot Rock, where they have a dial-up connection to the Internet. She bundled up her child and headed to her familys home in Pendleton, where Internet connection is much faster.

She searched for what may have happened to her host family.

I was worried, she said. Nobody seemed to know a whole lot of anything that was going on.

People in Pendleton reached out to their friends from Minamisouma. They called and sent emails, but the most useful tool proved to be the social networking website Facebook. City attorney Pete Wells even created a Pendleton-Minamisouma Facebook group.

Information about where people were and if they were safe was slow coming in the first few days after the quake. Now its coming faster, and much of it is good.

Saturday morning, Bannister posted this: Travis heard from his host family, the Kowatas (Masato, Seiko, Kento and Yuka). They are safe and in Tokyo with family.

And Engum responded with news that many wanted to hear: that Mihoko Endo was OK.

Endo has been a frequent chaperone on the exchanges. She has stayed with Powers and Engum three times, including last year. Though Engum said Endoh is safe, no one has said where she is.

Becca Phinney was an exchange student in 2007, and her family also hosted two students that September. Her father, Will Phinney, called her about the earthquake and tsunami. She didnt want to believe Minamisouma was in danger. Then a friend, Adam Charlton, who also had been in Minamisouma, called her and told her the dark reality.

Looking at photos of what was happened became too much, she said. Every frightened face looked for a moment like someone I knew ... It was awful. I had to stop looking.

Phinney worried greatly about her friends in Japan. Then her host sister, Momoko Takada, said she and her family were safe. Then the two girls who stayed with her also said they were OK. And others, too, said they were safe.

And Phinney is holding tight to this thought:

My dad's been telling me that the Japanese are resilient people. They survived two atomic bombs and were able to rebuild and become as strong as they were before this disaster. While it may take more time than anyone is hoping, I have faith that they will rebuild. I know Minamisouma can recover as a city, and I know that my host family and friends can regain the spirit they had before the tsunami hit.