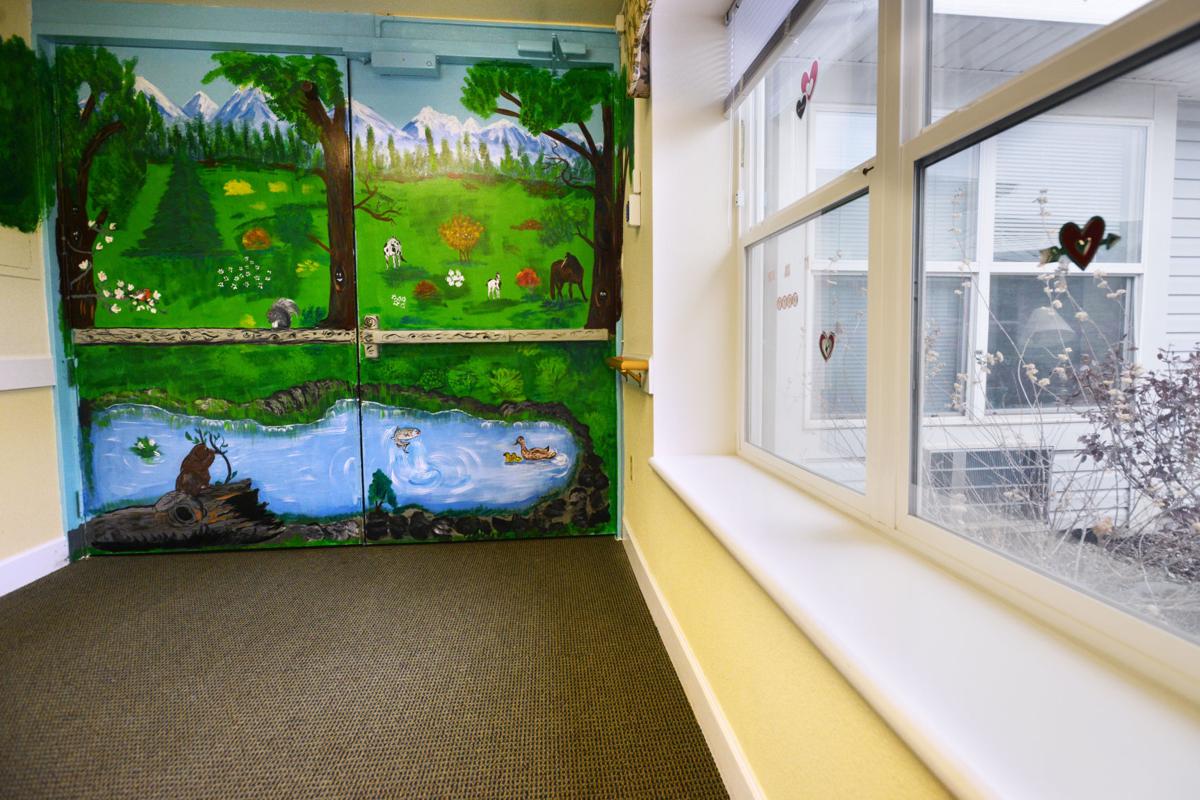 Staff at the Juniper house in Pendleton hired a local artist to paint a mural on the doors leading from their memory care unit into the rest of the facility. 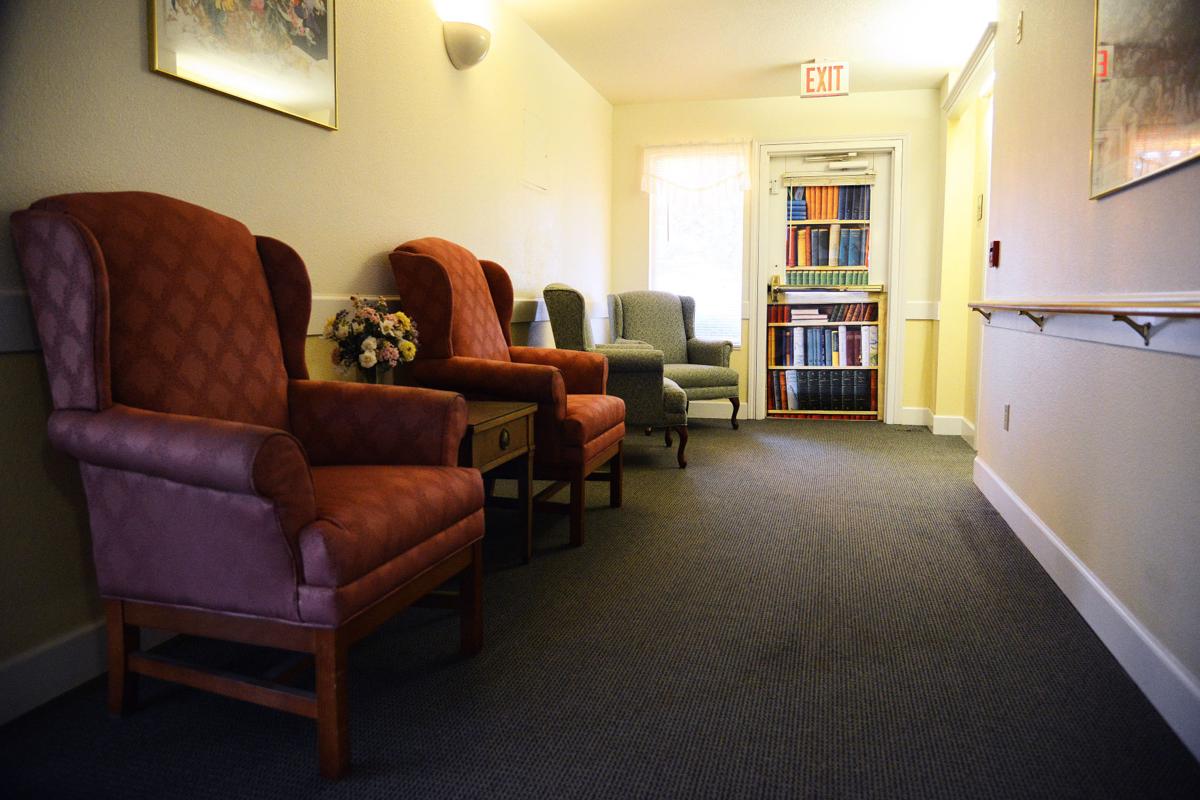 An exterior exit door has been camouflaged with a wrap to make it appear as a bookshelf at the end of one hallway at Juniper House in Pendleton.

Staff at the Juniper house in Pendleton hired a local artist to paint a mural on the doors leading from their memory care unit into the rest of the facility.

An exterior exit door has been camouflaged with a wrap to make it appear as a bookshelf at the end of one hallway at Juniper House in Pendleton.

In the past, as the sun dipped in the sky, came the occasional sound of banging on the locked steel door serving as the main entrance to the Juniper House Memory Care unit.

Some of the unit’s 16 residents exhibited the symptoms of Sundown Syndrome, where individuals with Alzheimer’s disease get agitated, disoriented and restless late in the day. They attempted to get through the door and couldn’t. Hence, the banging.

It was heartbreaking to see.

“A door is a big target for someone with memory impairment,” said Alanna Thompson, health services coordinator at Juniper House. “Sundowning is a phenomenon with Alzheimer’s and dementia. From mid-afternoon to early evening, some of the residents get anxious or aggressive and start to wander. A lot of times, residents tried to get out that door.”

It’s called “exit seeking” behavior, a strong desire to leave the building and wander. Assistant Director Jessica Raphael read about other facilities that disguised doors as bookcases or turned them into murals. She hired Pendleton artist Laurie Doherty to paint a scene on the double doors.

Doherty designed a bucolic scene that included mountains, trees, a meadow, a pond and a variety of animals – fish, beaver, ducks, a squirrel and a fat robin.

“When I painted the details, some of the residents watched me work,” she said.

Since completion around Christmastime, the banging has all but stopped, said Thompson and Raphael.

In the other part of the facility – home for 25 assisted living residents – another door was camouflaged as a set of bookshelves to deter occasional exit seeking activity in at least one occupant.

Sundowning is only one of many challenges for Alzheimer’s patients and their caregivers. People with the disease have trouble with depth perception and distinguishing other visual information. A white table against a white wall may blend together. Tiles may appear as scattered objects.

“A black rug on a light-colored floor – they commonly see that as a hole,” Thompson said. “They’ll walk around it.”

Thompson said staff who serve Alzheimer’s patients must be cognizant of those challenges. At Juniper, she said, even the color of dishware was chosen with care.

“In our unit, we have red plates, red bowls and red cups,” Thompson said. “When you have a white plate with potatoes and chicken, it all blends together. Rather than looking at a monochromatic surface, red plates provide contrast.”

With Alzheimer’s patients, Raphael said, the idea is to figure out what makes each person feel comfortable and normal.

“We help them live the life they are familiar with,” she said. “That may be the newspaper and coffee in the morning and tea in the afternoon, whatever it takes to feel normal.”

An Alzheimer’s living center in Ohio, the Lantern, has taken that notion to the extreme. Each resident’s room has a front porch and window with shutters to mimic the style of the ’30s and ’40s when most of the residents were children. Grass-like carpet covers the hallways. The fiber optic ceiling appears as sky, which dims and brightens depending on time of day. Birds chirp through speakers and appetizing aromas are pumped into the unit to get residents in the mood for meals.

At Dementia Village, in the Netherlands, residents live in stylized homes from bygone eras. Instead of hallways, the facility is a village with town square, garden, theater and stores where no money changes hands. Caregivers dress in street clothes.

Care at the Juniper House comes with less staging, but plenty of compassion, Raphael said.

“Providing an environment that is calming and feels homey – that’s the goal.”