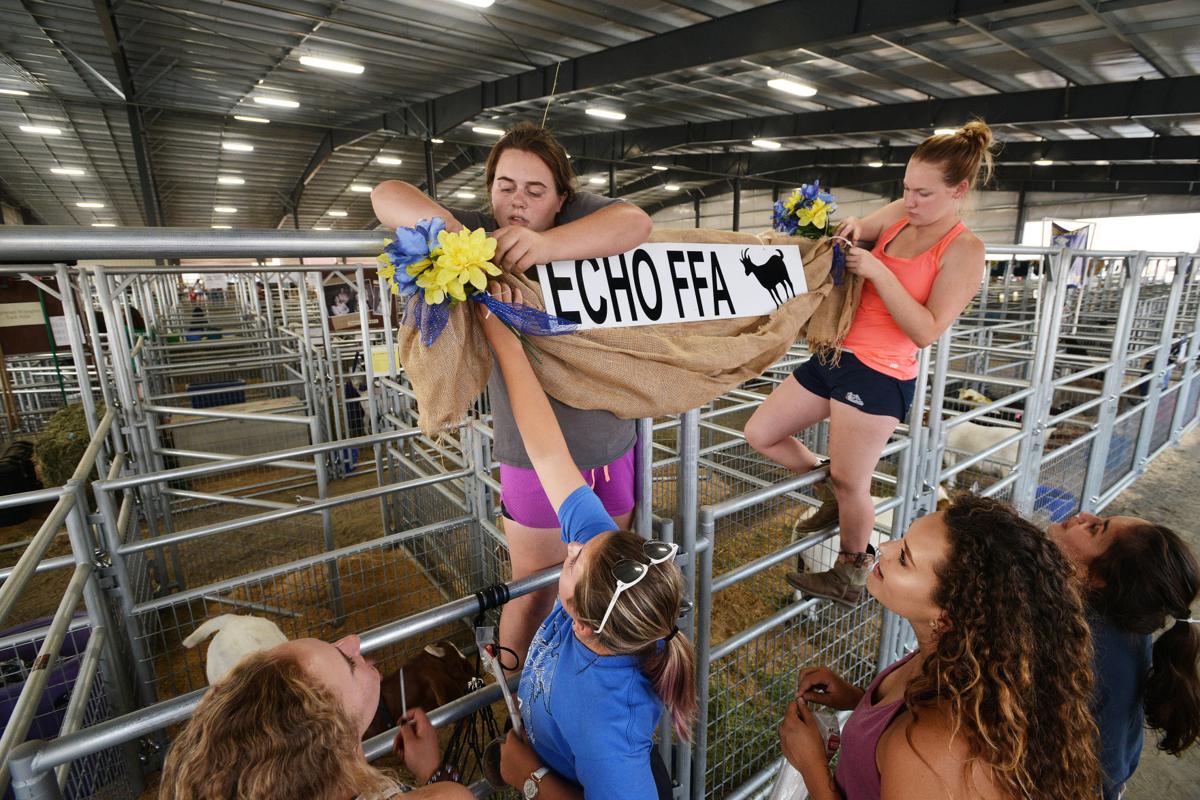 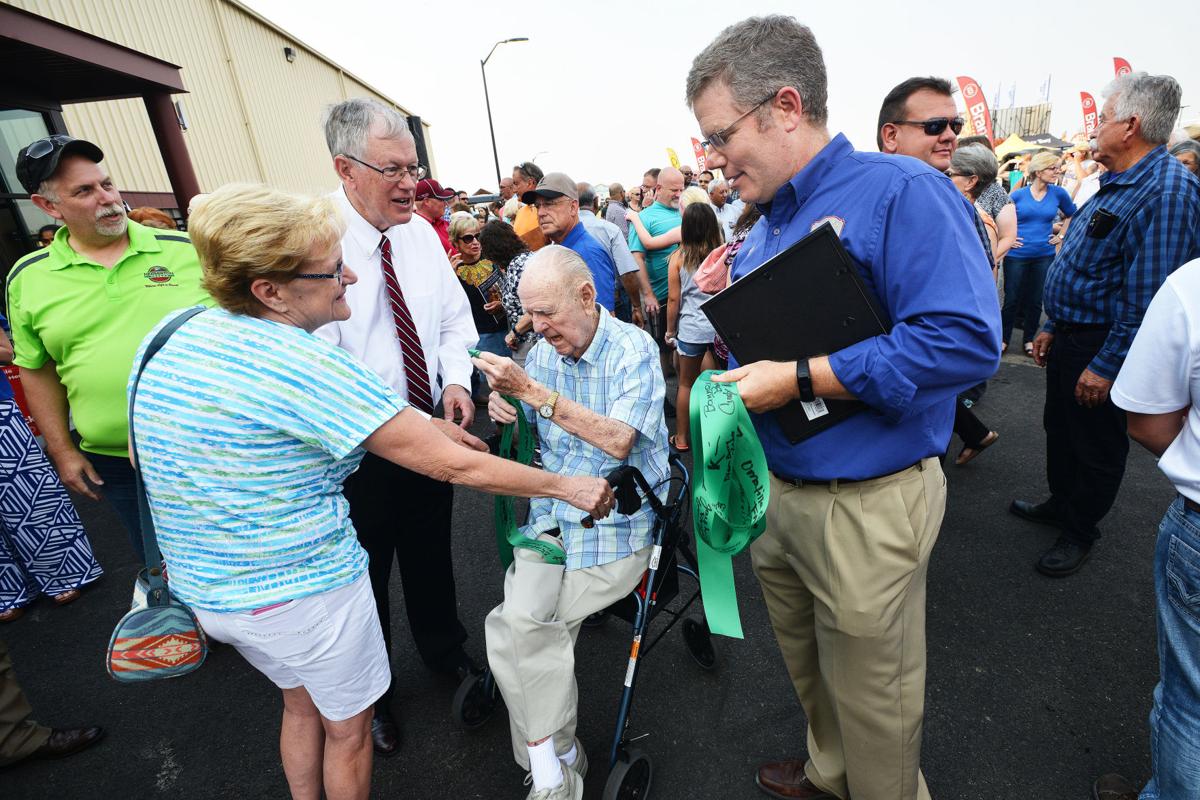 Former Hermiston city manager Tom Harper, center, looks at the signatures on a ribbon used in a ribbon cutting ceremony for the Eastern Oregon Trade and Event Center as current city manager Byron Smith, at right, looks on Monday in Hermiston. Harper was the city manager when the City of Hermiston originally bought the EOTEC property. 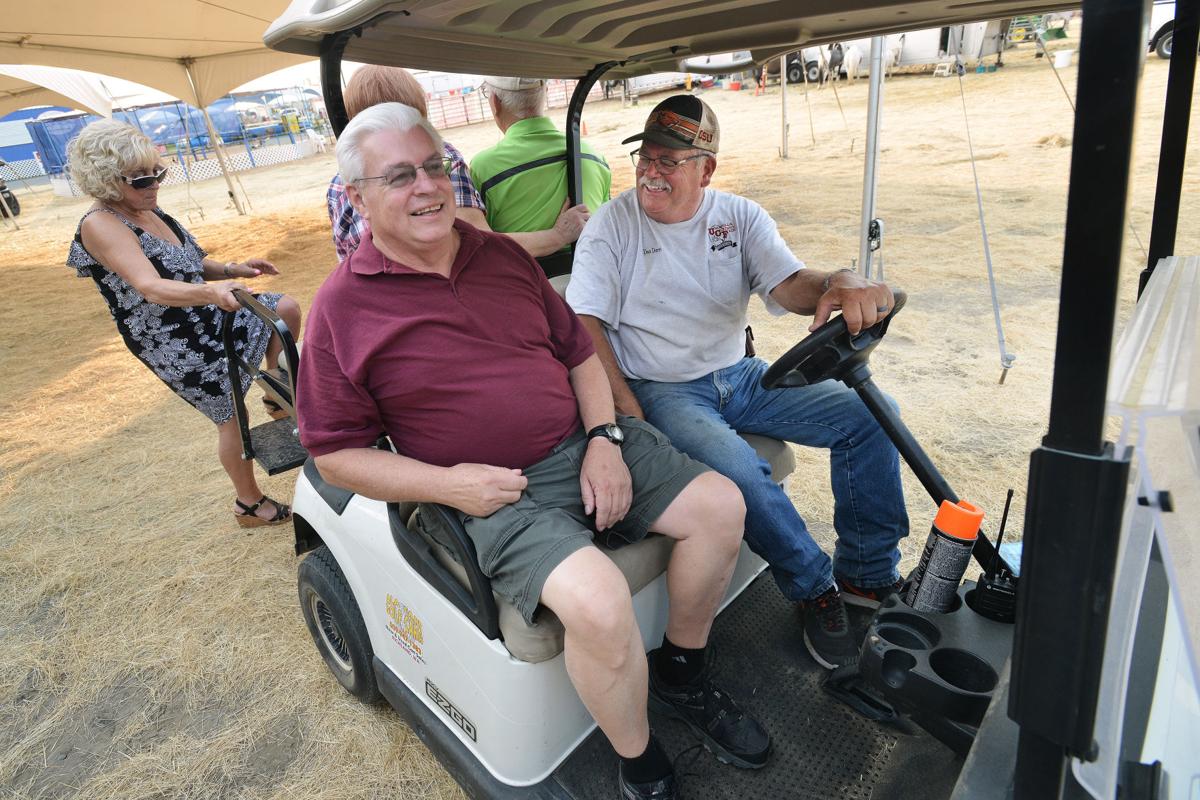 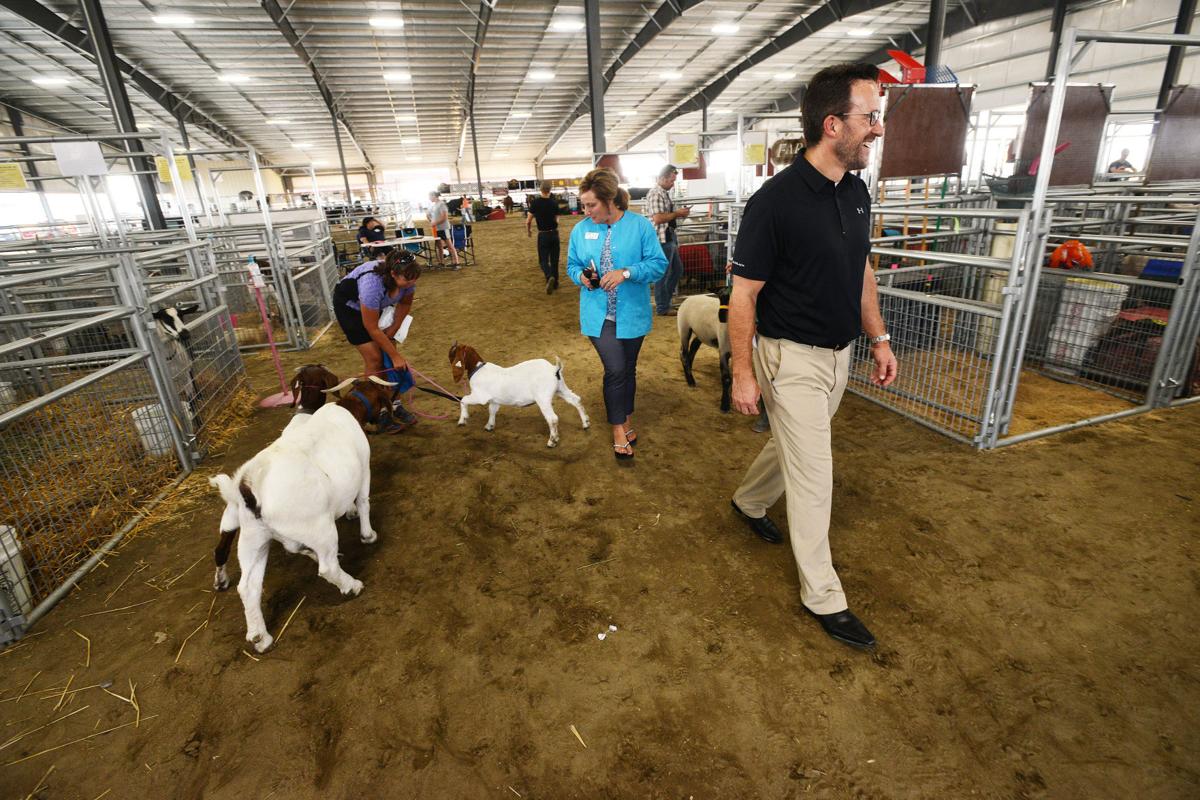 Hermiston Mayor Dave Drotzmann walks around one of the livestock barns at the Umatilla County Fair on Monday in Hermiston.

Former Hermiston city manager Tom Harper, center, looks at the signatures on a ribbon used in a ribbon cutting ceremony for the Eastern Oregon Trade and Event Center as current city manager Byron Smith, at right, looks on Monday in Hermiston. Harper was the city manager when the City of Hermiston originally bought the EOTEC property.

Hermiston Mayor Dave Drotzmann walks around one of the livestock barns at the Umatilla County Fair on Monday in Hermiston.

About 100 people crowded into the foyer at the Eastern Oregon Trade and Events Center main building Monday evening, hours from the start of the facility’s biggest event to date.

On the eve of the 105th Umatilla County Fair, backers of EOTEC and community members cut the ribbon on the facility and cheered the efforts it’s taken to get to this point.

It was a culmination of many years of planning and work, and many let out a sigh of relief that the roughly $16 million project was finally coming to fruition.

“If you’re like me, you were nervous up until today,” said Hermiston Mayor David Drotzmann. “There was a lot of anxiety and nervousness that things wouldn’t get done. But I’m excited and proud to be here.”

Drotzmann, along with City Manager Byron Smith and Umatilla County Commissioner Larry Givens, both members of the EOTEC board, talked about the work it’s taken to get the facility up and running.

“In 2012, we had just signed away the Umatilla County Fairgrounds,” Givens said. “I was more than scared. I thought, was this an absolute disaster? But people have pitched in. I went down to the old fairgrounds last Saturday, and thought, how did we manage to survive in that spot?”

Smith said it was exciting to see the place finally fill up with vendors.

“There have been lots of bumps,” Smith said. “But nothing we couldn’t overcome.”

Drotzmann acknowledged the many people, and groups, that have contributed money or time to EOTEC’s progress. Along with the many people who have been working on the project in the past few years, he acknowledged those who had the vision for it in the first place. One of those people, Hermiston’s first city manager Tom Harper, was present at the gathering.

Givens noted that the work was not finished.

“This is just the beginning,” he said. “We’ll be here, and we’ll continue to grow.”

After the ribbon cutting, community members stuck around to tour the new facility, both indoors and out. People were busy setting up vendor booths, rides and the rodeo arena, and students were milling about the animal barns, preparing to show their livestock. Inside, displays of food, produce and handwork were already set up.

Visitors were eager to explore the new facility.

Steve Williams, a Umatilla County resident since 1984, said he comes to the fair and rodeo every year.

“It’s a great addition,” he said, adding that he’s looking forward to the rodeo most — especially the bull riding.

Fair participants seemed pleased with the new digs, too. Taylor Betz, a 19-year-old showing open-class breeding stock, said she’s been showing at the fair for 13 years.

“It looks a lot more like the bigger shows I’ve been to,” said the Hermiston High School graduate, who’s studying agricultural business and animal science at Oregon State University. Betz will show a junior heifer on Wednesday in the cross-breeding portion of the fair. She has always shown beef, but started out with steers and slowly added breeding stock to her repertoire.

A group of students from Echo School’s Future Farmers of America chapter said they were looking forward to some of the amenities.

“I’m really excited about the shower situation,” said Laci Wiggins, who recently graduated from Echo School and is showing two breeding goats and a market hog. “And the pens are a lot nicer.”

Her teacher, Brooke VanderVeen, said the biggest difference between this facility and the previous one was the layout.

“The old one was outdated,” she said. “And here, the beef, goats and sheep are all under one roof.”

The fair begins Tuesday at 9 a.m. Tickets are $10 for general admission, and parking is $5. The money from parking will go toward covering fair costs, Smith said.