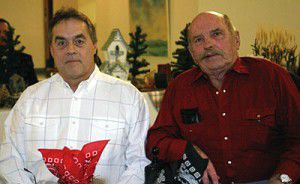 Hermiston's Distinguished Man of the Year, Glenn Chowning, probably squirmed in his seat a little when Shirley Parsons took the microphone and started talking about the man's prodigious generosity. His giving is done so discreetly, she said, that few people know about it.

Chowning, a Los Angeles transplant and owner of Terra Poma Farms, is generous with his time and his money, Parsons said. He mentors young people, serves on boards, shares financial and budgeting knowledge and is generous with money.

"On a number of occasions, he has given someone a vehicle because theirs is not running," she said.

He paid off the balance of a friend's home so he wouldn't lose it, gave potatoes to Pilot Rock families when the mill closed and purchased a $4,000 voice computer for a disabled boy. The list goes on.

"He is generous in every area of his life," Parsons said.

She also helps her church quilting group make quilts for babies at the hospital.

"She is passionate about many issues - mostly those affecting children of the world," said Margaret Saylor, who nominated Fialka and presented the award. "Her enthusiasm is infectious and indefatigable."

BUSINESS PERSON OF THE YEAR

Generosity to youth landed Elmer Georgeson and Lou Lyons the Business Person of the Year award.

"The adage, it takes a community to raise a child, is as true as it ever was," said Tom Spoo, who presented the award to the owners of Elmer's Irrigation.

"If a young person needs help, Elmer and Lou are there," said Spike Piersol, who nominated the two owners of Elmer's Irrigation.

Betty Noack, winner of the Chamber Community Service Award, is proof "dynamite comes in small packages," according to Master of Ceremonies Steve Williams.

"Betty was the driving force behind the beautiful fountain in front of Good Shepherd Hospital," said Hermiston Mayor Bob Severson, one of two people who nominated Noack.

The fountain was dedicated on what would have been Noack and her husband Bob's 52nd wedding anniversary. Bob, a gregarious salesman who Betty said "could talk an Eskimo into buying snow," died of cancer at Good Shepherd 17 years ago.

"She lost her husband to a devastating illness," said Mark Ettesvold, who presented the award to Noack. "She wanted to leave a lasting memorial to her husband and wanted to do it in a way that would benefit the community."

The fountain is a peaceful place of reflection to honor both Bob and hospice volunteers who served as a rock for Noack and her husband, said Ettesvold.

Noack earned funds for the project by creating the Hermiston Variety Show, which she oversaw for 10 years. She twisted the arms of the hospital and other organizations for the rest of the money.

The Mayor's Award went to a pioneer of the Hermiston School District, Jack Jenkins. Jenkins was Hermiston High School principal for 18 years, before becoming assistant superintendent. He retired in 1982, but didn't settle into a rocking chair on the porch.

"I arrived here in 1960 and I have no plans to leave," Jenkins quipped after receiving his award.

Matthew Dunlap, a senior at Stanfield Secondary School, won the Altrusa Outstanding Young Citizen Award. Dunlap manages to stay on his school's honor roll - while playing football, basketball and tennis - and he also serves as senior class treasurer and FFA district representative. The teen competes in national and international taekwondo competitions and is 19th in the world in poomsae for his age group.

Hermiston School Superintendent Fred Maiocco smilingly claimed the podium for longer than any other presenter Tuesday as he announced Hermiston's educators and administrator of the year. In past years the district has chosen one educator and one administrator to honor. However, this year, nine educators were selected - one from each elementary school and middle school and two from the high school - along with one administrator.

Mark Mulvihill won 2007 Administrator of the Year. Maiocco praised Mulvihill, describing him as a "high-energy, articulate leader" who is "known for making decisions with the best interests of students in mind."