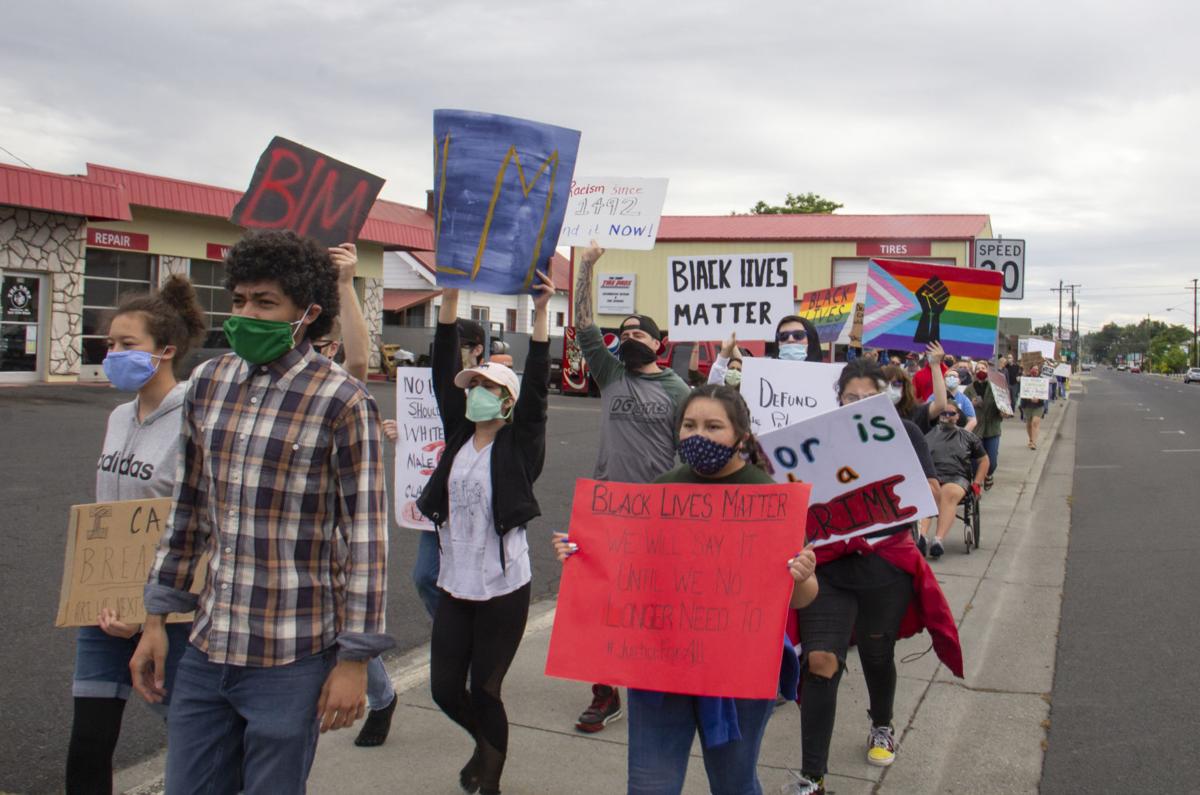 Protesters march in support of the Black Lives Matter movement on Saturday, June 20, 2020, through Pendleton. 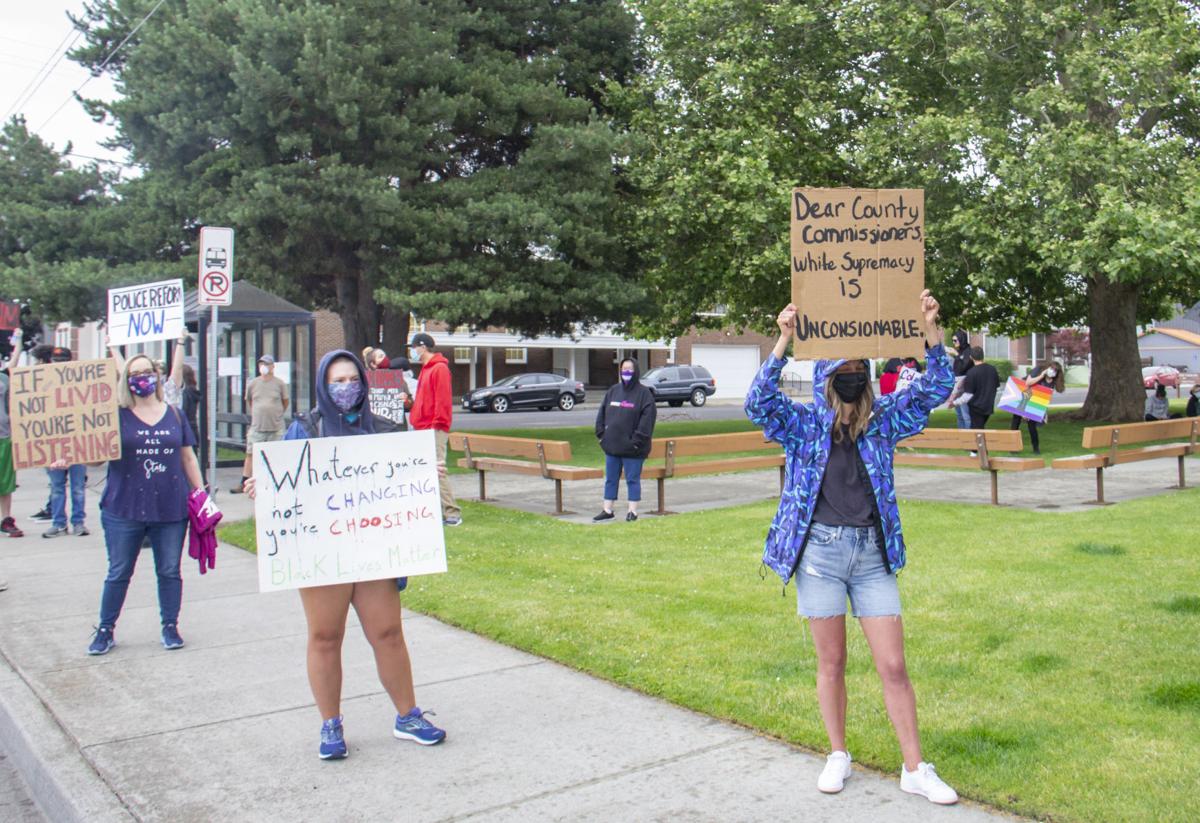 Cristin Childress, right, a 32-year-old Pendleton resident, carries a sign in protest of the Umatilla County commissioners’ letter in support of law enforcement during a Black Lives Matter protest on Saturday, June 20, 2020. 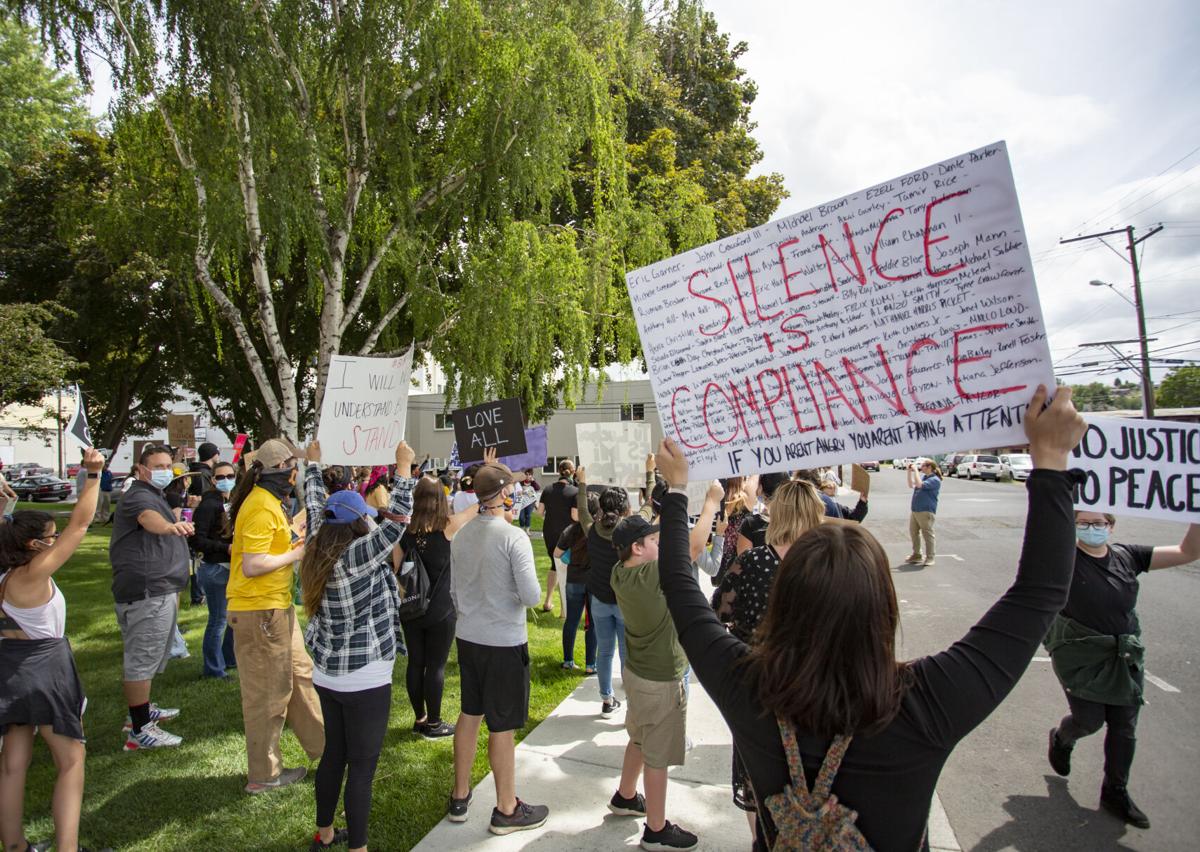 Protesters march against racism and police violence in Pendleton on Saturday, June 6, 2020. 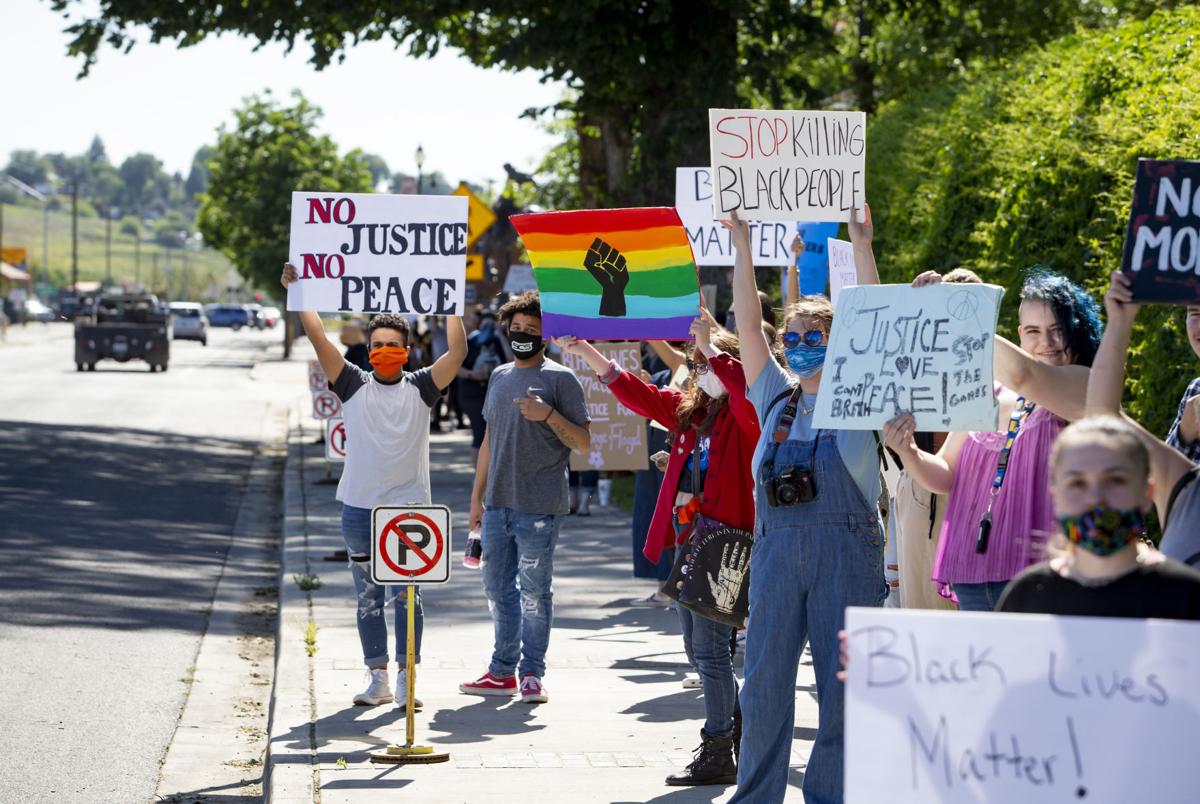 Protestors gather on the sidewalk at Roy Raley Park to protest against racism and police violence on Monday, June 1, 2020. The protest quickly drew around 150 participants waving signs and chanting in the first of several weeks of Black Lives Matter protests in Pendleton.

Protesters march in support of the Black Lives Matter movement on Saturday, June 20, 2020, through Pendleton.

Cristin Childress, right, a 32-year-old Pendleton resident, carries a sign in protest of the Umatilla County commissioners’ letter in support of law enforcement during a Black Lives Matter protest on Saturday, June 20, 2020.

Protesters march against racism and police violence in Pendleton on Saturday, June 6, 2020.

Protestors gather on the sidewalk at Roy Raley Park to protest against racism and police violence on Monday, June 1, 2020. The protest quickly drew around 150 participants waving signs and chanting in the first of several weeks of Black Lives Matter protests in Pendleton.

UMATILLA COUNTY — An order adopted by the Umatilla County Board of Commissioners in June that issued support for local law enforcement and called the national Black Lives Matter protest movement “disrespectful” has been met by sharp criticism from some in the Umatilla County community.

Protests have continued around the country for more than 30 consecutive days in wake of the murder of George Floyd on May 25, while local demonstrations have continued each weekend, where community members have voiced their disagreement with the order and its language.

“The Umatilla County Board of Commissioners strongly objects to the horrific act that took place in the City of Minneapolis ... at the same time, we are also troubled by a movement across the country to disregard and disrespect the 800,000 sworn officers who have taken an oath to protect the citizenry and preserve the peace,” the order stated.

Local protest organizers, who said they’d seen no attempt by commissioners to attend the protests or speak with those involved with them directly, called the order “hurtful” as others said it added to their motivation to be a part of the movement.

“Generally, it’s been about solidarity with the Black Lives Matter movement,” 32-year-old Pendleton resident Cristin Childress said at a protest in Pendleton on June 20. “But today it’s speaking directly to our county commissioners.”

In a letter to the editor published in the Hermiston Herald, Jackie Linton, a Black Hermiston resident who previously ran for city council and has been a vocal leader at local protests, called explicitly for Commissioner John Shafer and Commissioner George Murdock to be voted out of office.

The commissioners have emphasized that they respect and are proud of protests occurring locally for staying peaceful, but organizers said they felt disrespected by the commissioners’ decision to make an official statement about the protest movement as a whole without any discussion with those involved in it locally.

“I wish they would reach out and talk to us about it,” said Kenna Rhodes, who has helped organize recurring protests each Saturday in Pendleton. “We’re not here to be disrespectful to anybody. We’re here to make the world a better place. I just wish before they would say things that are honestly hurtful to all these people that they would just talk to us and know what we’re here for.”

In an official campaign statement, Nolan Bylenga, the Democratic candidate for House District 58 who has attended recent protests in Pendleton, said he was “troubled” by the commissioners’ focus on the protests as “disrespecting” police.

“There’s something fundamentally American about seeing a wrong, trying to right it and getting criticized for it,” Bylenga said in the statement. “So be it. That’s the cost of progress.”

In the two weeks since making their statement, the commissioners have seen the community’s criticism, though Shafer said they’ve also heard from those who support it.

“I’ve heard a lot of people who are in support of the resolution, but they’re afraid to come out publicly for fear of what’s happening with us in the press and some of the letters to the editor,” Shafer said.

HollyJo Beers, a candidate for county commissioner who spent time in the county as a reserve police officer, said she is one of those who supported the statement.

“I support all law enforcement in Umatilla County,” she said. “There are changes that need to be made, there are always bad apples in the group, but other than that, I think they do a good job.”

Beers said she also felt the protests were disrespectful, while claiming those participating in them have been unwittingly “brainwashed” as a part of a global conspiracy theory known as “Agenda 21” that has circulated the internet for over a decade but has regained popularity amid the COVID-19 pandemic.

“It’s all a part of the same program: Get Trump out, institute our global sustainability, become a socialist state,” Beers said. “And they have all these puppets that they’re using in these different ways and different factions to create havoc and undo the fabric of American society.”

Dan Dorran, who is running against Beers, could not be reached for comment prior to publication.

Shafer and Commissioner Bill Elfering said the majority of direct criticism has been in the form of emails laced with profanity and ad hominems, which Elfering characterized as “emotional” and “knee-jerk” responses.

“When they immediately start calling you names in the emails that doesn’t tend to make you want to open up a dialogue with them,” Shafer said.

But keeping the door open for dialogue has been a message that Bylenga has stressed at local protests in wake of the county’s statement. Shafer said he and Bylenga recently sat down for over an hour to discuss it and the protests in general.

Elfering said he’s had a few discussions with community members that have been constructive and some have pointed out their issue with including broad support for all police officers in the country, which, as Linton pointed out, includes the “bad cops too.”

“Some felt that it was a slight on their emotions over the George Floyd situation,” Elfering said. “And it could probably be interpreted that way.”

But Elfering also drew criticism for a statement he made about systemic racism and there “not being much of it here,” a perspective he said hasn’t changed.

“I still haven’t had anybody really explain, how is systematic racism different from racism?” he said. “How is that different? Nobody’s really explained that part, and they haven’t explained how it exists here.”

At a protest in Pendleton on June 20, Briana Spencer, a member of the Confederated Tribes of the Umatilla Indian Reservation who is also Black, Puerto Rican and French, stepped forward from the crowd at Pendleton City Hall to explain exactly how it exists in Umatilla County and how she and other tribal members have experienced it throughout their lives.

During her speech, Spencer detailed being the target of racial slurs and being ostracized along with other tribal members while attending local schools, and the consistent hurdles she sees put in the way of young tribal members seeking higher education to this day.

“It’s not just police brutality, it’s indoctrinated into all of our systems,” she said.

The county’s statement and subsequent response may have spurred more discussions between the public and board of commissioners about policing and systematic racism. But Spencer highlighted the willful ignorance it took to doubt its existence locally when the county borders the CTUIR and those discussions just as easily could have been had before issuing an official statement.

“They acknowledge that we’re the biggest employer in Eastern Oregon but they didn’t talk to us — they didn’t talk to any of us about this,” she said. “It shouldn’t have taken this outrage for them to realize, ‘Oh, maybe I should widen my horizon,’ when they have tribal members here.”

Oh !! the snowflakes are offended. Time to go back to mom's basement !!