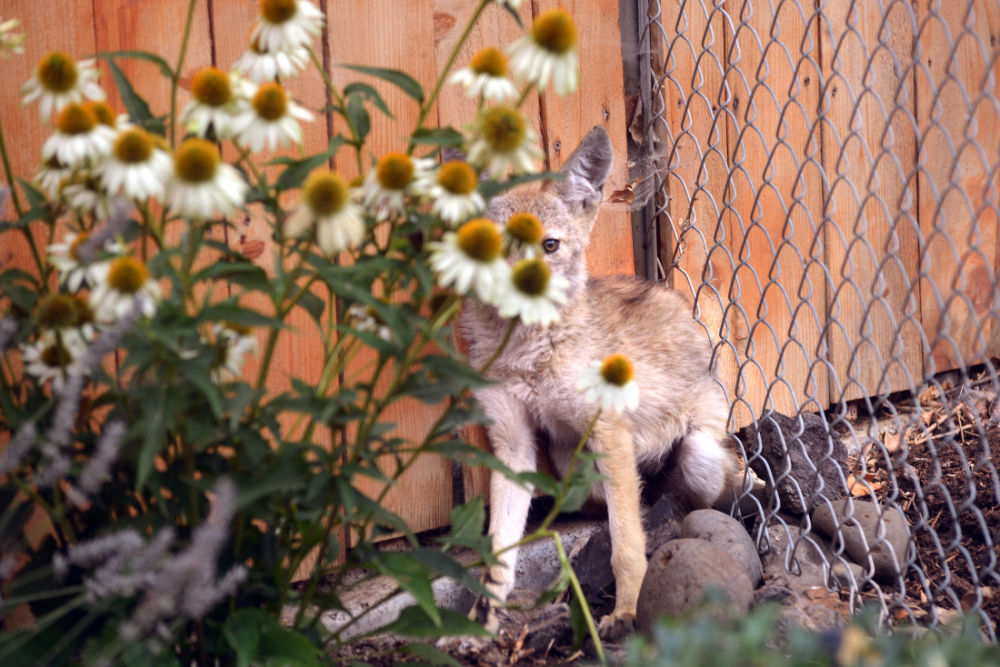 <p>A juvenile coyote sits in the backyard of Tom and Wanda Penner at 1315 NW Despain Avenue on Monday in Pendleton. Tom Penner discovered the little canine in his backyard and called the police.</p> 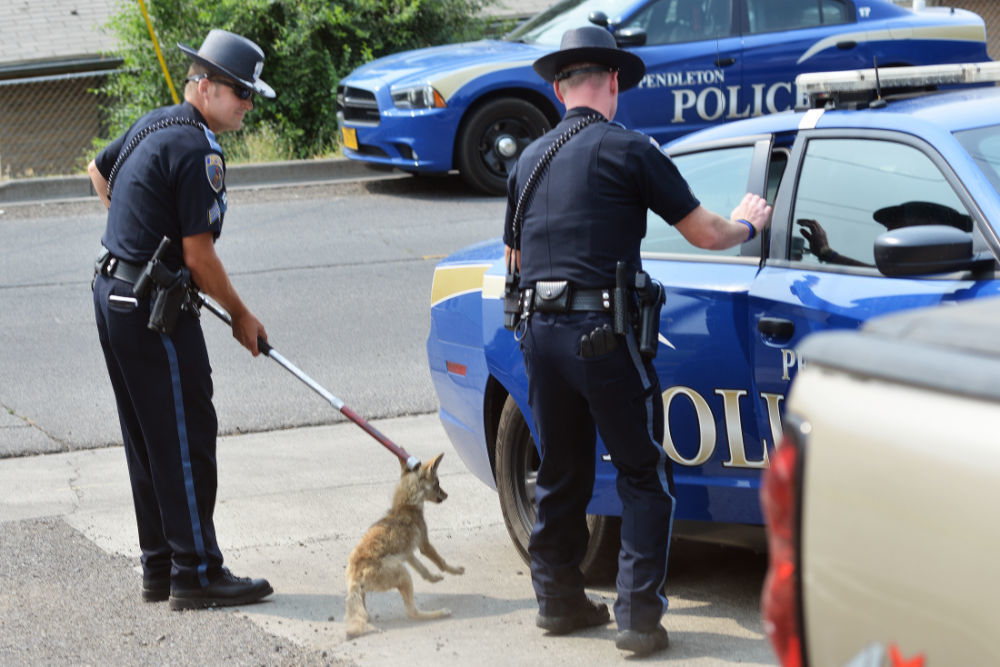 <p>Pendleton Police Sgt. Roger Youncs uses a grab pole to get a juvenile coyote into the back of a patrol car as Cpl. Tyler Reddington holds the door for him on Monday in Pendleton.</p>

<p>A juvenile coyote sits in the backyard of Tom and Wanda Penner at 1315 NW Despain Avenue on Monday in Pendleton. Tom Penner discovered the little canine in his backyard and called the police.</p>

<p>Pendleton Police Sgt. Roger Youncs uses a grab pole to get a juvenile coyote into the back of a patrol car as Cpl. Tyler Reddington holds the door for him on Monday in Pendleton.</p>

Tom Penner got a shock Monday morning when he went to take out the trash.

As he stepped into his back yard, he noticed something blur past. To his astonishment, he realized the blur was a young coyote, which ran to the corner of the small yard and cowered. Not wanting to take his eyes off the pup, Tom called his wife, Wanda, on his cell phone. She came outside to take a look. There was no doubt this was a coyote.

We both were raised on farms, Wanda said. We knew what it was.

Not sure how to eject the animal from their yard, Tom called 9-1-1. Two Pendleton police officers soon arrived at 1315 NW Despain and got busy discussing strategy. Since no one from Oregon Fish & Wildlife was available, Sgt. Roger Youncs approached the coyote using a catch pole with a retractable noose on one end. He looped the little animal around the neck and walked him on hind legs to the patrol car, ever-so-cautiously easing him into the back seat.

From call to capture, the encounter had taken 15 minutes.

While many of us might think this little guy was far afield, wildlife biologist Carl Scheeler describes coyotes as a highly adaptable and opportunistic species that eats everything from fruit to snakes and live in a variety of habitats.

At the end of the earth, there will be coyotes and cockroaches, said Scheeler. They are real survivors.

The coyotes ability to adapt means they not only roam field and forest, but also urban settings.

They go where the food is, Scheeler said. Urban coyotes are very common.

Though their diet is diverse, coyotes prefer small mammals. In neighborhoods, that can mean house cats and small dogs, Scheeler said.

A research study of coyotes living in metropolitan Chicago found the creatures in city parks, commercial buildings and even a pack of 12 roaming the campus of Ohio State University. After tagging and following the movements of about 200 coyotes, researchers estimate there could be a couple thousand of them in Chicagos metro area. The six-study, funded by Cook County Animal Control, also found that urban coyotes survive longer than their rural cousins and pose little danger to humans.

Despite evidence that coyotes are comfortable in urban settings, Younc said this is the first time he has responded to a call involving a coyote. The pup who wandered into the Penners backyard was released outside city limits.