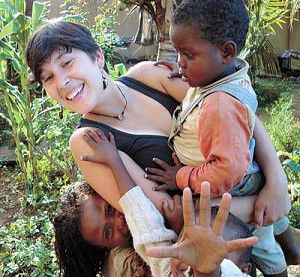 Greggory Dallas plays with three Malagasy children who lived near her house in Madagascar. 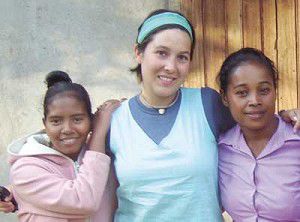 Dallas stands with her friend Hoby (right) and Hoby's sister-in-law. Greggory and Hoby often met to harvest bananas and mangoes from a nearby grove.

Greggory Dallas plays with three Malagasy children who lived near her house in Madagascar.

Dallas stands with her friend Hoby (right) and Hoby's sister-in-law. Greggory and Hoby often met to harvest bananas and mangoes from a nearby grove.

When Greggory Dallas flew into the Indian Ocean island of Madagascar two years ago, it was not unlike Alice entering Wonderland.

"The culture is totally different from ours," said Dallas, a Peace Corps volunteer, from Pendleton.

The nation, a pirate stronghold of old, is now home to 16 million islanders who have few of the modern conveniences enjoyed by the typical American - electricity, plumbing or even toilet paper.

"A child who wakes up doesn't get a bowl of cereal or take a shower," she said. "He goes to a well for a bucket of water."

Dallas marveled at the biodiversity of Madagascar, home to more than 250,000 species, most found nowhere else on the planet. The country is famous for its monkey-like lemurs, which arrived on the island about 2,000 years ago.

"Madagascar is one of the few remaining places where primary rain forests still exist," she said. "Orchid lovers are enthralled with Madagascar - it's a hotbed of orchids."

The country also is politically unstable. A month after Dallas arrived home in Pendleton in December, violence erupted, resulting in more than 100 deaths, the president's resignation and a decision by the Peace Corps to remove its volunteers from the island.

The violence saddened and surprised Dallas.

"It's not something I expected to happen," she said. "I'm not sure what it means for Madagascar."

The political landscape was calmer two years ago when Dallas arrived at a Peace Corps training center and set about learning Malagasy, the native language.

After 21/2 months of training, she traveled to the lakeside village of Tanambe, where she educated villagers about disease prevention and family planning. She also helped young Malagasy girls dare to dream big during an empowerment camp, funded in large part, from money raised in Pendleton.

Dallas and her Peace Corps colleagues gathered up middle school girls from around the lake and took them on field trips to other parts of the country. It's not unusual, Dallas said, for a women to stay in her birth town her entire life.

"The girls had never been to the forest or the national park," Dallas said. "They'd never seen lemurs."

The 20 girls had a chance to wrap their minds around the idea of leaving their village for education and a career. Dallas and other volunteers introduced them to Malagasy women, successful in their careers as business women, university professors and artists.

Dallas said she hung out with a group of teenage girls on election night for the United States. They gathered around a short-wave radio and listened.

"I showed the girls a picture of Obama," she said. "They said, 'Is he Malagasy?' - they thought Americans were all Caucasian."

Shining a spotlight on sexually-transmitted diseases was another part of Dallas' job.

"Many people are quite promiscuous and condoms are not very popular," she said. "The prevalence of STDs is very high."

The volunteers resorted to "wacky" methods to attract attention, such as dressing like human condoms and carrying wooden versions of the male anatomy to demonstrate how to apply condoms.

In another project aimed at helping women, Dallas and other volunteers organized weavers into an income-generating project.

"We helped them market their products in the capital," Dallas said.

Dallas, a 2002 Pendleton High School graduate, is taking a breather and staying with her parents Dave and Shari Dallas at their wheat ranch.

She said her stint in the Peace Corps has cemented a desire to obtain a masters in either public health or nursing.

"The experience made want to do more things for others," she said. "It instilled a sense of community service."