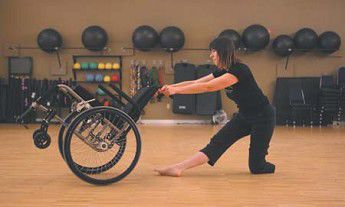 Andrea Jerabek, 42, rehearses a routine on March 24 to music at her YMCA in Gig Harbor, Wash., that incorporates her wheelchair for a performance.<br><i>Ken Lambert/The Associated Press</i> 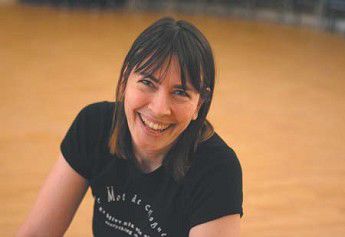 Andrea Jerabek, 42, rehearses a routine on March 24 to music at her YMCA in Gig Harbor, Wash., that incorporates her wheelchair for a performance.<br><i>Ken Lambert/The Associated Press</i>

GIG HARBOR, Wash. - She warms up in the studio, body lithe, elastic as she stretches before the wall of mirrors. Then the music heats up and she's balanced on one leg, the other extended. An arm forms an arc above her head before she sweeps low, touching her wheelchair. Then she's spinning and flying, incorporating the wheels into her pattern of dance.

Andrea Jerabek's passion for the art began long ago when she was a little girl in pink tights pattering across the polished wood floor of the dance studio in New York, where she could almost forget the deformed foot that in the future would be both a curse and a blessing.

She decided to have it amputated in 2005 to eliminate the constant pain, and now uses a wheelchair or a prosthetic leg.

Today, Jerabek, 42, and a social worker, is an ambassador for integrated dance, which often blends disabled people, their support equipment and sometimes able-bodied dancers in performance.

Those who practice integrated dance put it this way: If dance is an expression of the human spirit, then it should be embraced by people of all abilities. That's what Jerabek tells amputees at Harborview Medical Center, where she performed on Tuesday.

It's also what she tells children or the elderly whom she teaches: anyone can move, anyone can dance. Sometimes dance even heals; As she explored new forms of dancing - integrating her wheelchair into the moves, winning praise for her grace and ability - her confidence grew.

Raised in Briarcliff Manor, N.Y., Jerabek was always in pain, physically and emotionally. She had to wear different sizes of shoes, endure a painful leg-lengthening surgery and use crutches. At the time, she said, her classmates were anything but kind.

So as her 25th high-school reunion approached, she was amazed one day to get an e-mail from an old classmate. The classmate thanked her for defending her once when other girls bullied her because she was wearing a cast. The knowledge that she had not been alone in the suffering gave her new courage, and prompted Jerabek to then contact a woman who had once been her worst tormentor.

"I have changed since then," the woman told her. Jerabek was amazed. As Alito Alessi, founder of DanceAbility International, says, attitudes toward the disabled are changing. "Just look at TV, there are people with disabilities all over, as it should be."

In the past 20 years, integrated dance went from virtually nonexistent to mainstream, Alessi said. "People are people and only stopped from making art by isolation," he said. "We do what we can to eliminate that" by giving opportunities for dancing to anyone, those who dance standing up or sitting down, he said. His group now has chapters in 15 countries.

Light Motion founder Curtiss said she's been gratified to see the company she started become a touring production, which now attracts even dancers without disabilities.

"People who see us are generally very excited about it. It changes most people's perspective about what dance and disability is all about," she said. "They don't look at the wheelchair the same way again."

Verdi-Fletcher also said that "we went from ground zero to abundance" - regarding both those who audition and those in the audience. She has a dance school in Cleveland and her troupe tours nationally and has prompted the growth of similar companies in Europe.

Jerabek, who has danced at Light Motion's monthly jam sessions, loves "to tell kids how to respect others and that we're all different in different ways. Today, as far as disabilities go, kids are very savvy," she said.

She hopes her former high-school classmates are now enlightened. She's bought her plane ticket and reunion dinner ticket for later this month; she's going back, not to brag, not to show off, she said.

"It's much more meaningful to me to see this one person who changed her life."