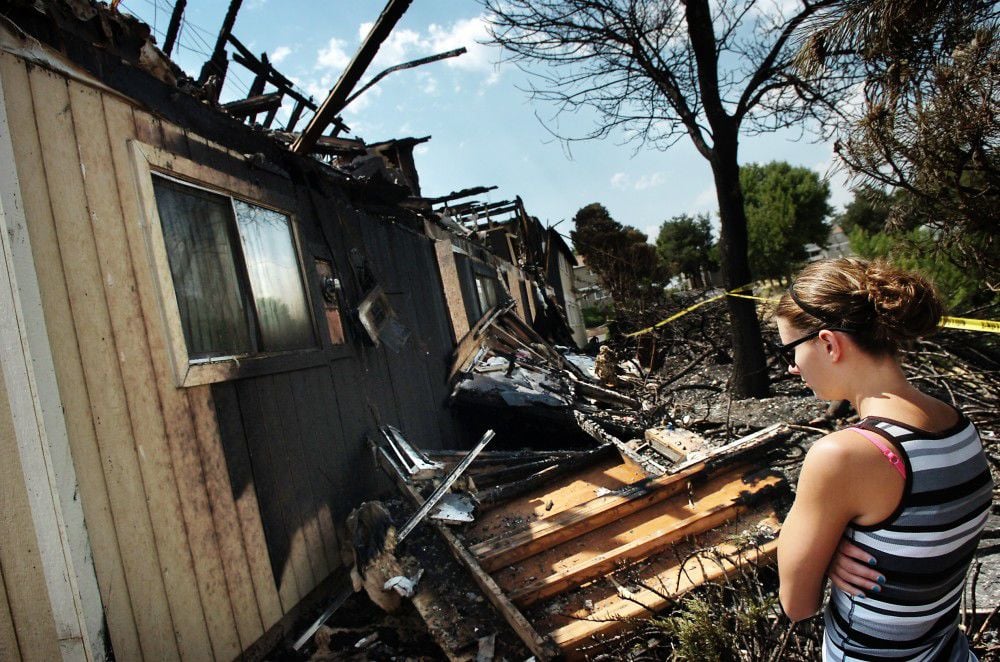 <p>Former South Hills Apartments resident Dana Kopp looks at items from her apartment that was destoyed iby a fire Saturday.</p> 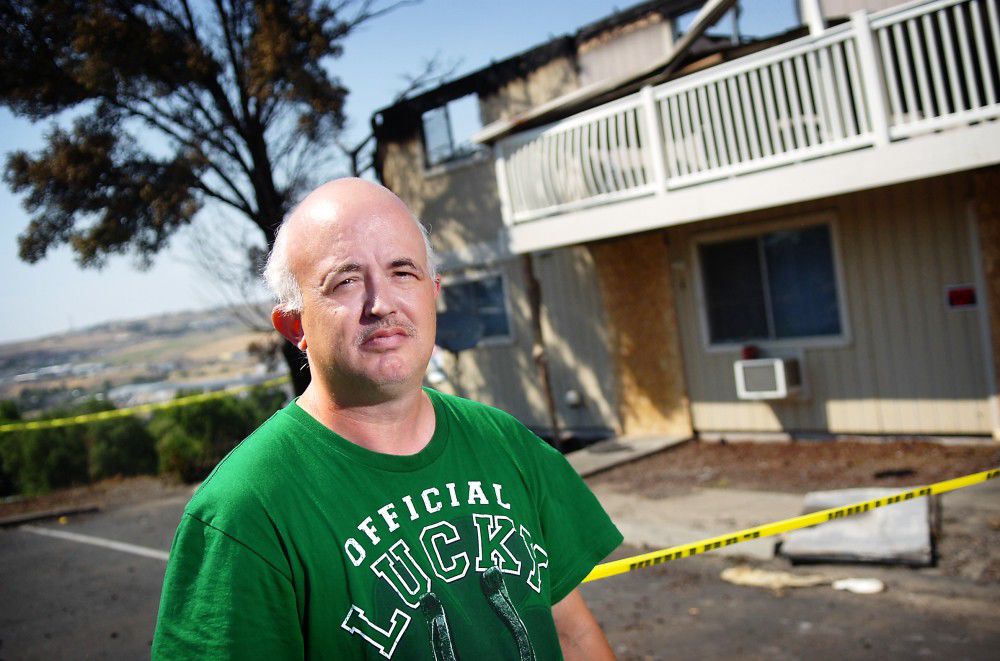 <p>South Hills Apartment resident Mike James Jr. was at a neighbor's when he saw smoke coming from the area of his apartment Saturday.</p>

<p>Former South Hills Apartments resident Dana Kopp looks at items from her apartment that was destoyed iby a fire Saturday.</p>

<p>South Hills Apartment resident Mike James Jr. was at a neighbor's when he saw smoke coming from the area of his apartment Saturday.</p>

Mike Dames Jr. stood chatting with a friend Saturday afternoon when he spotted smoke coming from the direction of the South Hill Apartments where he rents. Leaving his two sons with the friend, he tore home.

I jumped a six-foot fence and didnt even touch it, he said. I was all adrenaline.

Heart pumping wildly, he watched the apartment where he had lived for two-and-a-half years disappear into a wall of smoke and flame.

In the next complex over, Dana Kopp and roommate Beau Lewis had noticed smoke wafting from their air conditioning vent. A quick look out the window revealed their building and the next one over (Dames) were ablaze.

I grabbed my purse, Kopp said. Beau grabbed his phone and wallet and we ran.

Kopp, a waitress at Crabbys and Lewis, a professional steer wrestler, drove about a mile to Les Schwab Tires where their other roommate works. The trio, all 21, sat and watched the smoke rise over the trees.

We didnt want to watch our apartment burn down, she said.

In the hours that followed, Kopp said, I couldnt hold myself together. I cried. I was a total wreck until the next morning.

South Hill Manager Teri Prock learned of the fire when her niece called her cell phone while Prock ran errands. She drove home and rushed toward the flames.

It was my worst nightmare come true, she said. All I could do was be someone they could hold on to while their homes burned. I cried all day  I know every one of my tenants personally.

All three  Dames, Kopp and Prock  had fallen quickly into a state of shock common to fire victims. Prock hadnt lost her home, but she lived it vicariously.

The first reaction is shock, said Mary Post, a retired clinical social worker volunteer with the American Red Cross. That can last a short time or can go three or four days.

When the Red Cross shows up and the community starts to rally, Post said, most fire victims begin to grasp the reality of their situation and can switch into problem-solving mode.

Most people are able to shift gears and go to plan B, said Post, who lives in Portland.

She said what comes next, though, varies widely. Every one of the fires approximately 60 victims will go through the healing journey in their own way.

Its a grieving process  the steps are not necessarily lineal, Post said. You can be sad one minute and angry the next and then go back into denial. It is difficult to predict precisely.

Monday morning at the South Hill Apartments, the smell of smoke still hung in the air. Two buildings sat as charred skeletons. The singed pages of a novel and other debris scattered a field next to Dames first-floor apartment. A partly-melted metal bed frame sat twisted on the second floor. An eerily undamaged lace curtain showed through a cracked window in Kopps building.

Both Kopp and Dames had lost everything. Dames worried about the loss of a $600 prescription he had just picked up for his 8-year-old son Christopher who has epilepsy. Copp lamented a cashiers check that had burned  she had closed out a bank account and picked the check from her mailbox the day before the fire. Both expressed gratitude that no one was hurt, but couldnt deny life is tough right now.

Kopp said she is forcing herself to move on.

I have to accept that Ive lost everything and have to start over, she said.

Dames hadnt changed his shirt for a couple of days. Ironically, it is Kelly green with the words Official Lucky Green Shirt.

Prock telegraphed exhaustion as she sat behind her managers desk fielding phone calls from community members offering to help and burned-out tenants. With only two empty apartments to offer victims, she is distressed about having to play God.

Dames and his sons signed papers for one of the units Monday afternoon. Kopp is settled into a motel, with Red Cross footing the bill until Wednesday.

Post offered hope. Eventually, she said, a new normal will develop. How quickly depends on a variety of factors including financial resources, how many previous traumas, the support of family and friends and even whether the trauma was natural or manmade.

In this case, the cause remains undetermined. The fire started in the field below Dames complex.

Kids often dont have the language that adults do, she said, saying they sometimes act out or become clingy.

Dames worries a little that his new apartment is only a stones away from his old one. His sons, Christopher and Clifton, 6, will see the charred shell of their last home for months to come. Still, Dames seems determined his little family will survive the trauma.

You can sink or swim, he said. Were gonna swim.