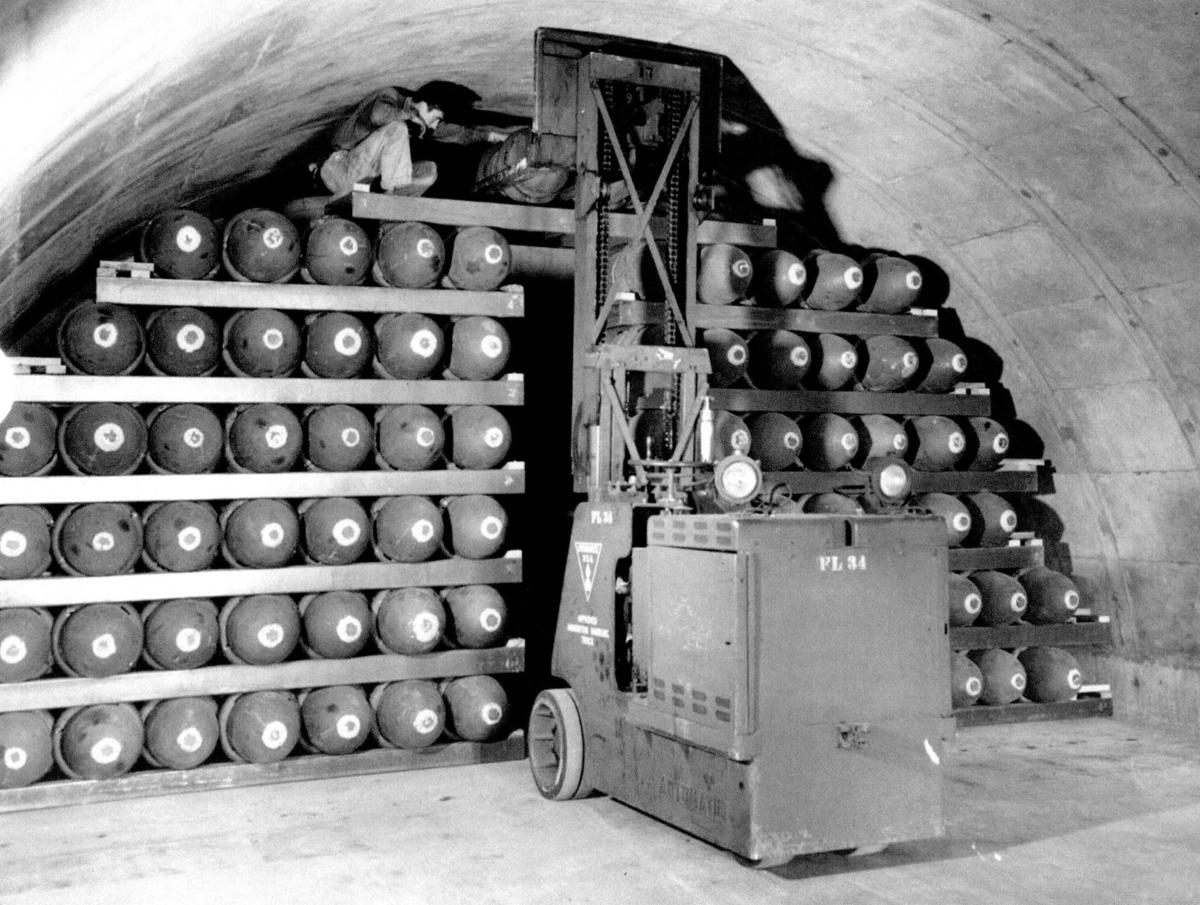 A worker inside an igloo at the Umatilla Ordnance Depot stacks 500-pound bombs similar to the ones that exploded on March 21, 1944. 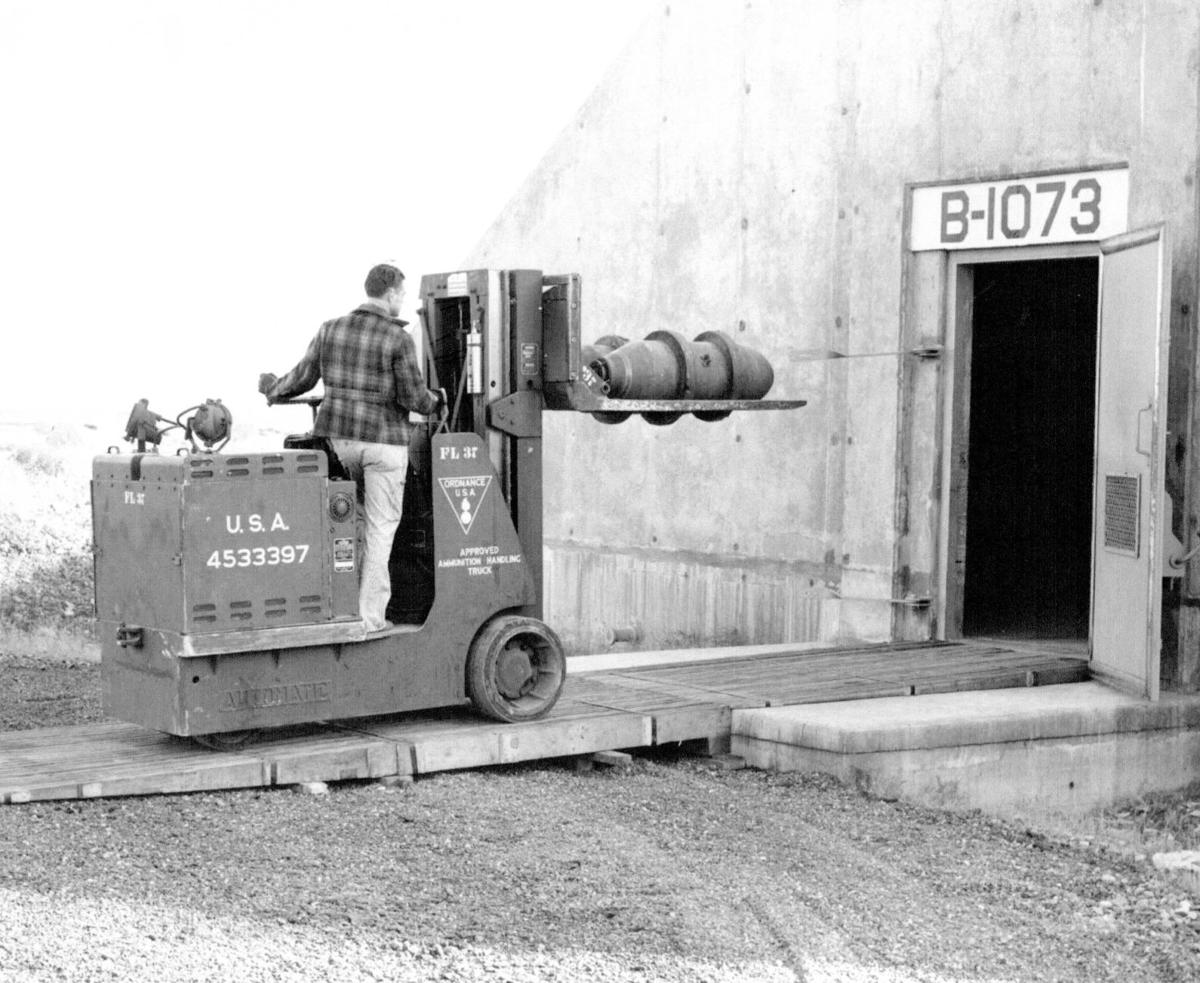 A Umatilla Ordnance Depot worker loads a 500-pound bomb similar to the ones that exploded on March 21, 1944, into an igloo.

A worker inside an igloo at the Umatilla Ordnance Depot stacks 500-pound bombs similar to the ones that exploded on March 21, 1944.

A Umatilla Ordnance Depot worker loads a 500-pound bomb similar to the ones that exploded on March 21, 1944, into an igloo.

It was a cool spring night March 21, 1944, when Kenneth Fraser took a crew of civilians out to igloo B-1014 at the Umatilla County Ordnance Depot just outside Hermiston.

Fraser, age 40, had a wife and four children waiting for him at home in Irrigon. He had moved the family there from Idaho two years earlier, switching careers from logging to crew foreman at the Depot.

That night 75 years ago, Fraser was accompanied by Alice Wolgamott, 20; Lance A. Stulz, 40; Hiram Cook, 26; William Sanders, 30; and Harry Sever, 33, as they unloaded 500-pound bombs into the igloo. Two other members of his crew, Glenn Long and Cecil Pennington, stayed behind to work at a railroad site.

At 9:29 p.m. something went wrong. Later, some would speculate that one of the bombs malfunctioned. Others thought it might have been dropped “just right.”

Whatever the case — the mystery has never been completely solved — a massive boom shook the depot as the igloo containing 264 bombs exploded, killing all six people.

Clara Ellen Fraser Brown was 15 when her father Kenneth was killed in the explosion, which leveled the specially reinforced concrete bunker and destroyed two vehicles. It took hours to ascertain who had died in the explosion, as there were no remains to identify.

“We had nothing to bury,” she said. “It was just a horrible thing.”

Most of those who were working 75 years ago at the Depot are no longer living. Evelyn Guerrant Thomas of Milton-Freewater, who died in 2015, told the East Oregonian in a 2010 interview that she was waiting in a car at to go home when the blast caused her to hit the ceiling. She was in a dress and high heels, but immediately reported for duty and visited the still-hot crater in the sagebrush with photographer Jimmy Drake to document the scene.

Linda Gilleese told the Hermiston Herald in 2008 that the front axle of one of the vehicles landed 20 feet from her desk at her office nearly a mile away.

In Hermiston, shock waves from the blast rippled through the city, shattering plate glass windows downtown and knocking merchandise off store shelves. Some residents who had been outside reported seeing a flash of light in the direction of the Depot about 15 seconds before the concussion reached them.

N.W. O’Donnell, the local manager of Pacific Telephone & Telegraph Co., called the company’s Pendleton office after hearing the boom, and was surprised to hear the explosion a second time through the phone as the sound reached Pendleton 30 miles away.

Emotional shockwaves came next, as word of the explosion traveled, leaving the families of hundreds of ordnance workers to spend a sleepless night waiting to hear if their loved ones were among the victims. Brown remembers hearing her mother Minnie crying as a local minister brought the news after midnight.

The loss of the Fraser family patriarch hit them hard. Kenneth had always done whatever it took to support his family through the Great Depression, but even when he worked long hours he took time to play games like Chinese checkers with his children and train them to do quick mental math.

“He was a very intelligent person— very math-minded, and he loved reading when he had time,” Brown said.

The United States was at war, and the blast at a military installation brought to mind fears of sabotage. The military acted quickly, and the Hermiston Herald reported that all guards employed at the Depot were called into work immediately, taking “complete charge of the situation” and remaining on high alert the rest of the night.

The following Friday, a joint funeral service for five of the victims was held at the Pentecostal Tabernacle, presided over by Rev. S.E. Graves. Altogether, five women lost their husbands and 13 children lost their father.

Fraser’s family held their own memorial in Irrigon. Brown, who at age 90 is the last surviving member of Fraser’s immediate family, said her mother’s grave at Hermiston Cemetery has a plaque in his honor.

Little mention of the blast was made in subsequent editions of the Hermiston Herald — two brief notices the next week stated that contributions were being made to the families of victims, and that while there had been fear that the accident would put a damper on recruitment, “actual reports were that more and more workers were seeking employment at the Depot.”

The paper also praised the engineers for the U.S. Army who came up with the igloo design. The 1,001 cylindrical igloos with triangle fronts at the Depot were built off-center from each other to keep any explosion from setting off a chain reaction. The sandy soil and other design elements also kept the disaster from being magnified.

The 1944 explosion would turn out to be the only fatal accident at the Depot during its decades of use. Today, a simple white cross marks the spot, and a ragged chunk of the igloo serves as a memorial on the portion of the Depot that has been turned into a National Guard training facility.

A partnership of local government bodies known as the Columbia Development Authority hopes to gain ownership of the rest of the property sometime soon.

Don Russell, chairman of the CDA board, said the CDA plans to turn the section of the Depot with the igloos into a wildlife preserve managed by the Confederated Tribes of the Umatilla Indian Reservation. He said historical preservation is one of the last pieces being negotiated for the transfer, and the site of the explosion will likely end up featuring a plaque telling the story.

Brown, the spunky girl who delivered newspapers in boys’ clothes and won scholarships for college, became a teacher after her mother encouraged her to pursue a higher education. Now retired and living in Hermiston, she said she has been to several past memorials for the victims of the explosion in honor of her father.

“He did a lot of things in his life,” she said.