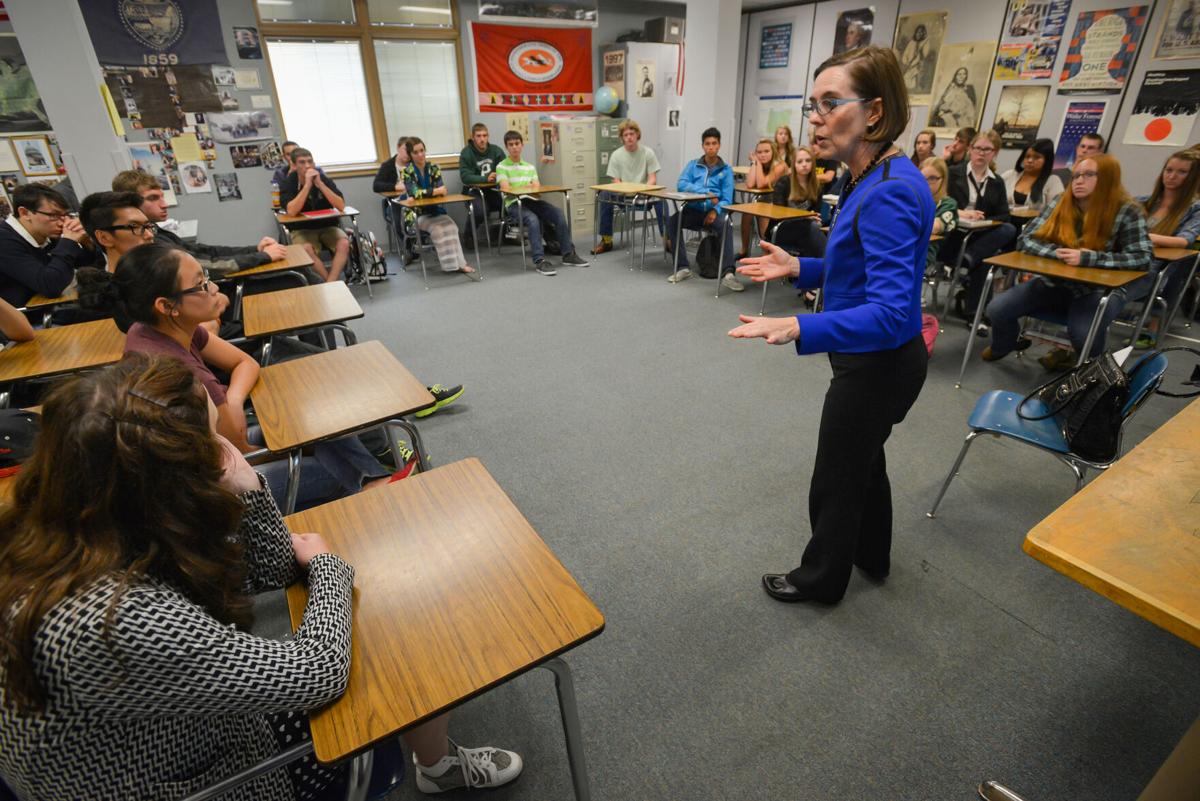 Then Oregon Secretary of State Kate Brown answers questions from students on Sept. 27, 2013, in Brian Johnson’s advanced placement government class at Pendleton High School. Gov. Brown on June 3, 2021, signed Senate Bill 513 to add a half-credit of civics education to the list of the state’s graduation requirements. 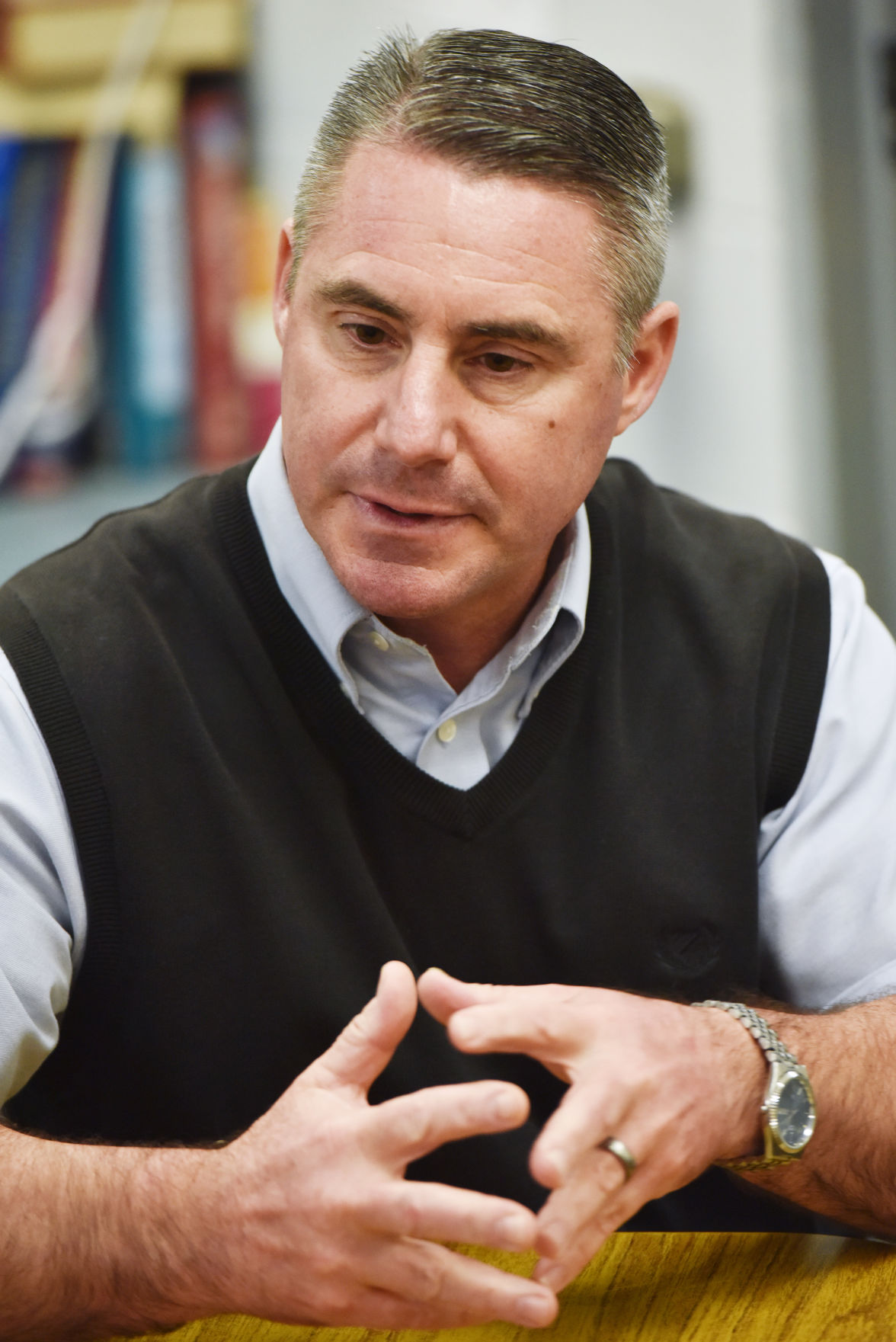 Then Oregon Secretary of State Kate Brown answers questions from students on Sept. 27, 2013, in Brian Johnson’s advanced placement government class at Pendleton High School. Gov. Brown on June 3, 2021, signed Senate Bill 513 to add a half-credit of civics education to the list of the state’s graduation requirements.

SALEM — Every high schooler in Oregon starting in 2026 will need to take at least one class in civics before graduating. But thanks to requirements at the local level, little will change for the two largest school districts in Eastern Oregon.

Gov. Kate Brown on June 3 signed Senate Bill 513, a law that adds a half-credit of civics education to the list of the state’s graduation requirements. The bill passed with strong bipartisan support, including every member of Northeast Oregon’s legislative delegation.

“It is a bill that begins the process of holding our schools accountable for teaching the next generation of Oregonians how to operate the most complex, complicated and often confounding form of self-governance in human history,” state Rep. Paul Evans, D-Monmouth, said, according to the Oregon Capital Bureau. “This is a call to arms for all good people to come to the aid of our Union.”

The bill may result in some new offerings at high schools around the state, but many districts, including those in Pendleton and Hermiston, already required it.

State law mandates all high schoolers obtain 24 credits to graduate, but only lists three credits of math, four credits of English and, now, a half-credit of civics as requirements. The rest of the state’s graduation requirements are handled by the Oregon State Board of Education, which maintains requirements for other subjects like health, physical education and electives.

The board gives school districts leeway in how students obtain three credits of social sciences, meaning schools could require classes like economic or personal finance instead of civics.

But in the many years Brian Johnson has taught social studies at Pendleton High School, civics always has been a must-take course for students.

Following years of the state focusing on STEM — science, technology, engineering and math — Johnson said he was glad to see civics getting a similar amount of attention.

“It’s our job to educate them on being a good citizen,” he said.

Johnson said Pendleton’s civics curriculum doesn’t just cover government history and the mechanics of how the federal government works, but also the Oregon Constitution and the Treaty of 1855, the agreement that created the Umatilla Indian Reservation.

Johnson said many students often come into his class disengaged with government and politics, not only because they don’t understand it but also because it seems like politics is angry and filled with conflict. He said it’s his and fellow civics teacher Kiana Rickman’s job to show students that government is worth engaging in.

Scott Depew, the Hermiston School District’s director of secondary instruction, said Hermiston has considered dropping civics in favor of offering personal finance classes, but the Legislature made the decision for them.

Although students tend to perform much better once they retake the test later in the year, Walker said it’s indicative of a world where surveys show that many Americans can’t even name the three branches of U.S. government. Civics could help fill those knowledge gaps and help turn students into active citizens.

Umatilla County could certainly use a boost in democratic participation. The county frequently finds itself at the bottom or near the bottom in terms of election turnout, a fact Johnson discusses in his classes.

Civics classes may not be the only change coming to the state’s high school requirements.

Senate Bill 744 — a bill that would suspend the essential learning skills requirement in 2023-24 and directs the Oregon Department of Education to review the requirement — already has passed the Senate and is on track for a vote in the House.

Since 2008, Oregon high school students have needed to demonstrate proficiency in reading, writing and math. While those requirements have been suspended during the COVID-19 pandemic, the bill would suspend them further and would prohibit the state from requiring them for graduation if a student has met their credit requirements.

Depew, the Hermiston administrator, said he wouldn’t miss them if they went away permanently. He added that essential learning skills haven’t been a hindrance to students graduating, but it is another hoop they need to jump through to get to graduation.

Matt Yoshioka, Pendleton’s director of curriculum, instruction and assessment, said he understands the value of essential learning skills, but fulfilling those requirements sometimes creates equity issues for students who struggle with tests.

While eliminating essential learning skills is a start, Yoshioka said he would prefer the state take a wider view of its graduation requirements. He said the state puts a lot of pressure on districts to graduate their students in four years, but districts should not be penalized if some students take a little longer to gain their diploma.