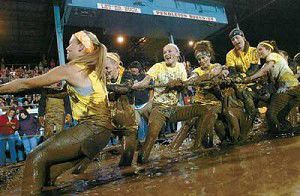 The girls of the Mad Mafia compete in the pit Wednesday evening during the 2008 Pendleton High School Mud Wars at the Pendleton Round-Up Grounds. <br><I>Staff photo by E.J. Harris 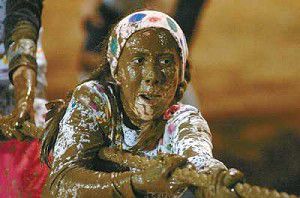 Senior Kelli McBee is covered from head to toe in mud as she competes with her team, the Bomb-Diggity-Baumers, during Mud Wars Wednesday in Pendleton.<br><I>Staff photo by E.J. Harris

The girls of the Mad Mafia compete in the pit Wednesday evening during the 2008 Pendleton High School Mud Wars at the Pendleton Round-Up Grounds. <br><I>Staff photo by E.J. Harris

Senior Kelli McBee is covered from head to toe in mud as she competes with her team, the Bomb-Diggity-Baumers, during Mud Wars Wednesday in Pendleton.<br><I>Staff photo by E.J. Harris

The extreme tug-of-war battle took place on a sludgy strip of track at the Pendleton Round-Up arena. By the end of the evening, team Glamorous Goddesses emerged victorious from the ooze.

The slimy tug fest started out as a fashion show of sorts. Some competitors wore eye-popping shades of florescent pink, yellow, green and orange, while others dressed in more practical camo outfits.

One team dressed in pristine white.

All wore plenty of duct tape in a rainbow of fashion colors. They wrapped the stuff around their shoes and taped their shorts securely to their bodies.

Action was fierce. At a signal from the referee, two teams of girls at a time jumped into the muck, fighting to gain purchase in the calf-deep mud. As they pulled, many slipped into the mire and struggle to use their feet like crampons.

By the end of the first round, the girls' clothing had turned a uniform shade of chocolate brown, but it looked like the duct tape was holding.

Parent and student filled the north grandstands and caught the slimy battles on cameras. PHS Principal Tom Lovell got close to the action with his Canon and dodged chunks of mud as he photographed the slimy battle.

Mud Wars ended an hour and eight minutes after it began. The winning Goddesses, all juniors, hugged and gave mud-splattering high-fives as they exulted to the rock band Queen's "We Are The Champions."

"It's a major adrenaline rush," she said. "After it's over you're out of breath - you work so hard."

The girls and their parents then turned their attention to getting home. Most wouldn't be jumping into the family sedan.

Sharayah Lehnert and Katrin Baar, a German exchange student, sat in the back of a white Ford pick-up, ready for the cold ride home. Lehnert was eager to shed the mud.

"Get hosed down in the front yard and then jump in the shower," she said, grinning.

A few minutes later, the truck drove off with the two muddy girls in the back.

Some of the money raised from 2008 Mud Wars will help Mikayla Davis, a senior who has been struggling with leukemia. During the evening, the announcer told the crowd Mikayla learned Wednesday her cancer had gone into remission.