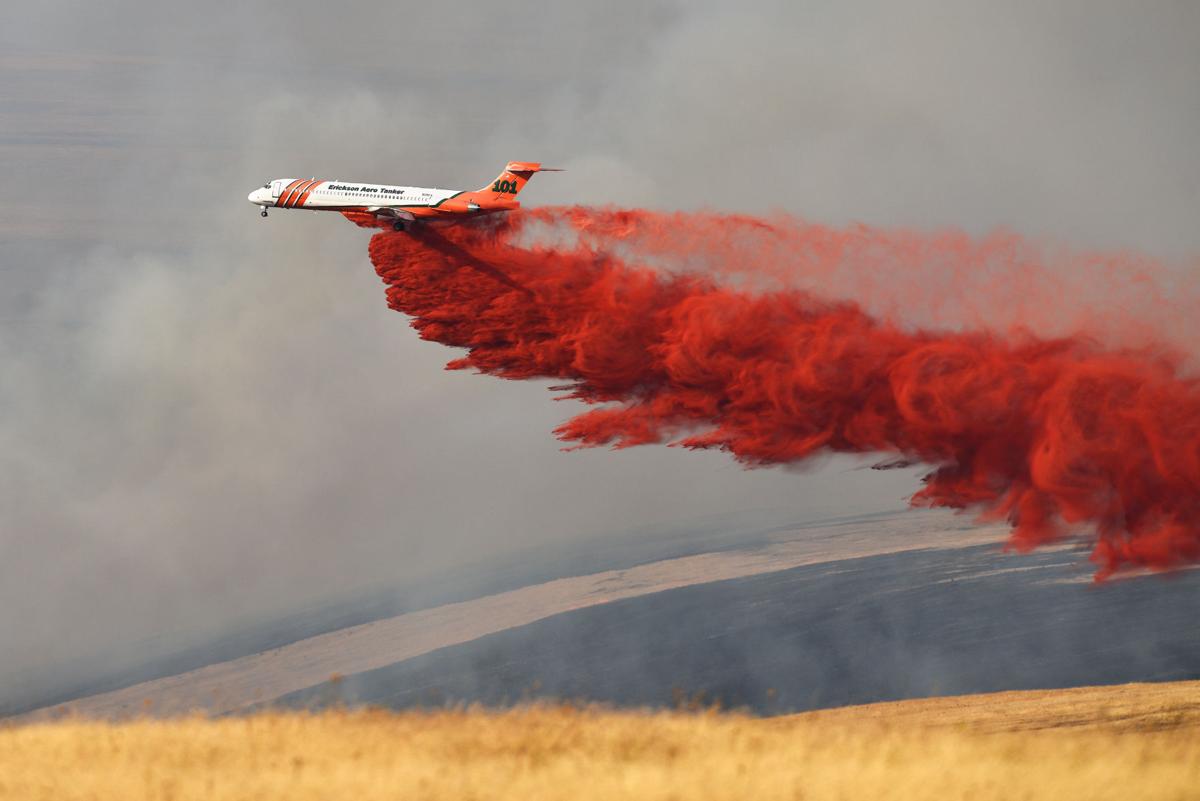 A firefighting air tanker drops a load of fire retardant into a draw in Harrington Canyon, southwest of Pilot Rock, as a large wildfire burned out of control in 2018. 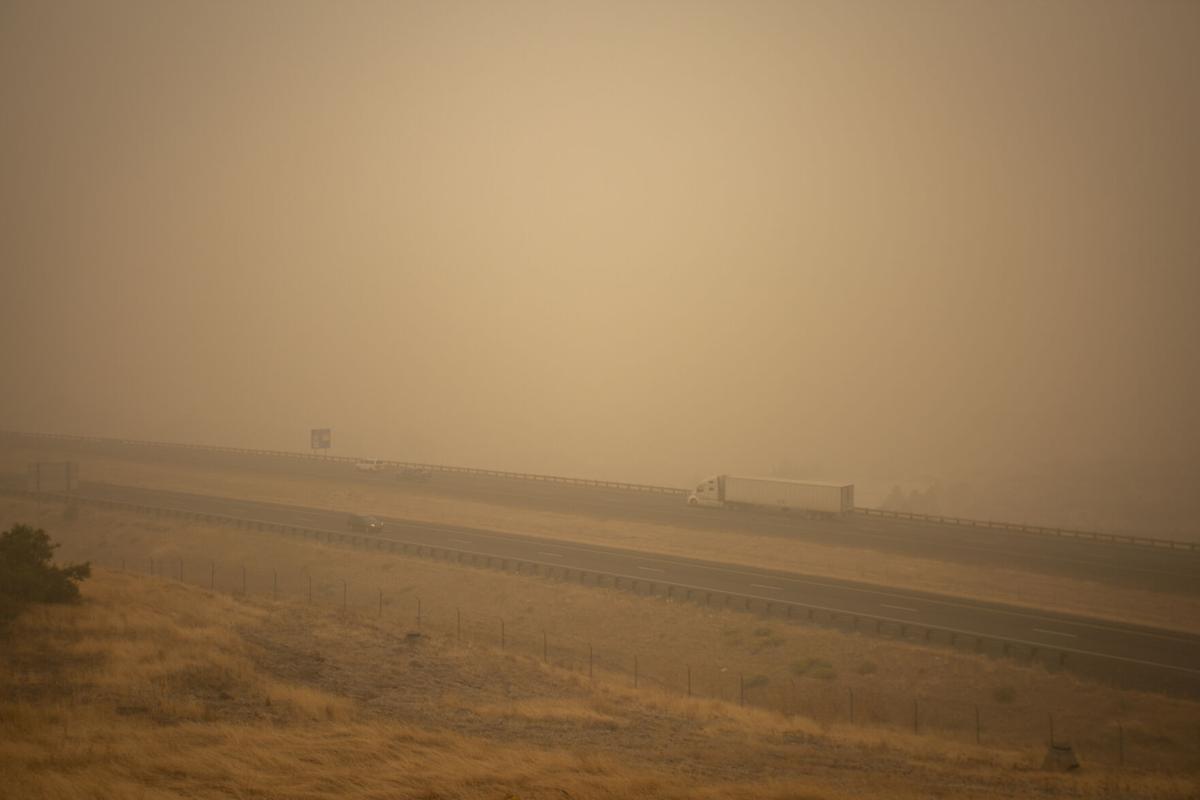 Dense smoke obscures Interstate 84 in Pendleton on Sept. 11, 2020, as a result of wildfires across the region. 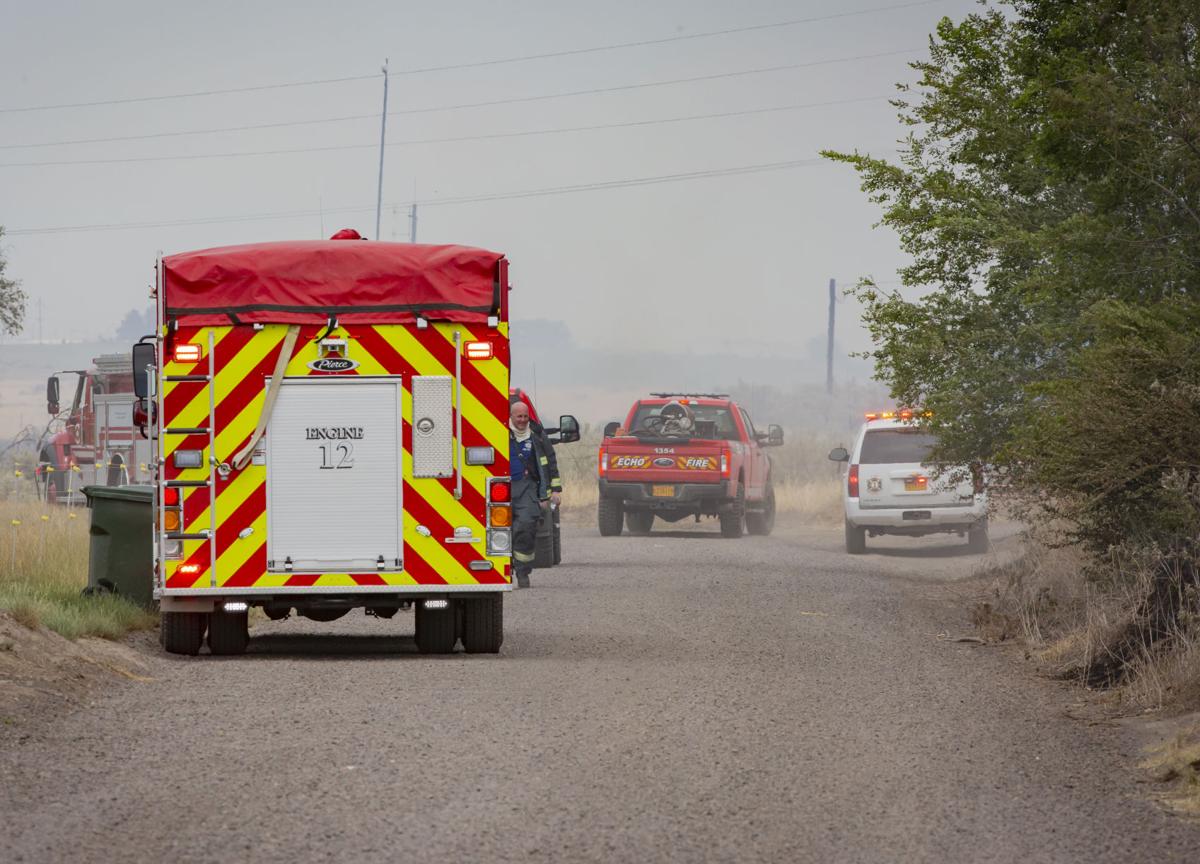 Smoke clogs the air as a result of a 7-acre grass fire on East Punkin Center Road outside of Hermiston on June 24, 2020.

A firefighting air tanker drops a load of fire retardant into a draw in Harrington Canyon, southwest of Pilot Rock, as a large wildfire burned out of control in 2018.

Dense smoke obscures Interstate 84 in Pendleton on Sept. 11, 2020, as a result of wildfires across the region.

Smoke clogs the air as a result of a 7-acre grass fire on East Punkin Center Road outside of Hermiston on June 24, 2020.

PENDLETON — Despite rain showers over the weekend in much of Northeast Oregon, fire officials say the region is still ripe for wildfires.

So far, the Pendleton area has been fairly quiet as far as human-caused fire starts go, but the district has had eight fires this spring and, according to Matt Howard, ODF’s Wallowa Unit forester, his jurisdiction has had 16 fire calls since April 1.

Besides dry conditions, the Pendleton National Weather Service predicts high wind storms as being the new normal for the region as the climate continues to warm.

“If we’re looking ahead, temperatures are gradually warming, which gives the possibility for thermal gradients across the Cascades to set up, creating greater westerly winds,” said Brandon Lawhorn, a meteorologist at Pendleton’s NWS office. “If they set up more often, we will see more of these high wind events or wind advisories, but how impactful they will be is in question. However, it doesn’t take much of a breeze and dry conditions to create that greater fire weather concern.”

The extended forecast for later in May, June and July across the Blue Mountains calls for above normal temperatures and below normal precipitation.

“In June and July, across the Columbia Basin and into Central Oregon, there is an above normal significant wildfire potential,” Lawhorn said.

Closer in, Lawhorn said, severe weather is predicted for late April and early May.

“The question is for the rest of this spring, will there be enough precipitation to hamper the drought outlook we are seeing in the area?” he said.

The Umatilla County Board of Commissioners voted unanimously earlier this month to declare a drought disaster and asked Gov. Kate Brown and U.S. Agriculture Secretary Tom Vilsack to do the same. Baker and Union counties have already declared a drought.

One bit of good news is two sources of increased funding for the state’s fire suppression efforts. Hessel said short-term funding through the Oregon Legislature’s emergency board gave the department money to bring on some seasonal employees early this year and stage a pair of single engine air tankers in The Dalles, within “striking distance” of Northeast Oregon.

A larger funding package, waiting approval by the full Legislature, is Senate Bill 762, which includes recommendations from the governor’s wildfire council. If approved, $150 million will be distributed among several state agencies for fire suppression, mitigation on private and public land, and to look at land use zoning and smoke impacts.

Hessel said ODF’s funding is split between the state’s general fund and landowners who pay an assessment on their acres for fire protection. This year, the northeast district will support 20 engines and a hand crew in Wallowa, Baker, Union and Umatilla counties, two single engine air tankers and a Type-2 helicopter stationed in Pendleton, and a detection plane based in La Grande.

The Umatilla National Forest fire staff is anticipating an above average fire year, as well.

“The good snowpack at higher elevations are something we appreciate, but the presence or lack of precipitation in June can also set the stage for what type of fire season comes at us here in Northeast Oregon and Southeast Washington,” said Darcy Weseman, a public affairs officer for the Umatilla National Forest.

Fire suppression staffing will be similar to last year, Weseman said, with 10 engines and six hand crews, along with several staffed fire lookouts.

“One constant that we deal with every season is that our workforce is often asked to fulfill resource requests for fires in other parts of the nation, through engines, hand crews and incident management team support,” she said.

These requests are filled based on local fire danger, and forest staff has historically been a large contributor to these sort of efforts, Weseman said, as fire resources often see multiple assignments across the Western United States.

Higher elevation snowpack is still holding up well in the Blue Mountains and the Wallowas where mid- and late-winter snowstorms pushed the snowpack well past the 100% mark. However, many of the lower elevation areas of the Umatilla and Wallowa-Whitman national forests did not get the snow, nor have those areas received any spring rain, according to Nathan Goodrich, a deputy fire staff officer for the Wallowa-Whitman National Forest. He said conditions aren’t good from a rancher’s standpoint, because there is little grass for livestock, but good for fire suppression, because there will be fewer fine fuels to start fires, like cheatgrass.

“Because they had different storm patterns the desert could be active in May and June,” he said.

The dry conditions have one other positive for land managers — opportunity to meet spring prescribed burning targets. Steve Hawkins, a fuels program manager for the Wallowa-Whitman National Forest, said some aspects of the forest are fairly dry, especially large fuels like downed logs.

The south end of the forest is dry and 2,000 acres have been burned on the forest already, Hawkins said, including 1,500 just this past week ahead of rain and snowstorms predicted over the past weekend.

“Near Baker City we’ve been way down on precipitation for the last two months, but one event can change things,” he said.

No prescribed burning has begun on the Umatilla National Forest yet, Weseman said, outside of pile burning on the North Fork John Day Ranger District.

PENDLETON — The Umatilla County Board of Commissioners in a Tuesday, April 20, meeting moved unanimously to declare a drought disaster in the …