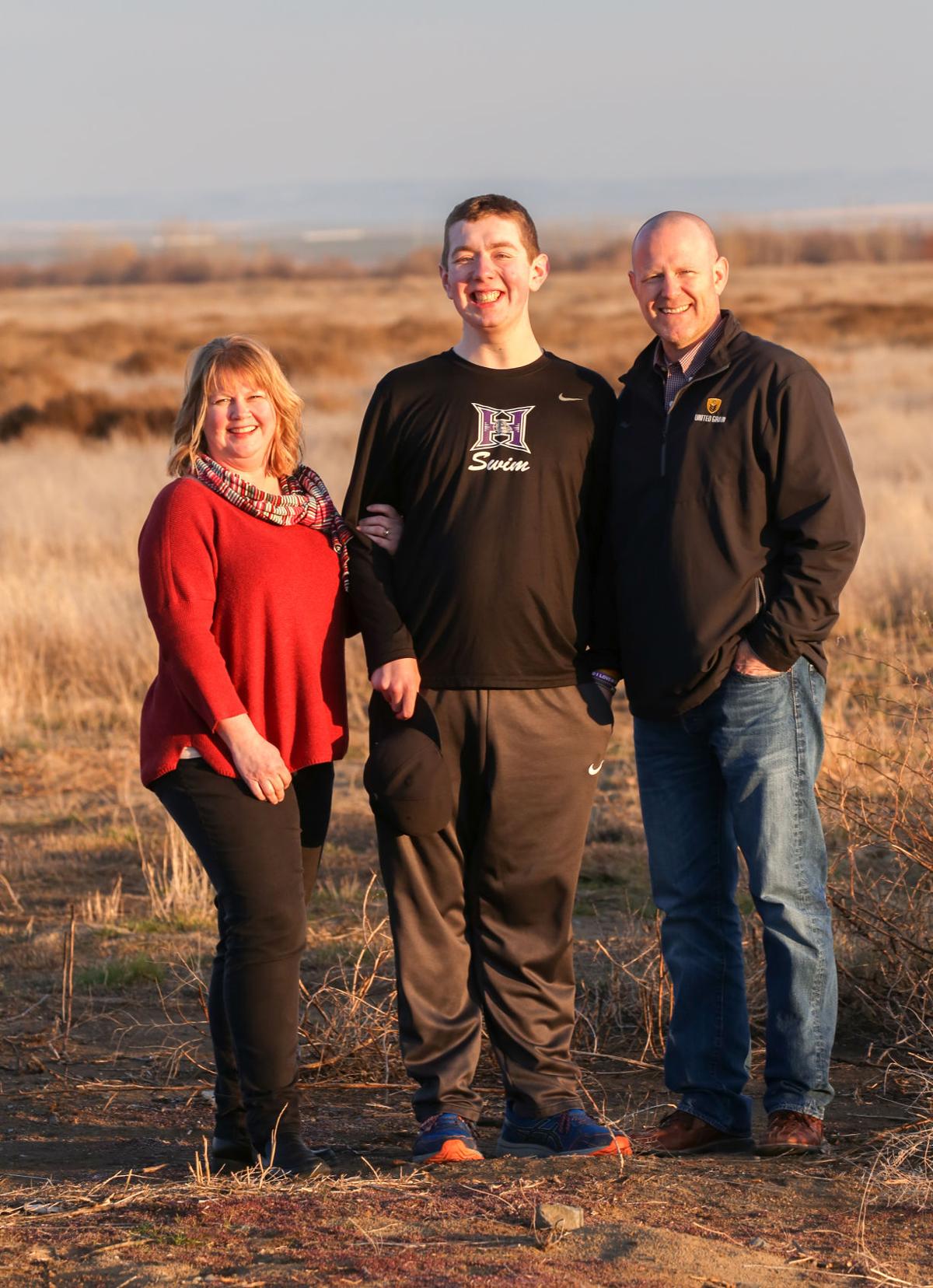 Rian Middleton poses with his parents, Cindy and Jason Middleton, who are two of the people in Rian’s extensive “village” of supporters, friends and fans. 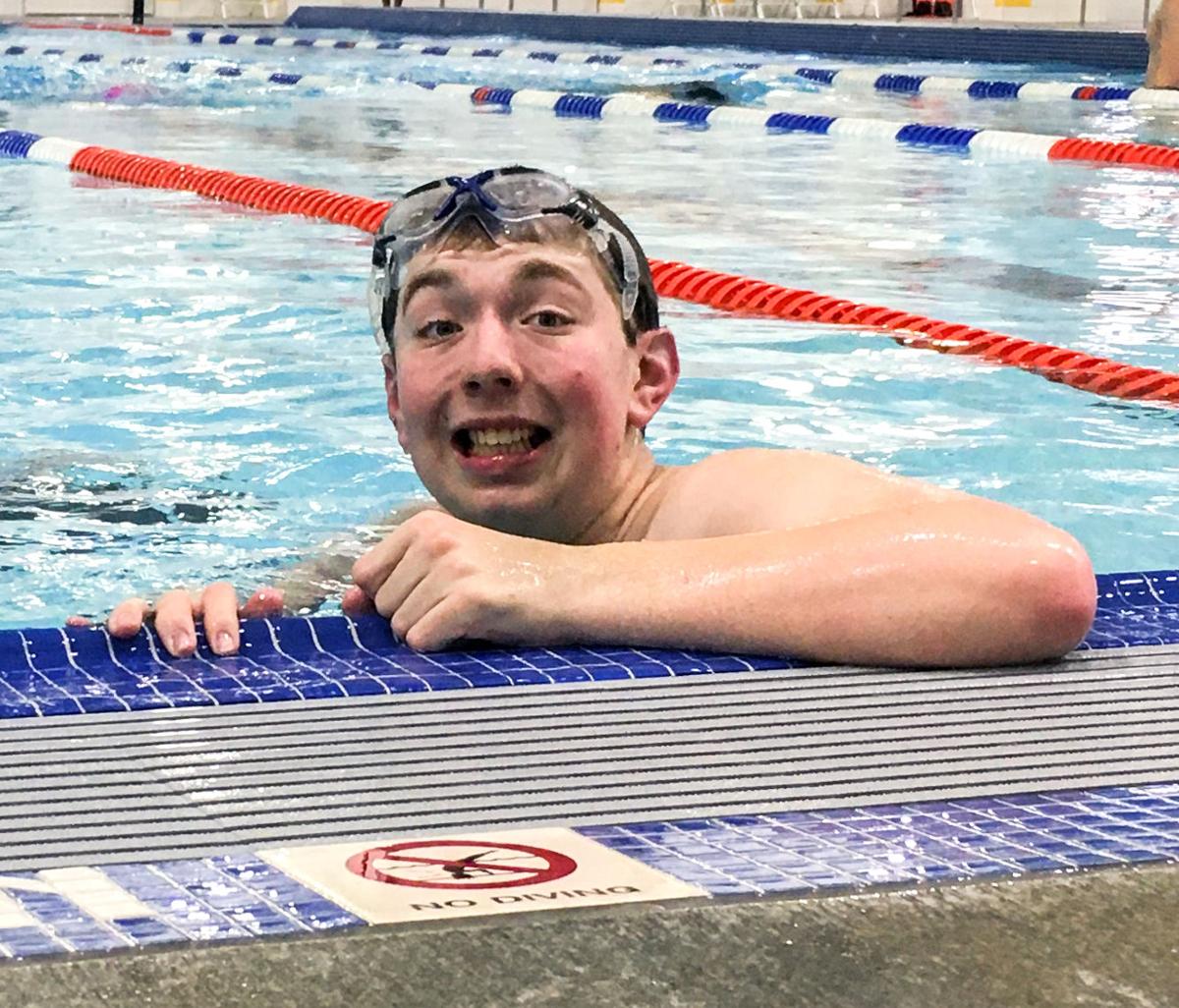 Rian Middleton catches his breath recently after working out at the Boardman Pool and Recreation Center where the Hermiston swim team practices. 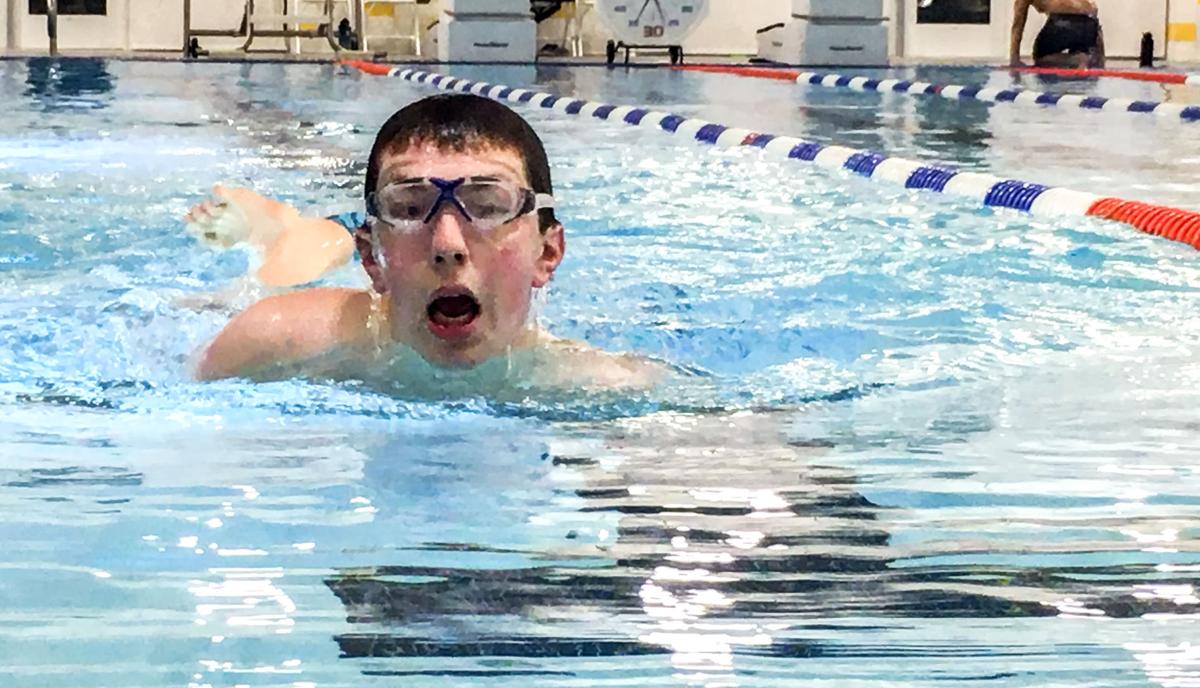 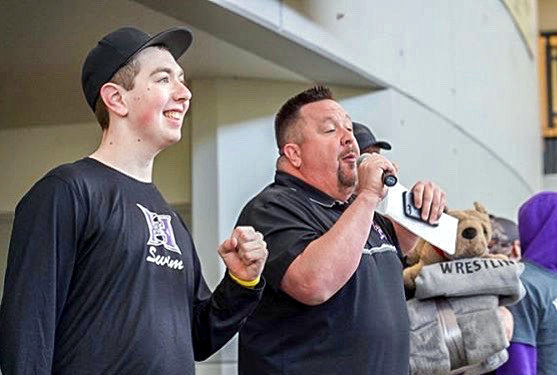 Rian Middleton listens as HHS Athletic Director Larry Usher introduces him at a send-off for the wrestling team and Middleton, the lone Hermiston swimmer competing in the Washington state swim and dive meet at the Weyerhaeuser King County Aquatic Center in Federal Way.

Rian Middleton poses with his parents, Cindy and Jason Middleton, who are two of the people in Rian’s extensive “village” of supporters, friends and fans.

Rian Middleton catches his breath recently after working out at the Boardman Pool and Recreation Center where the Hermiston swim team practices.

Rian Middleton listens as HHS Athletic Director Larry Usher introduces him at a send-off for the wrestling team and Middleton, the lone Hermiston swimmer competing in the Washington state swim and dive meet at the Weyerhaeuser King County Aquatic Center in Federal Way.

HERMISTON — Rian Middleton — the lone Hermiston High School swimmer to compete at the Washington state swim meet last Saturday — could once barely sit up and his parents worried that he might never walk.

As a baby and toddler, Rian missed most of the normal milestones. Instead of crawling, he tended to flop over as if his muscles couldn’t hold him up. Finally, Jason and Cindy learned why. Their son had a chromosomal abnormality and hypotonia, characterized by profoundly low muscle tone and high elasticity. His left side is also weaker than his right side.

“As a baby, he was a floppy guy,” Cindy said. “He had a couple of hip surgeries to keep his hips from coming out of their sockets.”

The little boy learned to walk using a walker. At age 3, he fell and broke a femur and did physical therapy in the swimming pool. His parents pushed their son to do as much as he could.

“We’ve always had high expectations and worked hard to make him the best he can be,” Cindy said.

Rian loved sports and decided he wanted to participate. He not only walked, but learned to swim and play basketball, baseball, soccer and golf.

The senior isn’t a standout athlete talent-wise. His personal best in the 50-meter freestyle of 48.34 seconds is slow in the world of high school swimmers. He competes in the adaptive division for swimmers with disabilities at district and state, and comes in last a lot in the regular season. Rian’s superpower is not swimming, say those who know him, but rather a contagious exuberance that touches everyone around him. Rian Middleton loves everyone and everyone loves him. It’s just one of those truths, like gravity.

Jason Middleton said his son is fearless and relentlessly joyful.

“Funny,” interjected Rian, who sat nearby. “I like people.”

Head swim coach Phil Lusted, in his first year with the HHS swim program, marveled as he watched Rian interact with other swimmers, officials and spectators at the meets.

“The other coaches knew him. The referees knew him,” Lusted said. “He has a community around him during meets. He gives everyone a high five on the way to the blocks. Almost all the swimmers from the other teams know his name.”

During the regular season, Rian swam in regular heats, always taking up the rear.

“He ended up swimming 75 meters,” Hamblin said. “We stopped him. When he got out, he raised his arms and went over and hugged the officials.”

On Thursday, HHS students gathered to send off the school’s wrestling team and Rian before they left for the Seattle area. As Rian and his coach stood in front, Athletic Director Larry Usher talked about Rian and his status as the school’s lone state swimmer. Rian grinned and pumped his fist to smiles from his classmates.

Usher smiled too. He has known Rian since Usher’s time as Sandstone Middle School principal. The two like to talk sports. Usher roots for the Ducks, while Rian prefers the Beavers.

The athletic director made the trip to the King County Aquatic Center in Federal Way, Washington, to cheer on his young friend on Saturday.

The pool was colder than Rian was accustomed and there was no ladder. That threw him a little. Though he earned personal bests at almost every meet this year in either the 50- or 100-meter races, he swam two seconds slower (about 50 seconds flat) during his state 50-meter performance. No matter. When Rian received his seventh place medal, he beamed and pumped his fist.

That’s Rian, said his older sister, Reed. He turns every occasion into a positive, social event.

In December, she said, the family stayed at a hotel in Portland one night. The next morning, Reed left Rian on the front sidewalk for a moment. When she returned, he had made friends with the valet, the bellhop and a lady walking by with her dog.

“Rian’s mission in life is to make friends,” Reed said.

“He’s so happy. Walking down the hall at school, every kid gets a high five from him,” said lifelong friend Violet Mitchell, who is a junior. “His high fives are legendary.”

Hamblin, who teaches fourth grade at Highland Hills, said Rian has a way of making people go out of their way to give back some of the joy he dishes out. In eighth grade, he and Hamblin ran the chain for Sandstone Middle School football program as a way to be involved in football, a sport his doctor forbids him from playing. During one game, the team decided to give Rian an experience he would treasure. Rian dressed down and went in for one play, an extra point attempt, a play that both teams had choreographed together.

“They handed him the ball and he went in,” Hamblin said. “He spiked the ball and put up his hands. The (Sandstone) team cheered for him. The other team came over and shook his hand.”

Longtime friend Kamryn Cooke often picks up Rian and gives him a ride to school via the drive-up lane at Dutch Bros. She called him a positive force.

This spring, Rian will leave swimming behind for golf. He’ll walk with his class in June at graduation, though he’ll return in the fall and continue there until age 21 as a student with disabilities. No doubt another influx of students will experience the legendary high five of Rian Middleton.

“He is on a mission to bring joy to the entire world,” Reed Middleton said of her brother. “He takes it to everyone.”