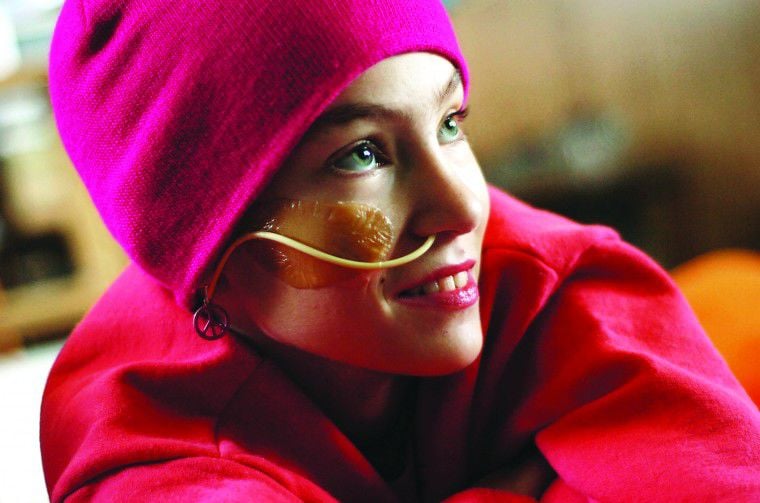 Zailynn Mitchell was just like any 14-year-old girl until being diagnosed with a tumor on her liver on Sept. 22. 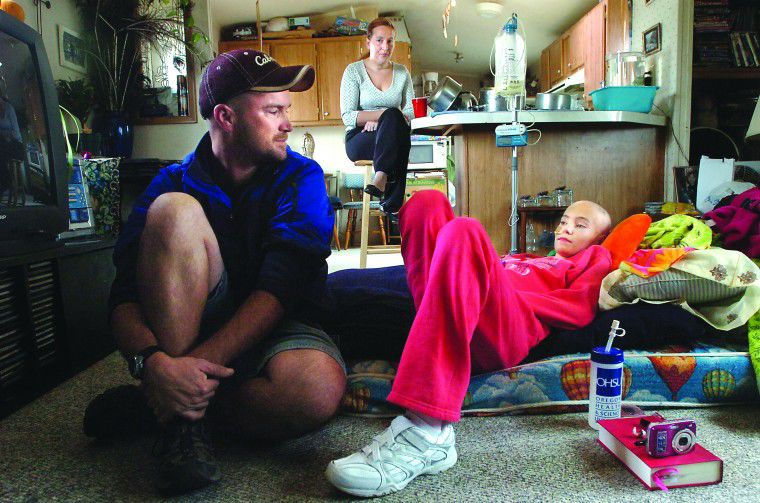 Zailynn Mitchell, seen here with parents Mark and Nora Mitchell, spends most of her days on a bed in the living room now that she is undergoing chemotherapy to reat a tumor on her liver.

Zailynn Mitchell was just like any 14-year-old girl until being diagnosed with a tumor on her liver on Sept. 22.

Zailynn Mitchell, seen here with parents Mark and Nora Mitchell, spends most of her days on a bed in the living room now that she is undergoing chemotherapy to reat a tumor on her liver.

Two months ago, Zailynn Mitchell was much like any other 14-year-old. An athletic, ambitous, straight-A student, she was active in her church and excited to start her first year at Hermiston High School.

That all came to a skidding halt Sept. 22, the day Zailynn texted her dad from school, saying she didnt feel well. Shed had sharp pains under her ribs for about three days and felt short of breath.

Zailynns parents, Mark and Nora Mitchell, drove her to the emergency room at Good Shepherd Medical Center. An ultrasound and a CAT scan later, they learned Zailynn had a tumor on her liver the size of a football.

We were kind of stunned, to say the least, her mother said.

Zailynn had felt more tired than usual, but she recently had run a mile in her PE class and helped her mom paint their house. She also maintained a busy schedule. A member of the Hermiston High School Honor Society, she volunteered with the Builders Club  a junior version of the Kiwanis Club  and babysat during Tuesday night Bible study at Assembly of God.

We actually talked to her about cutting down (on activities) because it was too much, Nora Mitchell said.

Zailynn had always been healthy; it was rare, her mother said, that her daughter got a cold.

After her initial scans at Good Shepherd, the Mitchells whisked Zailynn to Doernbecher Childrens Hospital in?Portland.

The next day, a surgeon biopsied the tumor and announced he was 99 percent sure it was cancer. During the biopsy, he installed a port under Zailynns left clavicle in order to ease the administration of chemotherapy drugs.

Zailynn had a malignant tumor, the Mitchells learned, and because it was growing through her liver  not on it  removal was not an option. Her doctors will consider removing the tumor later, after it has shrunk. She is already on a waiting list for a liver transplant.

Zailynn is now five weeks into a grueling 18-week course of chemotherapy. Shes lost her hair and 20 pounds. She suffers intense nerve pain from one of the drugs, Vincristine.

It gets to the point where shes in tears and theres nothing we can do, Nora Mitchell said.

Zailynn lives life from her bed. She reads  shes in the middle of Fablehaven: Keys to the Demon Prison  plays sudoku and watches television. She would like someone to teach her knitting. At some point, a tutor will begin helping her with school work, although her chemotherapy schedule, and her resulting sickness, may hinder that.

Mark Mitchell has had to quit his construction job.

Caring for her is full-time job now, he said. One of us works days with her and the other works graveyard.

It doesnt help that their insurance company, the Oregon Health Plan, is reluctant to fill many of Zailynns prescriptions. Her doctor prescribed her a nausea medication, Zofran, for instance, but OHP will only fill nine of the 100-pill prescription. For the Mitchells to buy the rest  she is supposed to take a pill every 6 hours  would cost them roughly $1,000.

OHP?also balked at filling Zailynns Oxycontin prescription.?Its a name-brand medicine, a representative complained to Mark Mitchell, and Zailynn doesnt need a months supply at once.

They keep turning down all of our prescriptions, and we have to keep fighting for them, Mark Mitchell said. They dont want to pay for it.

But the Mitchells have been blessed with supportive friends and family. A friend of theirs set up a bottle and can drive at Ace Hardware that netted about 150 $20 bags. Their yard still is piled with bags of pop cans that Mark Mitchell has yet to redeem.

There were people there (at the can drive) that Id never seen or met before, Mark Mitchell said. They just stopped to help.

Walmart Distribution Center workers adopted Zailynn as a Heart Kid. Her name and face will appear on Walmart trucks and shell get a new computer with a webcam so she can attend classes from afar.

Hermiston High School students formed a Sparrow Club for Zailynn, a nonprofit organization through which people can donate toward her care.?Sparrow Club members and other supportive students are holding a spaghetti feed sometime this month.

Assembly of God members have sent her packages and countless good wishes. They pray for her constantly. Zailynn’s best friend’s father, Lonnie Perry, started a website for Zailynn, http://zailynn’sfight.hpage.com, on which many have posted encouraging words. “Oh Sweet Zailynn,” one reads, “I’ve been praying for you every day and can’t wait to yell, SHE?BEAT?IT at the top of my lungs.”

At Clara Brownell Middle School, Zailynns old school, students set up a donation box so kids could give books, DVDs and other things. Such gifts are particularly helpful, Zailynn said.

I like that theyre giving me things to do so I dont get bored, she said. Although I still get bored.

When asked if she keeps up with her friends at school, she said, Uh huh. Texting.

Thank God for that unlimited plan, her mother added.