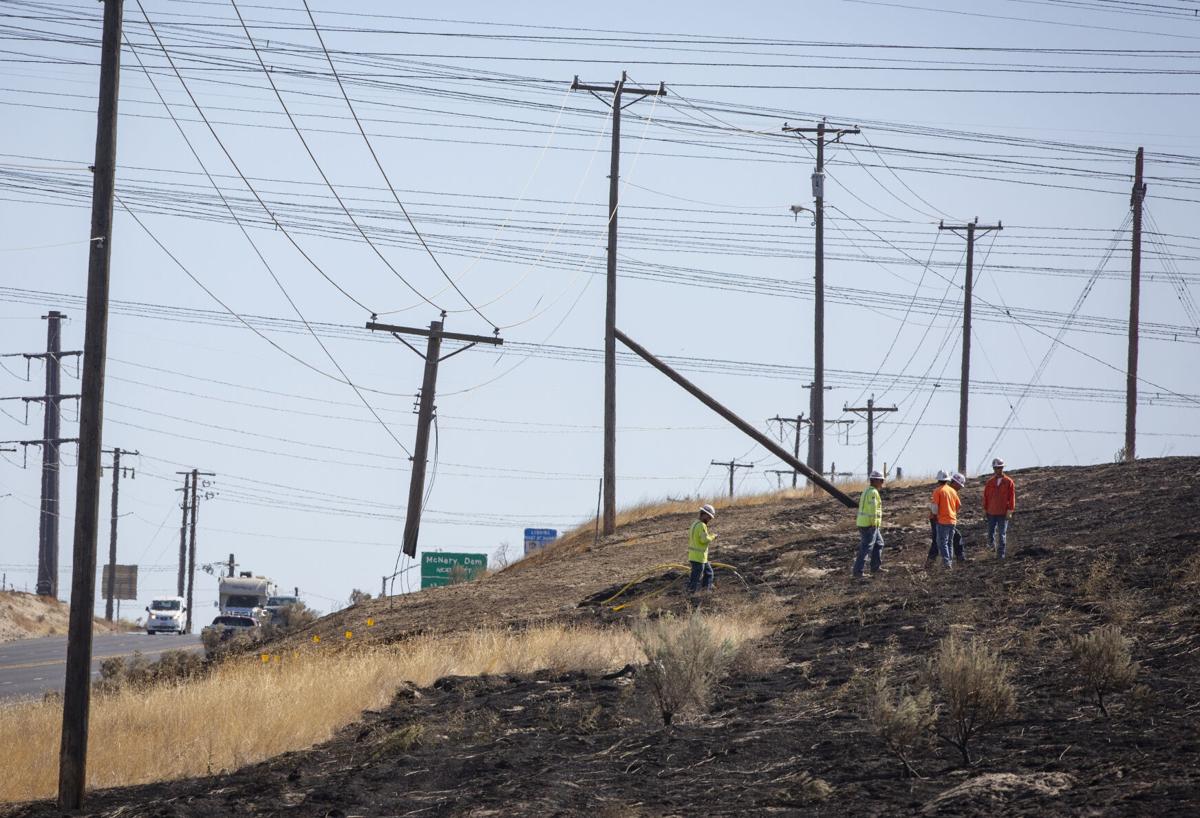 Line crews examine a utility pole on Tuesday, Sept. 8, 2020. The pole snapped off after heavy winds and a grass fire swept through the grasslands adjacent to Highway 730 east of Umatilla on Monday, Sept. 7, 2020. 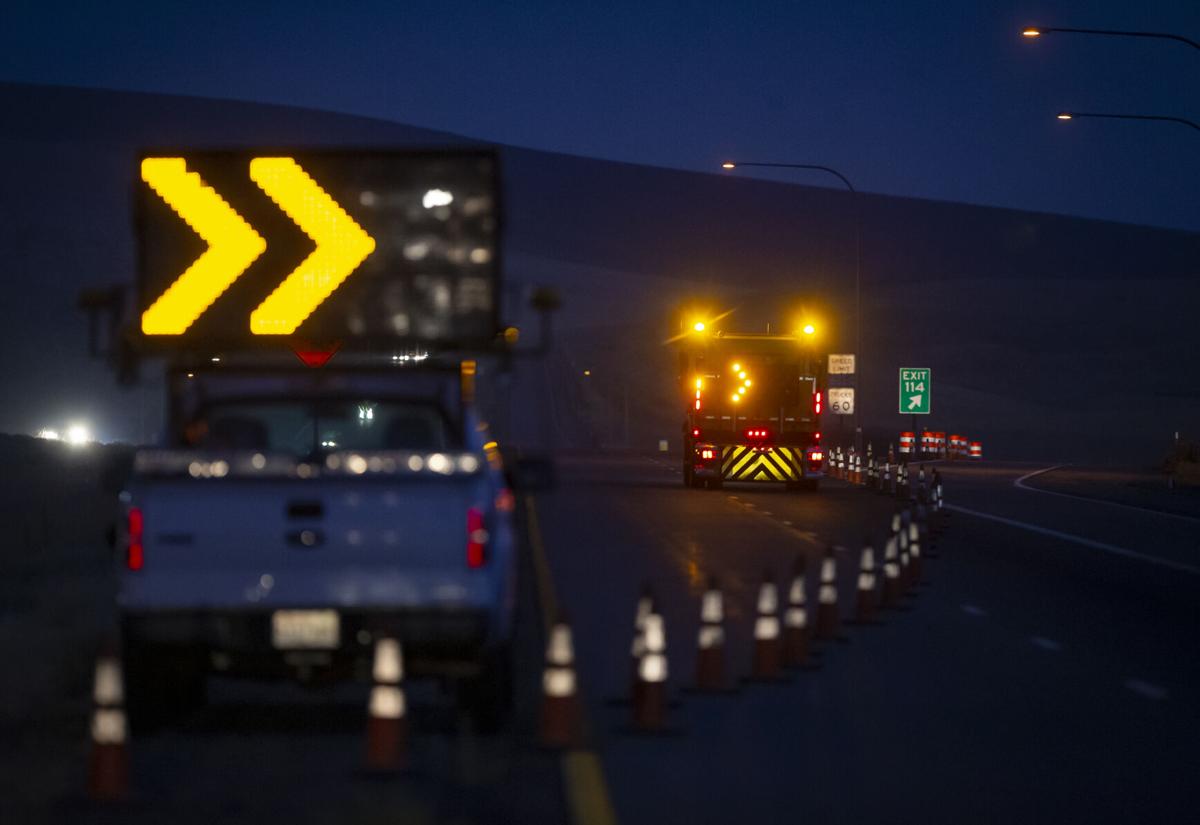 A roadblock reroutes traffic at Exit 114 on Interstate 84 south of Kennewick, Wash., on Monday, Sept. 7, 2020. The interstate was closed for several hours due to heavy smoke and blowing wind as a result of fires near Umatilla. 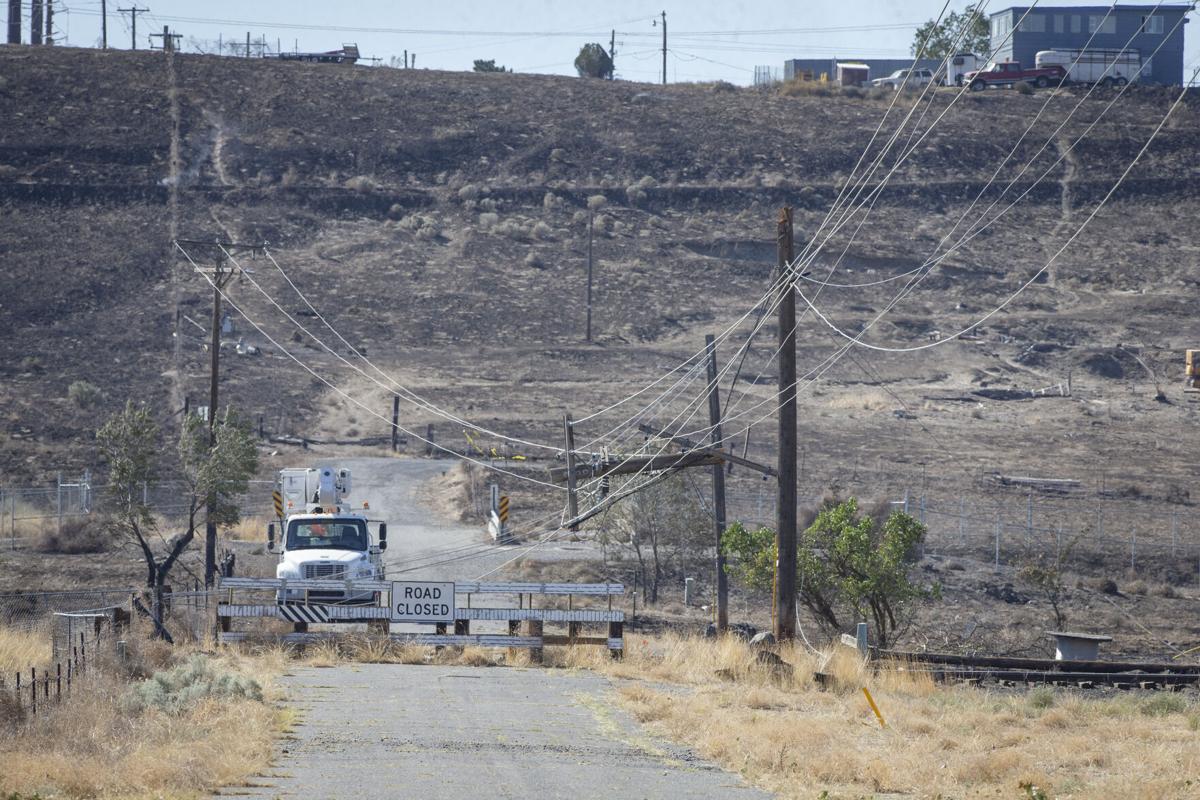 A broken utility pole hangs by its wires after high winds and a grass fire swept through the area outside of Umatilla on Monday, Sept. 7, 2020. 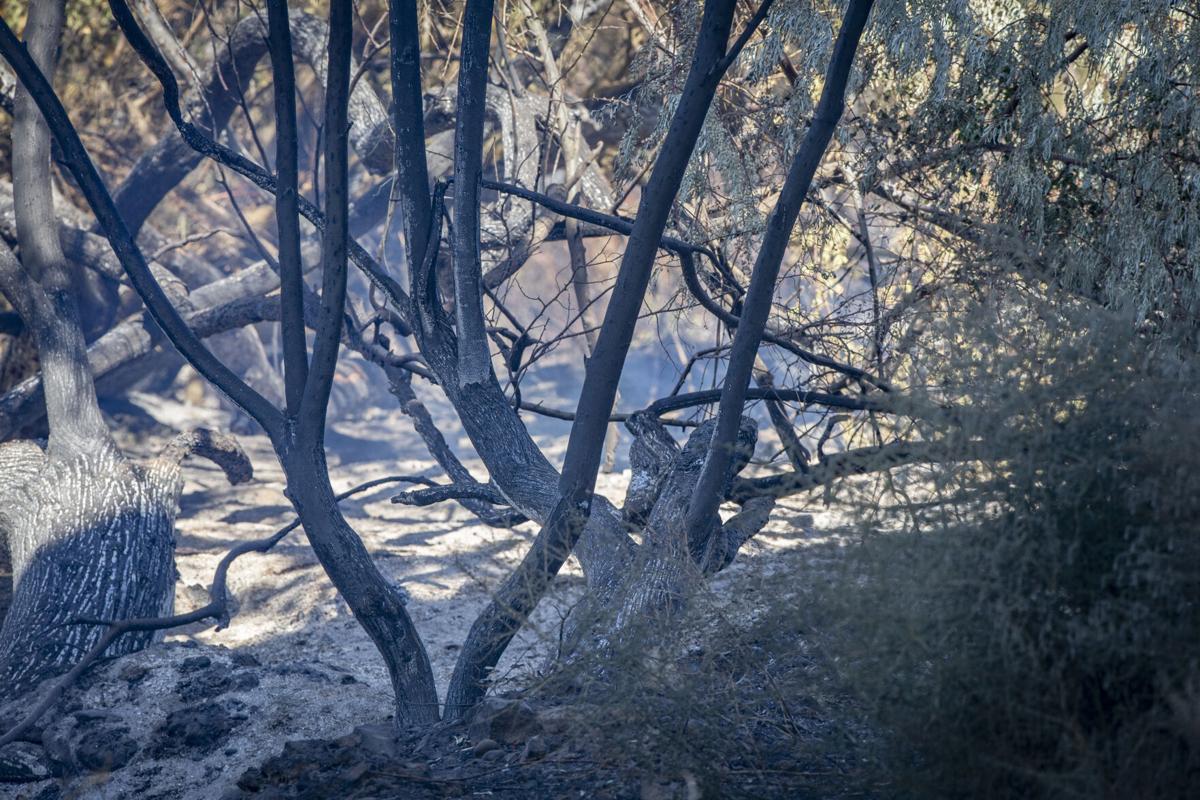 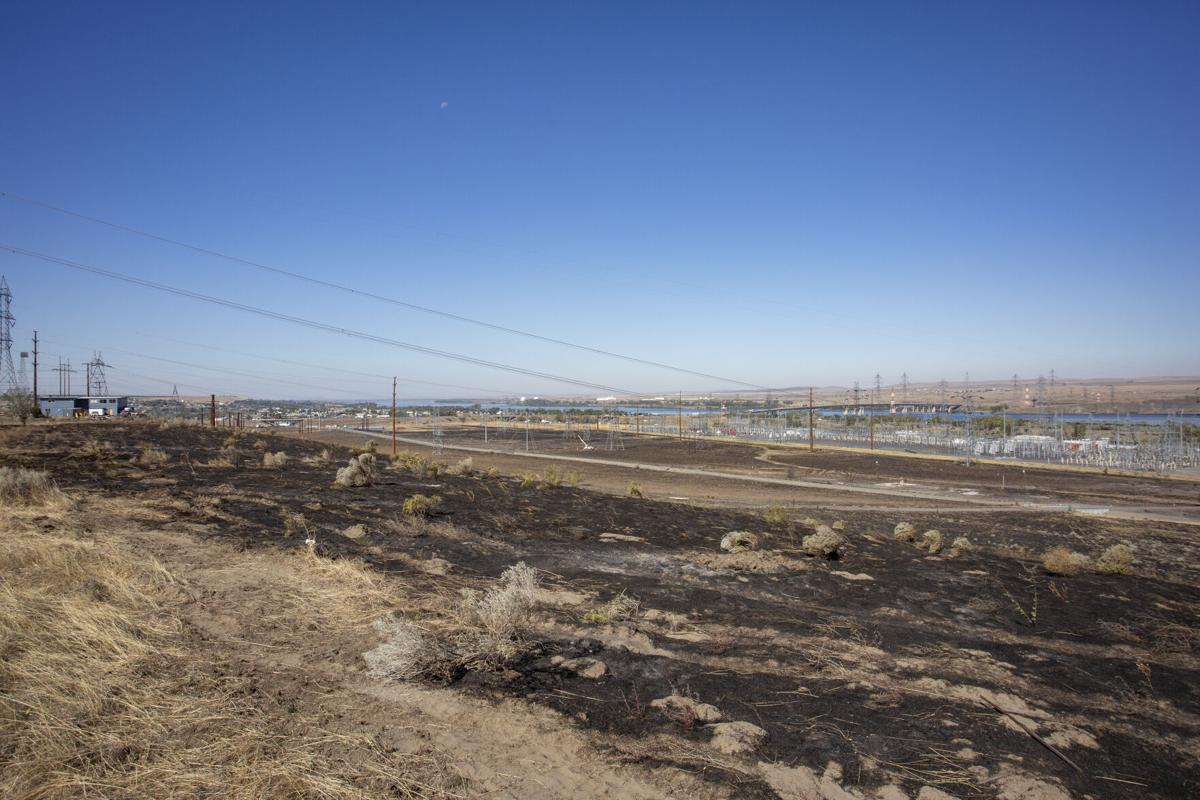 Scorched earth and a few hot spots remain on Tuesday, Sept. 8, 2020, after a fire ravaged grasslands near Umatilla on the evening of Monday, Sept. 7, 2020. 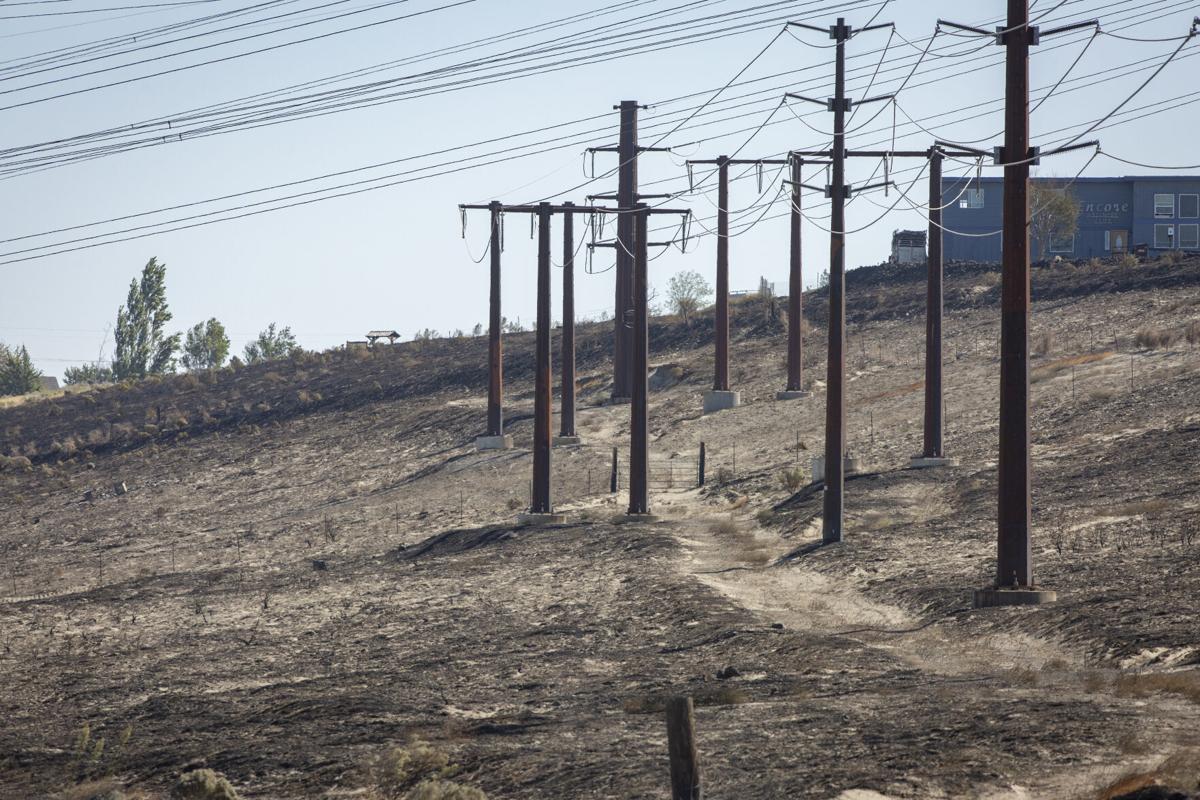 The bases of metal utility poles remain blackened on Tuesday, Sept. 8, 2020, after a grass fire ravaged fields near Umatilla on Monday, Sept. 7, 2020. 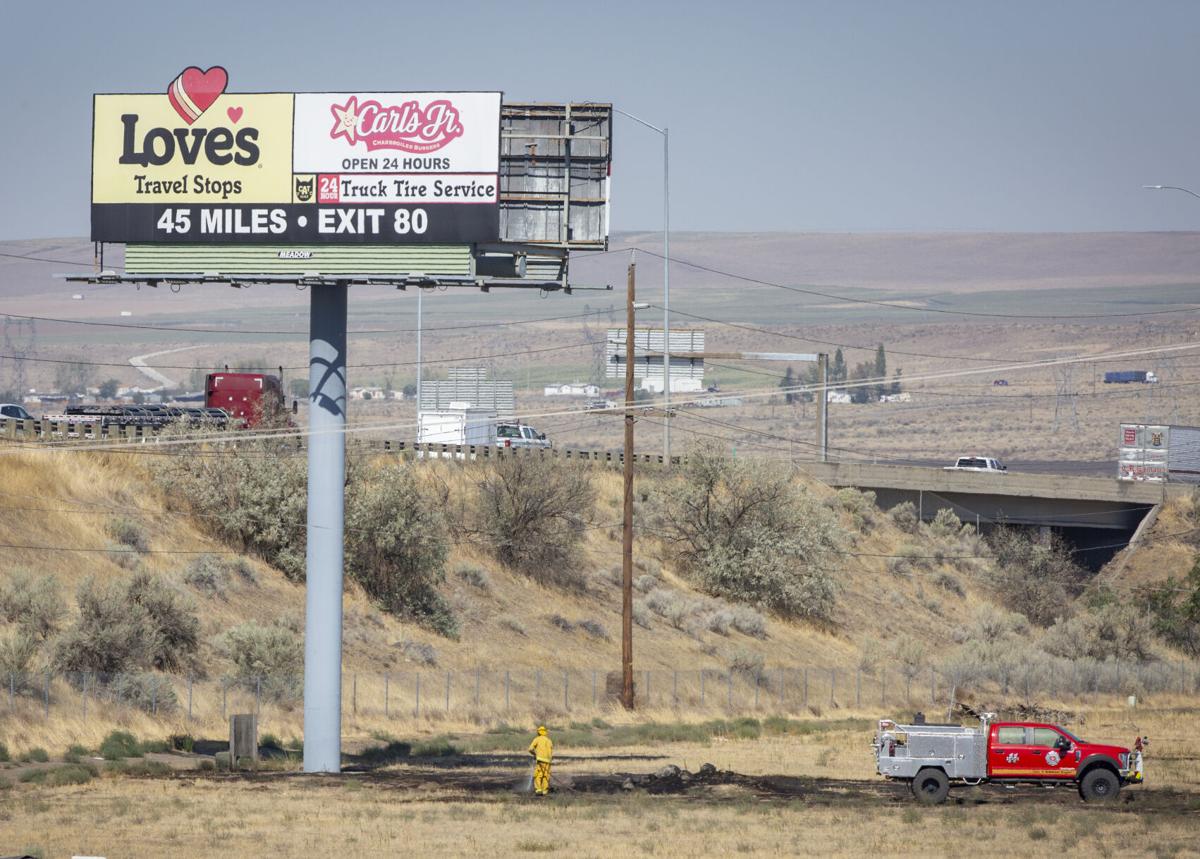 A firefighter works to mop up a hot spot adjacent to Interstate 84 on Tuesday, Sept. 8, 2020, after a grassfire ravaged the grasslands outside of Umatilla on Monday, Sept. 7, 2020. 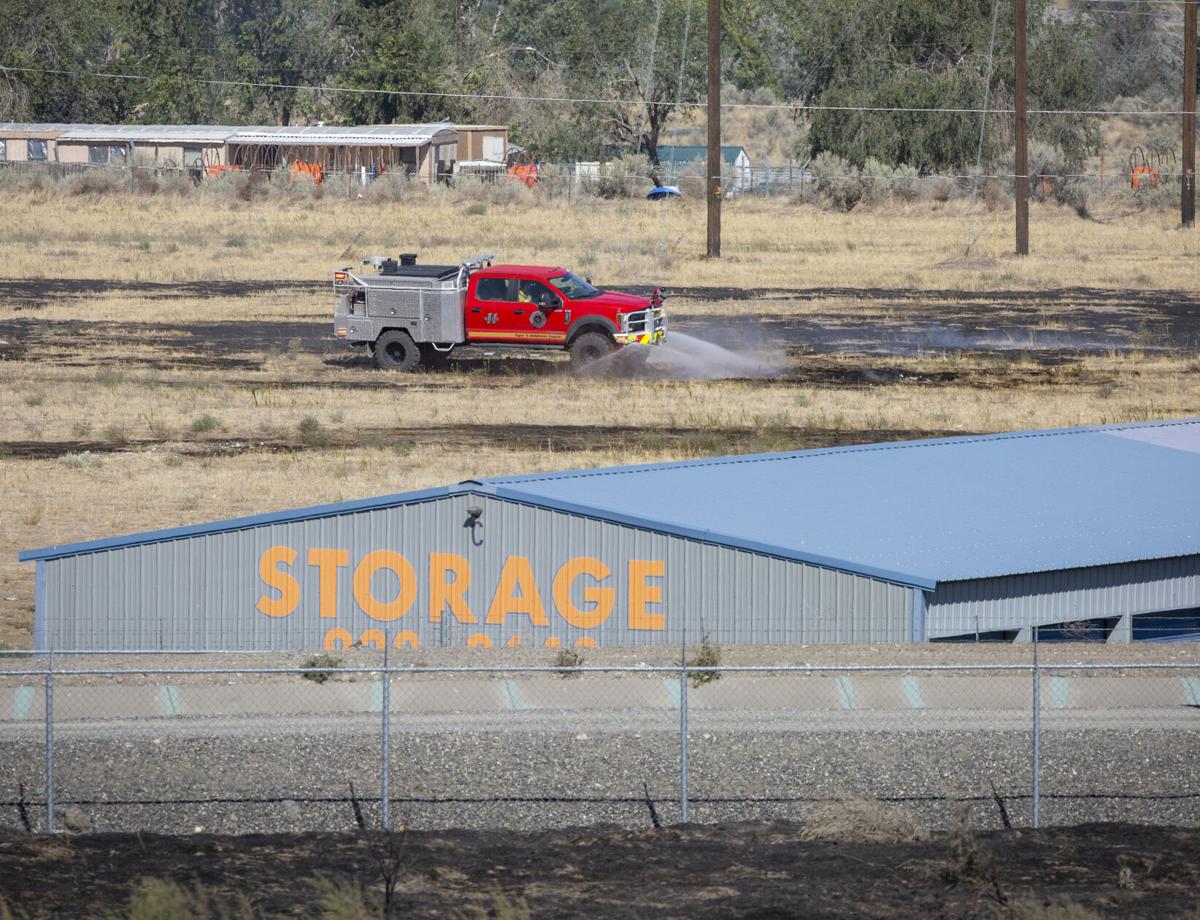 Line crews examine a utility pole on Tuesday, Sept. 8, 2020. The pole snapped off after heavy winds and a grass fire swept through the grasslands adjacent to Highway 730 east of Umatilla on Monday, Sept. 7, 2020.

A roadblock reroutes traffic at Exit 114 on Interstate 84 south of Kennewick, Wash., on Monday, Sept. 7, 2020. The interstate was closed for several hours due to heavy smoke and blowing wind as a result of fires near Umatilla.

A broken utility pole hangs by its wires after high winds and a grass fire swept through the area outside of Umatilla on Monday, Sept. 7, 2020.

Scorched earth and a few hot spots remain on Tuesday, Sept. 8, 2020, after a fire ravaged grasslands near Umatilla on the evening of Monday, Sept. 7, 2020.

The bases of metal utility poles remain blackened on Tuesday, Sept. 8, 2020, after a grass fire ravaged fields near Umatilla on Monday, Sept. 7, 2020.

A firefighter works to mop up a hot spot adjacent to Interstate 84 on Tuesday, Sept. 8, 2020, after a grassfire ravaged the grasslands outside of Umatilla on Monday, Sept. 7, 2020.

UMATILLA — A rapidly spreading grass fire in Umatilla threatened residential areas, forced evacuations and knocked out power for hours, but was contained before it could inflict significant damage on the evening of Monday, Sept. 7.

Steven Potts, the chief of the Umatilla Rural Fire Protection District, said the district got a call of a grass fire near the intersection of Highway 395 and U.S. Route 730 at 5 p.m.

Strong winds pushed the fire west, eventually leading the blaze to jump Interstate 82 and threaten homes in the area. Potts said several neighborhoods were evacuated as the fire spread, although he knew of no injuries and the only structure that was lost was a vacant house that had long been abandoned.

By 6 p.m., high winds and blowing smoke closed both lanes of Interstate 82 between Interstate 84 and Umatilla, along with sections of Highway 395 and Highway 730. According to the National Weather Service in Pendleton, 6 p.m. is also when wind gusts peaked in the area at about 51 mph.

Potts said fire crews began containing the fire around 8:30 p.m. and residents were soon allowed to return to their homes. He added that firefighters were still on-site Tuesday, Sept. 8 to address hot spots and flareups. Potts estimated the fire burned a total of 200 acres.

According to Potts, the gusty conditions across the region contributed to the fire’s initial burst of growth. At one point, Potts said, he was driving near the fire on Power City Road when he noticed the fire was doing something he hadn’t seen in his more than 30 years of firefighting experience.

“It was moving faster than I could drive,” he said.

A news release from the fire district on Sept. 9 stated the cause appeared to be power lines that had been knocked down by wind in the area of Highway 730 and Scaplehorn Road.

After over five hours of closures, the highways reopened around 11:15 p.m. and a spokesperson for the Oregon Department of Transportation confirmed no additional closures were in effect the morning of Sept. 8.

When Angie Smith returned to her home on the top of Powerline Road in Umatilla on Tuesday morning, she was afraid there would be nothing left.

On Monday night her sister had called to let her know that there was a fire near her. She looked outside and saw the orange glow of flames through the smoky haze outside.

"The flames came right up the hill, right up toward my house," she said. "It was horrible. A cop came to get me and I had about two minutes to leave."

As the officer urged her to hurry, she grabbed her cat, her dog, her safe with important papers and a handful of photos and fled to Umatilla High School, where the school was offering restrooms, water and internet access to evacuees.

Eventually she found a road between Umatilla and Hermiston that wasn't closed and headed toward her sister's house, where she spent the night. When she dropped by Walmart to pick up some kitty litter, she realized she had left her mask at home in her haste to evacuate.

"I forgot about the COVID thing when I was doing that," she said.

Smith said when she returned the next morning she could see scorch marks right up to the edge of the road opposite her house, and felt extremely grateful for the fire departments that protected the home she just had built and moved into in March.

No one ended up needing to sleep overnight at Umatilla High School after evacuation orders began lifting at 9:30 p.m., but Superintendent Heidi Sipe said there were about 10 people who hung out inside the school and more who stayed in the parking lot with their pets for a few hours that evening.

"They were at least able to connect to Wi-Fi and do what they needed to do during that period of waiting," she said.

Sipe was in Spokane Monday evening, preparing to head home, when her son called to tell her he had just called 9-1-1 about a fire near their home. In short order, the fire had jumped across the highway and begun to spread. She said she felt a little helpless trying to coordinate opening the school from afar, but she was grateful for staff, first responders and residents who jumped into action to fight the fire and take care of other logistics.

"We talk about how wonderful it is in a small town, how everyone comes together, and listening to the scanner I was seeing that," she said.

While the fire was under control on Tuesday morning, Sept. 8, the repercussions remained for many Umatilla students who still did not have internet access to start their second week of distance learning.

According to a Facebook post by Eastern Oregon Telecom, fiber in the McNary area was "destroyed" and some towers were not working, knocking out internet to downtown Umatilla, the South Hill CMTS, the Umatilla River Pole, Christy Tower and connections to Washington. The company stated it was working Tuesday morning to reroute service, install a wireless backhaul, set up generators and make repairs to restore service as quickly as possible.

Steve Meyers, spokesperson with Umatilla Electric Cooperative, stated in and email that approximately 2,500 customers were without power at the peak of the windstorm on Sept. 7, with most people impacted were those north and east of Hermiston, those along Highway 730 in Umatilla and those in the Meacham area.

Only about 140 people in scattered locations remained without power as of noon on Sept. 8, according to Meyers. Pacific Power indicated on its website that crews were assessing reports of at least 75 customers still without power in the Umatilla area as of 3 p.m.

In the meantime, Sipe said the district has been putting out social media messages and emails letting families know that while school would continue in order to provide a sense of routine for students able to log in, students who did not participate in classes while their internet was out would not be penalized for missing class or schoolwork.

While gusty conditions were abundant throughout Umatilla County on Sept. 7, a majority of the damage inflicted was restricted to the west side of the county.

“It was pretty much just trees across the roadways, especially on the west end of the county over by Hermiston,” Umatilla County Commissioner John Shafer said. “Things were hopping over there for sure.”

Shafer noted that Banister Road, which runs between the cities of Athena and Weston, was briefly blocked by a downed power line.

The East Umatilla Fire and Rescue also found itself battling a wind-assisted fire of its own at 5:34 p.m. near Juniper Canyon and Vansycle roads north of Helix.

Although the fire threatened some structures, fire crews were able to use a back burn to help stop the blaze’s progress. Firefighters started mop-up duty of the 1- to 2-acre fire by 7:56 p.m. There were no reported injuries and the cause of the fire is still under investigation.

A few new fires were also recently reported in the Umatilla National Forest but have quickly been contained.

Weseman said a fire believed to be started by lightning a few weeks ago was contained Sept. 7 at about one-tenth of an acre about 24 miles southeast of Milton-Freewater in the North Fork Umatilla Wilderness, while a human-caused fire was contained at 7 acres by Lehman Hot Springs to the east of Ukiah.

A fire with an unknown cause and estimated at about one-quarter of an acre was reported about 15 miles west of Ukiah on Sept. 8, Weseman said, and resources have been deployed to the scene.

The Sept. 7 storm and wildfires were just the latest in a year already marred by historic flooding throughout the county in February, the onset of the COVID-19 pandemic in March, along with flooding in Pilot Rock brought on by record-level rainfall, and another windstorm on the west side of the county that both occurred in May.

The May windstorm, however, temporarily left more than 9,000 residents without power at the time as wind gusts reached up to 70 mph.

“Of course we’ve been through this before but this one wasn’t as bad as the others,” Shafer said. “Hopefully some people had new shingles down and they stayed down.”

Red Flag Warnings for extreme fire conditions have been lifted for the Columbia Basin and lower Blue Mountains. But the National Weather Service in Pendleton has forecasted conditions to remain hot and dry throughout the week and fire dangers remain high according to the Blue Mountain Interagency Dispatch Center.

Editor's note: This article was updated to include new information about the cause of the fire.