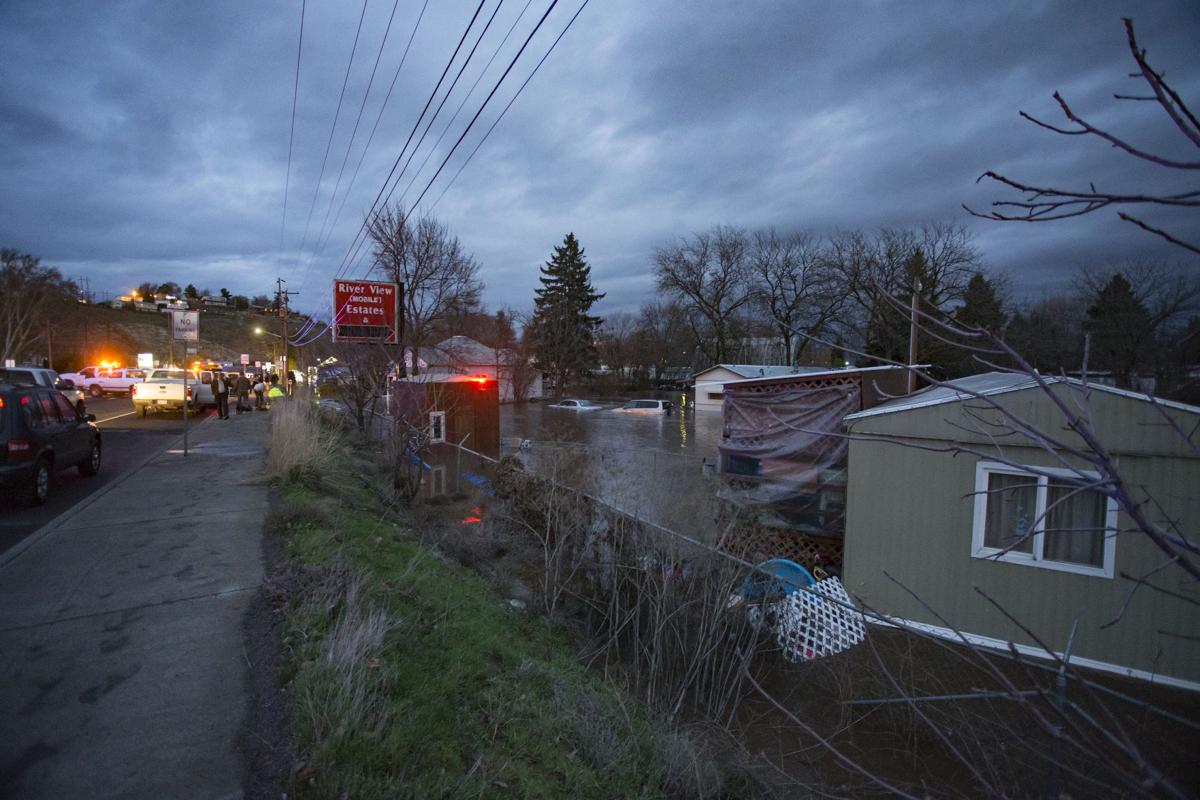 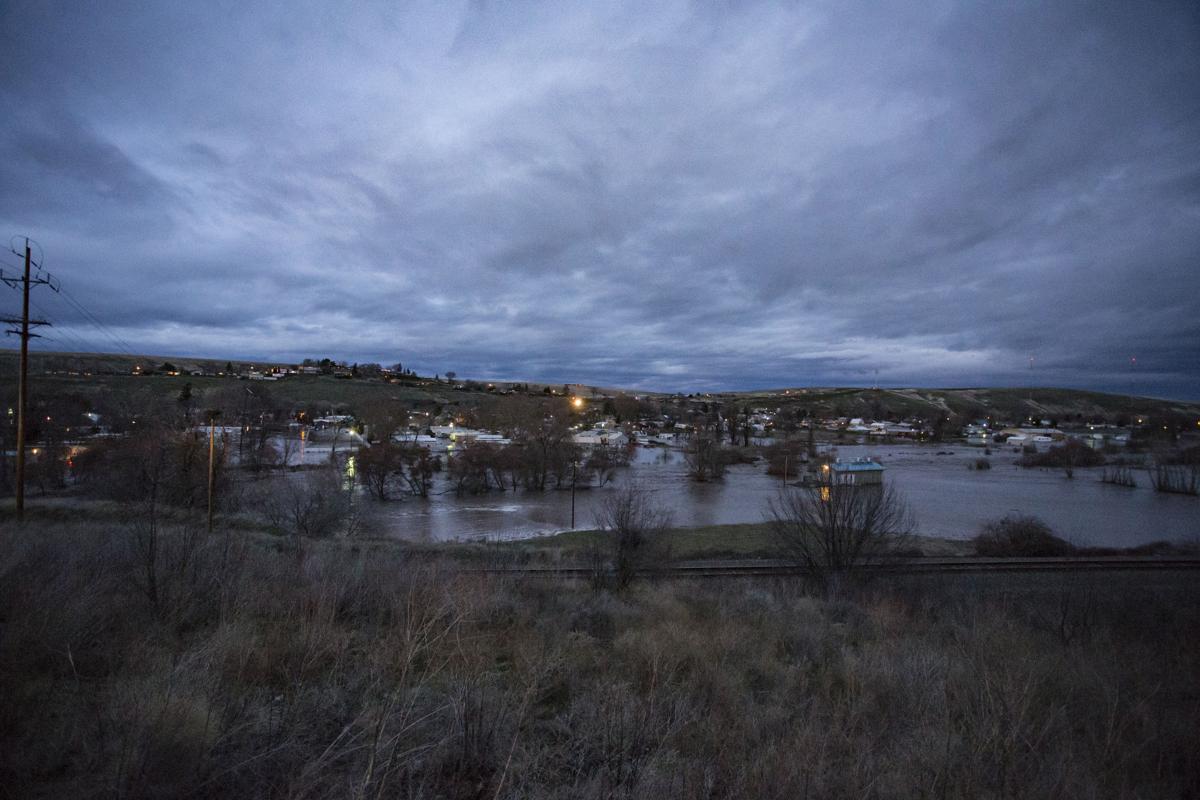 Water from the Umatilla River inundates the lower elevations in eastern Pendleton, forcing the evacuation of residents on Feb. 6, 2020. 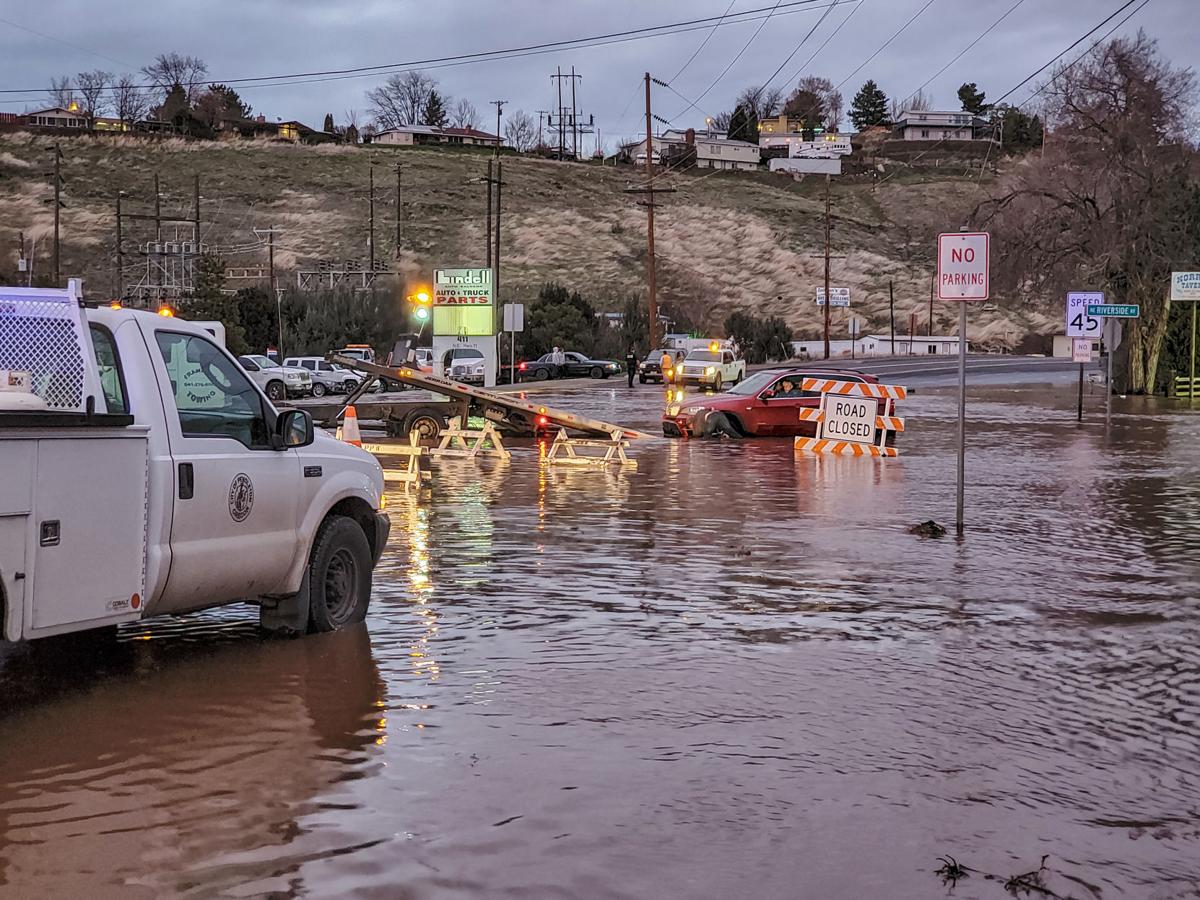 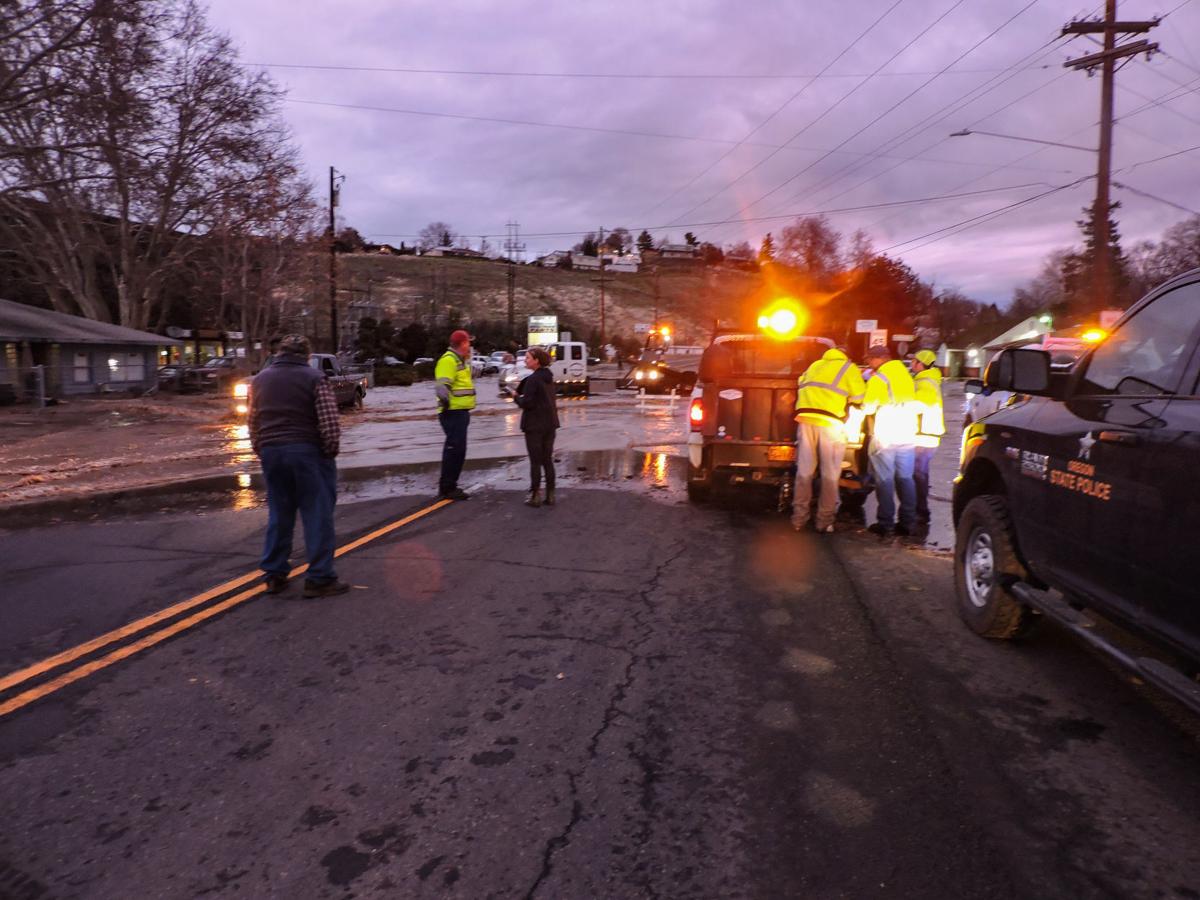 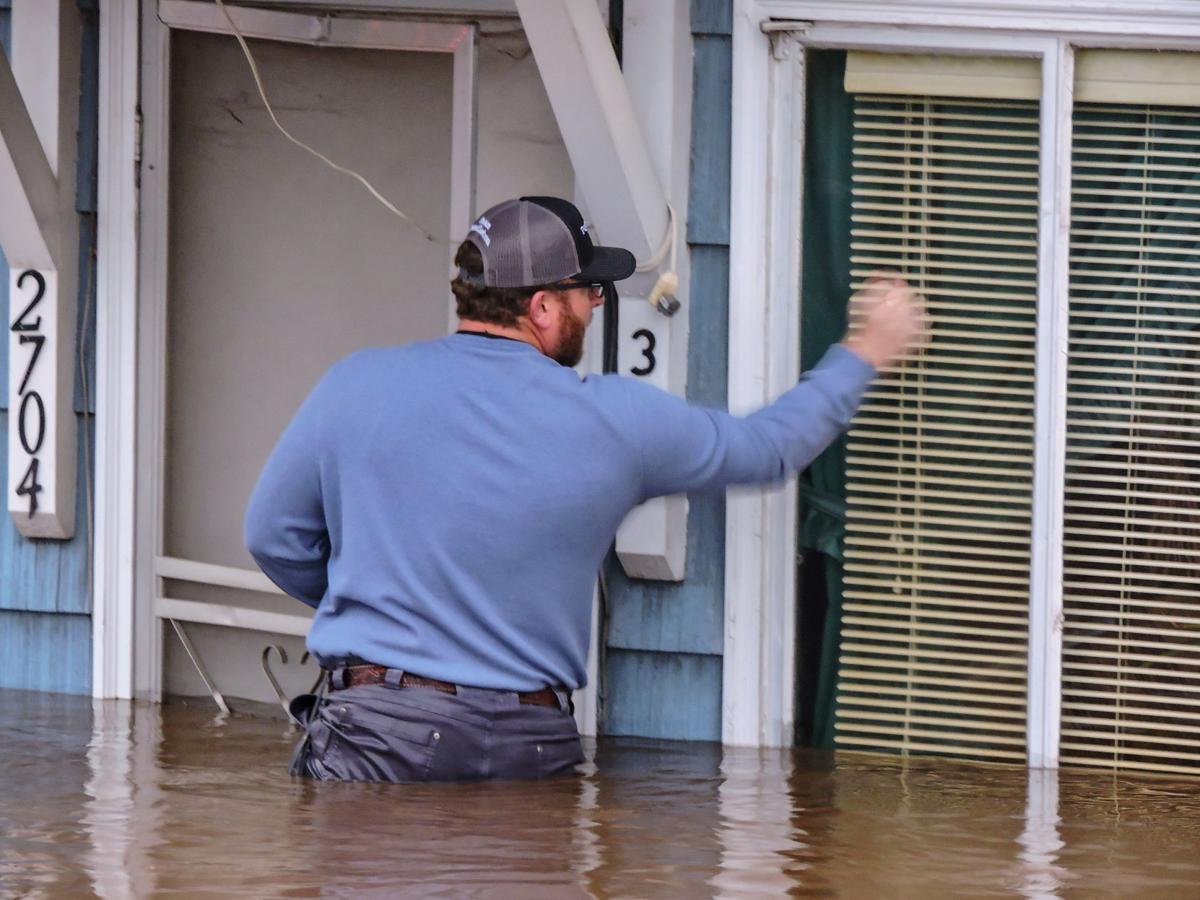 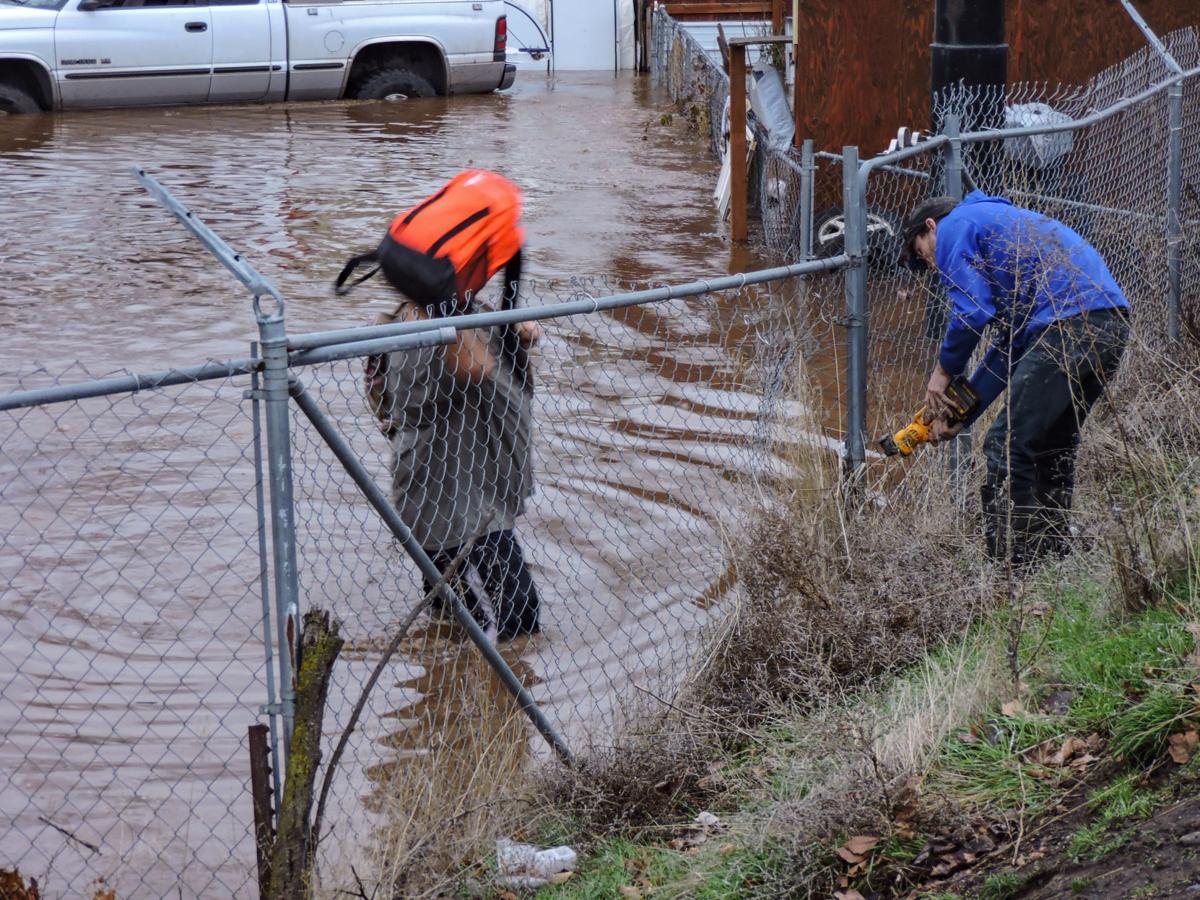 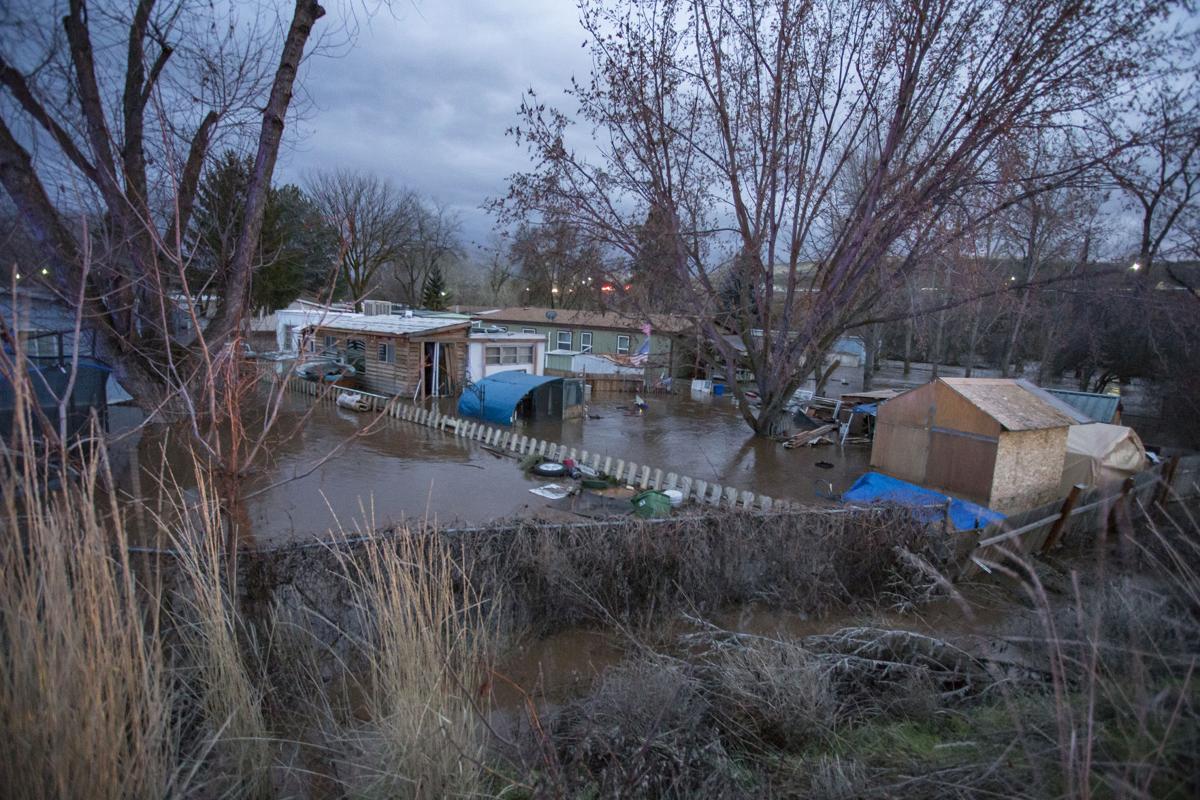 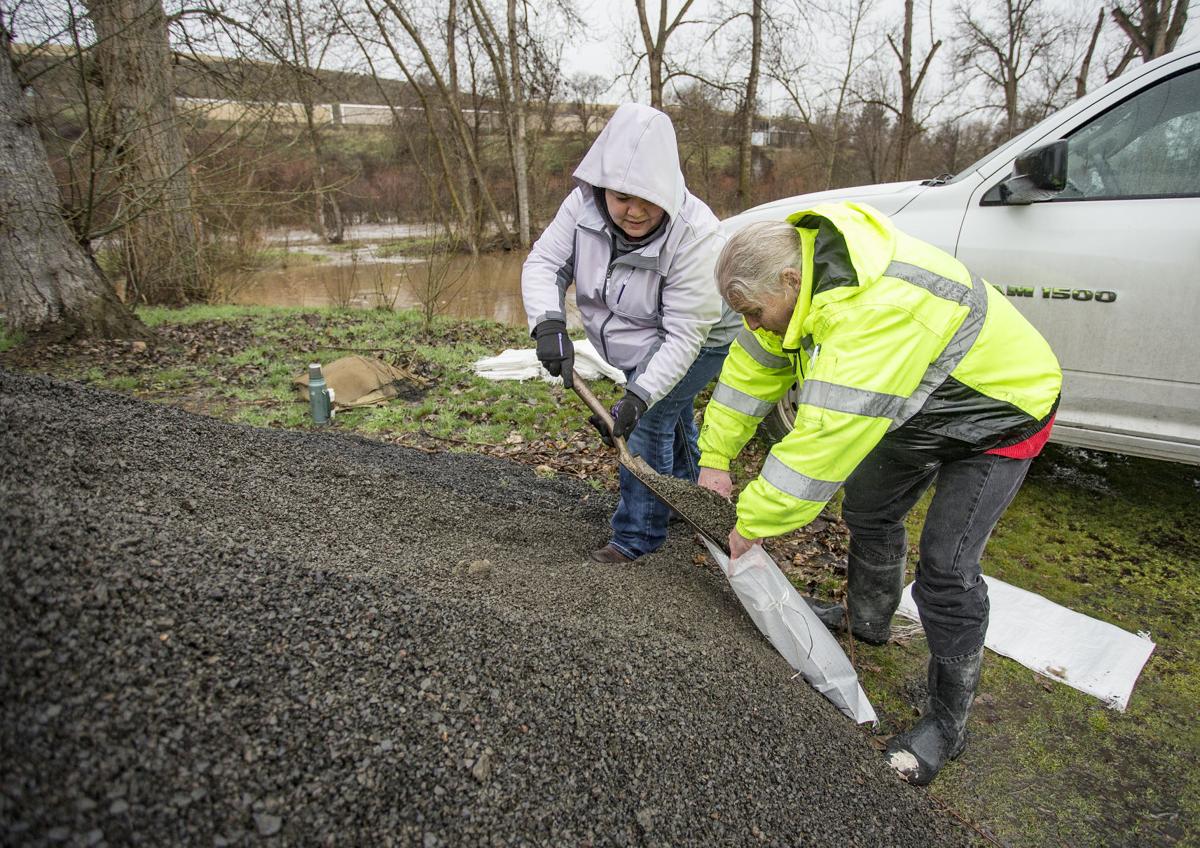 Robin Hauck, a property manager at Riverview Mobile Home Estates, shovels gravel into bags as Cheryl Baker holds open the bags at the property in eastern Pendleton on Thursday, Feb. 6, 2020. 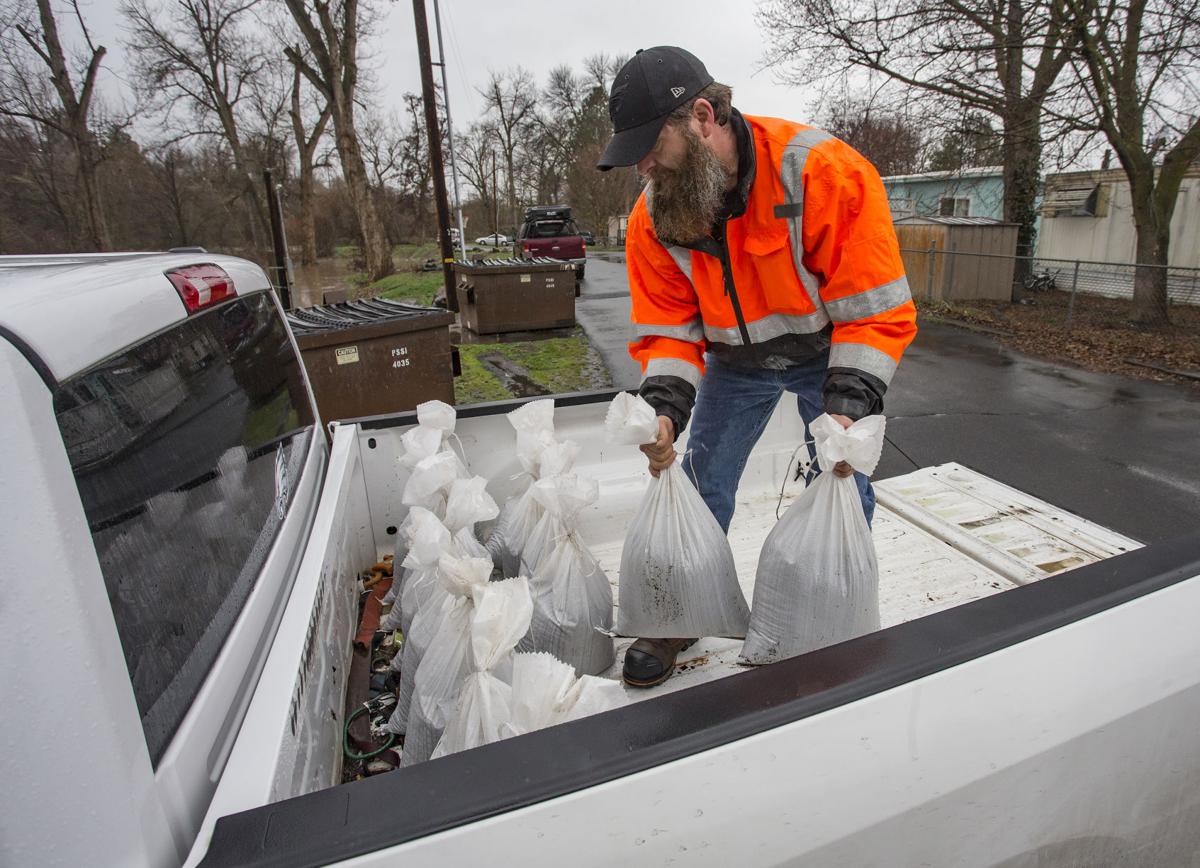 Harley Hauck, a property manager at Riverview Mobile Home Estates, loads sandbags into a truck at the mobile home park on Thursday afternoon in Pendleton. Hauck and residents of the park are preparing for flooding from the Umatilla River, which runs adjacent to the park. 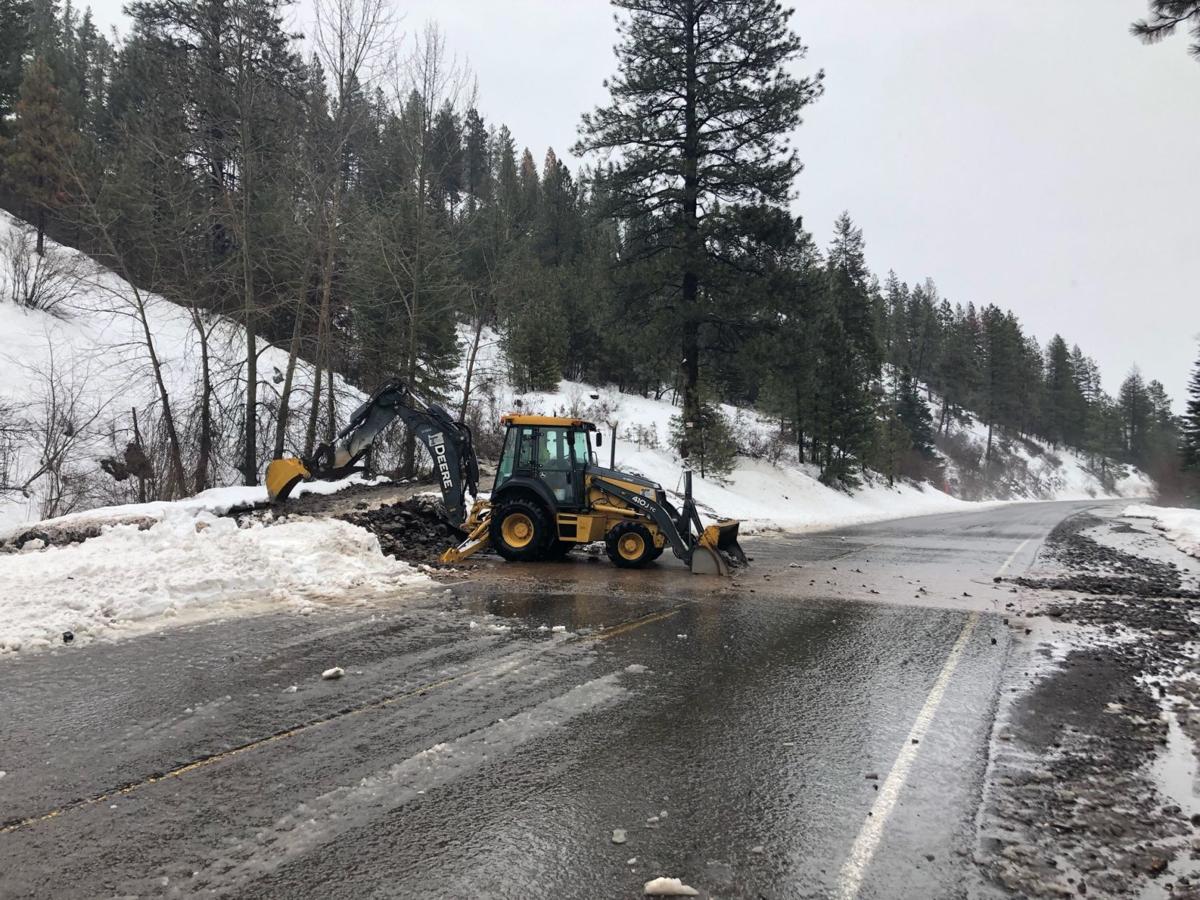 A front-end loader works to remove debris from Highway 204 near Elgin on Thursday.

Water from the Umatilla River inundates the lower elevations in eastern Pendleton, forcing the evacuation of residents on Feb. 6, 2020.

Robin Hauck, a property manager at Riverview Mobile Home Estates, shovels gravel into bags as Cheryl Baker holds open the bags at the property in eastern Pendleton on Thursday, Feb. 6, 2020.

Harley Hauck, a property manager at Riverview Mobile Home Estates, loads sandbags into a truck at the mobile home park on Thursday afternoon in Pendleton. Hauck and residents of the park are preparing for flooding from the Umatilla River, which runs adjacent to the park.

A front-end loader works to remove debris from Highway 204 near Elgin on Thursday.

PENDLETON — Early forecasts Thursday morning initially said flooding in east Pendleton was possible. By late afternoon, it was a reality.

The Umatilla River spilled from its banks onto Northeast Riverside Avenue and forced residents of the Riverview Mobile Home Estates and surrounding area to flee from their homes.

Police said an official evacuation was underway shortly after 5 p.m.

Some residents returned to the Riverview Mobile Home Estates on Thursday to find their homes under water.

“We’d just gotten home,” said Tony Montoya, who lives in the mobile home park. “There was water filling my backyard.”

Montoya and his family have lived at Riverview for five years. The family waded out of their home with belongings they could carry on Thursday night, including a beloved dog.

Montoya said they’d never seen anything like this, and hadn’t gotten an evacuation notice.

“We were going to wait it out, but this happened so fast. Everybody is worried,” he said.

Delores Hendricks, who rents three of her mobile homes out at Riverview, couldn’t locate one of her tenants. She said his phone line was busy, as water overtook the windows of his blue trailer and inched up towards the roof of his car parked outside.

Emergency personnel knocked on the man’s door, and when no one answered Hendricks said he may have gone to stay with someone on higher ground.

At that time, Roberts said he was unaware of any injuries caused by the flooding.

“The reality is, you need to stay away from the Riverview area. Don’t even attempt to come down,” he said.

The Pendleton Convention Center opened its doors as an emergency shelter Thursday night, as the Umatilla River rose from moderate to major flood stage on the east side of the city and on the Umatilla Indian Reservation.

Before it opened, Convention Center Manager Pat Beard said the shelter was anticipating 75 to 100 guests from across the county. Members of the Red Cross in Bend were en route to Pendleton before the shelter opened at 7:30 p.m.

“We’ll be open for intake all night,” Beard said.

The Confederated Tribes of the Umatilla Indian Reservation stated in a news release Thursday night that the Cmuytpama Warming Station was open for evacuees as well.

“Family of those affected who are currently awaiting arrival of residents being transported by emergency personnel are advised to wait at the Mission Gym on July Grounds Lane,” the release said.

The city of Pendleton advised the public to stay off of the river levee due to heavy debris. By 8 p.m., water was pouring into the parking lot at the East Oregonian office on Southeast Byers Avenue.

Pendleton City Manager Robb Corbett said that based on eastward stream gauges, the water should be lower Friday morning.

“It’s important for people to know that there’s no threat of flooding at McKay Creek. The reservoir is at lower than average levels,” he said.

More rural areas of the county saw their share of rising waters Thursday.

“There’s a considerable amount of snow melt going on,” said Umatilla County Sheriff Terry Rowan. “We’ve been on it since very early this morning, and we know the threat will continue for at least 24 hours.”

He added that Milton-Freewater and Adams had both been hit hard with rushing waters Thursday.

Gibbon, an unincorporated community on the reservation, was hit with record flooding, according to the weather service.

In Adams, Thorn Hollow Road was closed, and in Milton-Freewater, parts of Walla Walla River Road were also closed. According to the sheriff’s office, a state of emergency was declared in Weston on Thursday afternoon due to the flooding.

He said the county relies on National Weather Service data to get prepared.

“Sometimes it’s advance warning, sometimes it’s as quick as they get,” he said. “Both myself and the tribes are working towards solutions. (We’re) trying to ensure the public knows we’re getting as many resources as we can. Please don’t put yourself in harm’s way, don’t cross moving water,” he said.

Roberts added that the effects of flooding were anticipated to calm in the next 24 hours.

“These are not going to be like the floods last year,” he said, “It will start to end (Thursday) evening or Friday.”

He urged people who may be isolated due to floodwaters on the roads to seek higher ground.

Tim McMahan, a spokesperson for Union Pacific Railroad, said a mudslide 26 miles east of Pendleton rendered a portion of the railroad tracks unusable. Thursday afternoon, he said the company did not know when the slide would be cleaned up.

The weather service confirmed Thursday night that flood warnings were effective in Pendleton, Gibbon, and near the Touchet River outside Milton-Freewater.

Thursday evening, the Oregon Department of Transportation announced Highway 204, the Tollgate Highway, would be closed until 7 a.m. Friday morning due to two landslides that plugged streams and culverts adjacent to the Grande Ronde River.

“If conditions allow,” stated the department in a news release “we will escort local residents and emergency vehicles only through the high water areas.”

The release added that drivers should only travel through water unless they’re certain of the depth, and that high waters can misplace pavement entirely.

“We knew there would be flooding issues,” said Oregon Department of Transportation spokesperson Tom Strandberg on Thursday afternoon.

A similar flooding event was being addressed on state Highway 244, the Ukiah-Hilgard Highway, just west of Hilgard State Park and the junction with Interstate 84 in Union County. Thursday night, the department’s traffic update website, Tripcheck, showed delays between 20 minutes and two hours due to floodwaters.

“Tis the season to be watching out for this stuff. Be vigilant, be prepared. Don’t be driving where there’s water in the roadway,’’ he said.

He added that drivers can check Tripcheck for current updates to roadways, and to expect delays on both roadways.