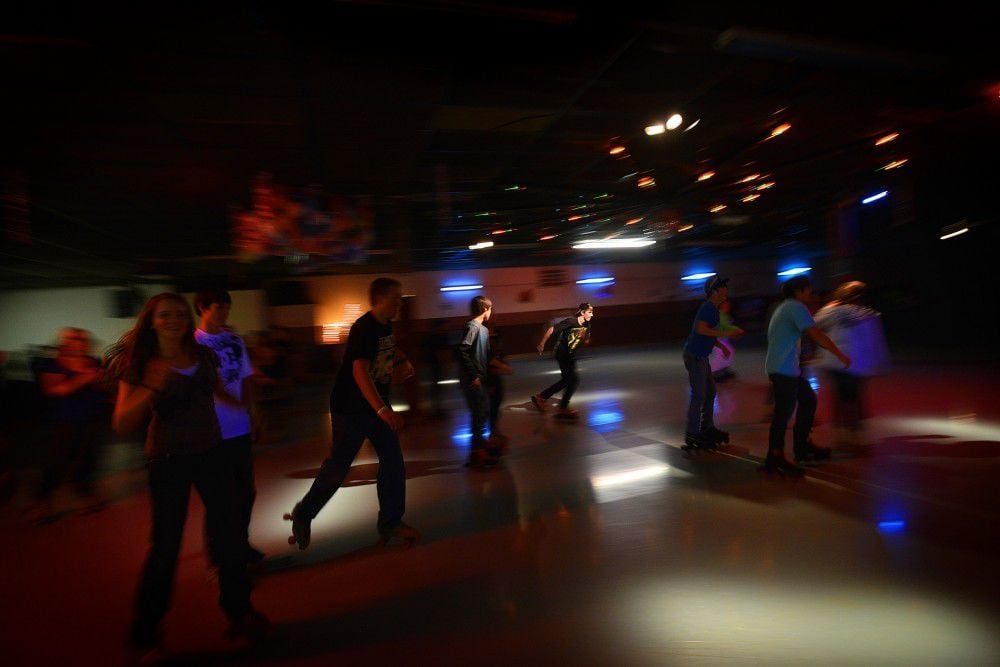 <p>Skaters races along to music during an all-night New Years Eve skate party on Monday at the Pendleton Skate City roller rink.</p> 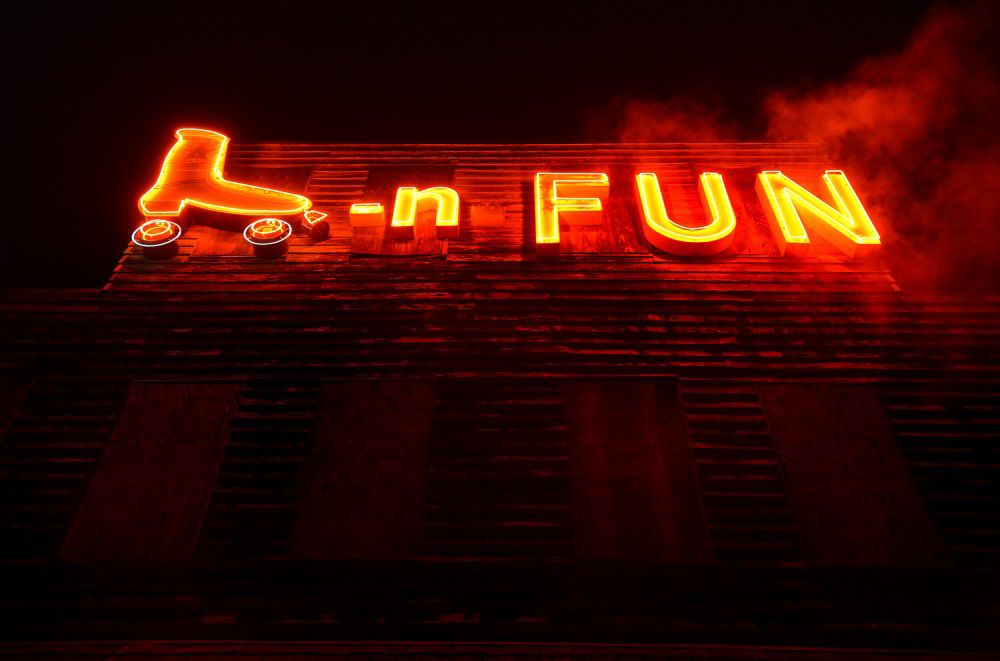 <p>Light from a neon skate-n-fun sign catches on steam rising up from the Pendleton Skate City roller rink on Monday.</p> 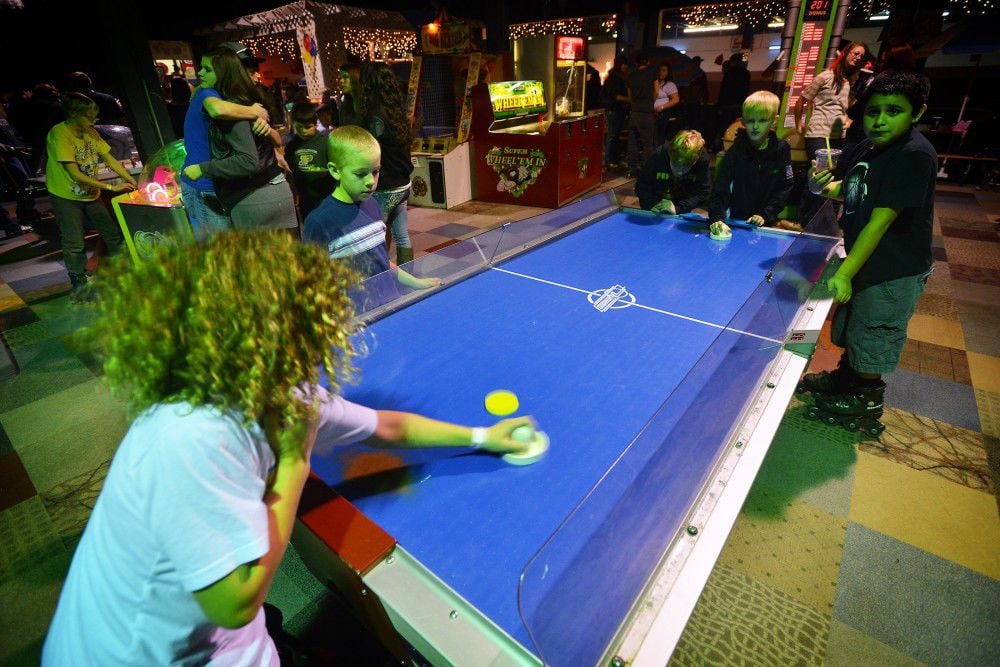 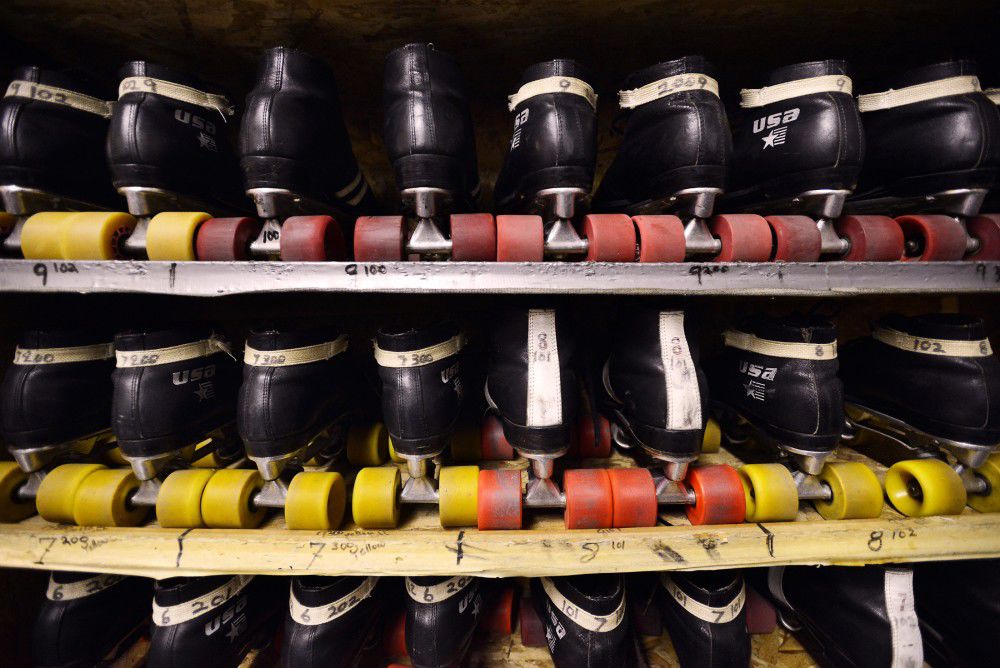 <p>Most of the traditional roller skates at the Pendleton Skate City roller rink are from the 1970s. The roller rink does offer newer, in-line skates as well.</p> 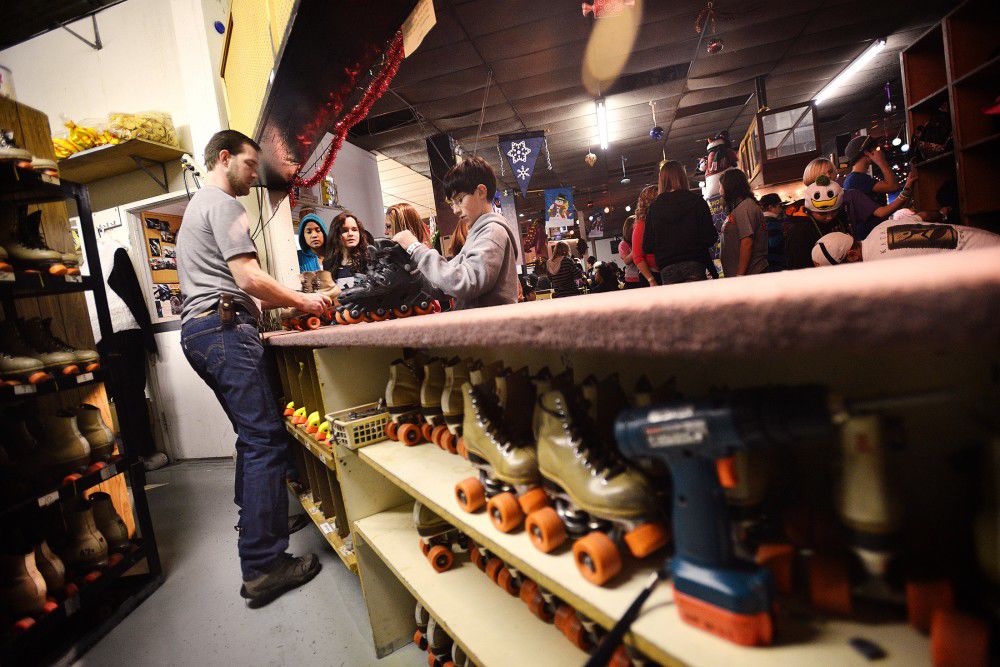 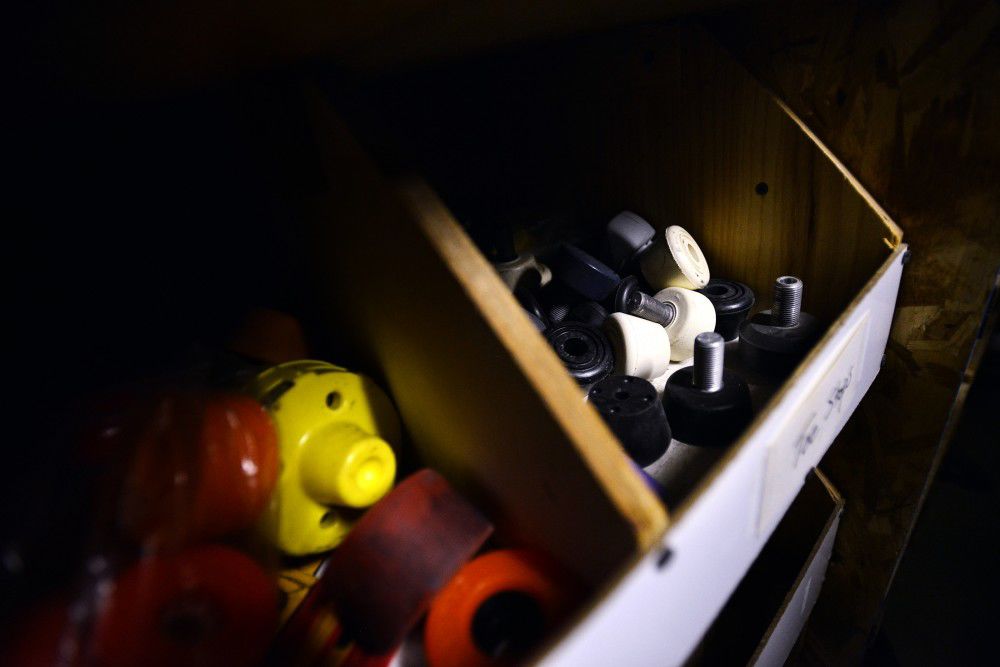 <p>Replacement toe stops for roller skates sit in a bin in the repair shop at Pendleton Skate City roller rink.</p> 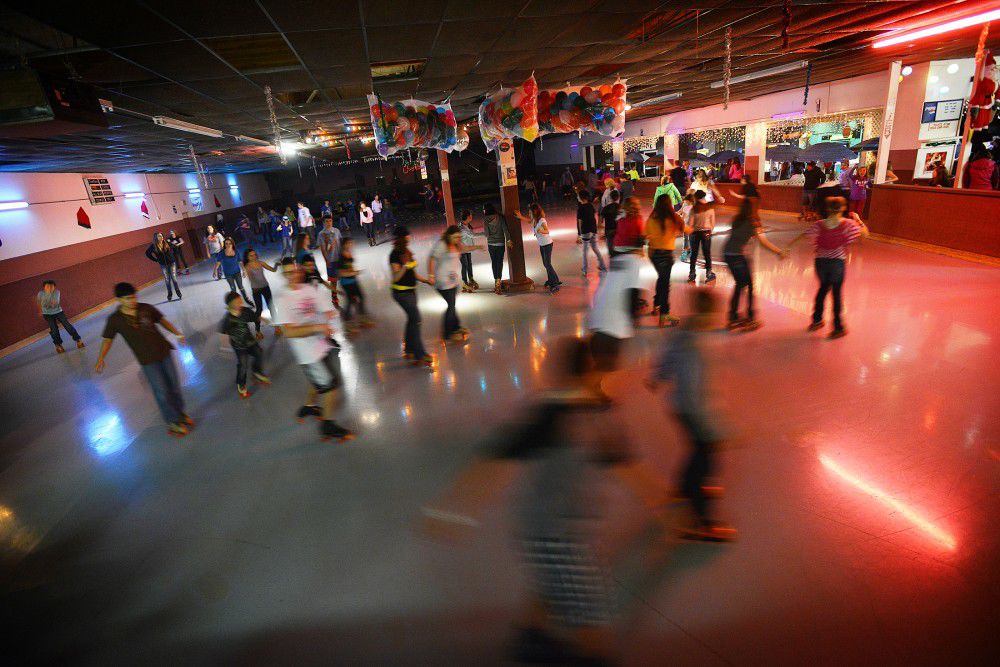 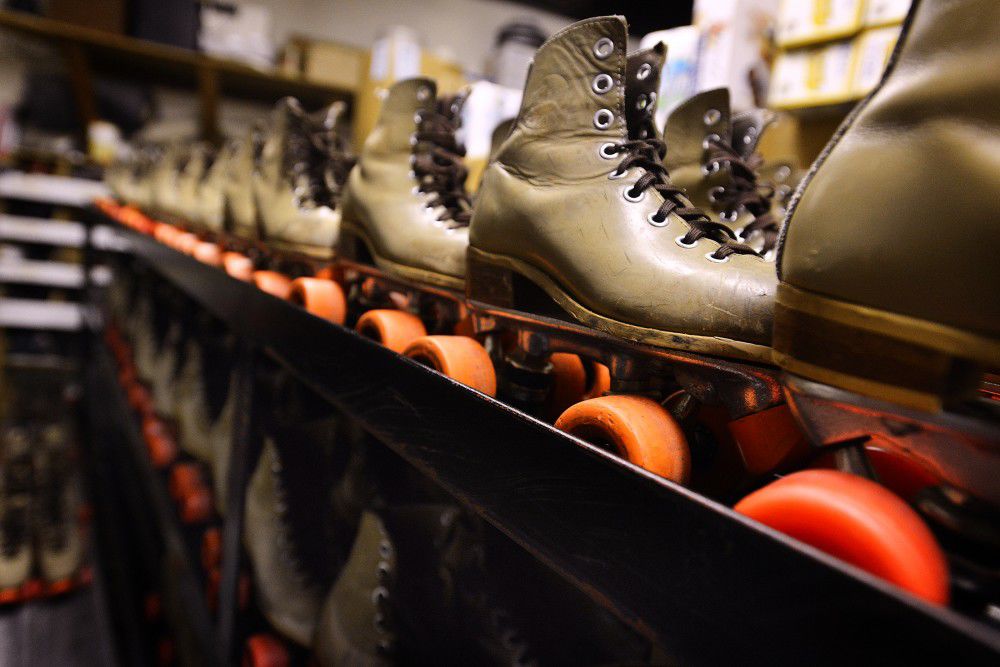 <p>The rink has more than 550 pairs of roller skates and in-line skates.</p> 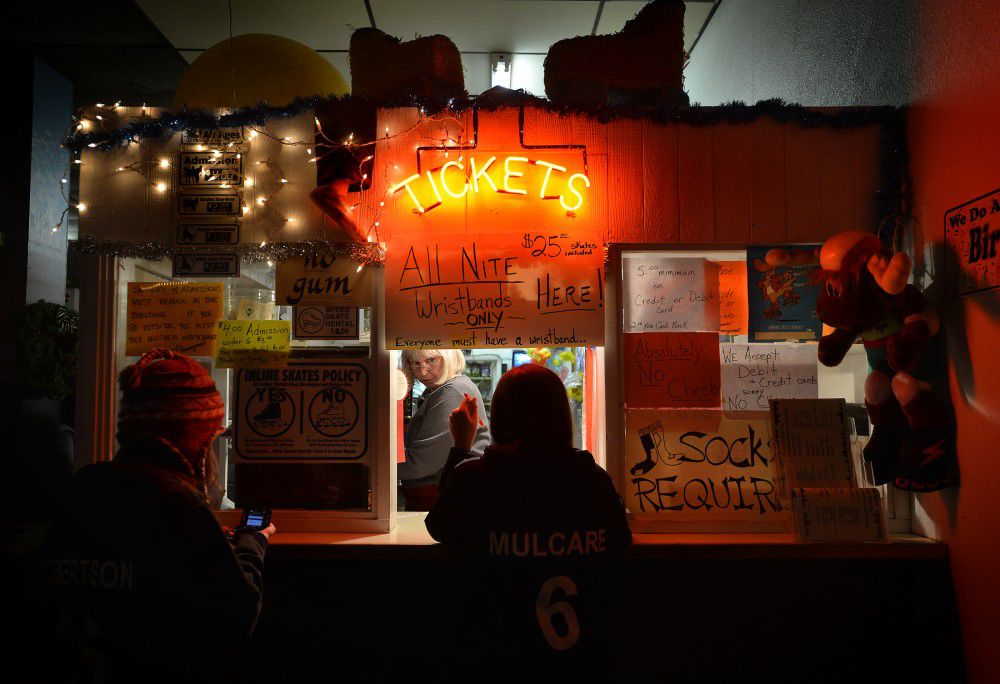 <p>Skaters races along to music during an all-night New Years Eve skate party on Monday at the Pendleton Skate City roller rink.</p>

<p>Light from a neon skate-n-fun sign catches on steam rising up from the Pendleton Skate City roller rink on Monday.</p>

<p>Most of the traditional roller skates at the Pendleton Skate City roller rink are from the 1970s. The roller rink does offer newer, in-line skates as well.</p>

<p>Replacement toe stops for roller skates sit in a bin in the repair shop at Pendleton Skate City roller rink.</p>

<p>The rink has more than 550 pairs of roller skates and in-line skates.</p>

It was originally built as a pea cannery and it looks like it still might be one.

The only clue that something else is happening in the paint-peeled building with a towing and recovery company out front is a red neon sign in the shape of a roller skate followed by the words -n FUN.

Under that buzzing sign, generations of Pendleton skaters have celebrated birthdays, held hands for the first time and danced the night away at the Pendleton Skate City roller rink.

And yes, its still open. And it still features bright orange and yellow tables, disco lights, the Hungry Gator arcade game: an interactive time capsule on the outskirts of town.

The rink was installed in the middle of the 1970s, the heyday of roller skating for American adults. For the first two years, owner Sandy Lindell said the place was so crowded you couldnt fall down if you wanted to.

But fads come and go. Local profits werent reinvested in the building, the sport fell out of favor and the Pendleton rink fell into disrepair. The Lindells brought in another manager to run the place after the first ones left in the 1980s, but that didnt go so well either. Things got worse.

Mice were eating mice in here, she said.

In 1989, after the rink had been closed for about a year, Sandy decided she wanted to give it another try. Her husband?Joe, who owned the building and the Blue Mountain Towing Company located within the same old pea cannery, said he had seen the skating business go bust twice already and wouldnt invest another dime in the place.

So I?took the change out of my purse, brought candy from my home and that was business, Sandy said.

She brought in Lorraine White to manage the place. They mopped and cleaned, made their own prizes and heated nacho cheese in fondue pots they brought from home.

One of their best customers at that time was Nathan Kennedy, who now co-manages the place with White.

Kennedy, 38, calls White mom, not because they are blood relatives, but because its the quickest way to get her attention.

The two run the place in their spare time, for two hours a day from Friday through Sunday. Weekends are filled with birthday parties; some Saturdays as many as five will be going at once.

White and Kennedy play it up to help the birthday child feel like the center of attention. Sirens wail as the cake comes out, covered in candles, and the Happy Birthday Song?blares out over the the rinks speakers as the skaters make their rounds.

Kennedy said many children enjoy the place while they are young.

Their eyes just light up when they come in here, said White.

A couple years later, however, many feel they are too cool to have anyone see them enjoying themselves.?But often around junior year in high school they begin to remember how much fun they had when they were younger and start to return. The rink is busy when there is a high school dance in town, and on prom night some skate in tuxedos and gowns.

A place for romance, or at least a good workout

Roller skating is affordable, said White. That gives them a leg up on other recreation options, especially when families cut back on nonessentials. Admission is $4, with an extra $1 or $2 if you need to rent skates. Those prices havent changed in decades, said White.

It is a nostalgic and even romantic hobby, according to Kennedy. He met his wife at the rink and he knows of other couples who have done the same. They have performed weddings on site.

They entertain with music, new and old, a dice game that is sort of like musical chairs on roller skates and, depending on the age group, will open the floor to races or skating couples. The arcade is filled with ticket games?that children can redeem for prizes. They also have a rock climbing wall and a laser tag area that is not in operation because of electrical problems too expensive to fix. Their teen?New Years Eve Party is their busiest day of the year, attracting hundreds of youngsters, some of whom party and eat pancakes until 6 a.m. the next day.

Parties and special events make up much of their business, but there are regular visitors, too.?The womens roller derby team from Walla Walla sometimes comes down to skate and there are repeat customers who cant get enough of the meditation and exercise the oval provides.

Diana Davrainville, 62, is one of them. She has been making the nearly two-hour drive from her home in Summerville to the Pendleton rink each Sunday for the last 22 years.

Its as close to heaven as Ill ever get, she said. My problems roll right onto that floor.

She raised her daughter at the rink in La Grande, but it closed in the mid-1990s, kicking off a difficult time in Davrainvilles life.

Her husband heard about the rink in Pendleton and Davrainville said she was out the door before he finished telling her where it was.

When she arrived at Pendleton Skate City, Davrainville said she gave everybody a hug, kissed the floor and told them I?was going to come as often as I?can.

And she has. If gas were cheaper, she said shed make the trip twice a week if not more.

The rink managers do, too. Winters are their busiest time of year, but now they must compete with the taxpayer-funded outdoor skating rink at Roy Raley Park. And, of course, the ever-changing tastes?of American teenagers. For one generation, the rink may be the hangout. The next wont be caught dead there.

Yet for nearly 40 years, the business has survived. And very few Pendleton residents dont have a memory, however distant, of roller skates.