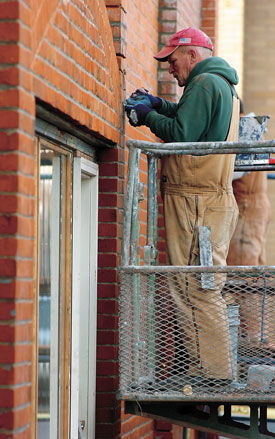 Pat Kemp works on replacing the mortar Wednesday on the brick facade of Pendleton Quiltworks in downtown Pendleton. <i>Staff photo by Nicole Barker</i> 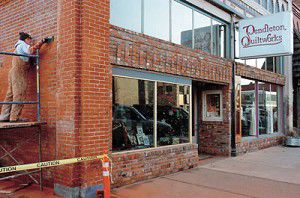 Pat Kemp works on replacing the mortar Wednesday on the brick facade of Pendleton Quiltworks in downtown Pendleton. <i>Staff photo by Nicole Barker</i>

With daylight fleeting and the temperature dropping, a small dedicated group of citizens and city officials Wednesday toured downtown Pendleton to take a firsthand look at just what the city's Facade Restoration Grant Program has wrought.

The group stopped at more than a dozen properties or businesses, from the Brown Building, 106-114 S.W. Court Ave. to Collins & Collins, 326 S.E. Second St., and periodically scrambled inside buildings and spoke with owners about the work they've done to enhance their property. Chase provided much of the information about what improvements owners have made to buildings while May provided much of the historic background. May's often considered a walking encyclopedia when it comes to the history of Pendleton buildings and wrote most of the information that appears on the new plaques adorning historic buildings in the Urban Renewal District.

May points out various details, some not easily apparent to untrained eyes. For instance, how one building owner used vinyl windows but framed them in wood to give a better look. Also which buildings have signs from the Cold War designating them as nuclear bomb shelters, that Hamley's isn't finished with its second floor front facing Main Street. And that what we know as the Temple Hotel was originally the St. George Hotel - which owner Al Plute plans to call it again - but for a while it was the Hotel Dorion before there was a Dorion Avenue in town.

Just how well the facade restoration program has worked perhaps became most apparent when looking at the exteriors of the downtown branches of Community Bank and U.S. Bank. Their drab, blocky buildings stick out from the surrounding impressive brick work and new awnings.

Some building owners lately have been busy using their facade restoration funds. David Doherty, whose wife, Rachelle, owns Pendleton Quiltworks at 138 S.E. Court Ave., has been working to restore the building's brick work, giving it a fresh, lively look.

Again, it's the details that matter. He points out small, arrowhead-shaped brick creations that dot the bottom of the building.

May and crew were obviously pleased with the work that's been going on. They agreed that in as little as five years Pendleton will be a very different place and these efforts will be a big reason for that.

"My model has always been Baker City," May said. "Given enough time we can get every facade done."

Severe and others in the group said Pendleton is undervalued and that will change.

"It's just a matter of time until they discover what we have here," Casey Severe.

When that happens, Pendleton will see an influx of people. And while more people means a busier Pendleton, it also means economic growth.

"It's gonna happen," Severe said. "I really believe that."