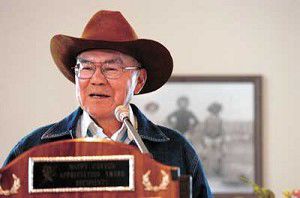 Ronald Pond speaks to the crowd Friday night after receiving his Happy Canyon Appreciation Award at the Roy Raley Room on the Round-Up Grounds in Pendleton. <i>Staff photo by E.J. Harris</i> 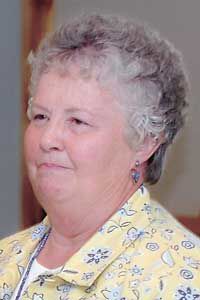 Ronald Pond speaks to the crowd Friday night after receiving his Happy Canyon Appreciation Award at the Roy Raley Room on the Round-Up Grounds in Pendleton. <i>Staff photo by E.J. Harris</i>

Friday night, members, families and the community of the Happy Canyon Night Show gathered at the Roy Raley Room on the Round-Up grounds to congratulate this year's two Appreciation Award recipients.

This year the board chose Mary Lou Fletcher and Ronald Pond as the two to receive the award and add their names to the honorary plaque.

Pond leads in Happy Canyon and for tribes

Pond, who is the associate director for the Plateau Center for American Indian Studies at the University of Washington and lives in Pullman, said it's always nice to come home to Happy Canyon.

"I miss home a lot," he said. "And so, it's always a welcome spot to come back and be a part of something like this."

Pond said he was born at McKay Creek in 1939, he said, and loved the opportunity to grow up on the Umatilla Indian Reservation.

Pond began in the show before he was likely to remember. He started in the cradle boards with his mother on horseback. When he was 8 years old, he moved to the top level to join the war party, where he continued until Pond was 34.

During his acceptance speech for the Happy Canyon Appreciation Award Friday night, Pond noted the importance of Happy Canyon's history.

"It's so important to think back on the old Happy Canyon," he said, "and see how it evolved through time. Some changes were made but it's still the same, still Happy Canyon."

Many people spoke on behalf of Pond, thanking him for his service not only to the Happy Canyon Show but to the Confederated Tribes of the Umatilla Indian Reservation. They commended him for the example he shows not only by achieving a doctorate-level degree and supporting education, but also in upholding tribal traditions.

His niece, Marjorie Waheneka, spoke of her time growing up with her uncle and the leader she's seen him as throughout his life.

Waheneka said Pond is now undertaking the role of family elder. She named off grandparents, great uncles and other elders in her family who came before him.

"All of them, they're all gone now. But they were the ones who taught us about fishing, hunting, digging roots, processing deer hides. They taught us about drumming and singing, dancing. How to present yourself. Dignified. Proud. From the heart," Waheneka said. "That's how Uncle and Aunt present themselves when they dress up."

In his acceptance speech, Pond emphasized the importance of tradition both in the Happy Canyon show, and in life.

"We never know when our last chapter will take place. Still the same, we have a role, we have a duty and responsibility," Pond said. He said a part of that responsibility is Happy Canyon. "And I'm very thankful to be a part of it. The show is a part of our traditions. The traditions are only as strong as the people who uphold them. ... And that's how we bring up our children. It's what we cherish with our family."

The calm in the storm

Mary Lou Fletcher's husband, Robin Fletcher, took to the lectern Friday night to tell a little story about his and his wife's involvement in the Happy Canyon Show.

They once had horse called "Lemon" which Robin pronounced, "lem-ON," Robin said. The horse was white in the winter and yellow in the summer and Robin would ride him on stage for the show.

"When Mary Lou went out to get him for the show one night, he bit her," Robin said with a laugh. "I said, 'you know, if you take a switch out there, you'll get his attention.' Well, she got his attention."

The first night she did that, when Robin rode Lemon out on stage, Lemon bucked the whole way.

"He bucked clear across the stage and stood for a minute and bucked some more," Robin said. "So the next night I got on him and he did the same thing but I noticed when I went by the booth they were holding score cards the second night."

That was just one of many stories Mary Lou has stacked up in her years of involvement with Happy Canyon.

Mary Lou and Robin were married in August 1961 and one month later she found herself hip deep in Happy Canyon.

"I can't think of a better way for a person to get to know the people of Pendleton but to be dropped into the middle of Happy Canyon," Mary Lou said during her acceptance speech.

Mary Lou quickly lent a hand in makeup, where she stayed until 1970. She also sewed outfits in the costume department.

"Doing makeup for people I got to know so many folks," she said. "I've enjoyed it so much for all these years."

When Robin served as director from 1963 to 1970, Mary Lou began putting together the show's program. For the years Robin appeared in the show on his horse, Blackie, Mary Lou made sure he was saddled before and taken to his pens after.

For the past 20 years, she's worked in the Properties Room, cleaning it before each September and inventorying it after Round-Up week.

Then he redirected his attention to Mary Lou, saying, "thank you for everything good you do for the family."