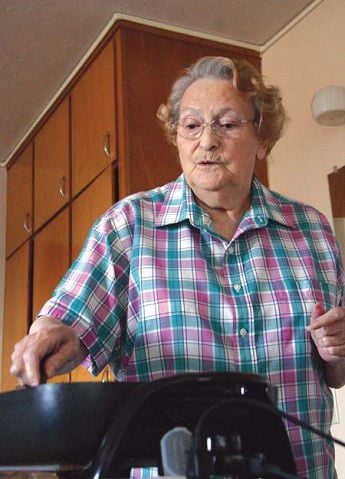 Averill Lane fries up some chicken cutlets in the Willowbrook Terrace Transition Room. The cooking experience is her first since a stroke turned her world upside down one month ago.<BR><I>Staff photo by Kathy Aney</I> 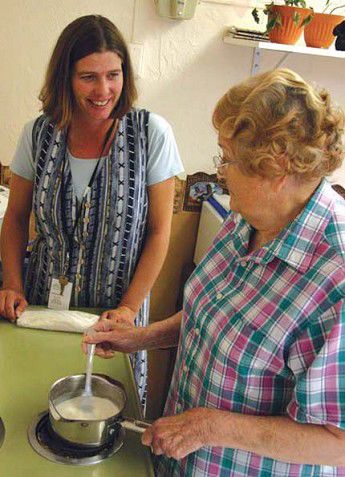 Averill Lane fries up some chicken cutlets in the Willowbrook Terrace Transition Room. The cooking experience is her first since a stroke turned her world upside down one month ago.<BR><I>Staff photo by Kathy Aney</I>

A satisfying series of sizzles emanated from the pan and Lane planned her next move. Sitting on a nearby lounge chair, Kim Benson watched the 87-year-old closely, injecting humor to get her to relax.

Kim Benson, an occupational therapist at Willowbrook Terrace, was shepherding Lane as she spent a week in Willowbrook's brand new transition room. The program is a buffer between institutional and regular life for residents who are headed home.

A month ago, Lane suffered a stroke that left her virtually helpless. She couldn't walk or feed herself. The left side of her world was gone, a black sheet. She tried to browse the paper like usual, but couldn't decipher what she saw. Her sister, calling from Florida, didn't recognize her voice.

"Everything was changed - bang - overnight," said Lane, of Hermiston. "It was quite a shock."

She stabilized in the hospital and then moved into Willowbrook Terrace, a Pendleton assisted-living facility. To make the steep climb back to health, Lane initially needed help 24/7.

A month later, Lane almost was ready to go home. She moved into the transition room, a miniature apartment with sofa, reclining chair, kitchenette, bed and private bath.

As the suite's first resident, Lane continued occupational, physical and speech therapy while easing back into cooking, shopping, doing chores, paying bills and getting around in the community.

"They experience going out into the real world," Benson said. "This gives them a chance to build their confidence back up."

"It was too big a jump," Kennedy said. "It was a shock for (residents) to go from someone taking care of them 24 hours a day to going straight home," Kennedy said.

Late last week, Lane experienced grocery shopping, post-stroke. Under a therapist's watchful gaze, she cruised the aisles at the Pendleton Safeway store, a place she once worked. She placed a half gallon of milk in her carton, then some bananas. She browsed the cookies, plucking a box of Chips Ahoy from the shelf.

With each new experience, Lane's comfort level goes up a notch, she said, though life will never be quite back to normal.

"My driving days are done," said Lane, looking wistfully at her husband Vern.

Vern, tethered to an oxygen tank and perched on the sofa, watched his wife tend her chicken cutlets. The Hermiston man has made the daily drive to Pendleton since Averill had her stroke. His wife is about 60 percent back to normal, but driving is out of the picture, he said, flashing Averill a look of commiseration.

"She's the happiest women in the world when she's behind the wheel of a car," Vern said.

Other than driving, Lane anticipates a slow climb back to normal, including being able to read. What was black before is now a shimmery field that gets clearer every day.

"Are you up for this?" Benson asked Lane.

"I'm up for anything," Lane said, "except the same four walls."