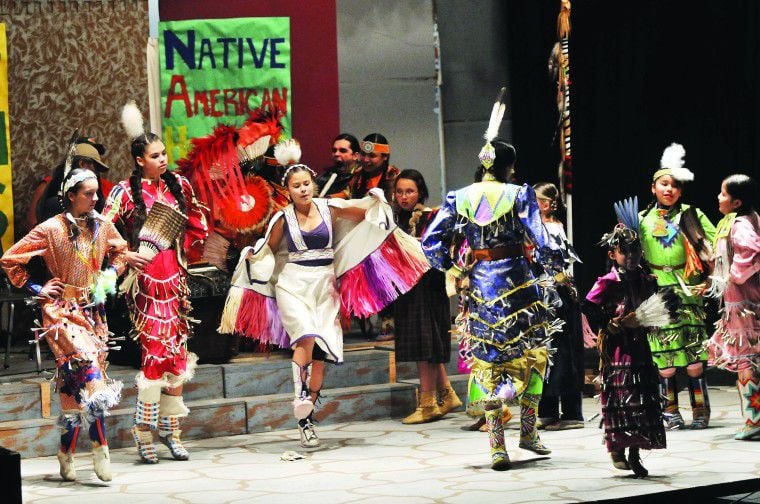 Members of the Daughters of Tradition dance on stage Monday during the Pendleton High School’s Native American Heritage Day celebration in Pendleton. 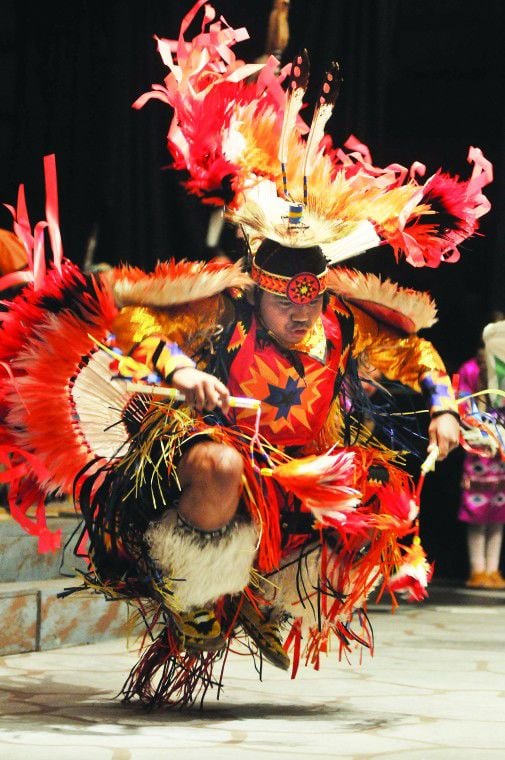 Members of the Daughters of Tradition dance on stage Monday during the Pendleton High School’s Native American Heritage Day celebration in Pendleton.

A flurry of colors spun around the stage of the Pendleton High School auditorium. Bells of the jingle dresses shook to make a torrent of clicks and clatters. Girls and teenagers kicked up their heels and stayed on their toes as they danced around and around.

These were the Daughters of Tradition, a group of American Indian girls from Washington Elementary, taught by Sally Kosey and Pendleton High School students, including Marissa Baumgartner. The group was part of the PHS Native American Heritage Day celebration at the high school Monday night.

Both the Daughters of Tradition and the PHS Native American Studies class strive to teach basic traditions, many of which were showcased at the celebration.

Baumgartner said she taught some of the girls from Washington Elementary the dance, while others knew it from traditional dancing.

Baumgartner herself has been dancing since she was 8, but she admitted it is different teaching dancing to younger kids.

I like it a lot, she said. I like the little kids and being around little kids.

This was the fourth annual Native American Heritage Day at PHS, but the first one not celebrated during an assembly.

Baumgartner said she preferred the assembly because it got the rest of the student body involved.

Randy Minthorn, event coordinator and counselor at PHS, said he had mixed feelings about which was better.

While very few students outside the class came to Monday nights event, about 40 people from the American Indian community came. It also brought members of tribal leadership, such as Board of Trustees member Fred Hill, who gave the closing comments.

Damian Anderson performed a guitar solo. The teen proved he could roll with difficult circumstances. When he stepped up to the front of the stage that his guitar was out of tune. He quickly tuned it up, but then had to battle holding it up without a strap.

He called his solo a simple chord progression, but elicited loud applause from the audience.

I was surprised,?Anderson said afterward. I thought I would only hear one clap and the next thing I know people are whooping and shouting.

Along with blending new and old traditions, Minthorn said the Native American Studies class also blends varying views. For instance, one student is an Alaskan native. He said the class has had Sioux and Navajo, too.

The class teaches local tribal ways, but tribal etiquette can teach students how to conduct themselves in the longhouse or at powwows.

Kids sign up to take the class to learn,?Minthorn said.