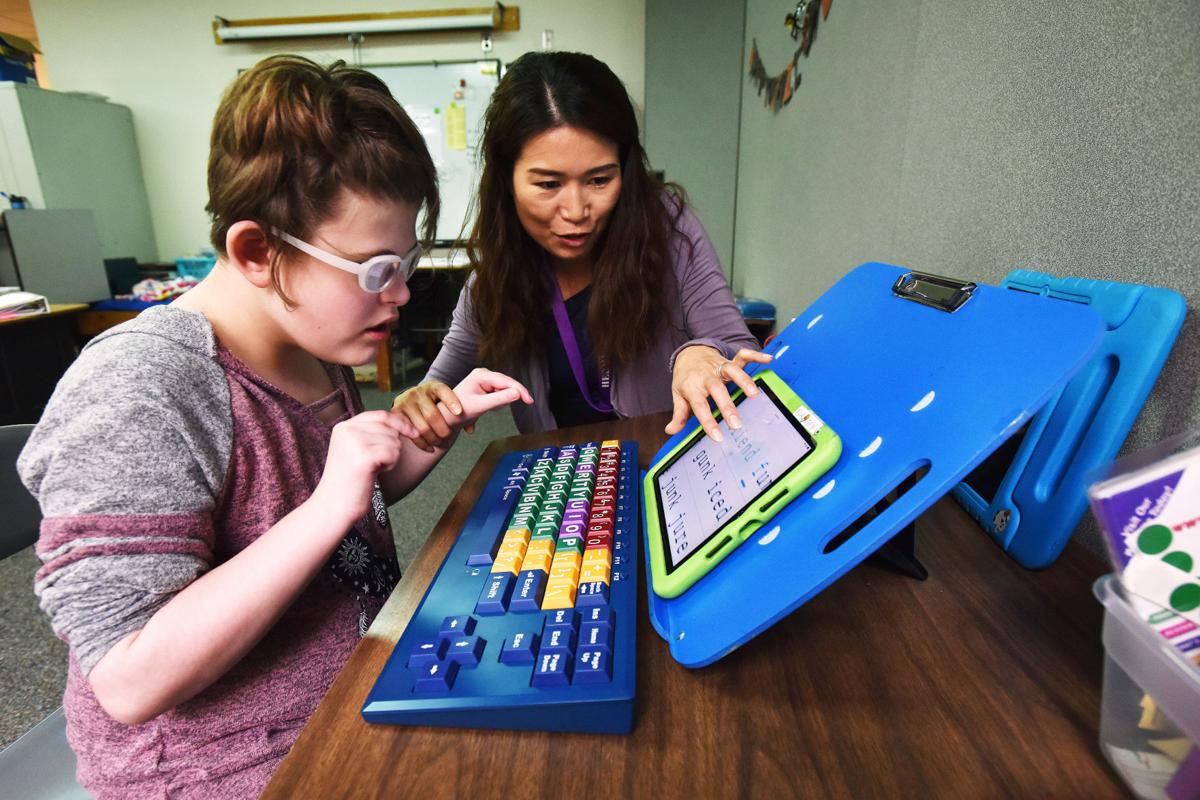 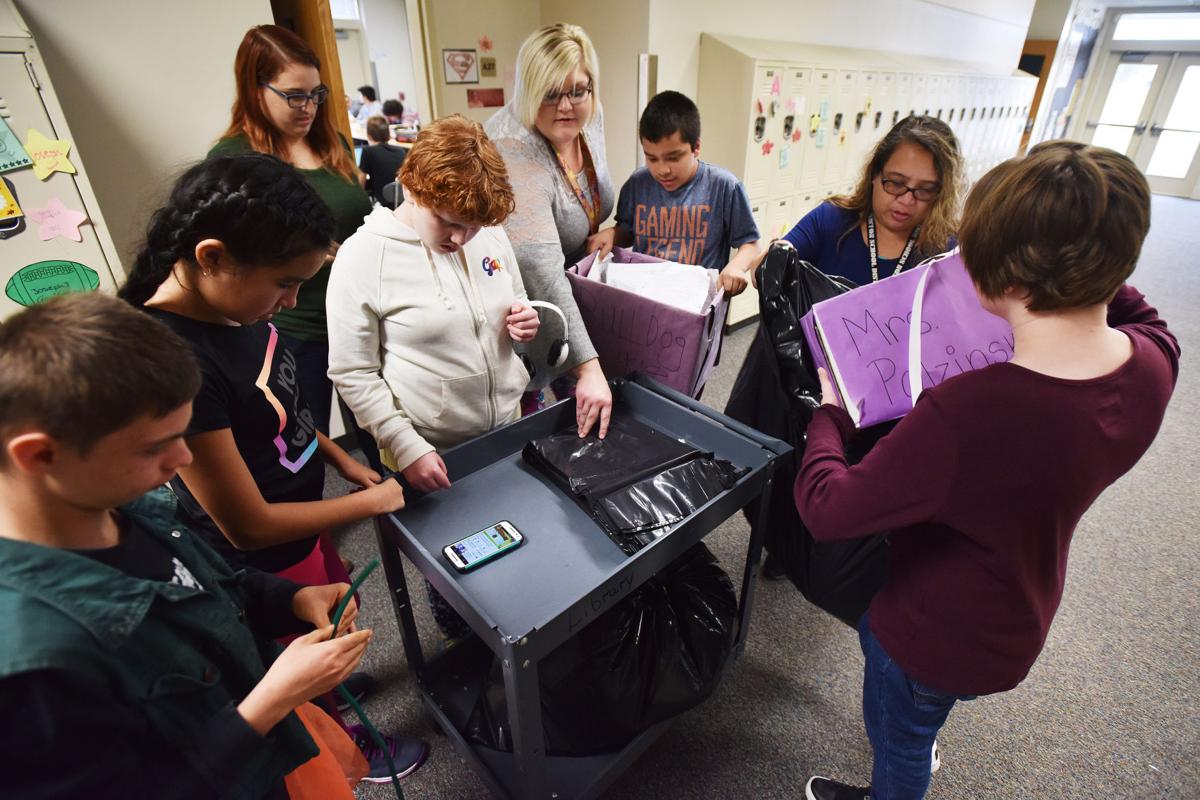 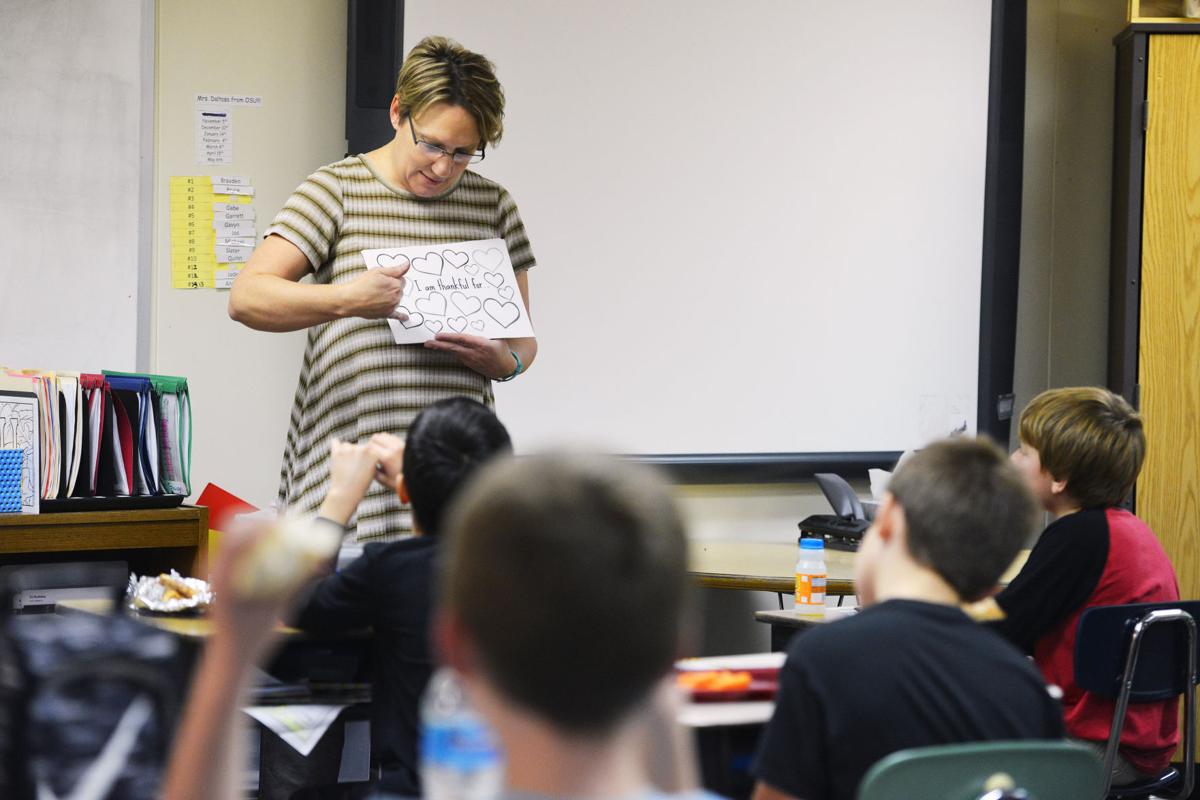 Instructor Kendra Scott asks her students to name things they are thankful for during class Thursday, Nov. 1, at Rocky Heights Elementary School in Hermiston. 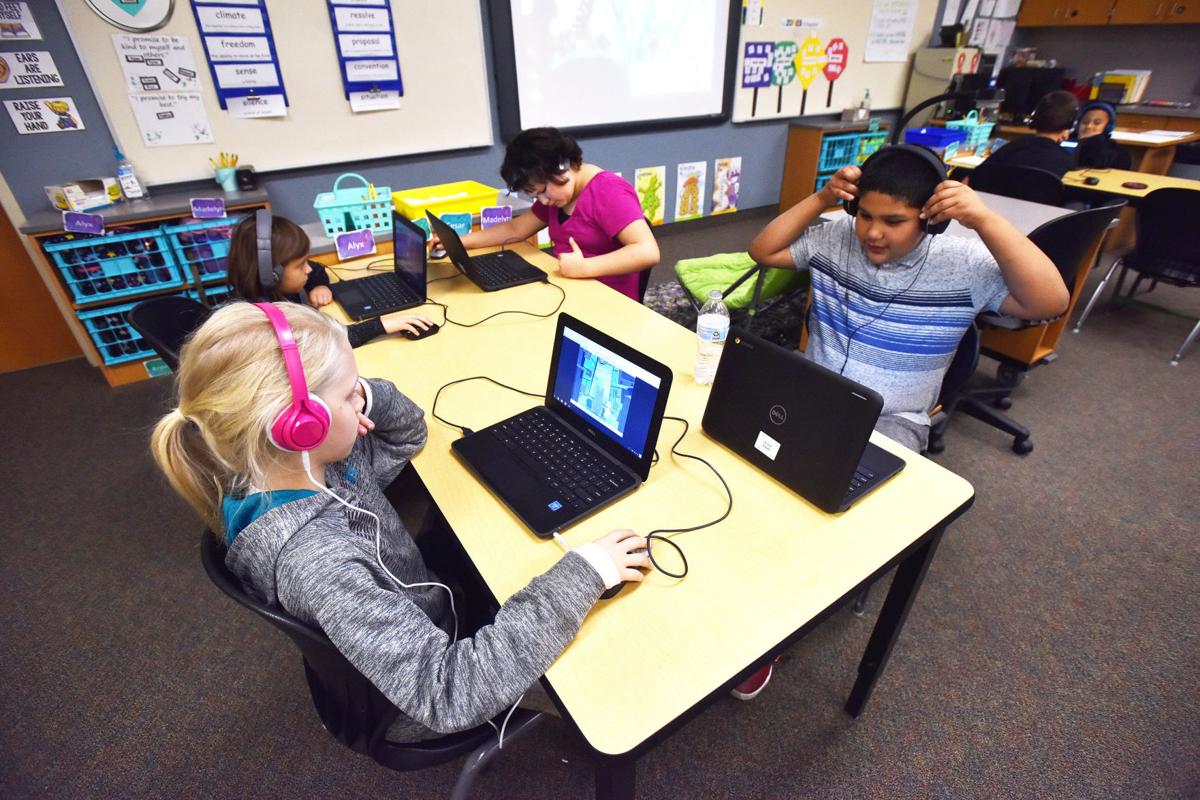 Instructor Kendra Scott asks her students to name things they are thankful for during class Thursday, Nov. 1, at Rocky Heights Elementary School in Hermiston.

During a social skills exercise in a Rocky Heights Elementary School classroom, instructor Kendra Scott asks her students to think of things for which they’re thankful.

Just back from lunch, some students say their favorite meals, while others name family and friends.

“Our teacher,” one savvy student pipes up.

The students are part of Rocky Heights’ behavioral skills class, one of several in the Hermiston School District for students with special needs. Students in work on handling behavioral issues, such as anger management and coping with trauma.

The Special Programs department serves students with a range of needs, including speech, autism, developmental disabilities and behavioral issues. Many of the programs have specialized classrooms housed at different schools throughout the district.

Amanda Beckley, the lead behavior specialist at Rocky Heights, said teachers collect data every 30 minutes to track student progress on specific target behaviors. Those include using gentle words, gentle touch, respect for self and respect for others.

“As far as direct instruction for social skills, we work on everything,” she said. “How to make friends, solve conflicts, how to calm your body,” she said. “The biggest difference between this and other classes is that we focus on it every minute of class, even when math is happening.”

Though these students spend some or all of their academic time in specialized classes, they join their grade-level peers for classes like P.E., music, and art.

“Whenever we remove a student to a special classroom, we always have a plan to get them back into a traditional classroom,” said B.J. Wilson, Hermiston’s Special Programs director.

Beckley said while their strategy has largely stayed the same since she started in Hermiston 18 years ago, a growing number of students need those services.

“We look at it more from a trauma-informed lens than before,” she said. “The need for kids dealing with trauma has increased. We have an alarming number of students in the foster care system.”

Wilson said to be placed in special programs, a student has to go through an assessment. If a teacher or parent thinks a child might need special services, the district has evaluation specialists who will determine what services, if any they need to receive.

In other areas, Hermiston measured close to or better than the state average.

Though Hermiston has retained some strategies and many staff members, the way special programs operates is different from the days before it left the InterMountain Educational Service District (IMESD).

It has been nearly four years since Hermiston left the ESD, stating it wanted to have more control over funds the ESD gets from per-student payments from the state. When Hermiston left, it took control of its special programs and services like assessment and evaluation, speech language pathologists (SLPs) and school psychologists.

Wilson said staffing levels didn’t really change. There are about 30 staff members in special programs. But, he said, the level of access between schools and special educators, as well as the roles of special programs staff, are different.

Wilson said that while the ESD always met service requirements for students on IEPs (individualized education programs), having their services in-district has allowed them some more efficiency.

Because the ESD serves 19 districts from Morrow County to Baker County, he said there were times when Hermiston would have to postpone helping a student because a provider, such as an SLP, would be in another district that day.

“Through no fault of their own, the ESD couldn’t drop everything,” he said. “Now we can respond instantly.”

IMESD Superintendent Mark Mulvihill said staff levels in the IMESD are also about the same as before. It now has 13 full-time school psychologists, compared with 13.5 before Hermiston’s departure. There are now 15 speech language pathologists, as opposed to 16 before the split.

But Mulvihill said while specialists would have to travel to several different districts, most IMESD providers live in or near the districts they serve.

Wilson said they discovered some of their assessments were culturally biased, and a disproportionate number of students were being identified as special needs when the issue was actually related to language or culture.

“We’ve tried to tailor our assessments to remove as much cultural bias as possible,” he said.

But hiring speech language pathologists and school psychologists is still a challenge for both entities, and Wilson said there tends to be more turnover in those positions.

He said the district struggled with speech therapy for a while, but quickly realized that speech therapy by video, or “teletherapy,” was not working.

“Parents resoundingly said it was not effective,” he said. The district now uses an outside agency, called the Hello Foundation, to provide speech therapy, which operates on-site.

The ESD funds programs from a few different sources. The majority of the programs Hermiston opted out of are covered by the IMESD’s general fund. About 95 percent of that money went to the schools, based on how many students they have enrolled, and about 5 percent goes to the ESD itself.

Mulvihill said when Hermiston withdrew, they received about $2.4 million. But the ESD also provides some services that are based on state and federal grants. Hermiston still receives several services, including for autism, deaf and hard of hearing students, vision and traumatic brain injuries.

“We have to serve the kids that reside in those towns, not the districts,” Mulvihill said.

Wilson said parents are constantly included, with both sides helping students understand what behaviors are acceptable at school and at home.

“One of the keys is partnerships with home,” he said. “Behavior needs to be reinforced there.”

Debbie and Angelo Herrera have a daughter who is now 15, and has received special services in Hermiston since she was a small child.

Angelo said there have been some ups and downs since the switch from the ESD.

“The first thing that comes to mind is the turnover,” he said. “It seems like there’s always an SLP job open.”

Previously, he said, their daughter had the same SLPs since she was in elementary school.

“Now she has a pretty good rapport with the girls,” Debbie said. “But it took a little bit.”

Another parent, Brandalynn Gorman, has had some complaints. She said her son, who is autistic, had been violent with another student in class, lashing out due to a sensory disorder. After suspending him several times this year, his school attempted to shorten his day. But Gorman said they tried to do so without her permission. She said she was in the middle of working through the situation with the district, but so far was dissatisfied with the way things had been going.

Wilson said he could not comment on the specific incident. He said sometimes staff will recommend a shortened day for a student if they feel it’s beneficial. But he said they will not do so without the input of the parent.

Angelo said he doesn’t feel that services are vastly better in Hermiston now, but said they have the potential to be.

But he added that some people expect services to improve for their child automatically, without advocating for them.

“We get involved,” he said. “You can’t just expect things to happen, there’s got to be some follow through.”

“But when we talk to special programs, they’re usually listening,” Debbie said.