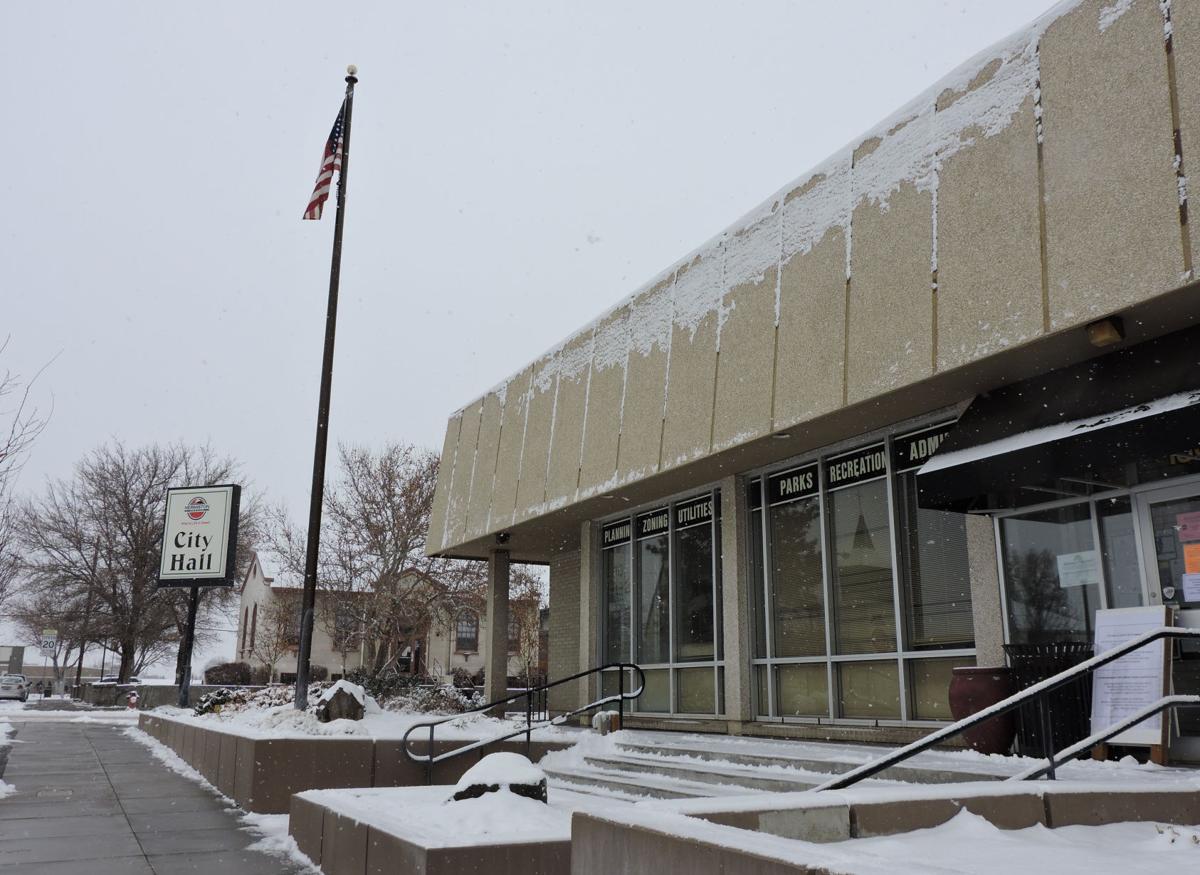 Fire engines sit at the ready on Dec. 17, 2019, while firefighters check out the interior of Hermiston City Hall. 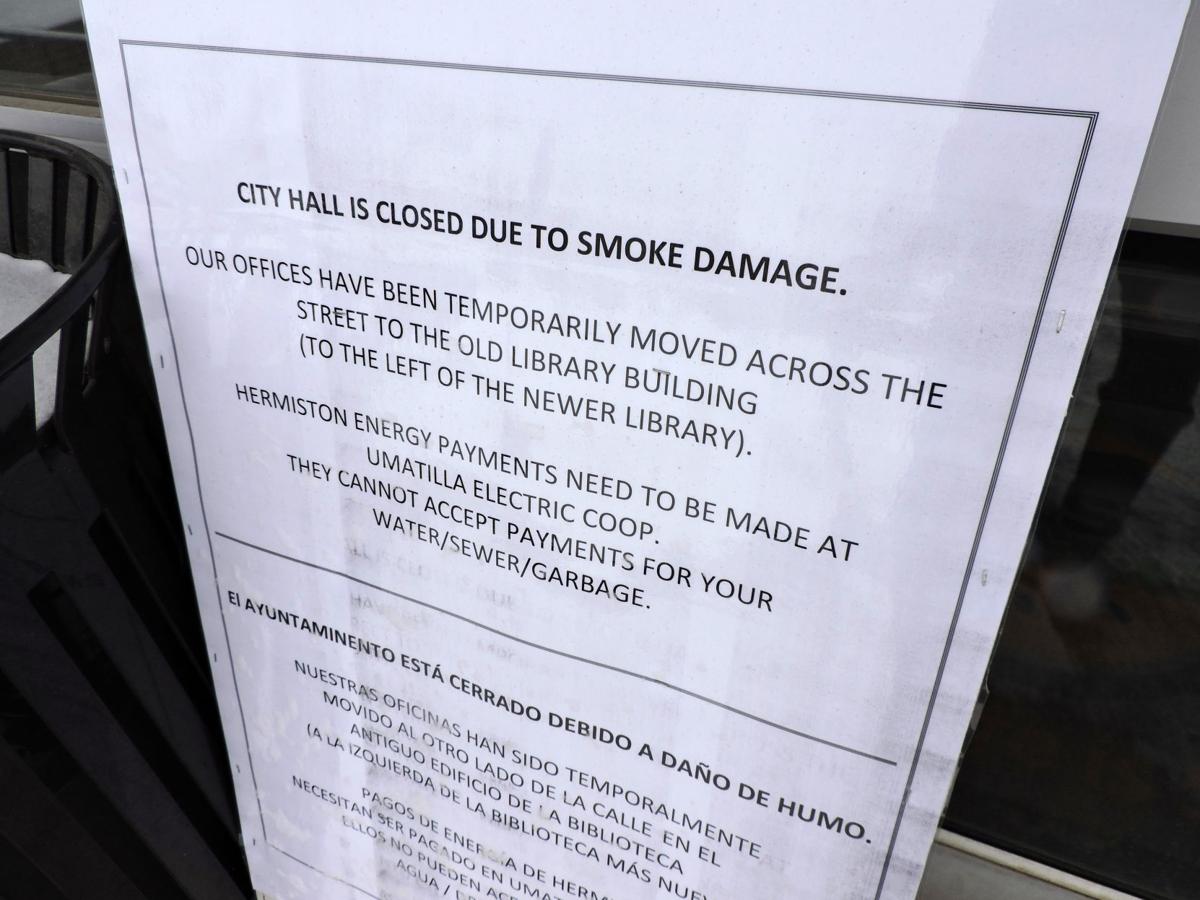 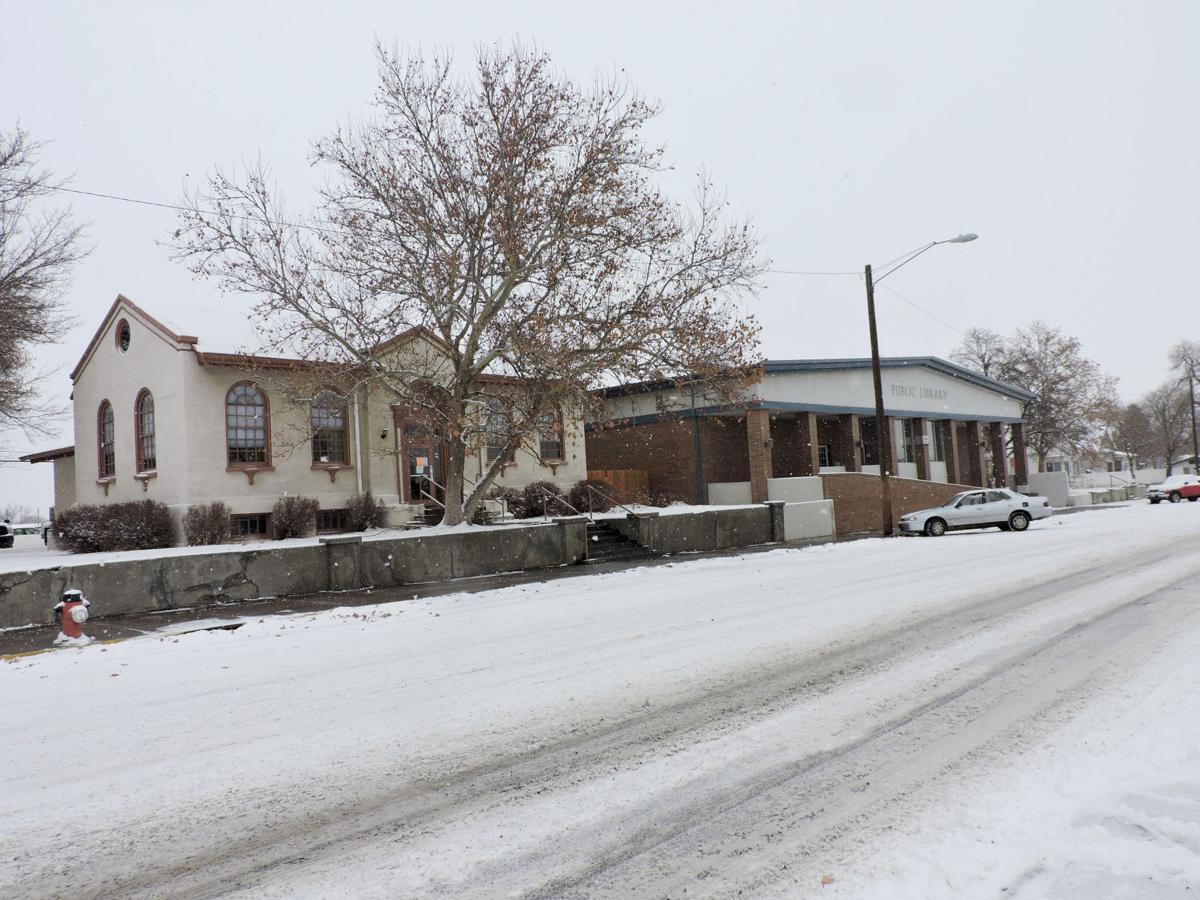 The former Carnegie Library and the Hermiston Public Library across from city hall could house city staff for the next two years if the city decides to rebuild city hall rather than repair it.

Fire engines sit at the ready on Dec. 17, 2019, while firefighters check out the interior of Hermiston City Hall.

The former Carnegie Library and the Hermiston Public Library across from city hall could house city staff for the next two years if the city decides to rebuild city hall rather than repair it.

HERMISTON — Hermiston City Hall could remain closed for much longer than previously estimated if the city council decides to replace the building rather than repair it.

The building, originally built as a bank in 1965, was damaged by a fire in the HVAC system on Dec. 17, 2019. City Manager Byron Smith told the council on Monday night that he didn’t have all the final quotes in yet, but it would require roughly $100,000 to replace the damaged HVAC system and pipes buried in concrete, put in new carpet and repaint.

The city council has included construction of a new city hall in its goal-setting sessions in recent years, as the city has run out of room and had to put staff in other locations, such as the old Carnegie Library and Hermiston Community Center. Smith told the council Monday that it may make sense to push up the timeline.

Smith and several city councilors discussed the limitations of the current city hall, which has rooms spread out over five levels, some of which are not ADA-accessible. That includes the bathrooms, which are located on one of the basement levels, and the council dais.

Mayor David Drotzmann said he believed the inaccessibility of city hall was a barrier to people with disabilities wanting to work for the city or serve on councils or in office.

“We put a sign up that says Hermiston is an inclusive community — except for city hall,” he said.

While he agreed that Hermiston needs a more accessible city hall, he said he also worried about rushing the decision too much, and asked how long staff could last in their current locations.

Smith said one section of basement in city hall that wasn’t connected to the main HVAC system has reopened, while other city staff have been farmed out to alternate locations, such as the Carnegie Library and the offices of Anderson Perry & Associates. It has been crowded and uncomfortable, he said, but they could make it work for a handful of months.

If the city council decided to put whatever insurance payout the city receives toward a new building, Smith said they could remodel the basement of the library — where Monday’s city council meeting was held — into city offices and continue to use the Carnegie Library for the building and planning departments until a new building is built at the location of the current city hall.

He said architects had told him they could likely have plans for a new city hall ready this summer if they started soon, and then construction would take an additional 18 months after that point.

Councilors said they were not comfortable making a decision on Monday night, without more information and public input, but directed Smith to return in the next month or so with concrete details about costs, financing, etc.

“This could present an opportunity,” councilor Roy Barron said.

Councilors approved an increase in garbage rates on Monday night. The rate for a 90-gallon container, which most customers use, will go up $1.55 to $18.80 a month starting in February.

Sanitary Disposal Inc., which handles the city’s garbage and recycling, requested permission for the rate increase to help cover increases in the cost of doing business, such as fuel and insurance, and the decreases in revenue from problems with the recycling market. Assistant City Manager Mark Morgan said minimum wage in Umatilla County has gone up by 20% since the last rate increase in July 2016.

Residents will also see another increase on their water and sewer bills in March. When the council approved a rate restructure last year, they added a much smaller annual adjustment based on inflation to keep up with rising costs of labor and materials. This year’s increase will be 1.8%.

The city adopted a pilot program for the food truck pod in 2019, set to run from April 1 to Oct. 31 in the parking lot on Orchard Avenue across from the Hermiston Post Office. They provided garbage cans, a portable restroom and picnic tables, and Hermiston Energy Services installed a pole that provided lighting and electricity to trucks on the site.

City planner Clint Spencer told the council that the original goal was to have at least four trucks on site the entire summer, but they ended up having two to three there most of the time. However, for the trucks on site, the season ended up being so successful they asked to extend the season through the end of November.

Patick Hunt, who ran Southern Twain BBQ there, said he doubled his sales from when he was parked in Pendleton previously, and he no longer had to haul his truck to Pendleton from his Hermiston home.

He said the main barrier to getting more trucks in was the lack of potable water and wastewater collection on site. A lot of vendors were interested until they were told they wouldn’t have those things, he said. He and Spencer also noted difficulties with getting customers to park in the lot across the street like they were supposed to, instead of pulling up to the trucks.

He suggested that there might be some benefits to moving the pod somewhere like Butte Park, where they would be near the aquatic center, splash pad, Funland playground (once it’s rebuilt) and soccer fields.

Councilors said they considered the experiment a success.

“I definitely think we should continue this,” Doug Primmer said. “It’s proven its worth.”

The question was whether to invest in water and other more permanent amenities in the current site or look at moving the food pod somewhere else.

In the end, councilors voted to reopen the food pod in its current location in April, giving them time to collect information and make a decision on creating some sort of nicer, more permanent site in the future.