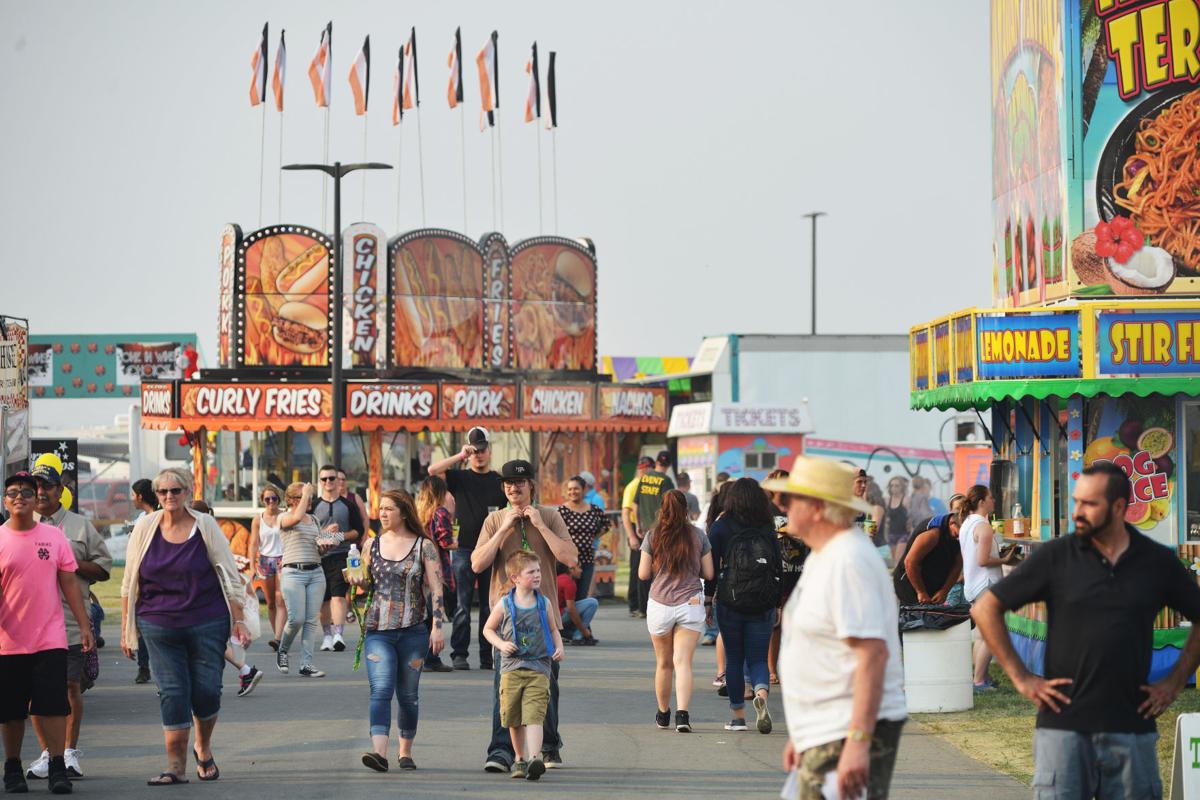 Fair goers brave the triple-digit heat to attend the Umatilla County Fair on Friday at the Eastern Oregon Trade and Event Center in Hermiston. 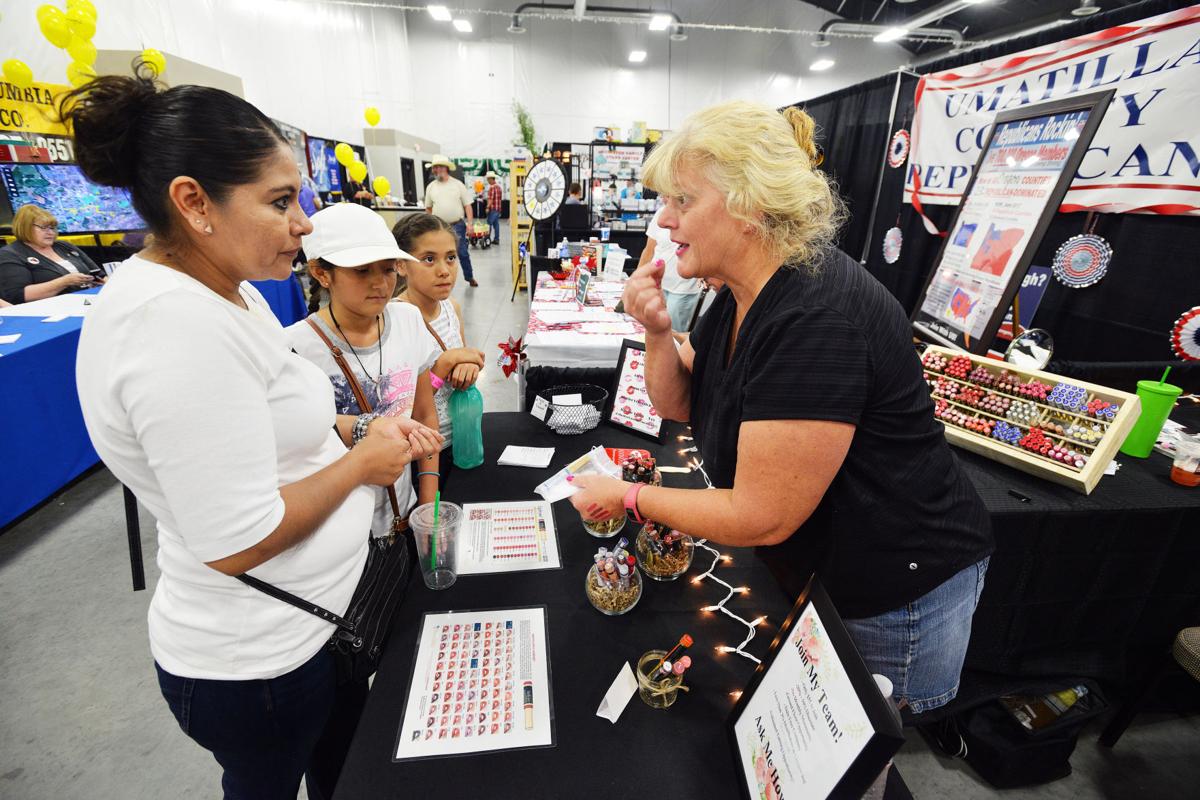 Suzi LeBaron of Milwaulkie tells Maria Castro of Umatilla about different lip colors offered by Lip Sense in a booth in the exhibit hall on Friday at the Umatilla County Fair in Hermiston.

Fair goers brave the triple-digit heat to attend the Umatilla County Fair on Friday at the Eastern Oregon Trade and Event Center in Hermiston.

Suzi LeBaron of Milwaulkie tells Maria Castro of Umatilla about different lip colors offered by Lip Sense in a booth in the exhibit hall on Friday at the Umatilla County Fair in Hermiston.

Fair and rodeo attendance is up this year, according to organizers, but exactly how much is unknown.

Earlier in the day, she said the fair’s organizers feel “pretty amazing” about the fair’s success in its new location, and said people have been saying they appreciate the extra elbow room.

“That’s been a lot of the comments, that there’s so much more room that even though patrons know there are more people there they don’t feel crowded,” she said.

On the rodeo side, Farm-City Pro Rodeo board member Dennis Barnett said they didn’t have exact attendance numbers, but based on factors such as beverage sales he would estimate attendance Wednesday and Thursday were up about 15 to 20 percent from previous rodeos.

He said most years Saturday’s rodeo sells out, but thanks to an extra 2,500 seats in the new arena all interested fans will likely be able to get a seat for the week’s final performance.

“If we sold out this weekend you would see me jumping up and down, because we don’t expect that because of the increased capacity,” Barnett said.

He said the new arena has been performing extremely well, especially considering how little time there was to complete construction, and so far the rodeo board has only seen minor things to tweak for next year.

“We’re excited,” he said. “We think Friday and Saturday are going to be big.”

While the fair’s staff pull together numbers, volunteers and attendees couldn’t tell whether attendance was up or down due to the larger fairgrounds and different layout.

Linda Perry, who was trying to cool down under a canopy in the food area, said Friday afternoon it seemed like there were fewer people than the afternoon she visited the fair last year.

Friday reached 104 degrees, just one degree shy of the record for Aug. 11, which was set in 1971. On the same day last year the temperature was 86 degrees, and the average for the day is 91, according to data from the National Weather Service. Many people speculated that the temperature might be keeping some people home or inspiring them to hit up the fair in the evening instead of the afternoon.

Perry said despite the heat she loved the new fairgrounds.

“I don’t feel like it’s so crammed in,” she said. “I think it’s absolutely fabulous they got to come out here.”

Landon Vandehey, 15, was using dribbles of water from a cup to cool off his black Australorp chicken Zanna. The Hermiston FFA student said it seemed to him like there were more people at the fair overall.

“Attendance has been quite good,” he said. “We got a good bit of people visiting the small animal barn, because usually it’s less populated.”

He said he felt like the more visible location, and the fact that there was more room to mill about inside, helped bring more people inside the barn.

As the weather continues in the triple digits, volunteers and attendees have been grateful for the chance to escape the heat inside the event center building, which is fully air-conditioned and has Wi-Fi.

Superintendents Suzie Reitz and Kendra Scott were some of the lucky ones stationed inside, in the conference room where the photography was displayed.

Reitz said the number of photography entries was down a little, “probably because of the new facility and people were unsure.” Scott suggested the new location may also be why it seemed like fewer people were coming to look at the photography to — not everyone knew where it was. Many people had a hard time finding everything from bathrooms to 4-H exhibits, as evidenced by the growing number of signs put up throughout the week.

Still, Reitz said, the superintendents were grateful to make the change to an air-conditioned building where exhibits were safe from the gusting wind that has hit the fair in some years past.

Another change from previous years was the free shuttle that ran Friday and will continue Saturday. The bus runs on a continuous loop from 2-10 p.m. between the fairgrounds, Hermiston Conference Center, city hall, Hermiston High School’s baseball field and the Wal-Mart parking lot near McDonald’s.

On Friday afternoon the bus helped keep cars from overflowing past the fairground’s paved parking lot by dropping off a handful of families and individuals each half hour.

Alfonso Aguilar, who was waiting in the shade outside one of the fair’s entrance points for the bus to pick him up, said he had parked near McDonald’s and taken the bus from there to avoid the traffic and the five dollar parking fee at EOTEC.