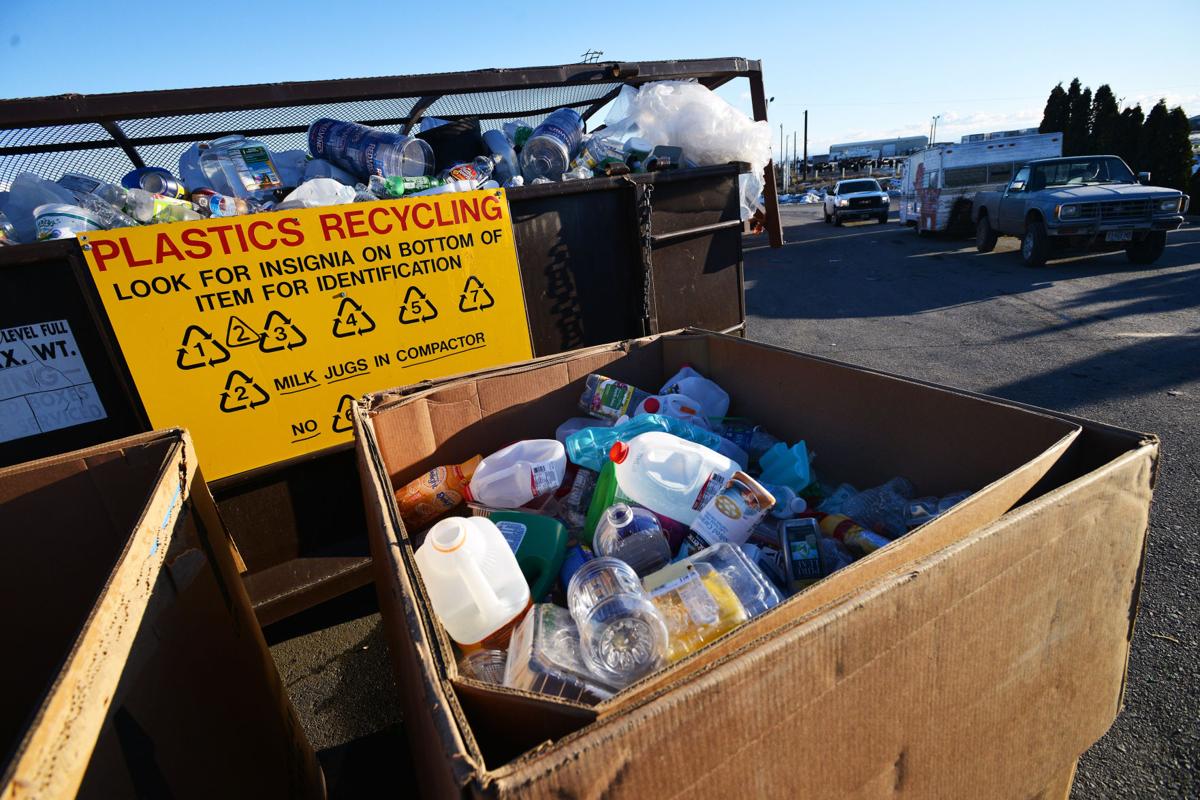 Sorted plastics sit in bins at the entrance to the Sanitary Disposal facility Friday outside of Hermiston. 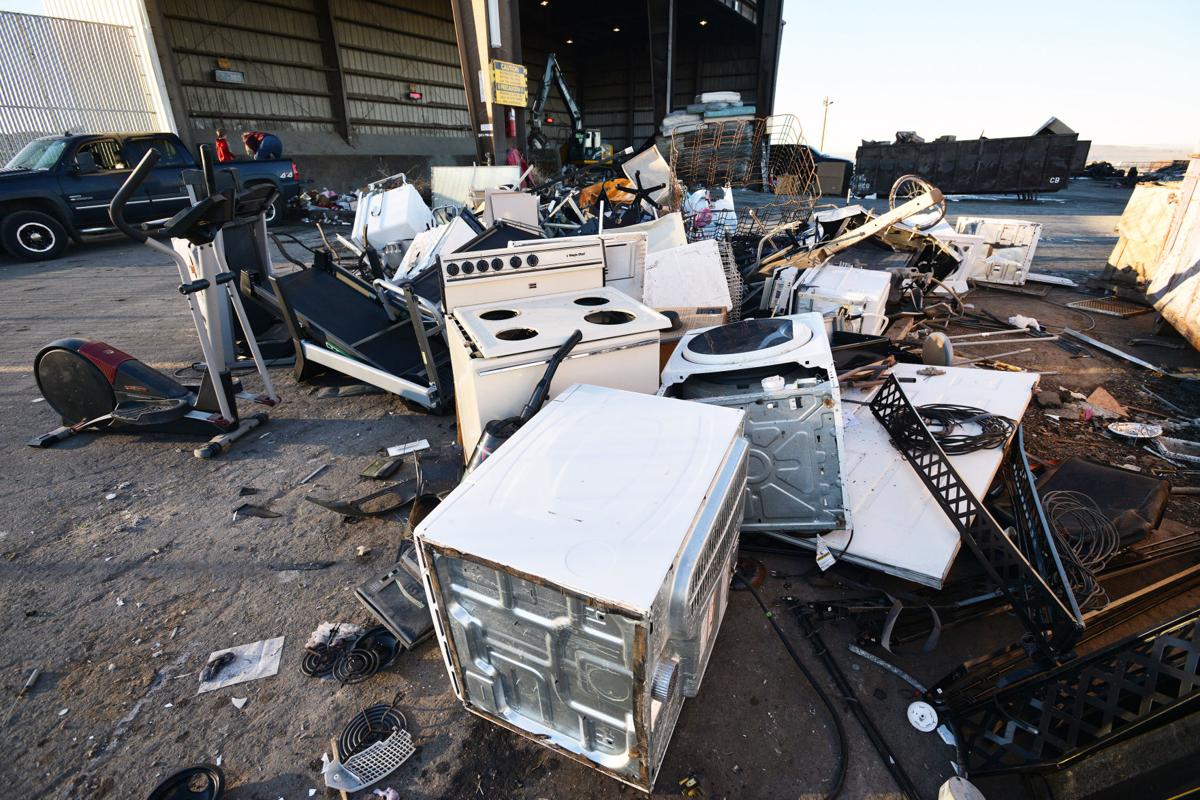 Metal household appliances are separated and await being salvaged for scrap metal at the Sanitary Disposal facility Friday outside of Hermiston. 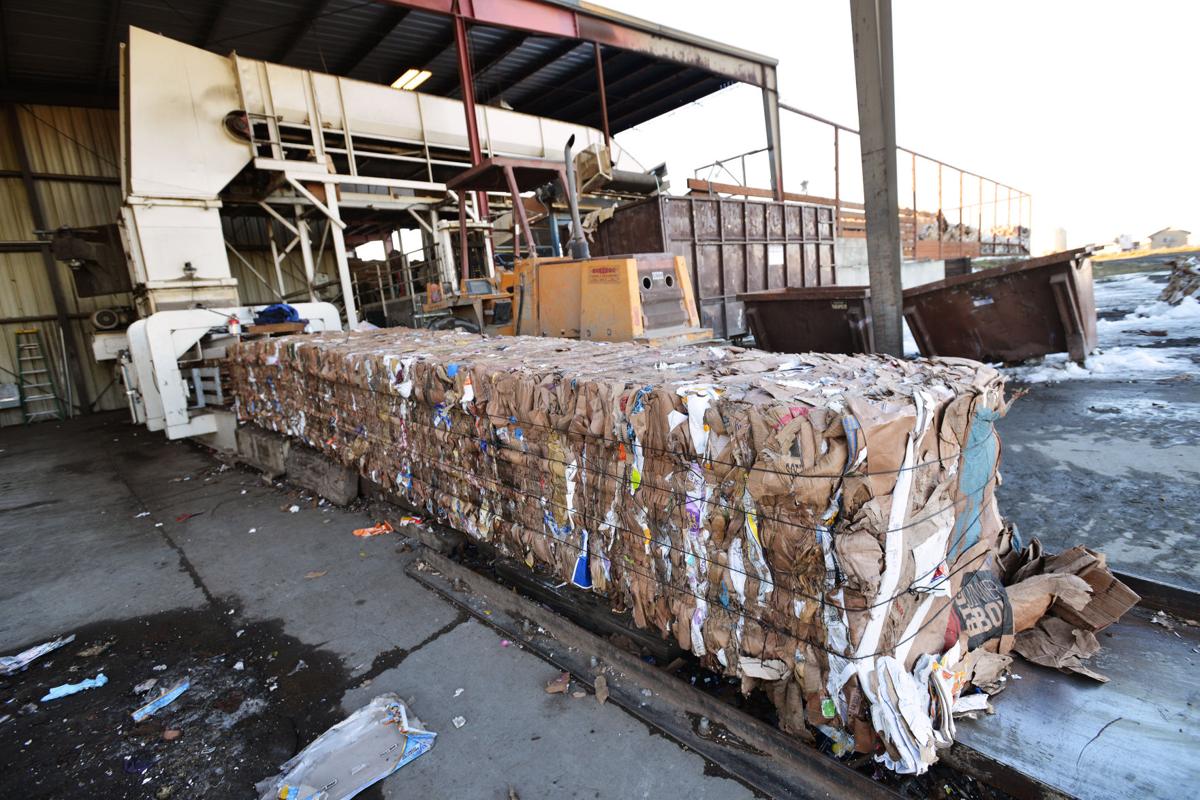 Bails of cardboard await being shipped for recycling at the Sanitary Disposal facility Friday outside of Hermiston.

Sorted plastics sit in bins at the entrance to the Sanitary Disposal facility Friday outside of Hermiston.

Metal household appliances are separated and await being salvaged for scrap metal at the Sanitary Disposal facility Friday outside of Hermiston.

Bails of cardboard await being shipped for recycling at the Sanitary Disposal facility Friday outside of Hermiston.

One man’s trash becomes another man’s new hubcaps in the recycling industry.

Every day at the Sanitary Disposal transfer station outside Hermiston people add to the piles of broken, bulky 1990-era televisions and empty wine bottles, glad to finally be rid of “that junk in the garage.”

But after drop-off those items take on a new life. Stripped down to their components, separated by material and compressed into bales, recyclable objects will eventually re-enter the economy as fodder for everything from steel beams to egg cartons.

“It gets it out of the waste stream, which just makes dollars and sense,” said Bill Kik, maintenance supervisor for Sanitary Disposal.

On Thursday dozens of old refrigerators were stacked in the middle of the yard, evidence of all the area residents who got new appliances for Christmas. The freon will be removed from them and the metal “guts” will be salvaged for scrap metal.

The transfer station doesn’t recycle the materials onsite, but rather collects and processes them for shipping to various recyclers like Clayton Ward Recycling in Kennewick (plastics) and RS Davis Recycling in Hermiston (metals), which turn them back into raw materials that can be sold to manufacturers in the United States and abroad.

“That’s a market that we sometimes have to play,” Kik said, noting that a few years ago the value of cardboard plummeted for a while thanks to market forces in China, where much of America’s recycled cardboard eventually ends up. “A lot of places don’t have the ability to stockpile for long, but we have acres we can put it on.”

Sanitary Disposal doesn’t have a compost heap, but it does transfer food waste from customers like Wal-Mart to Pendleton Sanitary for that purpose.

Non-recyclable garbage is pushed into trailers bound for the Finley Buttes Landfill near Boardman, but Sanitary Disposal employees are inventive in using even “garbage” one last time. Old mattresses are folded in half by the claw of the excavator and used to sweep rubbish from the platform.

“We use them as our brooms,” Kik said. “It keeps the floor nice and clean.”

Recyclables are sorted using various techniques. The public might not differentiate between tin cans and aluminum cans, for example, but if employees put a load of cans in the industrial wood chipper, the same magnet that pulls nails from the wood chips also pulls out the tinned steel cans from the aluminum ones, which are not magnetic.

A big question Sanitary Disposal gets is why the city of Hermiston doesn’t do a curbside recycling program where residents could have their recyclables picked up instead of taking them to the transfer station. The city did study the issue in 2014, but based on interest surveys and cost analysis, determined that curbside recycling would double Sanitary Disposal’s labor costs while only increasing recycling rates by about 2 percent, which would not allow the transfer station to recoup the extra money.

Gina Miller, code enforcement officer for Umatilla County, said the Department of Environmental Quality monitors the amount of recycling that happens in each county and sets goals for them based on population density and other factors. Umatilla County’s goal is to recycle 20 percent of all solid waste, but Miller said the county has consistently surpassed that goal by 10 percent or more every year.

Recycling saves irreplaceable resources, saves energy, saves room in landfills and provides cheaper materials for manufacturers, so Miller said her office is trying to get people to recycle more as they clean up their properties. Last year the county got a grant to run a hazardous waste collection event and Miller said she is always happy to give people information about ways to recycle and compost.

“We’re trying to extend more awareness and education,” she said. “It just has not been a part of our culture.”

Kik said there is definitely more work to be done to help people be better about reusing, re-gifting and recycling.

“A lot of the stuff that gets thrown away you just shake your head and ask why,” he said.

Each transfer station reports to the DEQ how many tons of each material were processed and to which recycling companies they were sent. In 2015, Sanitary Disposal reported it collected about 11,800 tons of material plus 2,370 gallons of used motor oil (bottles and cans returned to the BottleDrop Center for a deposit are not handled by Sanitary Disposal). Kik said the amounts don’t change too much from year to year — most people are pretty consistent with the amount of waste they produce.

Currently Hermiston residents can drop off their recycling at the transfer station, 81144 N. Highway 395, or the recycling center at 22 W. Harper Road. Kik said Sanitary Disposal is still looking for someone willing to let them put recycling containers on property somewhere else in town to replace the former station on Orchard Avenue that was pushed out by the expansion of the current Hermiston School District building.

He said he’s glad residents are using the stations, although there is “a little bit of laziness” on some peoples’ part about not flattening boxes or dumping things in the wrong containers.

When the big metal recycling containers get too beat up, they get sent to Sanitary Disposal one last time, where they are processed as scrap metal and sent to be recycled.