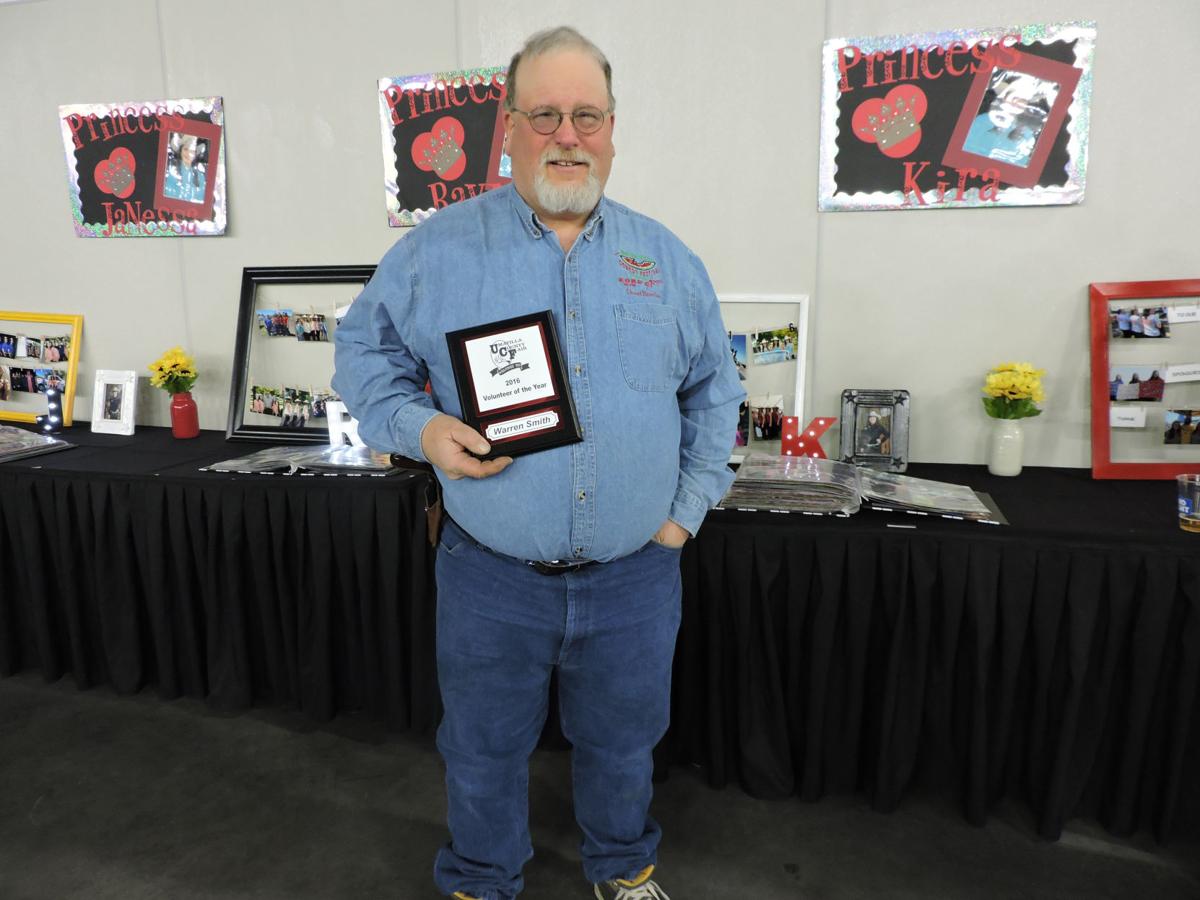 2016 Male Volunteer of the Year Warren Smith shows off his award at the 2016 Umatilla County Fair appreciation dinner. 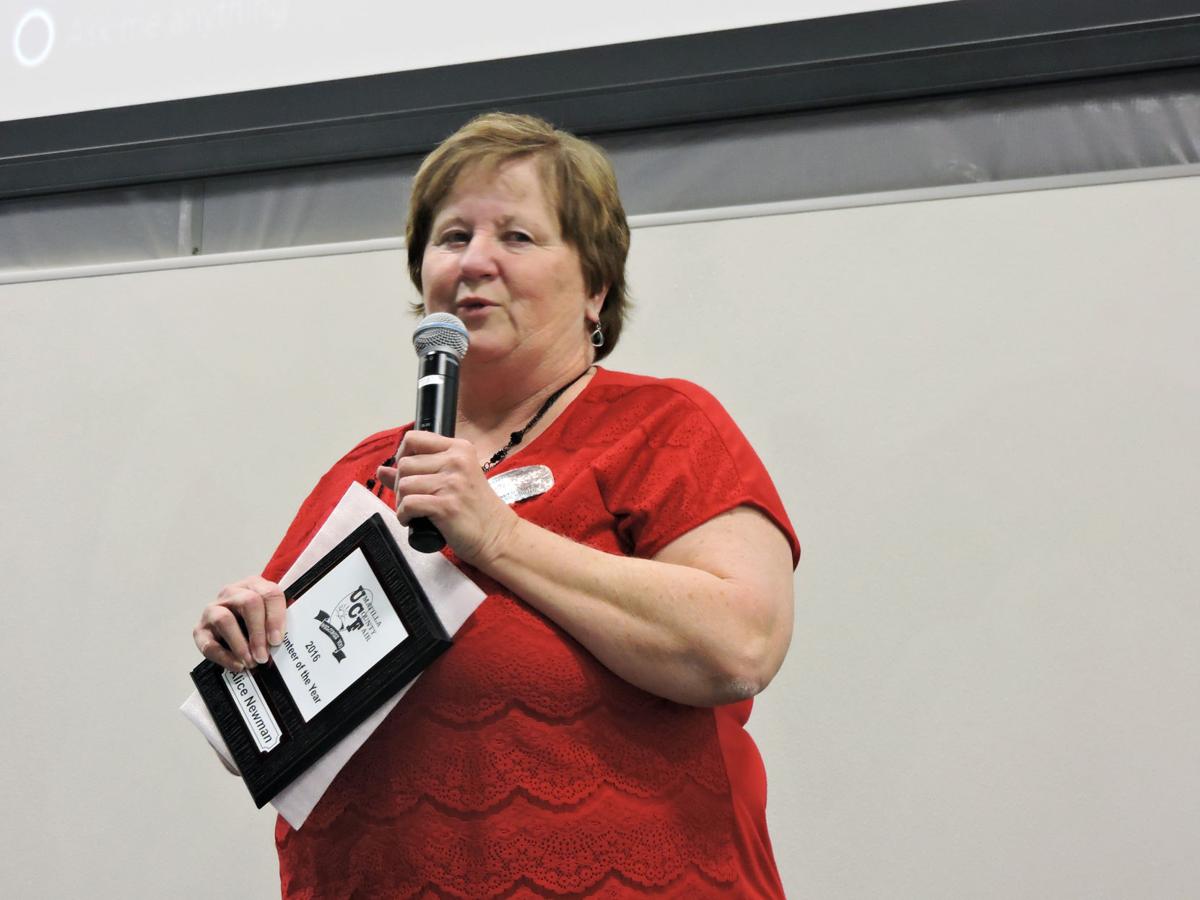 2016 Female Volunteer of the Year Alice Newman thanks the fair board during the 2016 Umatilla County Fair appreciation dinner. 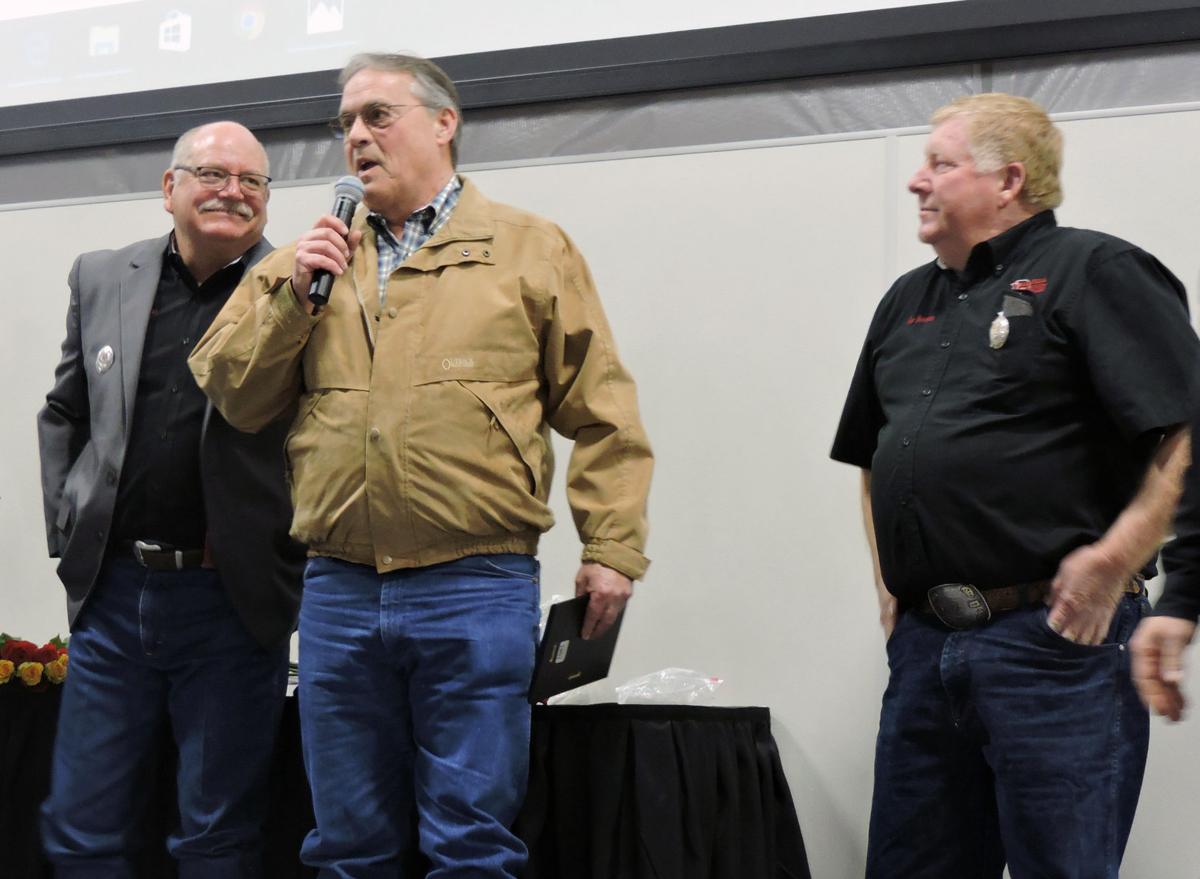 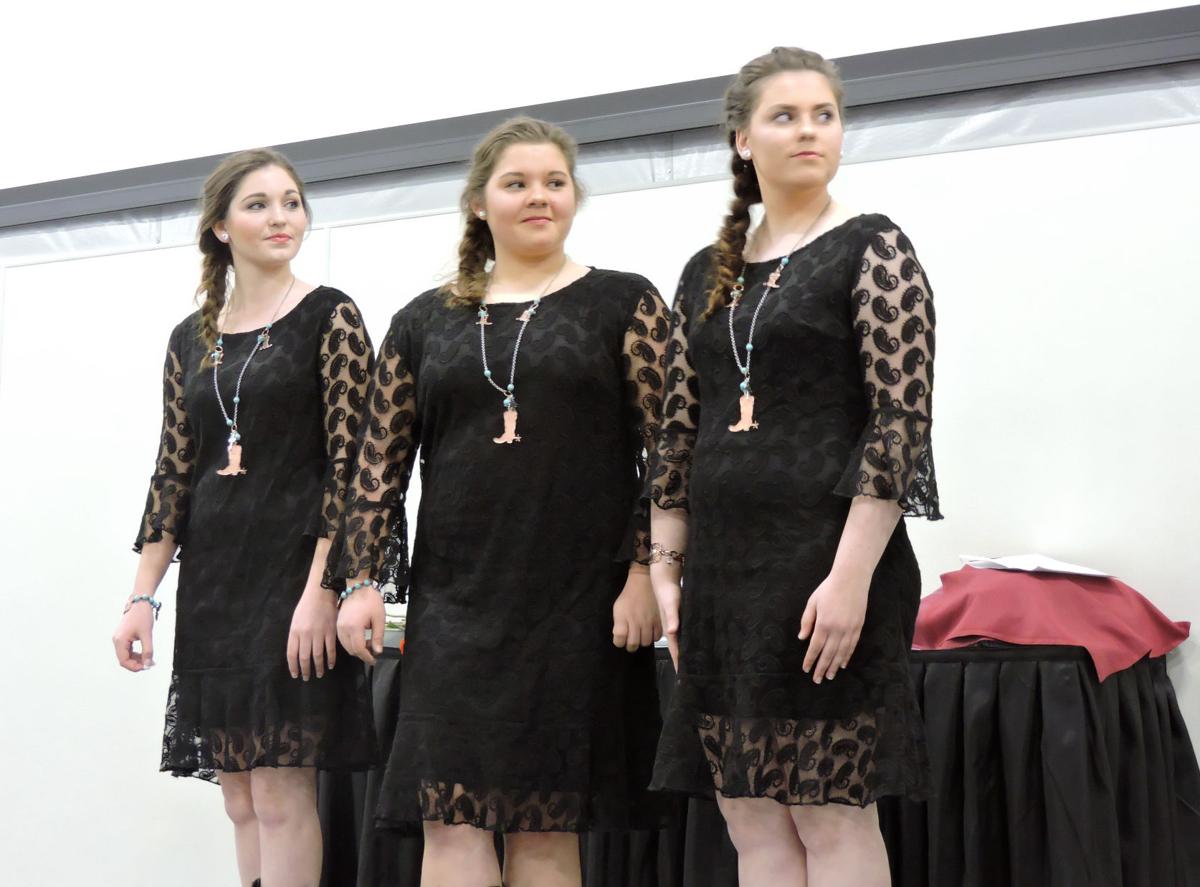 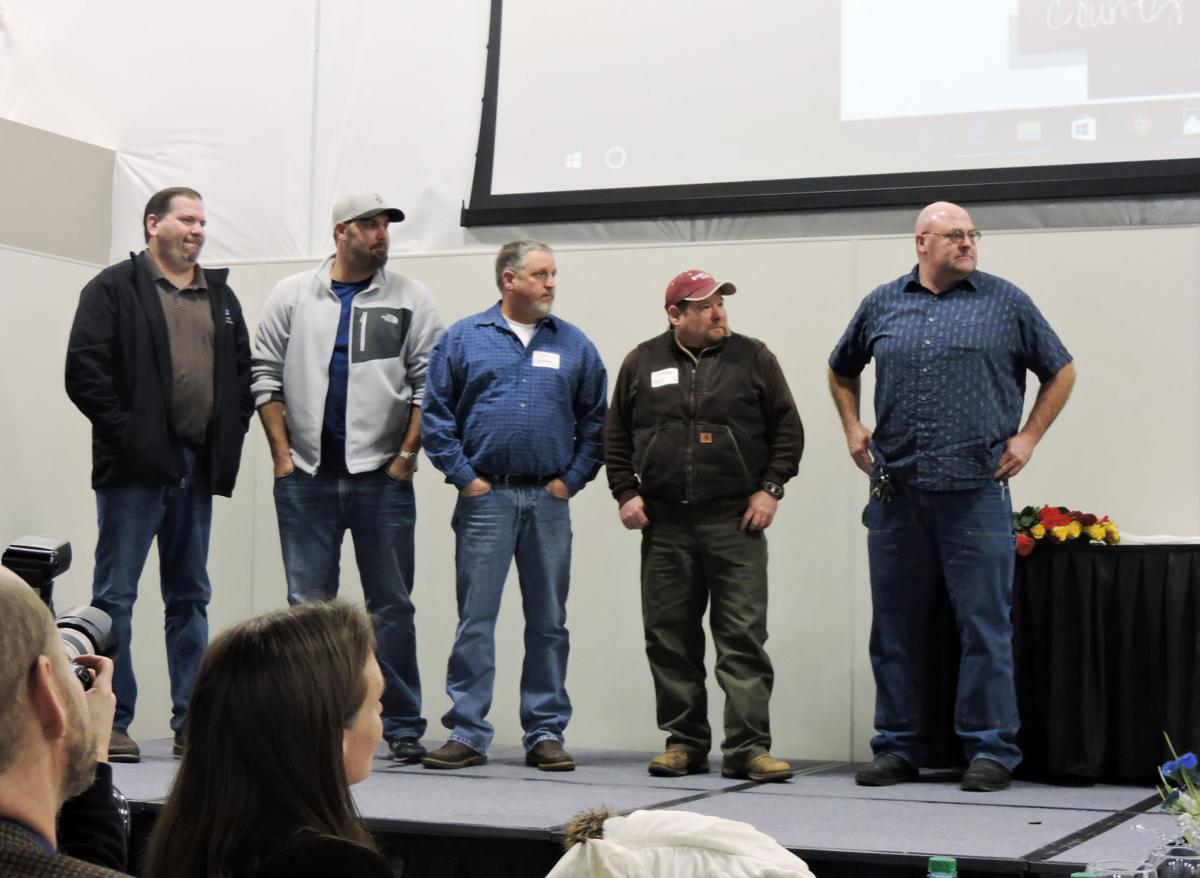 The staff of Shelco Electric were awarded the 2016 Business Partner of the Year during the 2016 Umatilla County Fair appreciation dinner.

2016 Male Volunteer of the Year Warren Smith shows off his award at the 2016 Umatilla County Fair appreciation dinner.

2016 Female Volunteer of the Year Alice Newman thanks the fair board during the 2016 Umatilla County Fair appreciation dinner.

The staff of Shelco Electric were awarded the 2016 Business Partner of the Year during the 2016 Umatilla County Fair appreciation dinner.

The theme of the night — and the 2017 fair — was a nod to preparations for moving the fair and Farm-City Pro Rodeo to their new digs at the Eastern Oregon Trade and Event Center, where the dinner took place.

“This is a whole new ballgame up here,” Umatilla County Fair board member Gay Newman told the audience.

There was a very long list of people to thank throughout the night, and board member Dan Dorran said reminded them that they had the opportunity to make history with “year one” at EOTEC.

“This is the beginning,” he said.

Two important people to thank were the 2016 volunteers of the year. Male volunteer of the year went to Warren Smith, who has done “odds and ends” for the fair since the 1970s, including work on the sound system, the rodeo and building stronger gates for the pigs. Smith had to leave early to participate in the Melonville Comedy Festival, but said before he left that he has made good friends through the fair and enjoyed helping out.

“I think this is an exciting move this year up here,” he said.

Female volunteer of the year was Alice Newman, who has worked through the years on everything from coordinating exhibitors to serving as a chaperon for the Umatilla County Fair Court.

“This individual has a lifelong history and family tradition of supporting youth activities and the Umatilla County Fair,” board member Don Miller said when announcing Newman as the 2016 winner.

“All I can say is I love this fair and love supporting it, so thank you,” Newman responded after receiving her award.

The business partner of the year went to Shelco Electric, after Dorran gave a demonstration with potatoes of how they somehow manage to fit “15 pounds of potatoes in a five pound bag” when it comes to supplying electricity to all of the fair’s needs.

“I’d like to recognize Shelco Electric for carrying the Umatilla County Fair for as long as I’ve been on board — and it hasn’t burnt down!” Dorran said.

The county’s youth sale committee was also recognized by the Oregon State University Extension Center for their work in making each year’s youth livestock auction such a success.

In addition to thanking those that made the 2016 fair possible, the dinner Saturday night was also about passing the baton on to a new group of people ready to be the face of the 2017 fair.

Lou Lyons, owner of Elmer’s Irrigation & Supplies in Hermiston, will be the fair’s 2017 grand marshal. Board member Bob Wolfe said Lyons has been a huge supporter of 4H, FFA and other aspects of the fair, including providing hundreds of tickets for youth to attend the Farm-City Pro Rodeo each year.

“The fact that he embodies giving to youth in the community is an understatement,” Wolfe said.

The board introduced the 2017 Umatilla County Fair Court on Saturday. The court said goodbye to 2016 princess Raylee Lenhert, but 2016 princesses JaNessa Prewitt and Kira Krumbah-Kuhar were joined on the 2017 court by newcomer Karolyn Jones.

Prewitt said she learned on the fair court that “creating friends and memories is what life is all about.” She said she especially appreciated the support of the fair community during 2016, when her family’s house burned down with all of her fair court clothing and accessories inside.

“When I lost my home last June, they jumped right in and I was able to continue to every event,” she said.

Another new face to the 2017 introduced Saturday night was Cyndie Driscoll, who was recently hired as the sponsorship and marketing director for the fair.

“I always think outside the box and color outside the lines, so look forward to new everything,” she said.