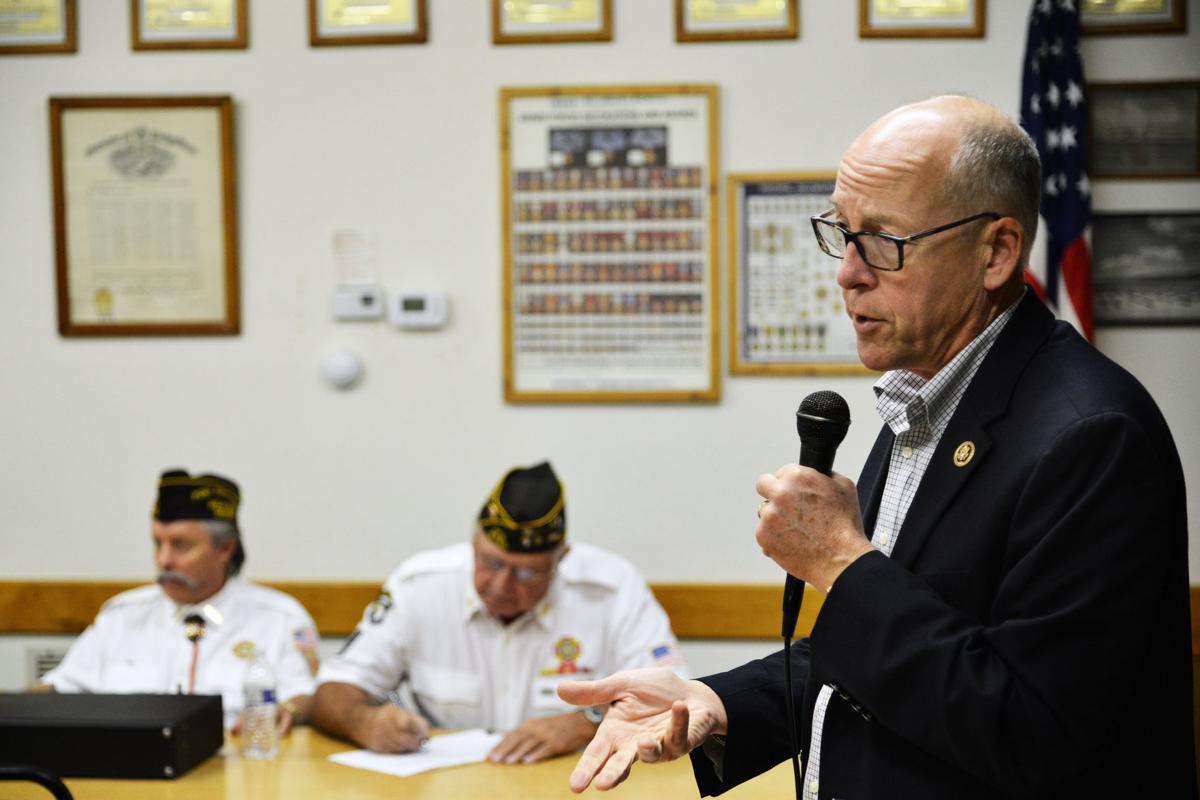 Rep. Greg Walden talks to veterans on Thursday at the VFW post in Hermiston. Walden spoke about the Department of Veterans Affairs and later took questions from the audience. 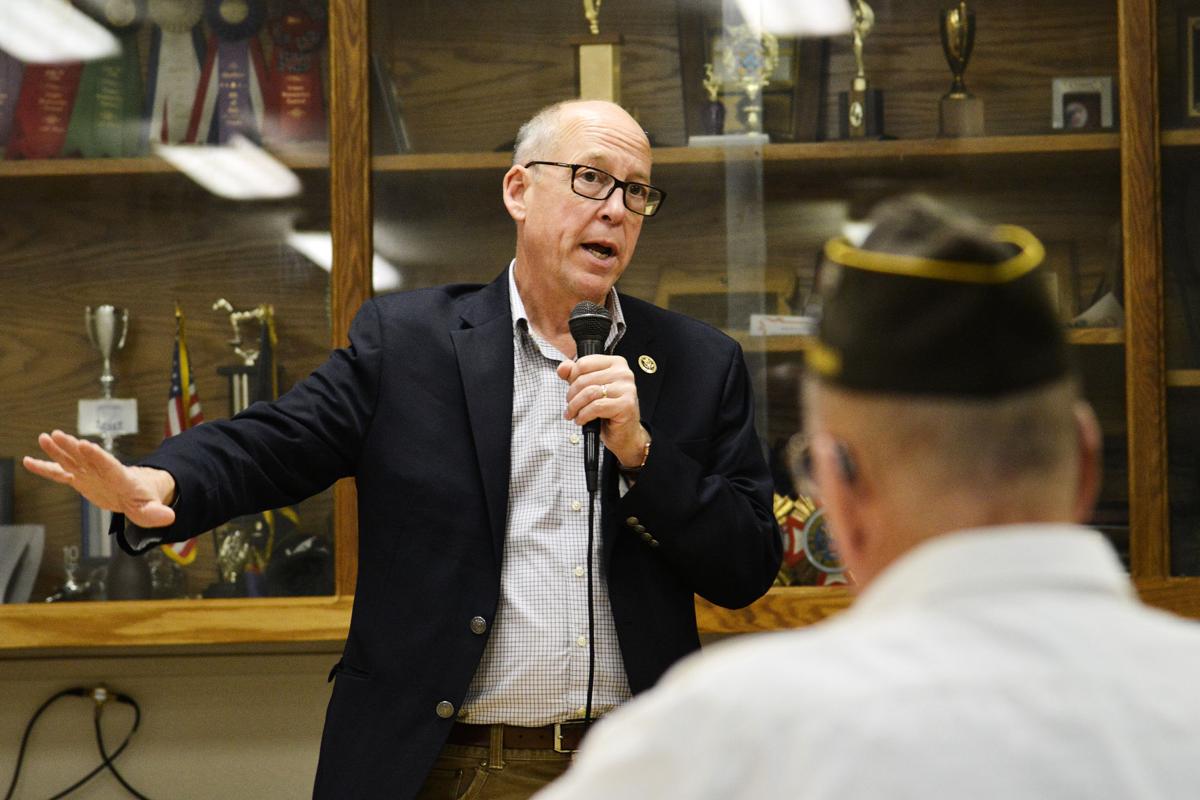 Rep. Greg Walden gestures while speaking to a group of veterans on Thursday at the VFW post in Hermiston.

Rep. Greg Walden talks to veterans on Thursday at the VFW post in Hermiston. Walden spoke about the Department of Veterans Affairs and later took questions from the audience.

Rep. Greg Walden gestures while speaking to a group of veterans on Thursday at the VFW post in Hermiston.

Rep. Greg Walden’s visit to the Hermiston VFW on Thursday stayed focused on veterans’ issues despite an ongoing presidential campaign that has left little room for political discourse on anything else.

Walden shared with veterans in attendance the work that Congress has done to promote their welfare, including the recent passage of an appropriations bill that allocated additional funding for veteran health care and housing in rural areas.

“Additional help is on the way for that,” he said.

After the 2014 controversy caused by revelations that the Department of Veterans Affairs had been covering up the extent of its claims backlog while veterans died waiting for care, Walden said Congress has worked to hold the VA more accountable.

They have begun requiring quarterly reports on the backlog and have improved whistle blower protections for VA employees who come forward about unethical practices. They also banned the practice of giving administrators bonuses despite failing to meet their performance standards, and expanded the Secretary of Veterans Affairs’ power to hire and fire VA employees who are performing poorly.

After veterans in attendance complained that all of that has not seemed to fix the backlog of claims and appeals at the VA, Walden agreed with them that Department of Veterans Affairs administrators should be doing more to fix the VA’s ongoing problems on their own instead of waiting for mandates from Congress.

“We’re not managers, we’re legislators,” Walden said. “We’re supposed to set policy, not do the day to day management.”

He said there are still improvements the legislature is looking to make, however. One complaint he said he has heard from veterans during his tour of the state is that they are merely told when their medical appointments will be with no consideration of their schedule and no negotiation if the time and date conflict with something important like a college final. If the private industry can offer people a choice in scheduling just about anything, Walden said, surely the VA could come up with a system.

“It seems to me we could get a bunch of 12-year-olds and computers and they could do it,” he said.

After the backlog of claims and appeals for medical care at the VA reached a peak, Congress implemented the Veterans Choice Program, which gives some veterans with immediate medical needs a voucher for care elsewhere if the VA can not see them within 30 days. Walden said legislators hope to eventually expand that into a program in which all veterans can get their less serious medical needs met through a list of preferred providers in their hometown.

Attendees at the Thursday meeting said it seemed like there was a pervasive attitude problem with VA bureaucrats that had led to many of the problems the system faces, another assertion Walden did not dispute.

He recounted an experience when a homeless veteran in Bend suffered serious burns from a propane tank explosion on Christmas. Walden contacted the VA after media reports that the man had been at the top of the list since summer for one of the housing vouchers for homeless veterans in central Oregon that had been sitting unused in an office for months. He was told that the rent vouchers hadn’t been distributed yet because it would be inconvenient for a qualified employee from Portland to travel out to Bend and stay in a hotel.

“This is the mentality,” he said.

Veterans also brought up compensation for Agent Orange exposure, noting that some people were exposed to Agent Orange while transporting it at sea or handling it at airfields in Thailand, but only those who were stationed in Vietnam are compensated. Walden said Congress is looking to expand the definition of who qualifies for compensation.

He also noted that there were ways Congress was looking to support veterans outside of the VA. Walden said he hoped that the government could work with employers and colleges to help veterans count certain aspects of their military training toward certifications.

As an example he referenced a young veteran he met recently who, while deployed overseas, regularly drove gasoline tanker trucks on narrow roads along cliffs in a war zone wearing night goggles. But when the man got home he discovered that he would still have to go through the same process as a civilian to qualify for a commercial driver’s license to drive a semi truck in the daylight on Interstate 84.

“It seems we need a better partnership with higher education to recognize what military training is equivalent to,” Walden said.

He thanked the veterans for their service to their country, and for their willingness to meet with him and let him know what is “working and not working on the ground.”