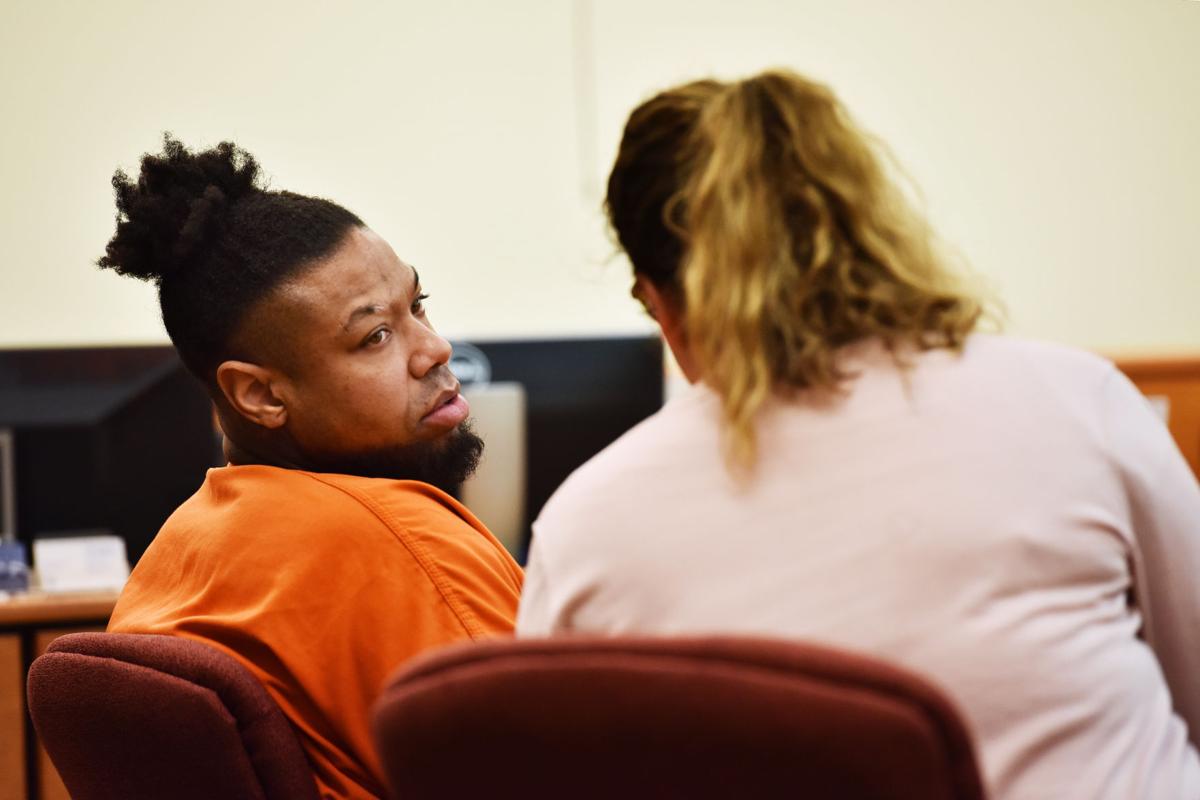 Tyree Houfmuse listens to his defense attorney Kara Davis during a pre-trial hearing on Tuesday at the Stafford Hansell Government Center in Hermiston. 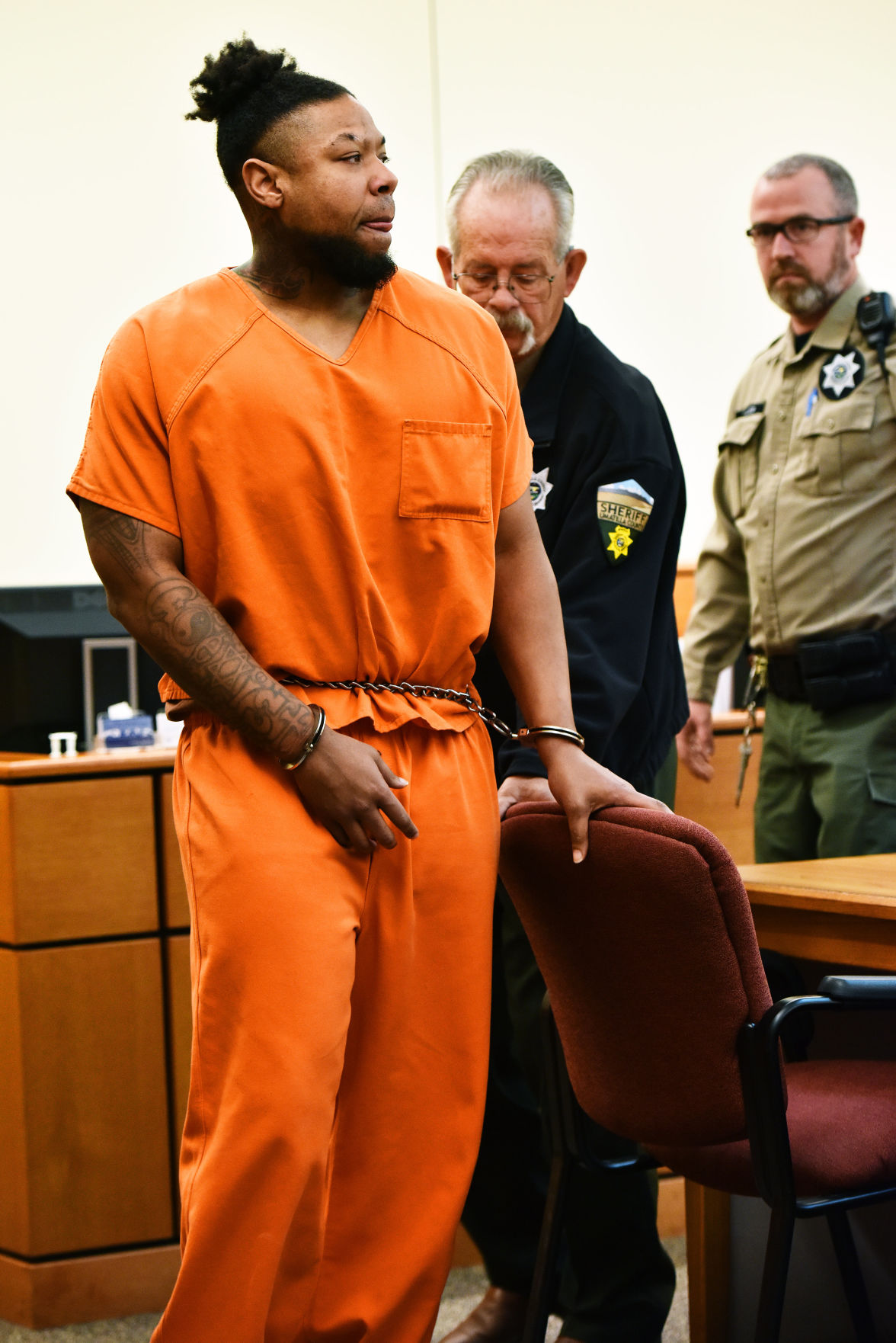 Tyree Houfmuse is led into the courtroom of Umatilla County Circuit Court Judge Eva Temple for a pre-trial hearing Tuesday at the Stafford Hansell Government Center in Hermiston. 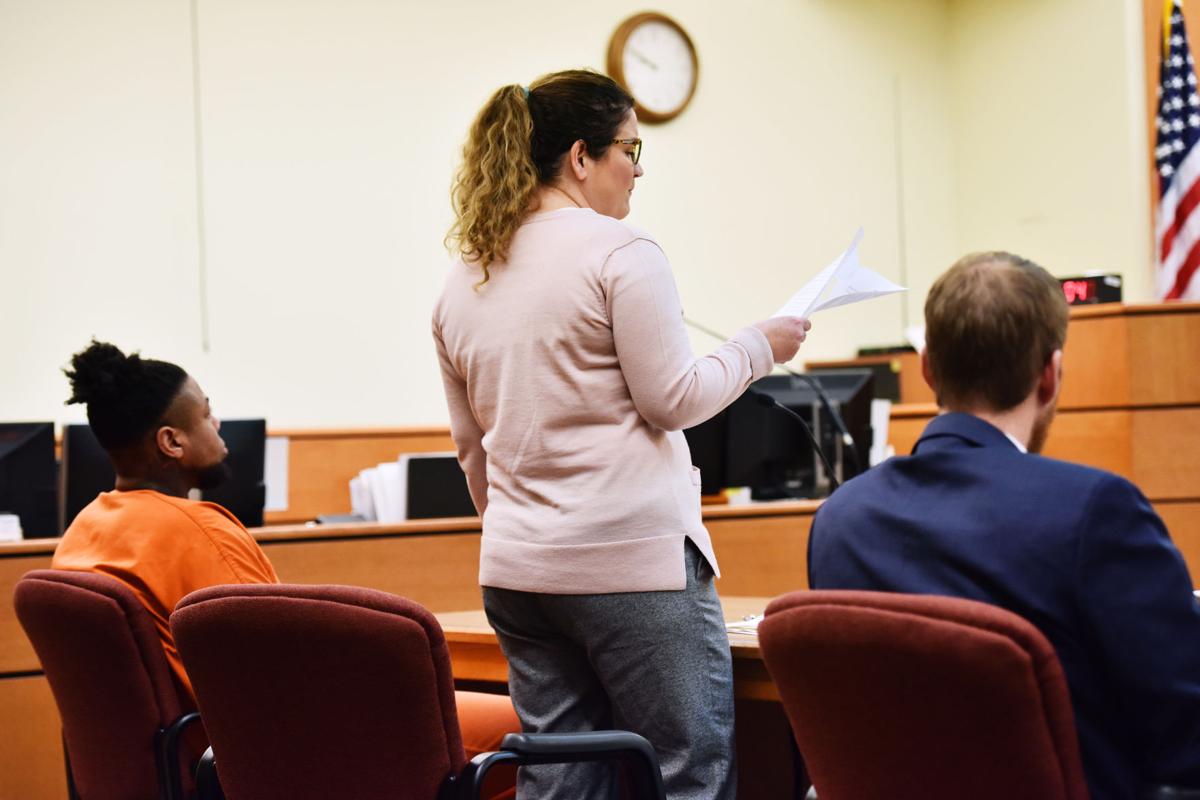 Defense attorney Kara Davis reads from a list of text messages threatening her client, Tyree Houfmuse, on Tuesday during a pre-trial hearing in Hermiston.

Tyree Houfmuse listens to his defense attorney Kara Davis during a pre-trial hearing on Tuesday at the Stafford Hansell Government Center in Hermiston.

Tyree Houfmuse is led into the courtroom of Umatilla County Circuit Court Judge Eva Temple for a pre-trial hearing Tuesday at the Stafford Hansell Government Center in Hermiston.

Defense attorney Kara Davis reads from a list of text messages threatening her client, Tyree Houfmuse, on Tuesday during a pre-trial hearing in Hermiston.

A Hermiston man accused of murder and jailed for nearly a year could be free next month. Attorney Kara Davis claims Tyree Houfmuse was acting in self-defense during a fatal confrontation with a man who threatened to kill him.

Houfmuse, 35, has been in the Umatilla County Jail, Pendleton, since his arrest in June 2017 following the fatal shooting of James Cragun at a Hermiston apartment complex over Memorial Day weekend.

A hearing that began Tuesday is circuit court in Hermiston will continue April 18. Judge Eva Temple will consider releasing Houfmuse, who faces charges of murder, manslaughter, and felon in possession of a firearm.

His trial was originally scheduled for late April, but in February the district attorney’s office requested to postpone until November as prosecutors waited for results from the state crime lab. Davis said if the trial is postponed, Houfmuse will have been in jail for more than a year while presumptively innocent.

Temple allowed both sides to give opening statements Tuesday but said hearing had to conclude another day due to the amount of evidence. Temple said she has to review more than 14 hours of video, audio and written evidence. That includes interviews with witnesses who were with Houfmuse the night of the shooting, Hermiston police as well as Houfmuse himself. She also will review text messages between various parties, including between Cragun and his ex-girlfriend, who was with Houfmuse the night Cragun died.

According to witness accounts from that night, detailed in a search warrant affidavit from Hermiston police, Cragun came to his ex-girlfriend’s apartment and charged toward her. Houfmuse and Cragun fought, the accounts stated, and a gun went off in Cragun’s hand while they were fighting.

Davis said Houfmuse was within his rights because he acted in self-defense.

She cited case law that details what a person is allowed to do if they feel their personal safety is being threatened. If bodily harm is imminent, she said, the person is within their rights to use lethal force against someone threatening them.

“In the videos, we’ll see officers asking repeatedly, ‘Couldn’t he have just fought Mr. Cragun?’ That’s the opposite of what you have to do. You don’t have to try to beat down someone who’s coming at you in the middle of the night.”

She then read text messages from Cragun to his ex-girlfriend, who had been with Houfmuse the night Cragun died. Cragun had been convicted of assaulting the same woman two years ago, and in most cases the East Oregonian does not name domestic violence victims.

Davis said the day after he pleaded guilty, Cragun continued to send his ex-girlfriend texts. Davis read some of the texts, in which Cragun made threats against his own life, as well as against the safety of the woman and anyone she was seeing.

“If there’s another man in your life, either me or him is going to get hurt,” said one of the texts that Davis read. Other texts made direct threats against Houfmuse’s life.

Davis said toxicology reports for Cragun had just come back, and Cragun had methamphetamines in his system.

She said while the state would point out Houfmuse’s demeanor and the placement of the bullet, he was still within his rights.

“If someone says these things to you, and comes after you in this manner, you have the right to defend yourself,” Davis asserted.

District Attorney Dan Primus said he would reserve his argument that proof is evident and presumption strong at the next meeting. In Oregon, if the state can convince a judge there is a strong enough presumption a person is guilty of murder, the judge can order them to stay in jail without bail.

The hearing will resume on April 18.

Several of Cragun’s family members were at the hearing. His sister, Cynthia Bailey, said she hoped the judge would realize only one side of her brother’s actions was being presented.

“As far as the text messages read in court, they’ve only seen one side,” she said. “They haven’t even accessed Jimmy (Cragun)’s phone to see the horrible things that were said to him.”

Bailey said many people were discussing the rights of the defendant.

“What about the rights of the person who can’t defend himself because he was killed?” She asked. “My brother was no saint, but neither was the defendant.”