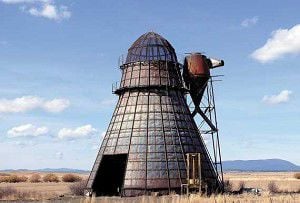 An abandoned wigwam burner is all that remains of the Edward Hines Lumber Company Mill in Seneca. The mill opened in 1939 and closed about 30 years ago. <BR><I>by George Murdock 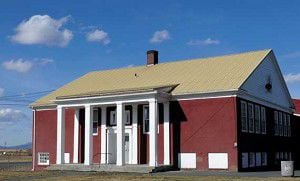 The Seneca School, which is part of the John Day School District, serves 57 children in grades K-8. <BR><I>by George Murdock

An abandoned wigwam burner is all that remains of the Edward Hines Lumber Company Mill in Seneca. The mill opened in 1939 and closed about 30 years ago. <BR><I>by George Murdock

The Seneca School, which is part of the John Day School District, serves 57 children in grades K-8. <BR><I>by George Murdock

When the Edward Hines Lumber Company came to Seneca in 1939, it literally built an entire community from the ground up.

When it sold out about three decades ago, it didn't take away the spirit and pride of the community, but it took with it the primary means of livelihood.

Now, a lonely wigwam burner towers above the horizon, perhaps the last real proof that an expansive lumber mill once buzzed with activity - that and a boarding house for single loggers along Highway 395 and a mill town which is still home to about 200 residents.

In a way, it's like Seneca is somehow waiting for Edward Hines to return.

Some of the residents have found work on surrounding ranches or by driving to Canyon City and John Day.

Others aren't sure where to turn now that a source of livelihood that spanned generations has vanished along with much of Eastern Oregon's timber industry.

Keelie McCormick, who has lived in Seneca for 14 years, works at the Bear Valley Mini Mart. Her husband, Craig, drives the 25 miles to John Day where he works for the Malheur Lumber Company.

Keelie came to Seneca with her mother. They had previously lived in Burns.

When Edward Hines built the mill and the community surrounding it, he included a large facility for the bachelor loggers. The imposing structure stands on the west side of Highway 395 across the street from the Seneca School.

Although it has always had the appearance of being a hotel, it has never catered to paying customers.

The BearCat Lodge in Seneca once housed bachelor loggers who worked for the Edward Hines Lumber Company. It eventually fell into disrepair but is now undergoing a major renovation. Staff photo by George Murdock

In recent years, the 20,000 square foot structure began to suffer the consequences of neglect. But that was before it was purchased by J.W. Everitt, an accomplished musician, and his wife, Carol Chaffee.

Together, they have poured $2 million into a facility which they now call the BearCat Lodge. A work in progress, which is first class at every step of the way, the BearCat Lodge will still retain its reputation as a private source of accommodations.

In the words of Everitt, "we don't want the hassles of trying to maintain a public facility, we want something that is open to our friends."

Most recently from Tygh Valley, the Everitts arrived in town two years ago. While their project is going full tilt and while the BearCat Lodge is being restored to its former state and well beyond, in some ways it is like they are on one side of Highway 395 and the other residents of Seneca are on the other.

It certainly isn't that J.W. and Carol are keeping things quiet. We simply stopped to admire their two bobcats housed outside and were invited inside for a complete tour.

Carol is a graduate of Gonzaga Law School with experience in the Nevada Supreme Court, the Idaho Attorney General's Office, and the Washington Court of Appeals.

J.W.'s father was a member of the Sons of the Pioneers.

Although J.W. is a bit surprised at the fact that most of the folks in Seneca haven't reached out to the newcomers, he loves the area, its potential, and has nothing but praise for the Seneca Elementary School which educates the town's children.

"Adele Cerny, the head teacher, and her staff do an incredible job of providing a quality experience for the young people in this community," J.W. said.

The school, which now serves 57 students, was created in the 1930s to serve the families of the Hines Logging empire. Prior to that, the children of ranching families in the area attended one-room schools at Izee, Silvies, and Bear Valley.

It's clear that the parents of Seneca also have a great deal of pride in their isolated mountain retreat which, at 4,690 feet in elevation, is sometimes the coldest spot in Oregon.

There is a first class baseball facility, a convenient restroom stop for passersby, and even a golf course as well as picnic facilities including BBQ's.

On a Sunday afternoon, golf carts plied the fields which once surrounded the lumber mill.

Now the main source of activity is the school where Cerny, who came in 1980, has served two generations. One of her former students, Andrea Combs, is now teaching the 7th and 8th graders.

Edward Hines is long gone and so are many of the timber jobs that the community would love to see return. But the history of that dramatic era has been preserved by the students at Seneca Elementary who have already compiled a volume containing 19 interviews with local residents who remember the three decades that are still considered the high point in the history of Bear Valley.

Several years ago the Oregon School Boards Association honored the school for its history project which includes a timeline that extends 70 feet down the main hallway of the school.

Cerny said they have one more interview planned this spring before they are able to publish volume two of their history project.

A side benefit of this ambitious undertaking has been the way it has expanded the outlook of the students, according to Cerny.

"As the children became aware of the past and what it was like," she said, "they were able to contrast that with the present. And now they have even developed a greater appreciation for what could be in terms of the future."