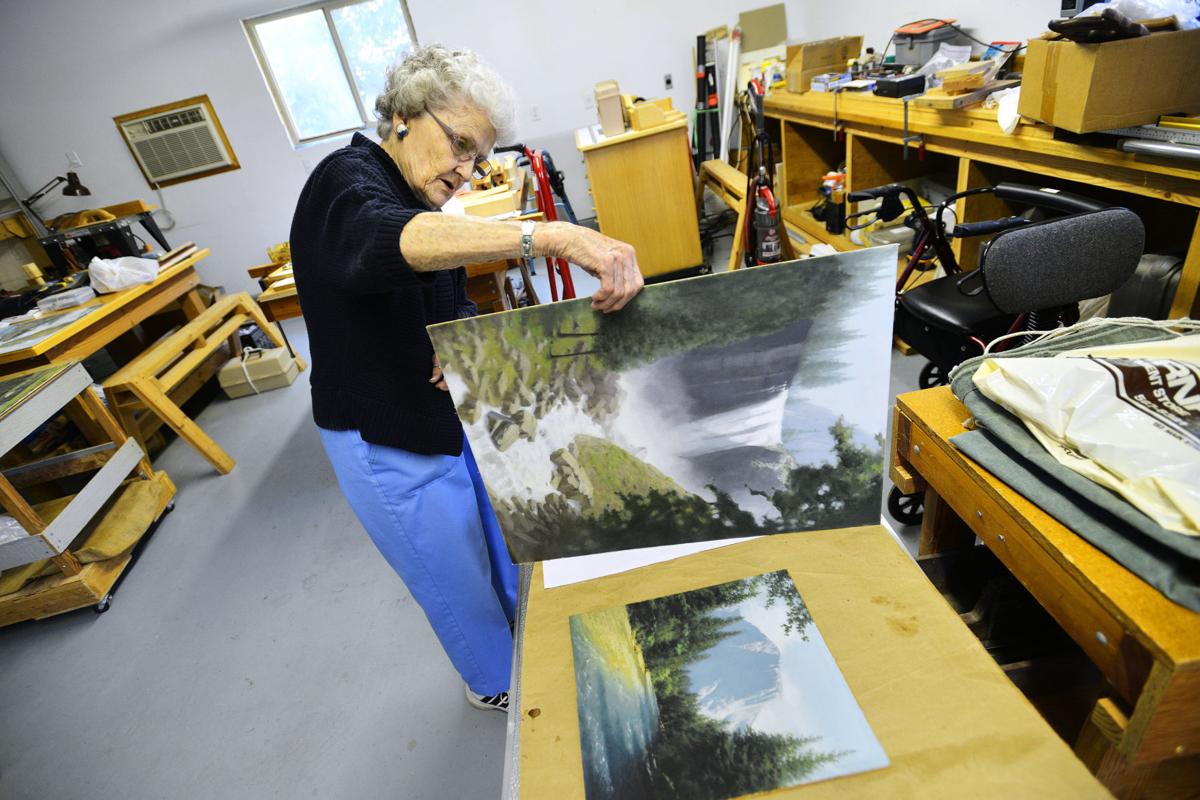 Ellen Brown, sister-in-law of Dolores Jean Brown Pinney, looks at the back of one of her favorite paintings Pinney painted for a date in her shop at her Hermiston home. Brown set aside numerous of her sister-in-law's paintings to give to family members. 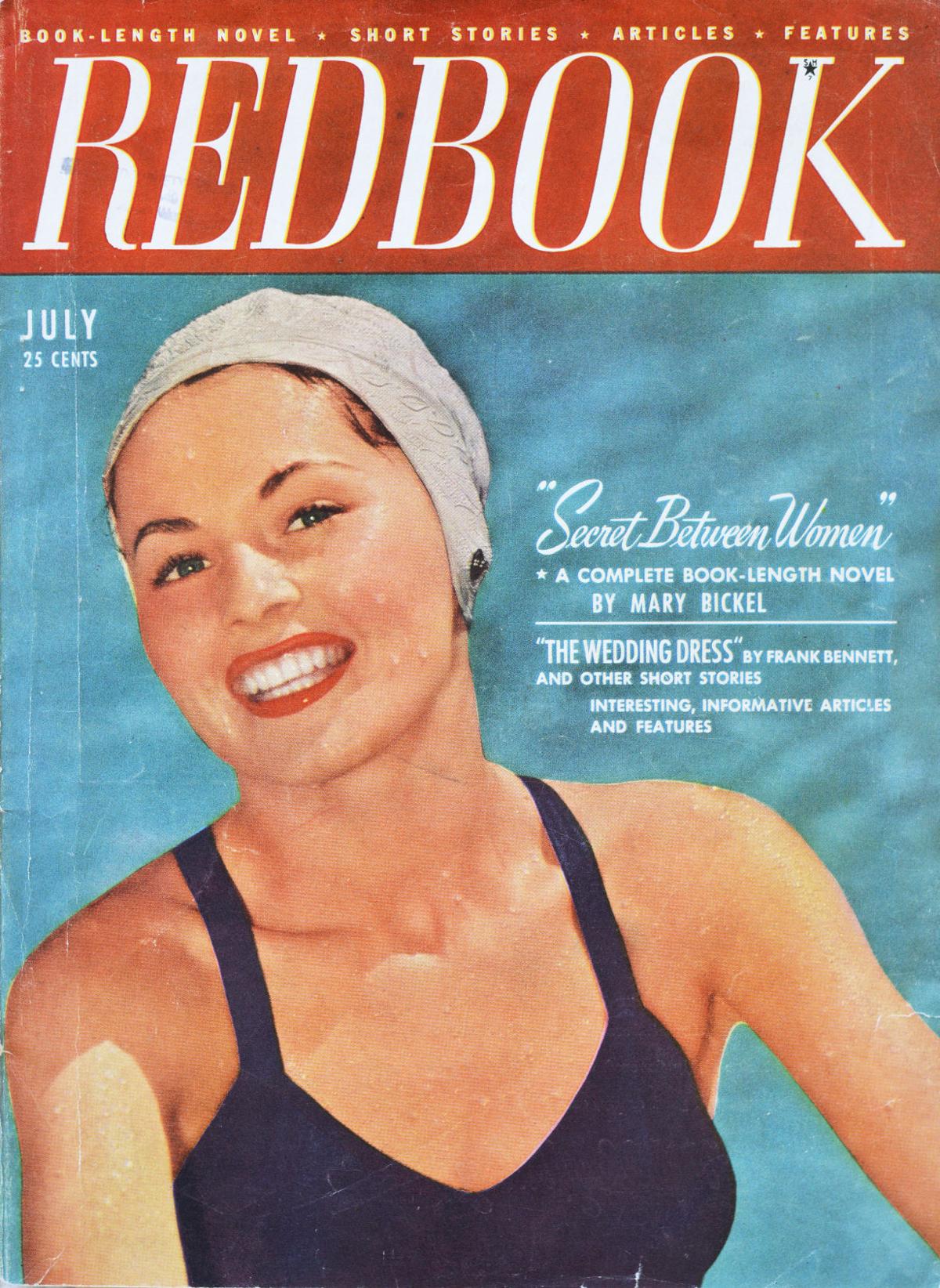 Dolores Jean Brown Pinney was a model in the 40s and 50s in Los Angeles and New York. Here she is on the cover of the July 1948 cover of Redbook Magazine. 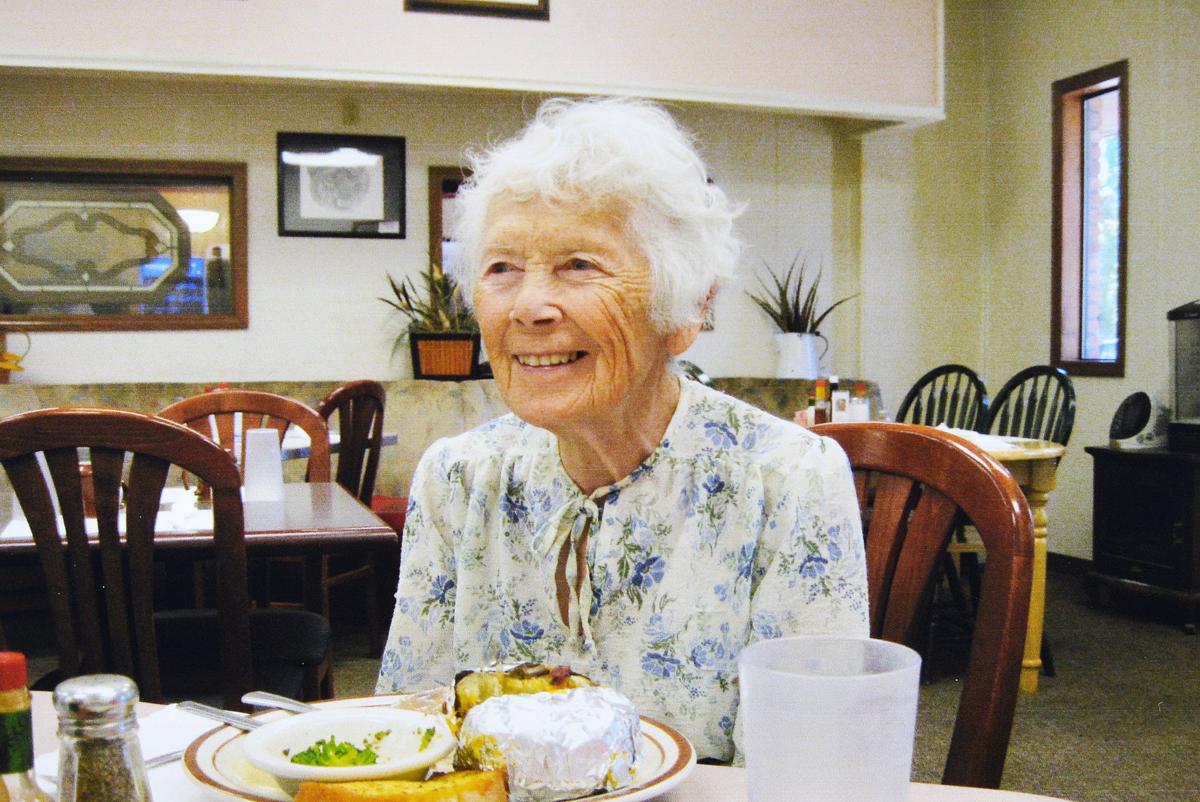 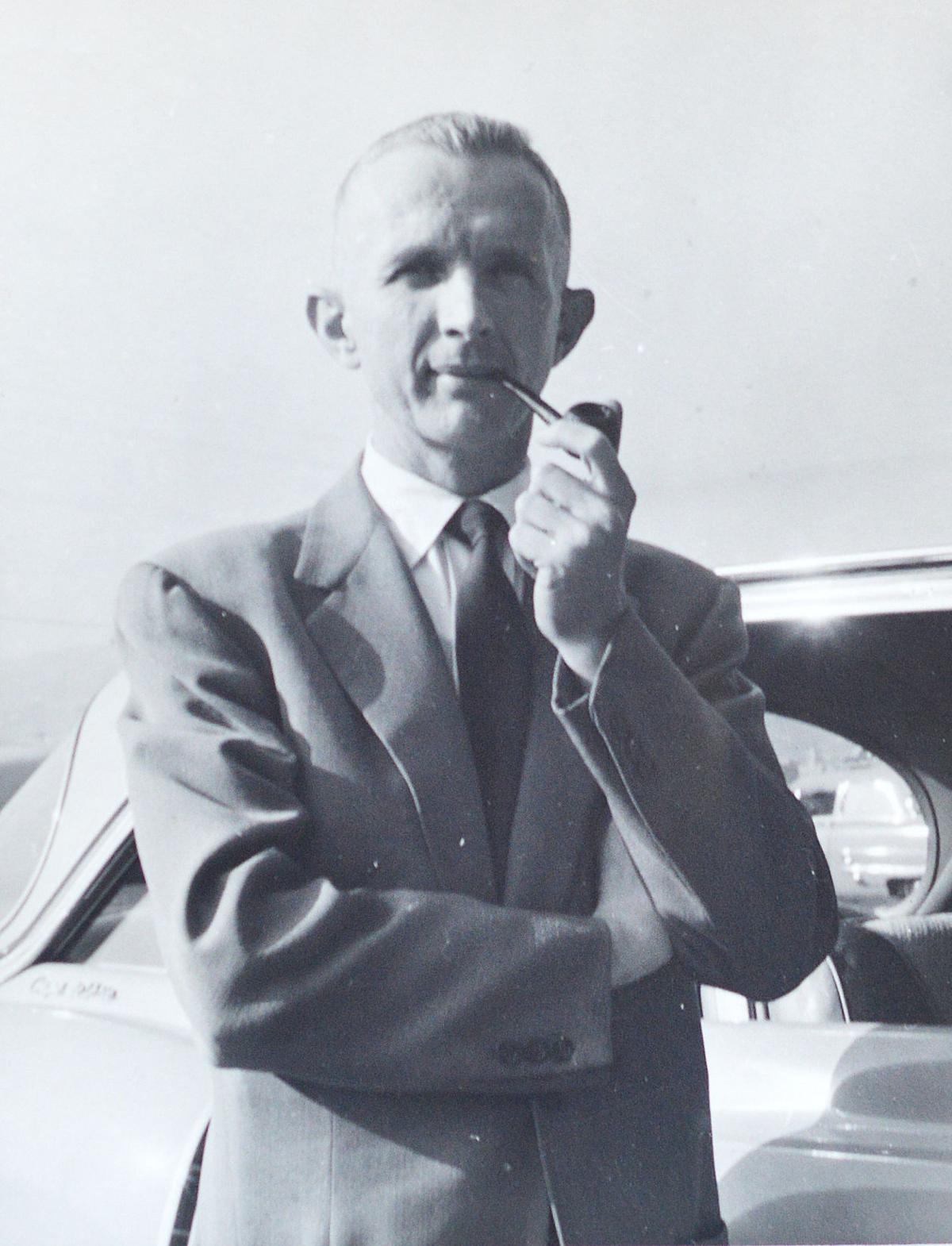 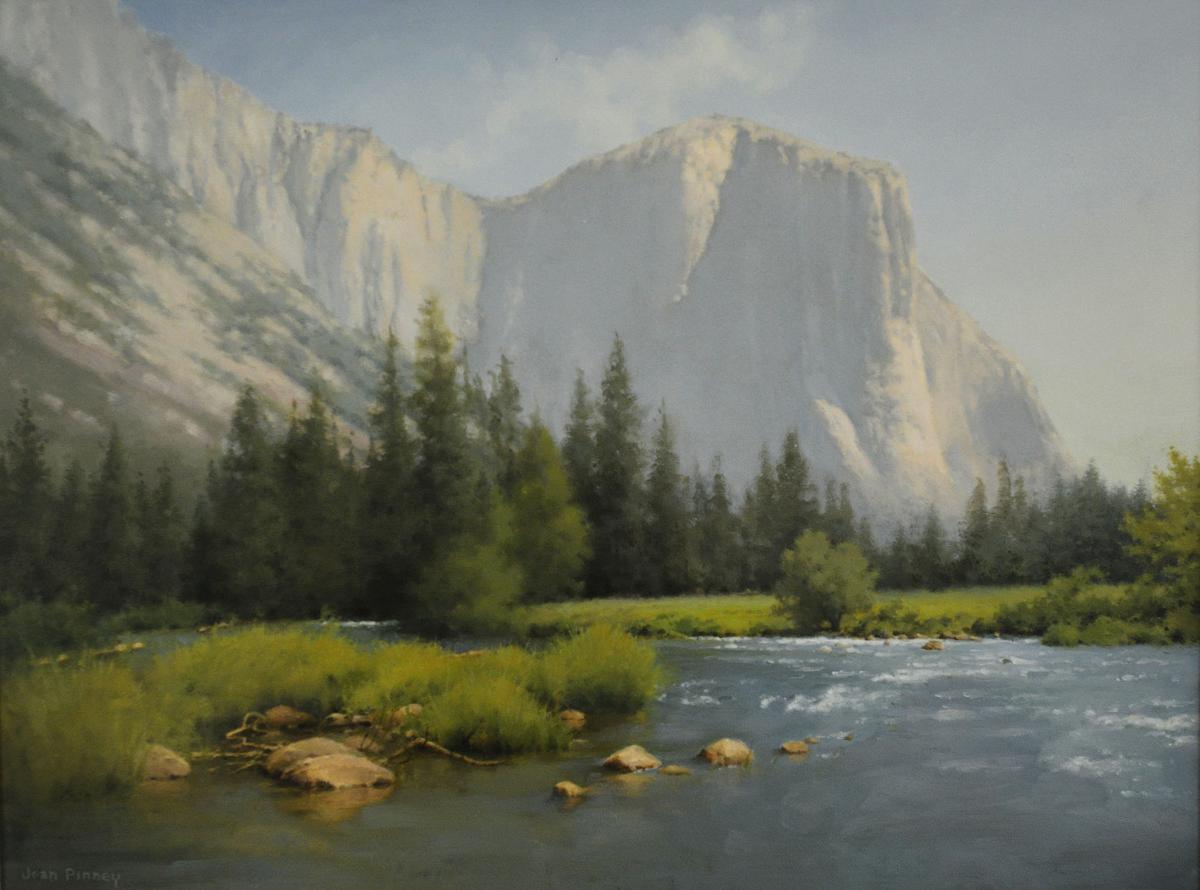 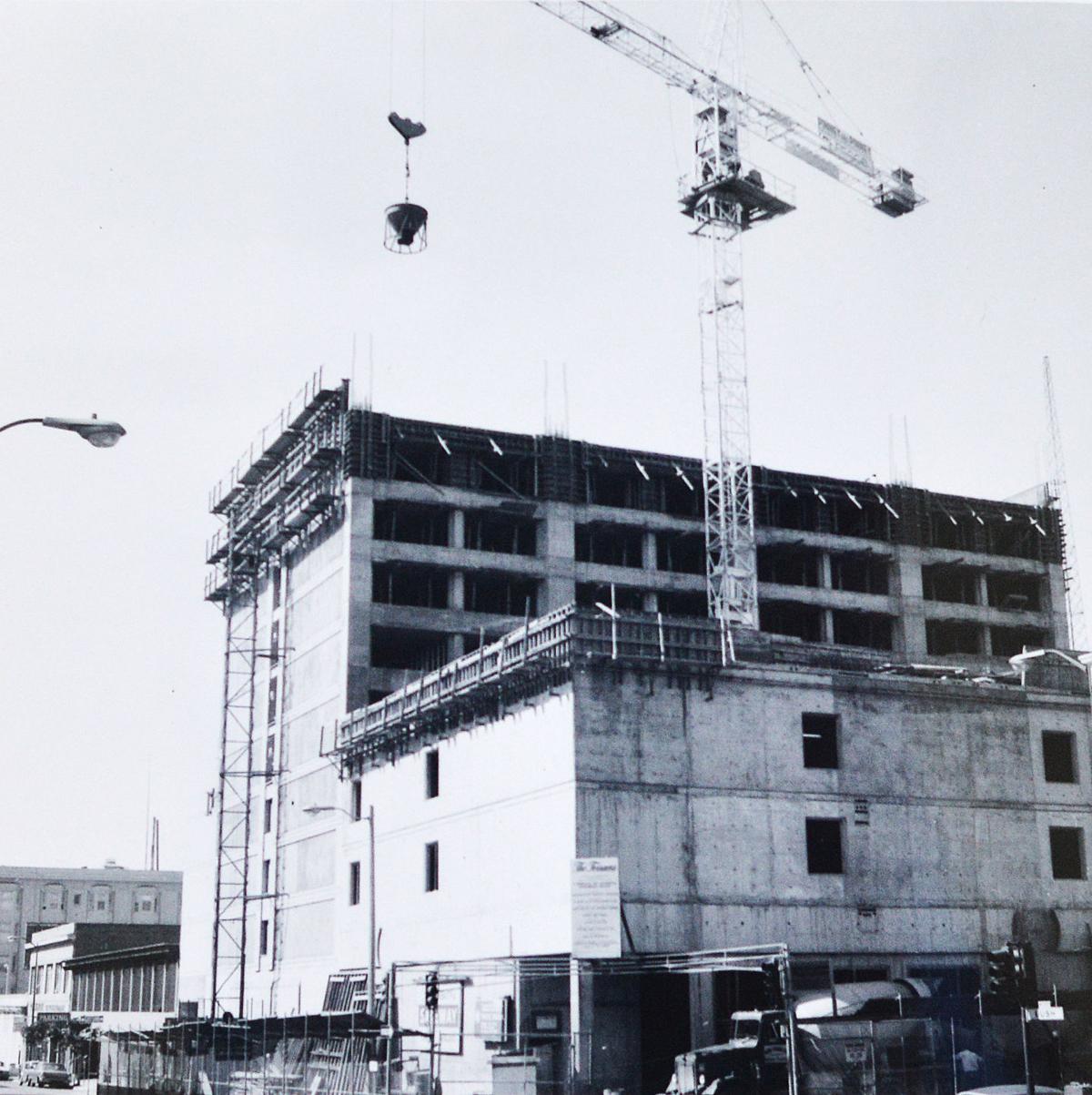 A construction photo of a project that Dolores Jean Brown Pinney and her husband, architect Bob Pinney, collaborated on in San Francisco in 1974. 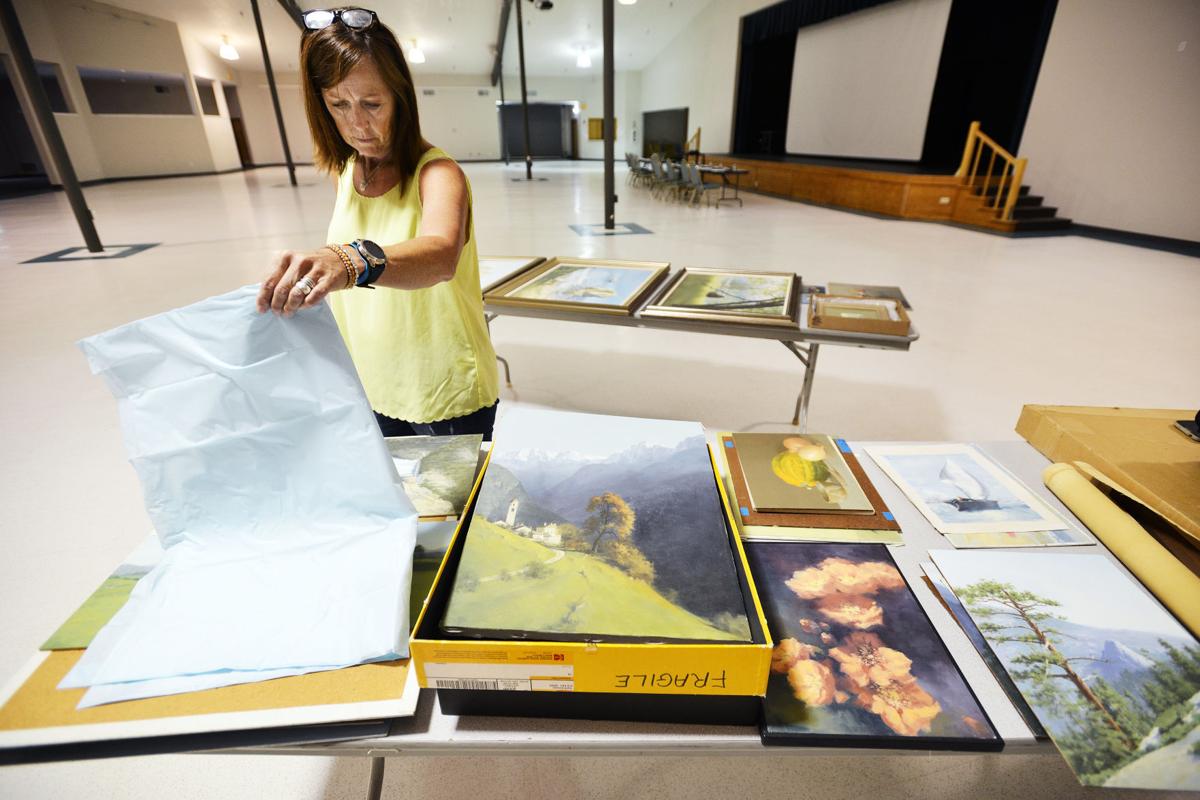 Kari Christiansen of Hermiston looks through paintings by Dolores Jean Brown Pinney that will be in an estate sale later this month at the Hermiston Conference Center. 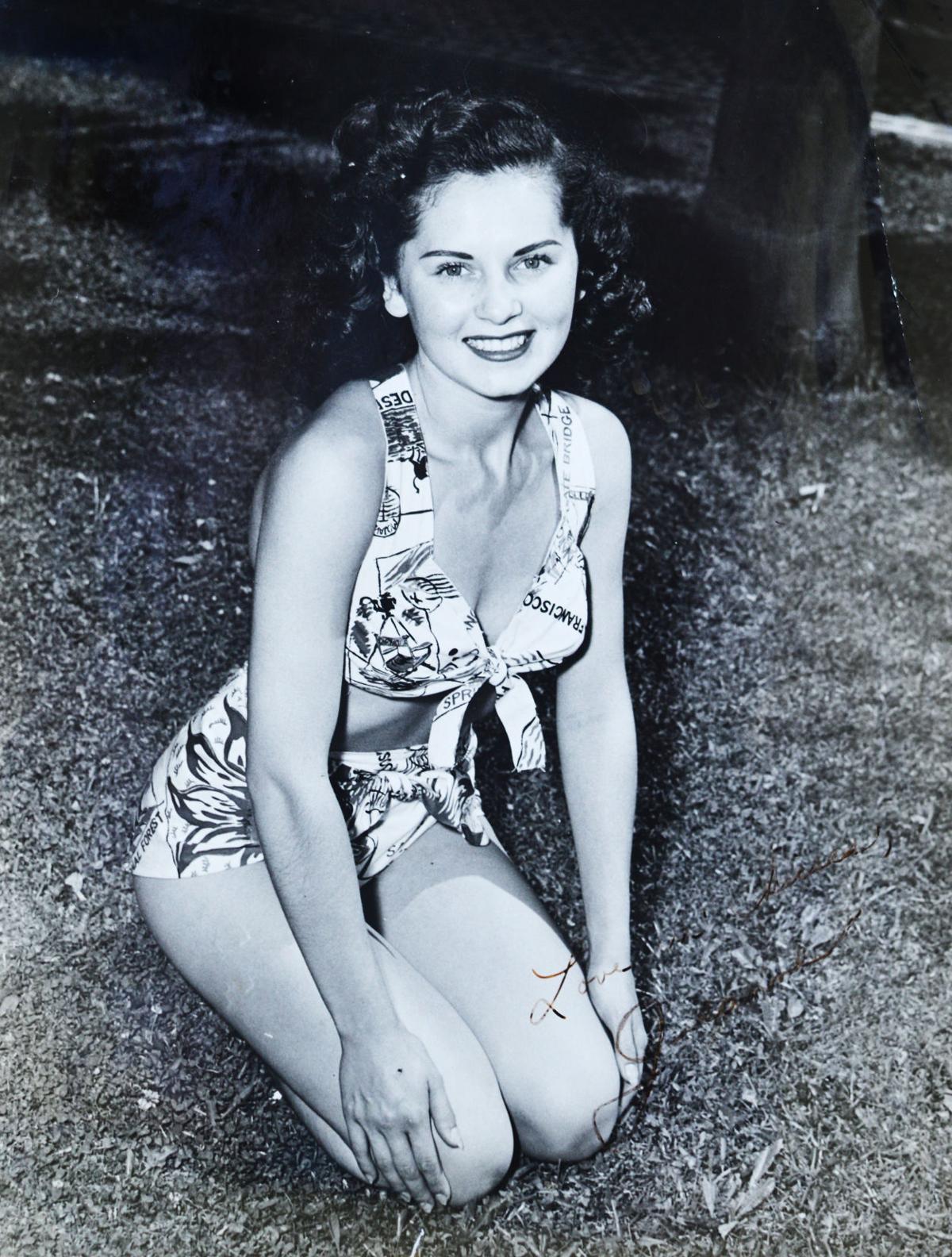 Ellen Brown, sister-in-law of Dolores Jean Brown Pinney, looks at the back of one of her favorite paintings Pinney painted for a date in her shop at her Hermiston home. Brown set aside numerous of her sister-in-law's paintings to give to family members.

Dolores Jean Brown Pinney was a model in the 40s and 50s in Los Angeles and New York. Here she is on the cover of the July 1948 cover of Redbook Magazine.

A construction photo of a project that Dolores Jean Brown Pinney and her husband, architect Bob Pinney, collaborated on in San Francisco in 1974.

Kari Christiansen of Hermiston looks through paintings by Dolores Jean Brown Pinney that will be in an estate sale later this month at the Hermiston Conference Center.

One of the last photos taken of Dolores Jean Brown Pinney shows the 90-year-old woman with a halo of white hair, looking into the distance and smiling.

If you pick up an old fashion magazine, you might see that same smile.

Pinney, who went by her middle name, “Jean,” was no stranger to being photographed. In the 1940s, she was a cover model for magazines such as Redbook, Pageant, Salute and Look. A spread in Life Magazine was one of her first national breaks, which started a short, prolific career in the spotlight.

Pinney passed away on February 15, a few months before her 91st birthday, but her family members are still reminiscing about her life.

The rise from a small, rural upbringing to the pages of national magazines was a short, somewhat unexpected path for the Irrigon High School graduate.

Pinney spent her youth entering beauty contests locally, such as “Miss Umatilla Ordnance Depot” in 1943 — her first contest. After graduating from Irrigon High School in 1944, she studied for a year at Eastern Oregon College.

“She was a top student in art,” said her sister-in-law Ellen Brown.

After a year in La Grande Pinney moved to Los Angeles, where her great-aunt lived, and began working as a model there. She won the “Miss Hollywood” contest in 1947, at the age of 21. She soon moved to New York and signed with the John Robert Powers modeling agency, after which she was featured in several magazines.

Pinney saved most of the articles and mementos from her modeling career and Ellen Brown pores over them, remembering her sister-in-law.

Ellen has fond memories of Pinney from their shared youth, as well.

“She was two years ahead of me in school,” Ellen said. “Her family lived about a quarter-mile away. I moved here at the end of the school year, and Jean asked me to ride the family bikes with her uptown. She said, ‘I’ll introduce you to all the students.’ I thought, how nice of her to be so neighborly.”

Born in Weed, California, in June of 1926, Pinney’s early life was a bit of a vagabond existence.

“They traveled around picking crops during the Great Depression,” said her nephew, Daryl Brown. “Oregon, Washington, Montana. From first grade through high school, they attended 13 different schools in different cities — not including repeats.”

Meticulously preserved newspaper clippings about Pinney from her modeling days reveal a range of interests and capabilities. She visited the Grand Coulee Dam in 1950 and the Spokesman-Review newspaper published an interview with her. Pinney said she enjoyed the outdoors, regularly went fishing and swimming, and continued to pursue her art aspirations. Another interview said she was studying drama as well, and was being “groomed” by Sam Goldwyn. In Pinney’s box of mementos, she saved scripts from one-act plays and programs from concerts she attended in New York, as well as invitations and scholarship applications from her time as a student at Eastern Oregon College. There are also telegrams that show correspondence with her family members, including her time living on her own before she got married. One, a money order from her father, simply says, “Hope this reaches you before they throw you out. Love, Dad.”

Pinney’s talents extended beyond modeling. In a Dec. 28, 1948, newspaper interview she called art her “first love” — which Pinney retained all her life. Following her career as a model, she continued to paint. Her primary mediums were acrylics and oils and her subject matter varied, from landscapes of mountains and oceans to vases and bowls of fruit.

“She was best known for her still lifes,” said Hermiston business owner Ford Bonney who, along with Mike Zook, is putting together an estate sale of Pinney’s artwork and belongings, through Zook’s company MBZ Liquidations. According to Bonney, paintings by Pinney were featured in galleries in San Francisco and Jackson Hole, Wyoming.

There are also several portraits for sale, most of which were painted by Pinney’s husband.

As with many other skills Pinney developed, she took it on herself.

“Irrigon didn’t have art classes. She did art lessons by mail,” Ellen said. “That was the only time I knew her to get art training. Her mom told me that from the time she was little, she could draw portraits of people. She had a lot of natural ability.”

When she met her husband, Bob, Pinney’s life changed again. The two met when he was working for Libby Owens-Ford in Los Angeles, and she was a working model. They married in 1951 and Pinney ended her modeling career soon after. Bob was an architect, and his wife soon began studying the subject and applying her skills.

“I think she would have modeled longer,” Ellen said, “but he didn’t particularly want her modeling anymore, and she was into learning about architecture.”

The couple eventually moved to San Francisco, and Pinney began doing architectural renderings of buildings that her husband was working on. Ellen still has some pictures of buildings Pinney and her husband worked on, with Pinney’s notes about the structure on the back. They designed several buildings in the city, including a Safeway grocery store with some apartment buildings above it.

“She didn’t have an architectural degree, but she got right into it,” Ellen said. “She was so talented. Whatever she took upon herself.”

That self-taught ability extended to sewing and even woodworking, according to Daryl.

“When she was living in San Francisco, rather than buy furniture, she just decided she would make her own,” Daryl said. “For her, it was probably no different than making clothes.”

After Pinney’s husband passed away in 1996, she moved back to the Hermiston area to be near her brother.

Around the same time, she began having some health issues, including memory loss and cataracts. Toward the end of her life, her sister-in-law recalls Pinney spending a lot of time in the garden, but almost none with a brush and canvas.

“She wasn’t doing the work she used to do,” Ellen said.

“We’re kind of fascinated with her,” Daryl said. “Going from Irrigon to LA and New York — after her husband passed away, she moved back closer to family. She was doing a lot of things. It was not your average person’s life.”

The estate sale featuring many of Pinney’s creations, including her artwork and furniture, is July 30 at 1 p.m. The sale will be at the Hermiston Conference Center, 415 S. Highway 395, Hermiston.