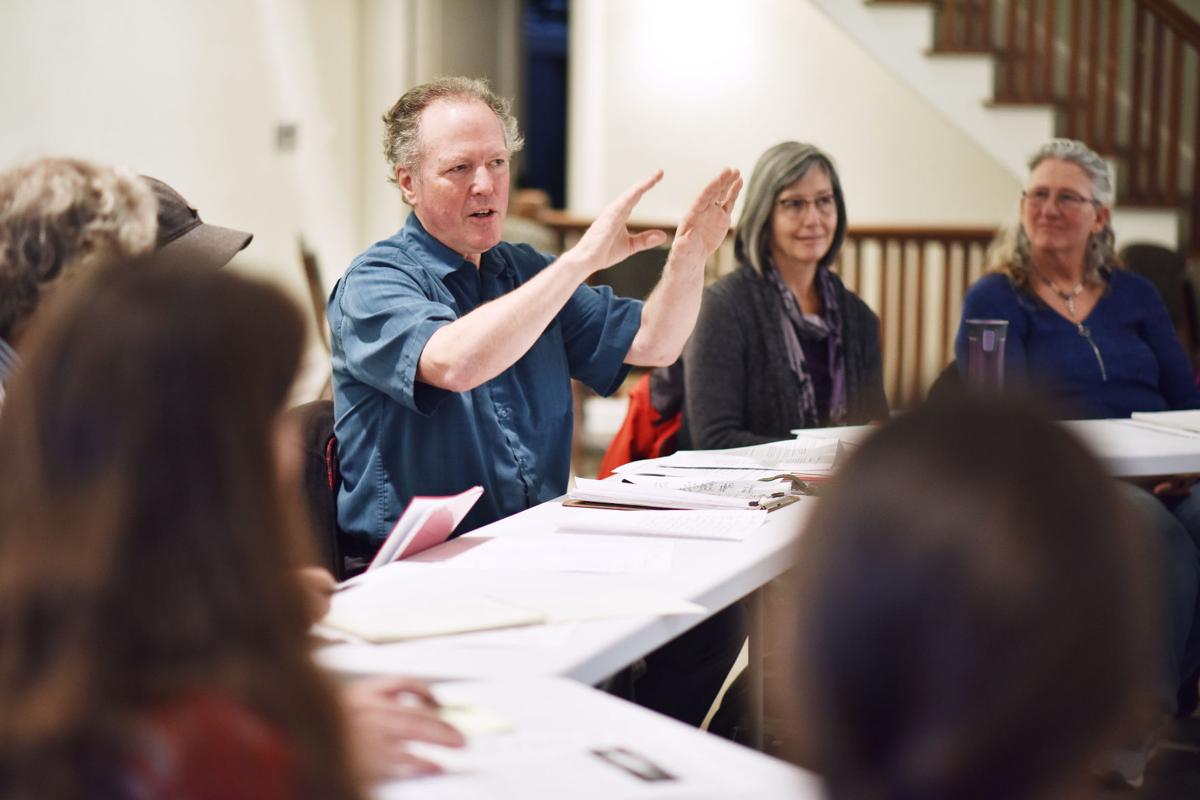 Staff photo by E.J. Harris Oregon Poet Laureate Kim Stafford gestures while talking about a saying his father, former Oregon Poet Laureate William Stafford, used to say about the dangers of setting a high bar for excellence in your writing during a workshop on Friday at the Pendleton Center for the Arts. Stafford has been making the rounds in Eastern Oregon this week promoting writing and poetry. 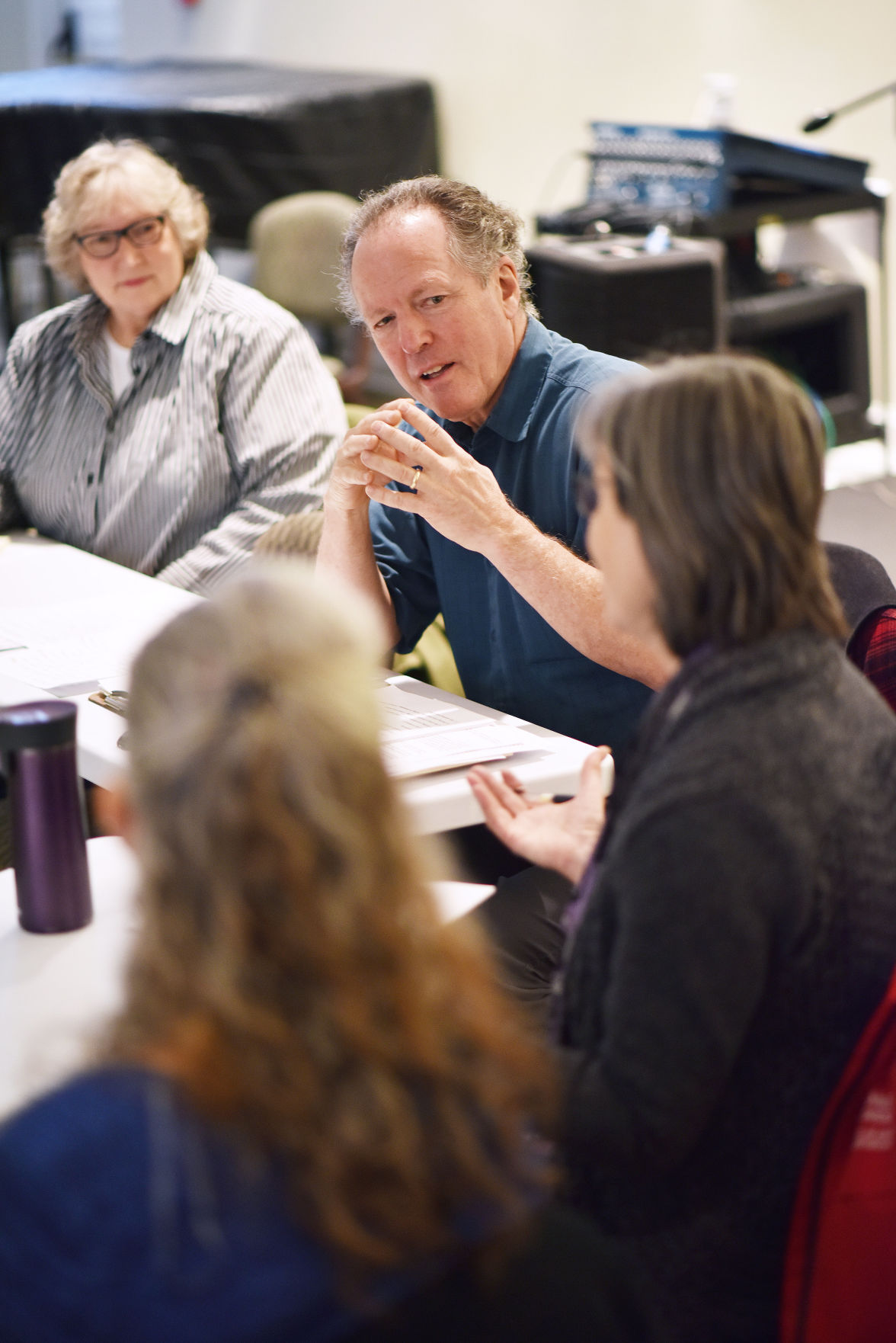 Staff photo by E.J. Harris Oregon Poet Laureate Kim Stafford listens to introductions for participants in a writing workshop on Friday at the Pendleton Center for the Arts.

Staff photo by E.J. Harris Oregon Poet Laureate Kim Stafford gestures while talking about a saying his father, former Oregon Poet Laureate William Stafford, used to say about the dangers of setting a high bar for excellence in your writing during a workshop on Friday at the Pendleton Center for the Arts. Stafford has been making the rounds in Eastern Oregon this week promoting writing and poetry.

Staff photo by E.J. Harris Oregon Poet Laureate Kim Stafford listens to introductions for participants in a writing workshop on Friday at the Pendleton Center for the Arts.

They filled the Pendleton Center for the Arts, eager for Oregon’s poet laureate, Kim Stafford. He recited and read his work, amused the crowd with stories, dropped wisdom from Aristotle and Tom Waits, even knocked out a country tune on guitar.

But Stafford, ever the teacher, also gave the dozens there an assignment, one of his favorites: write a poem for someone who needs a poem.

He talked about that writing prompt earlier in the day after directing a poetry workshop at the Pendleton campus of Blue Mountain Community College. Those kinds of poems, he said, are not great poems, they do not end up in text books.

Stafford, 69, has written numerous books of poetry and prose, is the founding director of The Northwest Writing Institute at Lewis & Clark College and one of the founders of Fishtrap, the literary nonprofit in Wallowa County. His father, William Stafford, was Oregon’s poet laureate 1975-90. Gov. Kate Brown in May appointed Kim Stafford as Oregon’s ninth poet laureate. The program requires him to give at least 20 public readings across the state. Thursday night’s was his 55th.

“I think a lot of Americans — not just college students — see poetry as some sort of complicated, abstract art that isn’t meant for them,” Beers said. “The more poets can visit rural places and give free workshops and readings meant for everyone, the more we can do away with this view that poetry isn’t for everyone.”

Beers said she and her students read Stafford’s work in anticipation of his visit. His poems are accessible, she said, and carry themes most folks can identify with.

“There is a poem in his forthcoming collection that really sticks with me,” Beers said. “In the poem, the speaker of the poem (presumably Stafford himself) has been let go from a job and is anxious about his life path, but he and his family enjoy eating watermelon on the porch and watching the moon. It’s a really peaceful, beautiful poem about appreciating the simple things in life.”

“It helps them envision themselves in the literary world and feel valued as readers to have opportunities to see such people read,” she explained. “I’ve had several students in my composition courses become curious about poetry simply because of seeing the posters for this event — they had no idea that there was a position such as Oregon poet laureate.”

Many students also said they were surprised such a figure would visit them, Russell added, “so it has also been validation for some students that they matter as scholars as much as students elsewhere in the state.”

Stafford gave a similar take. He said the number of people who come to readings and workshops in rural Oregon varies, but the people who come are important. Wednesday he was at Columbia Gorge Community College, The Dalles, and a student showed her translation of one of his poems into her native language of Tagalong. He said the gesture moved him, and other students expressed how poetry helped them.

“Very touching testimonies, really,” Stafford said, “about the power of poetry in restoring the spirit, clarifying the vocation, and recovering from the news cycle.”

Stafford is big on recovery. His book, “The Flavor of Unity,” is an effort to bring the nation together after the 2016 presidential election. Thursday night he read “Practicing the Complex Yes” a short work about striving to find common ground. And Friday morning at the arts center he conducted another poetry workshop, “Poems for a Better Nation.” He said he teaches we have two things — a vote and a voice. The first is numerical and finite. The other can carry and grow, and even guide the community. And poetry is a means for that to happen.

Take geese in flight, he said. The lead bird is no master of where the flock flies. The other birds are honking about the lake over there or the weather up ahead. They all contribute to the direction of the flock.

“I think,” he said, “that’s how communities thrive.”