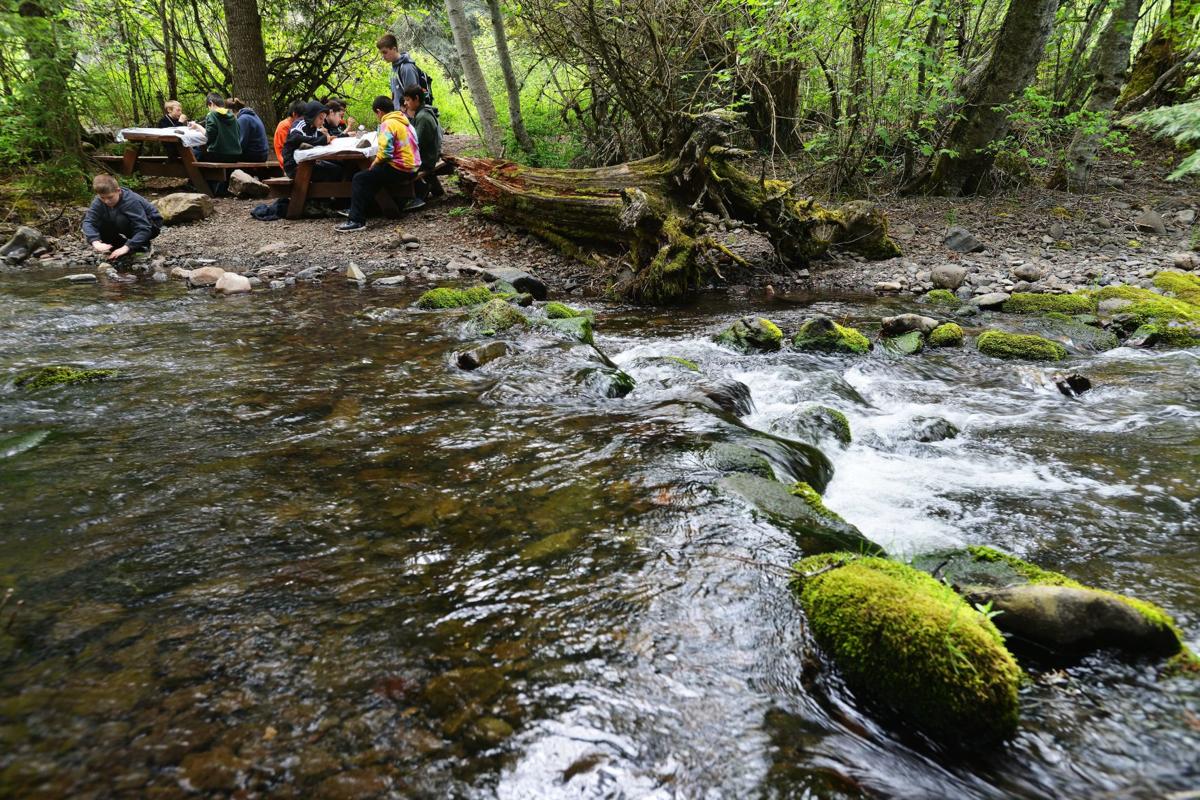 Sunridge Middle School sixth-graders take an art class on the banks of Buck Creek at the Pendleton School District's Outdoor School Thursday in the Blue Mountains east of Pendleton. 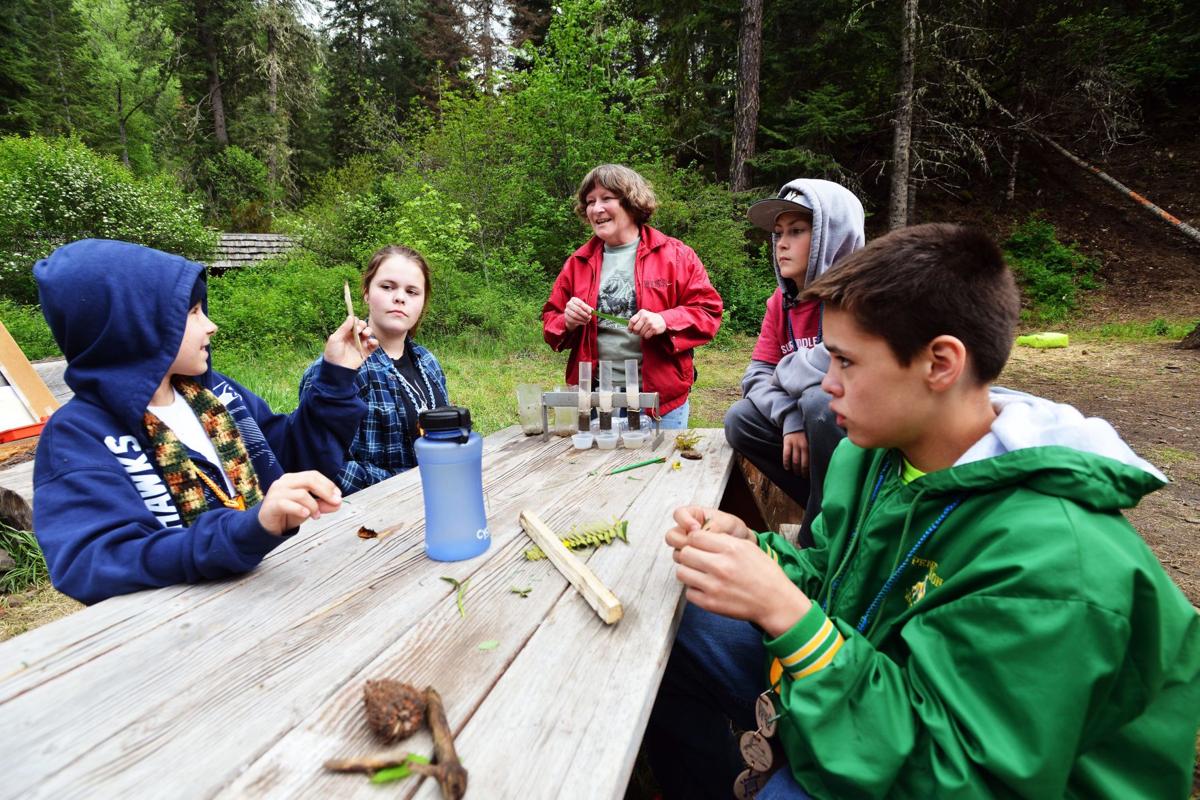 Sunridge Middle School sixth-graders take an art class on the banks of Buck Creek at the Pendleton School District's Outdoor School Thursday in the Blue Mountains east of Pendleton.

On more than one occasion, budget cuts have forced the districts to write Outdoor School off the books. But each time, dedicated parents and community members have stepped up to raise the money needed to keep it operating.

Now, a statewide coalition of parents, educators and local government officials is working to secure state funding to provide Outdoor School for all fifth-graders in Oregon, with a pair of bills currently before lawmakers in Salem.

The Oregon Outdoor Education Coalition formed over the last year to give advocates of Outdoor School a single unifying voice, urging the importance of the program that was first established in 1958 in Crook County.

Outdoor School first came to Pendleton in 1971, and has been run continuously since — despite a few close calls along the way. Caroline Fitchett, who coordinates the statewide coalition, said not all districts are so lucky.

“We’ve seen numerous schools lose their outdoor education program,” Fitchett said. “This is an effort to bring back a very innovative and unique program to Oregon’s students.”

Currently, there is no statewide law for outdoor education, leaving the choice and the responsibility up to individual school districts and communities. The coalition has proposed legislation that would create a grant program available to any district in the state to host a six-day, residential, hands-on Outdoor School for their students.

Senate Bill 439 is not a mandate for Outdoor School, Fitchett said, but a way for administrators to come up with stable funding for outdoor education in areas where they wouldn’t otherwise have the opportunity.

“Right now, it’s an inequitable system,” Fitchett said. “Kids get to go based on the advocates in their area, and ability to fundraise locally. It’s been very piecemeal.”

SB439 and its counterpart, House Bill 2648, have been passed to the Joint Committee on Ways and Means with a do-pass recommendation in both the House and Senate. But the challenge will be coming up with an estimated $22 million to send every Oregon fifth-grader — roughly 51,000 students — to Outdoor School.

Several funding options have been kicked around, including a bump in solid waste fees that could support the program. State Sen. Bill Hansell, R-Athena, said that idea has been heavily resisted by Gilliam County, which counts on waste transported from Seattle to the local Waste Management landfill.

A state revenue forecast released Thursday did project an additional $1.75 billion for Oregon, $473 million of which will go back to taxpayers on an income tax kicker. Despite the good news, Hansell said the overturning of Public Employees Retirement System reforms will lead to cuts down the road.

“As a result of the PERS decision, it’s giving everything a more thorough look-over,” Hansell said. “There are just things where you have to prioritize.”

Teachers and parents in Pendleton and Hermiston say Outdoor School is worth the money.

Hermiston School District actually lost its Outdoor School for a number of years due to budget cuts before it was resuscitated by then-deputy superintendent Mark Mulvihill. They were able to cobble together a shoestring budget, Mulvihill said, and the positive response led administrators to put outdoor education back into the district’s general fund.

Fifth-graders from all five of Hermiston’s elementary schools — Sunset, Desert View, Highland Hills, Rocky Heights and West Park — have the opportunity to spend three days and two nights at cabins in the North Fork Umatilla Wilderness Area. There, they learn about survival skills, the environment, natural resources and are each responsible for chores.

“In my education experience, nothing impacts students as much as Outdoor School does,” said Mulvihill, now superintendent of the InterMountain Education Service District. “Giving them that opportunity to see, touch and feel the wilderness, that’s priceless.”

In Pendleton, Outdoor School has been on the chopping block at least three times, said Sunridge Middle School Principal Matthew Yoshioka. The last time came in 2011, when the district was also forced to cut 21 teaching positions and 10 days off the school year.

Yet every time, Yoshioka said parents and businesses came forward with fundraising on their own.

“It’s been such an important thing in Pendleton for so many years,” Yoshioka said. “A lot of students learn so much better when they’re out of the classroom, and we live in such a perfect location for it.”

Sixth-graders from Sunridge also travel to the North Fork Umatilla Wilderness cabins, which are leased by the InterMountain ESD from the Forest Service.

Sue Bynum, a former Pendleton teacher who now lives in Wilsonville, was part of the fundraising team to save Pendleton Outdoor School in 2011. She said they needed $15,000 to continue the program into the next year. They ultimately raised more than double that amount.

“It wasn’t easy raising the money. But there was huge support for it,” Bynum said. “People were willing to open up their pocketbooks to support it.”

Outdoor School is now funded partially by the district, and partially by grants and donations, including $1,000 given every year by the Pendleton Cattle Barons.

Bynum said it would be better for the program to be state-funded to ensure its future.

“Especially in a small community, there’s only so many years people can donate,” she said. “It’s part of (kids’) educations, which should be fully funded by the state.”

If they are unsuccessful at the legislature, Fitchett said they could turn to a ballot measure and take the issue directly to voters.

“Oregonians value our natural resources. That’s part of who we are,” Fitchett said. “Hopefully we’ll be able to pass a funding source for Outdoor School.