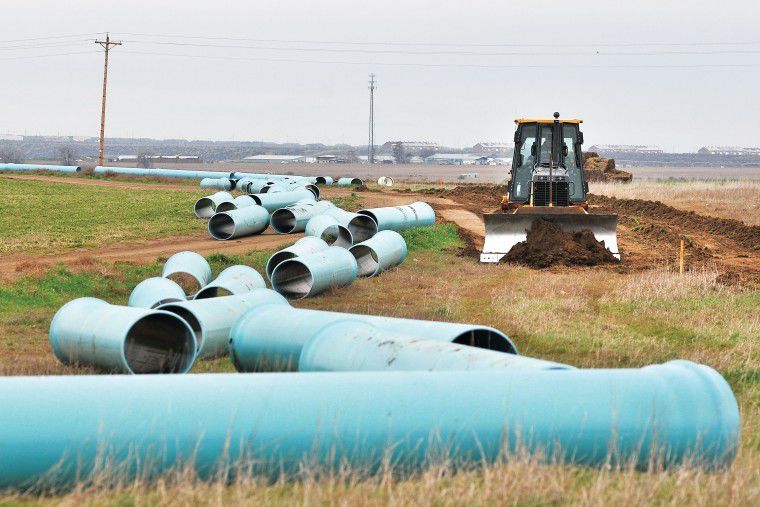 A bulldozer is used to clear the path for a pipeline Monday during the construction of the Umatilla Basin Water Commission’s aquifer restoration project outside of Hermiston. 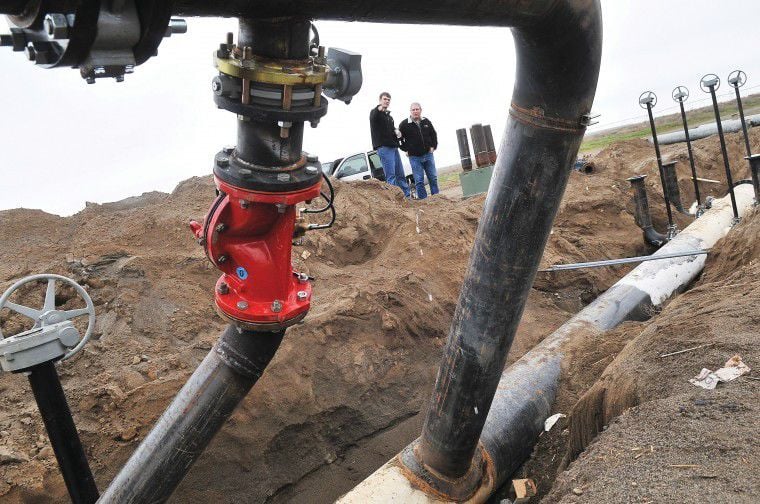 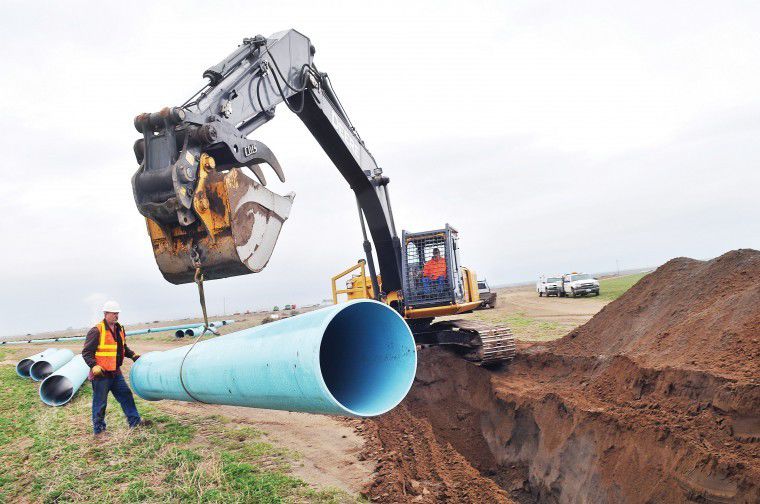 A section of 24-inch pipe is moved into place Monday as a work crew from Rod Anderson Construction builds the pipeline for the Umatilla Basin Water Commission’s aquifer restoration project outside of Hermiston.

A bulldozer is used to clear the path for a pipeline Monday during the construction of the Umatilla Basin Water Commission’s aquifer restoration project outside of Hermiston.

A section of 24-inch pipe is moved into place Monday as a work crew from Rod Anderson Construction builds the pipeline for the Umatilla Basin Water Commission’s aquifer restoration project outside of Hermiston.

Soon water will begin trickling out of a pipe system into the sandy ground in a field near the Interstate 82 and Interstate 84 interchange. It will bubble out, looking much like a storm drain.

But that trickle will be the start of something big  the actualization of the Umatilla Basin Project.

As a visual, its not something that a lot of people are going to want to come out and put a plaque on, said J.R.  Cook, executive director of the Umatilla Basin Water Commission. Our investment is underground and our water storage is underground.

That water going into the ground will have quite a journey.

It starts in the middle of the Columbia River. About 100 yards from shore, a 70-inch GreenWood Tree Farm pipeline pulls water from the river.

The water travels to a lift station onshore, then goes into the tree farms system, traveling about nine miles. It meets a cluster  a valve to make sure GreenWood gets the pressure it needs while delivering water into another system. Then it enters the Umatilla Basin Projects pipes.

It allows us to get as much water as we possibly can during the recharge season and still keep the users of the system whole, Cook said. Theyre still going to be able to get water the way they previously got it.

The water then will travel into those Umatilla Basin Project pipes: 24-inch PVC pipes installed during the last two weeks.

When you hear 24 inches, youre not thinking that much water, Cook said, but thats going to be a lot of water moving through.

Those pipes continue for 5,800 feet, more than a mile, to the projects recharge ponds. Thats where the water trickles out and the sandy soil absorbs it into the ground.

Its like when a storm drain overflows and you see it bubbling out, Cook said. Thats what will be here, just a controlled recharge application.

Cook said this about two weeks ago, before the UBWC installed the 5,800 feet of new pipe. Even as the project was being built, he marveled at its simplicity.

This design is so simple, he said. The simplicity of it is what makes it so unique and so interesting.

The project is the result of decades of water work by irrigators, environmentalists, government officials, American Indian tribes and many others. Its the current result because this first bit of water going into the ground is a pilot project for later incarnations of the water recharge movement in Eastern Oregon.

This first project will put 6,000 acre feet of water into the ground next winter.

In April the new pipes will begin bringing in water for the first time, but because the recharge season is almost over, it wont get the full 6,000 acre feet in this year.

We couldnt have an event for breaking ground because things are happening so fast, Cook said. In April we hope to get folks out from Salem to show water going into the ground.

Cook wants to show Salem because the project is funded by $2.5 million from the state. Rep. Bob Jenson, R-Pendleton, helped support the project, and Cook has worked closely with the Oregon Water Resources Department to make the project happen.

Along with being the first step to a large-scale recharge, its more than just water. As Cook points out, the project is a way to keep agriculture going in Eastern Oregon.

People always need to eat and theres always innovation and job creation due to your base, which around here is an agricultural base, he said.

Work like the Umatilla Basin Project are meant to ensure water will stay available to fuel farming and fuel the rest of Eastern Oregons economy.

Along with keeping government and irrigators interests in mind, Cook has been coordinating with others to make sure water will go to help keep the river systems running well enough to support fish. He and the UBWC also make sure tribal water rights, as well as farmer and city water rights are being upheld.

Its my job to put it all together and make sure all those various interests are begin met, he said. But thats whats fun about it.

And with the work done this week, much of that work will become a reality. When the water flows, Cook and the UBWC hope its a first step toward making everyone whole.