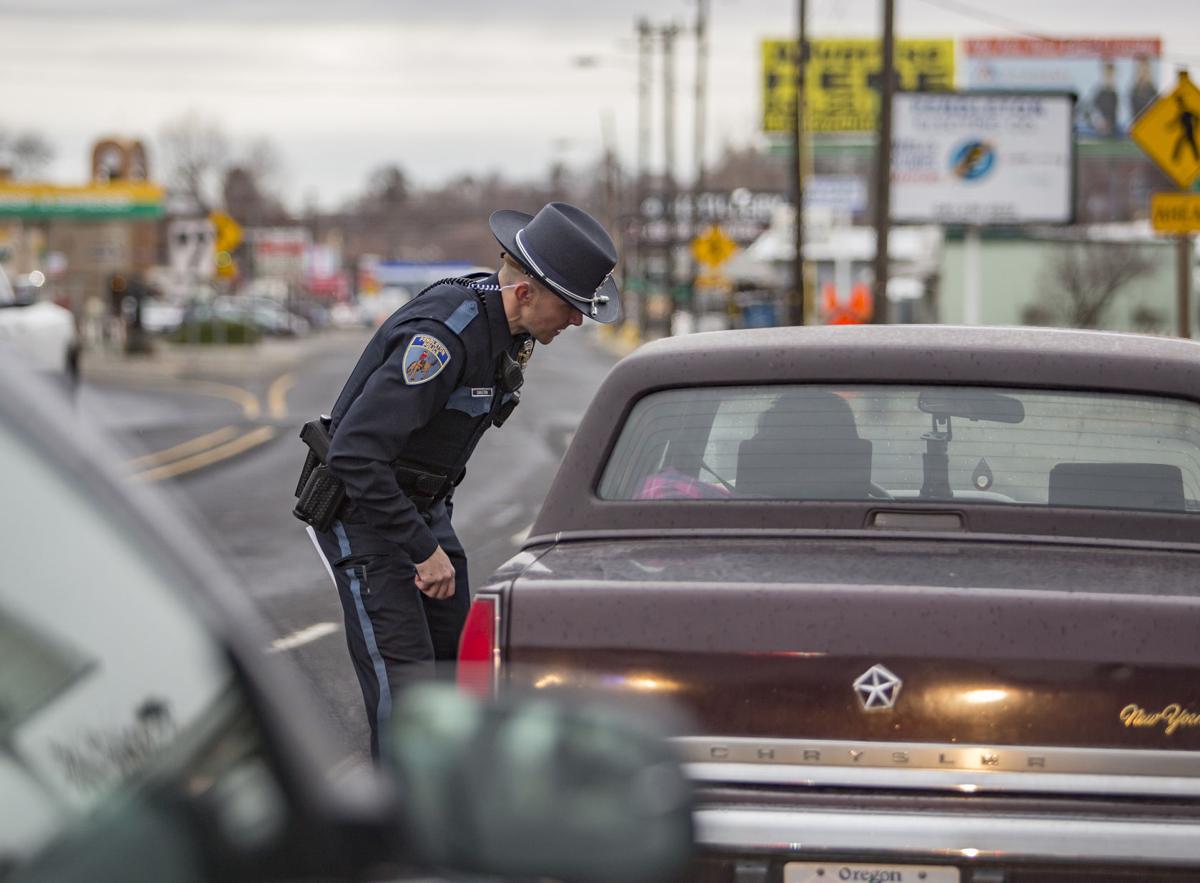 Officer Ben Carleton, with the Pendleton Police Department, speaks with a driver during a traffic stop on the corner of Southeast Court Avenue and Southeast Ninth Drive in Pendleton on Friday morning. The driver was cited for failure to show proof of insurance and driving uninsured, and the vehicle was towed from the scene. 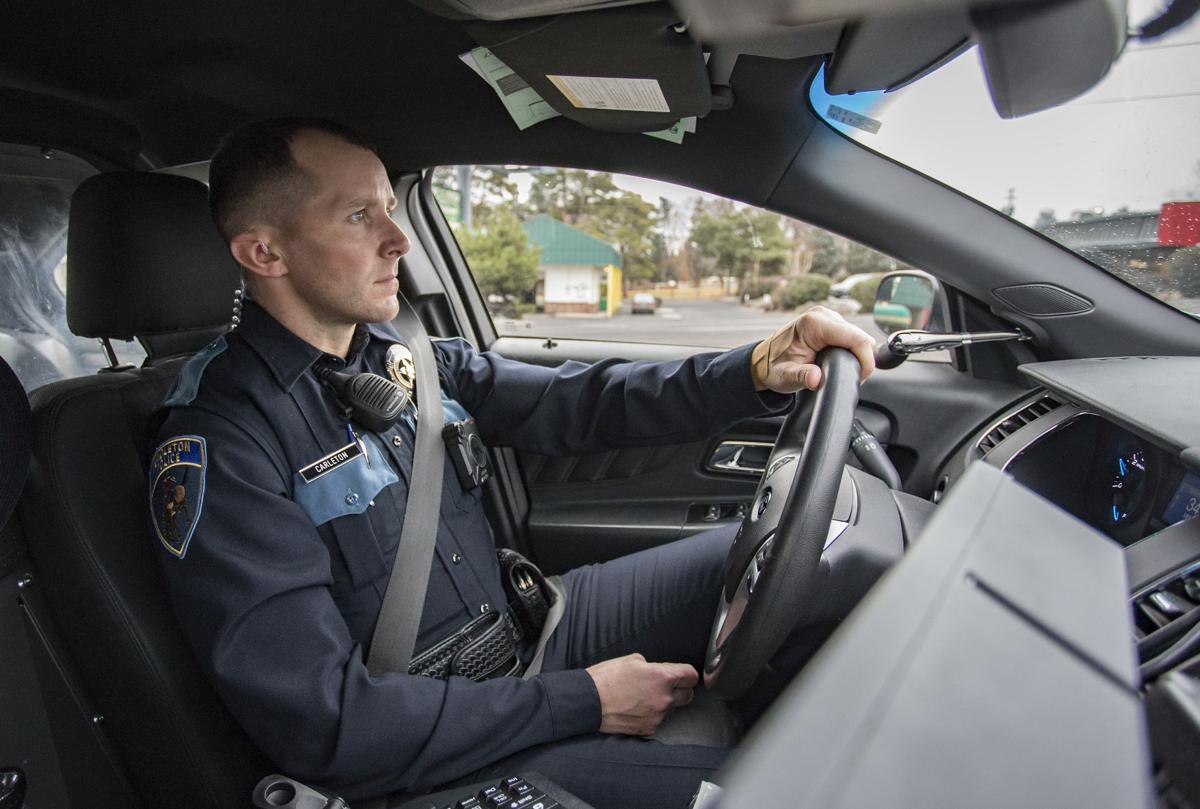 Pendleton Police Officer Ben Carleton drives up Southgate in Pendleton in search of a subject with a warrant on Friday morning. 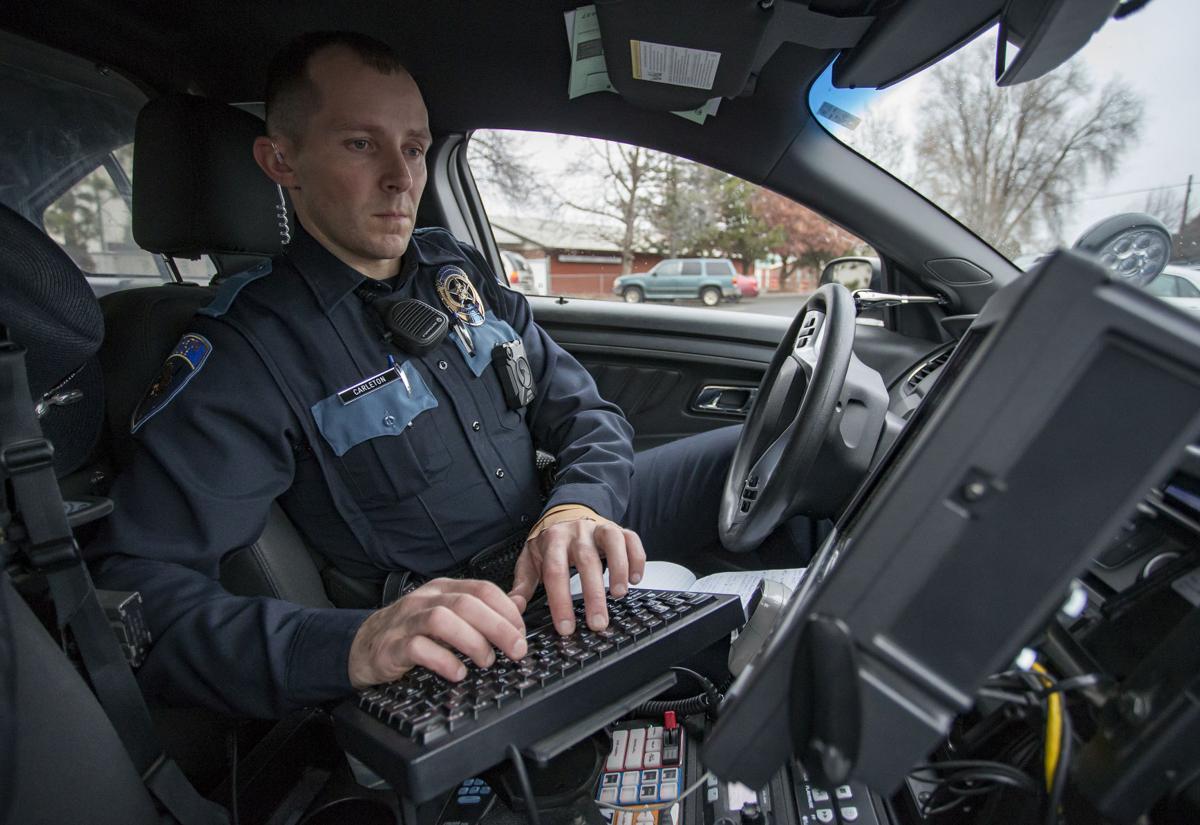 Pendleton Police Officer Ben Carleton enters information from a hit-and-run collision in the parking lot of Bi-Mart in Pendleton on Friday morning.

Officer Ben Carleton, with the Pendleton Police Department, speaks with a driver during a traffic stop on the corner of Southeast Court Avenue and Southeast Ninth Drive in Pendleton on Friday morning. The driver was cited for failure to show proof of insurance and driving uninsured, and the vehicle was towed from the scene.

Pendleton Police Officer Ben Carleton drives up Southgate in Pendleton in search of a subject with a warrant on Friday morning.

Pendleton Police Officer Ben Carleton enters information from a hit-and-run collision in the parking lot of Bi-Mart in Pendleton on Friday morning.

UMATILLA COUNTY — Umatilla and Morrow counties cover more than 5,000 square miles and, according to 2019 projections, are home to more than 90,000 people. Nearly a dozen law enforcement agencies are tasked with keeping them and the region safe, and no one department can do it alone.

“It’s a reality of this kind of work in rural Oregon,” Pendleton Police Chief Stuart Roberts said. “We understand we’re going to have to work together.”

At a basic level, the region’s law enforcement agencies are signed into a mutual aid agreement, which was most recently updated and agreed to in 2013.

The agreement, Hermiston Police Chief Jason Edmiston said, specifies the understanding that a majority of the agencies in the region are small and rural with limited resources, and require assistance from one another. The agreement allows for agencies to freely request backup or additional resources, whether that be equipment or expertise, from whoever can provide it.

While the mutual aid agreement remains in place, Roberts said there’s mostly an informal understanding of a “gentleman’s agreement” to help each other out whenever it’s needed without the need for financial reimbursement.

But in order to help each other, the agencies must first communicate, and dispatch centers are at the root of that communication.

“Any emergency call starts with us,” said Capt. Kathy Liueallen, the Umatilla County dispatch commander. “We’re the ones that send them where they need to go.”

The Umatilla County dispatch center is responsible for handling all emergency calls within the county, except for Oregon State Police and Milton-Freewater Police Department. When a call comes in from a landline, the dispatchers are notified of which agency’s jurisdiction the call’s coming from and which should respond, Liueallen said. If it’s from a cellphone, she added, the call appears on a map and dispatchers must identify the proper agency to contact.

In the event that a call arrives that’s intended for state or Milton-Freewater police or vice-versa, Lieuallen said dispatchers are able to transfer calls to the right agency.

From there, the responding agency is able to make use of unified systems that stretch between the two counties as a part of the Umatilla Morrow Radio & Data District to coordinate with others if needed.

According to Morrow County Sheriff Ken Matlack, this radio and data system allows law enforcement to share information between agencies and quickly coordinate responses. The radio systems contain multiple channels, he said, allowing officers to either communicate across the region or focus on a particular area they are patrolling.

This came in handy last week for Umatilla County Sheriff Terry Rowan, who began to respond to a report of a rolled vehicle when he was quickly called off by Stanfield Police Chief Bryon Zumwalt, who was already on his way to the scene.

Rowan said his deputies rely on the ability to quickly contact and be assisted by other agencies regularly, especially since they are often stationed on the outskirts of Pendleton and Hermiston away from other sheriff’s deputies.

Being ready to help when needed

For small departments like Pilot Rock’s, which consists of just three officers, the reassurance of having backup nearby is critical. Police Chief Bill Caldera spent 30 years as a police officer in Pendleton before taking the top position in Pilot Rock 3½ years ago, and said his relationship with Roberts and his department has been indispensable.

“I’ve got nothing but wonderful things to say about the support our department has got from Roberts and Pendleton over the years,” Caldera said. “And it’s a two-way street, we’re here to help anyone.”

Roberts said he’s happy to send anyone help who needs it, but has taken a more conservative approach when it comes to requesting it.

“My philosophy is I don’t ask for anything I don’t need,” he said.

Mostly, those needs tend to arise when the Pendleton Round-Up or Pendleton Whisky Music Fest bring thousands of visitors to the area.

During those events, Roberts said detectives from around the region are brought in so they are closer if a significant event occurs, and state police often provide mobile response units, which are troopers on bicycles who can more effectively manage large crowds.

At the Round-Up, however, Roberts said the sheriff’s office is contracted and has jurisdiction of the stadium and grounds during that week.

In Morrow County, Matlack and his deputies primarily coordinate with the county’s only other police department in Boardman.

“They know if they get a case, or they need cover or a second officer for any reason, we’ll be there and assist each other on any given day at any given time,” he said.

Boardman Police Chief Rick Stokoe said building a strong relationship with Matlack and his office has been essential, and that his officers have benefited from training sessions with them in Heppner.

There are four other cities within Morrow County, none of which have their own police department. Heppner and Irrigon contract with the sheriff’s office, Matlack said, which means they have deputies stationed there ready to respond.

Additionally, those cities pay for the deputies’ vehicles that need to be replaced every three years. Matlack said they’ve also established a successful program within the contract that rotates the deputies’ former vehicles into the city fleet so they don’t go to waste.

The county’s remaining towns — Ione and Lexington — don’t contract the sheriff’s office for service but remain in its jurisdiction. Matlack and his deputies are responsible for emergency responses to the area, he said, but typically they’re unable to provide code enforcement.

In Umatilla County, Rowan said Athena and Weston both contract for service while smaller communities like Helix, Adams and Ukiah don’t.

Along with the ability for the counties to communicate and share data, at the heart of their relationship is the Umatilla County Jail.

Matlack said Morrow County hasn’t had its own jail since 1969, and now contracts with Umatilla County at a price of $60 a day per person. Currently, this provides his office with 20 beds with a yearly price tag of $500,000.

While it’s spendy, Matlack said they’ve shopped around and transported people to jails in Washington, and that prices in the Willamette Valley can climb as high as $180 a day per person.

“It’s always geared toward where can I find the best deal,” Matlack said.

State police presence in the region

Standing by ready to help both the county and municipal agencies are more than 30 state troopers spread throughout the region.

“That’s our primary mission, to work and support other agencies,” said Lt. Karl Farber, who serves in Pendleton’s state command center. “If an agency asks for our support, then we’re going to lend as much help as we can.”

The state police’s jurisdiction remains locked with the right-of-way corridor of state highways within the region, and often troopers are responding to car crashes; however, troopers are also there to assist with pursuits and investigations.

On Monday, for example, the state’s bomb squad was called to assist Hermiston PD when a traffic stop ended with the discovery of a grenade. Farber said in cases like that, troopers will assist until they’re no longer needed and then hand the rest of the evidence to the lead agency.

Oregon State Police also have access to resources to model and investigate car crashes that local agencies can utilize.

Last month, freezing fog and slippery road conditions led to a 23-car pileup that temporarily closed down the Umatilla Bridge between Oregon and Washington and required cooperation between state troopers on both sides.

As Farber explained, Oregon and Washington State Police’s jurisdiction splits down the middle of the bridge, and troopers worked together to clear their respective sides.

In Hermiston, Edmiston said he and his officers maintain relationships with departments in Southern Washington, such as Walla Walla, Kennewick and others.

Edmiston said he and some officers attend a yearly breakfast hosted by Kennewick Police Chief Ken Hohenberg and featuring other departments in the Tri-Cities area.

“We know that criminals don’t recognize the border between Washington and Oregon,” Edmiston said.

What brings all the agencies together, however, are major crimes and drug enforcement.

The Blue Mountain Enforcement Narcotics Team, or BENT, includes members from Morrow and Umatilla counties, Boardman, Milton-Freewater, Hermiston, Pendleton, the Umatilla Tribal Police, Oregon State Police, the FBI and the U.S. Coast Guard. The team works separately from other agencies in the region and is dedicated to investigating and disrupting high-level drug trafficking organizations.

The Umatilla Morrow Major Crime Team was activated Monday to investigate a homicide in Milton-Freewater, and consists of detectives, officers and resources from the Oregon State Police, Umatilla and Morrow counties, Pendleton, and Hermiston.

The team only forms when a major crime occurs, and is led by whichever agency’s jurisdiction the crime occurred in. Sheriff Rowan said the size of the team is determined by the magnitude of the crime.

According to Sheriff Matlack, spots on the team are reserved for only those who can handle it.

“They all carry their own load and share everyone else,” he said.

Rowan, who previously worked as a detective in Hermiston, said these major crime teams are where communication between agencies can be critical.

“They may have the missing link that carries a case all the way through its conclusion,” he said.

To keep connections between agencies strong, sheriffs, chiefs and law enforcement throughout the region try and gather once a month to discuss any important cases or statewide news and policies that may impact them locally.

Along with everything else local law enforcement shares, what stands above it all is a shared commitment to helping each other.

“I just like to think that in law enforcement we’re all a part of a big family,” Rowan said. “And we’re there to tend to each other’s needs.”