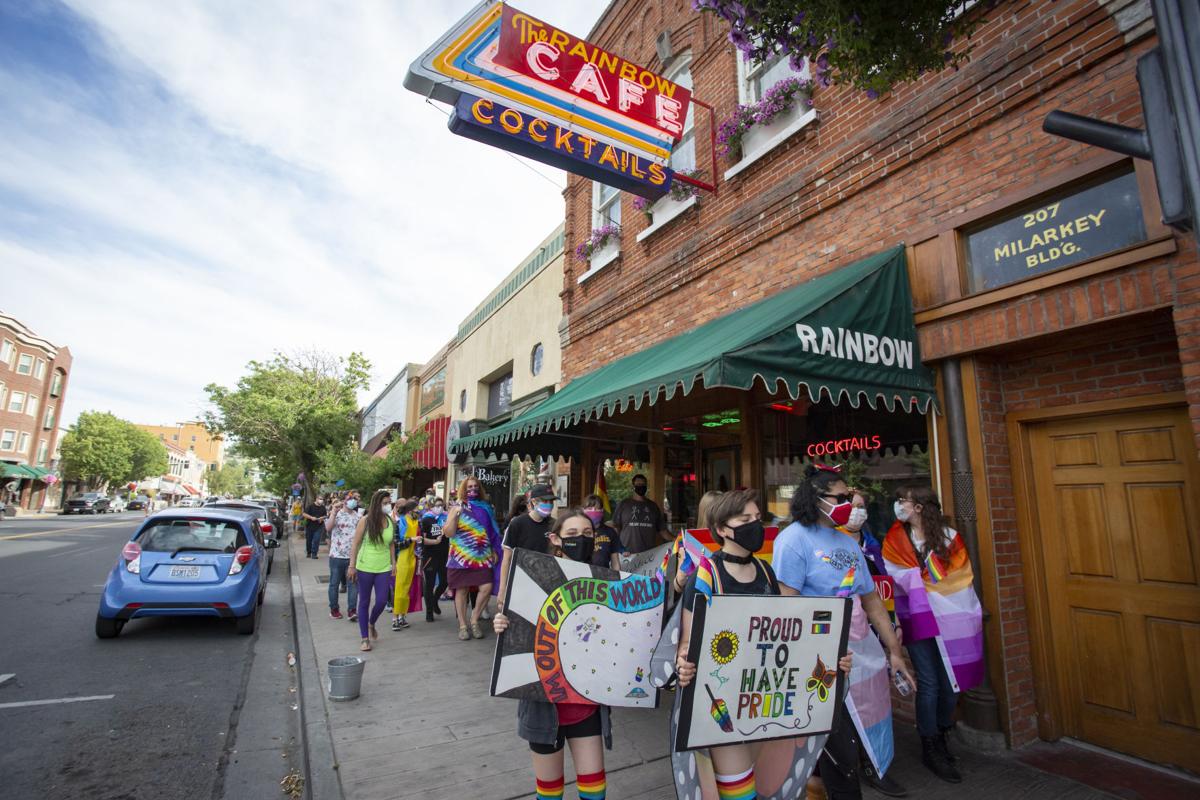 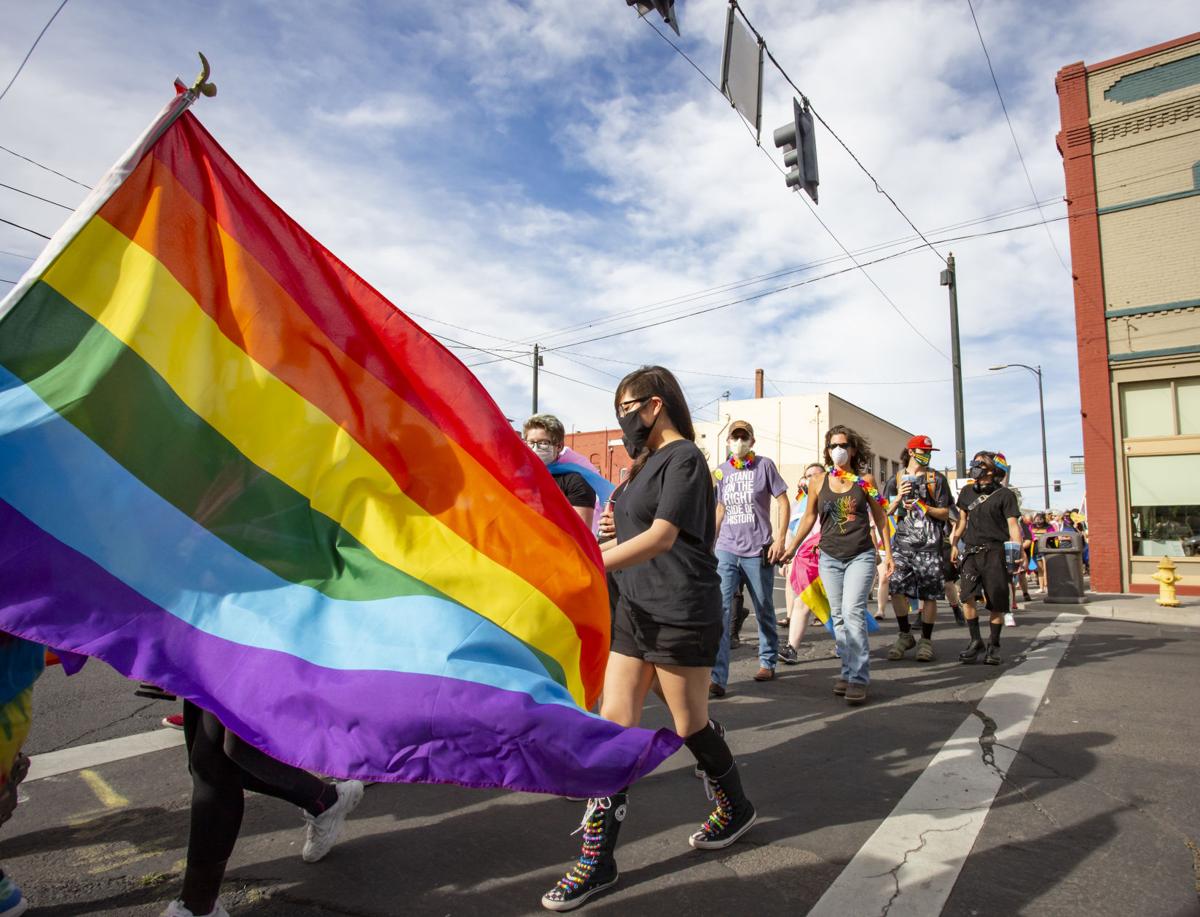 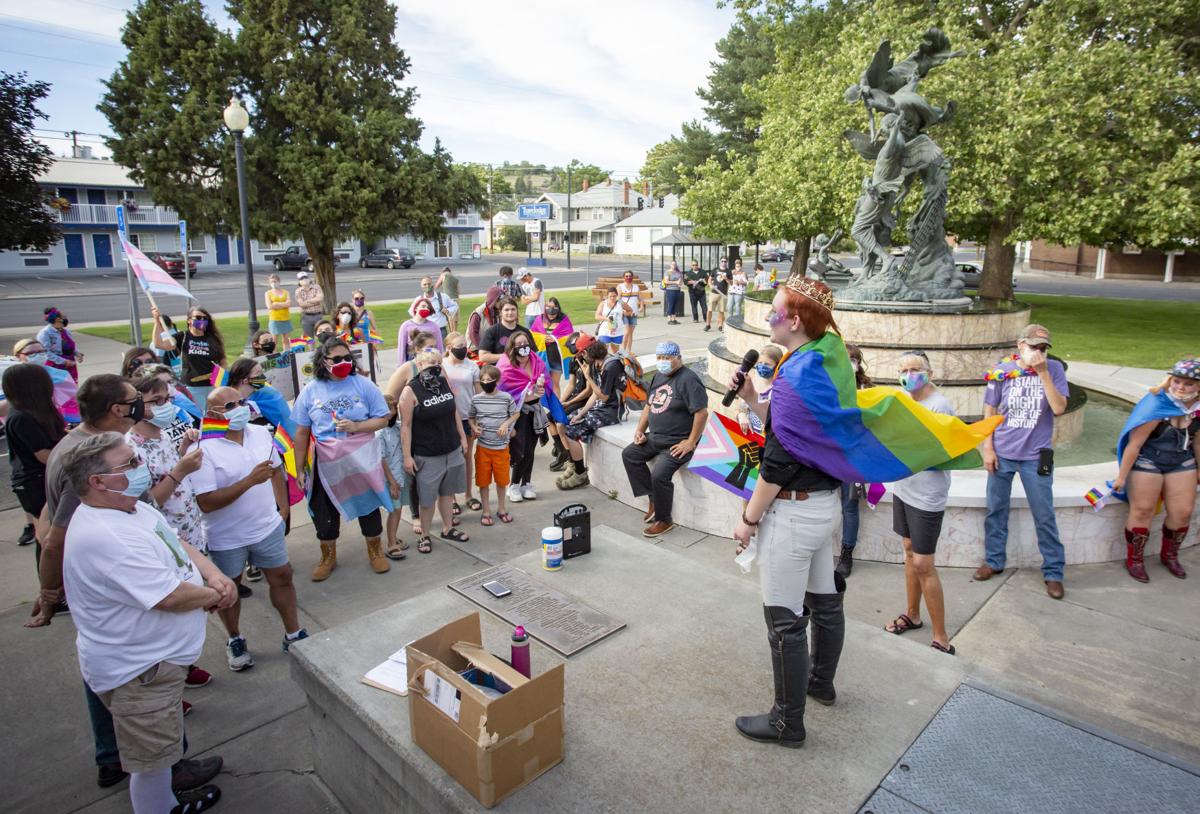 Aiden Bork, 15, speaks to marchers during a Pride event in Pendleton on Wednesday, June 24, 2020. The event drew roughly 75 people and included a march and speeches.

Aiden Bork, 15, speaks to marchers during a Pride event in Pendleton on Wednesday, June 24, 2020. The event drew roughly 75 people and included a march and speeches.

PENDLETON — For the first time in the city’s history, a parade of roughly 75 people marched through Downtown Pendleton on Wednesday in celebration of Pride month and in support of the LGBTQ community.

Decked out in colorful flags, clothing and masks that represented the spectrum of the community, the parade congregated at Pendleton City Hall before marching east down Dorion Avenue and looping back around on Main Street.

The event was co-hosted by PFLAG Pendleton. But it was all jump-started by the initiative of 15-year-old Aiden Bork, a nonbinary, asexual and panromantic student who has grown up in Pendleton.

Bork said it started with the desire to create a supportive and inclusive environment for the community to engage in, but quickly developed when their friends started pitching in to make posters and promote it as a Pride event.

“I kept mentioning the fact that I wanted to have a place of support,” Bork said in an interview after the event. “But it was originally a joke saying me and my friends could just lead it ourselves.”

The joke became a reality on June 24 as Bork and their friends led more than 70 members of the community in a march through Downtown Pendleton.

“It was exhilarating,” Bork said. “It’s genuinely amazing the fact that we have so many people who not only identify the way that they want to, but they’re also willing to stand together and be with one another.”

While June 24 was the first-ever parade or event in Pendleton specifically dedicated to celebrating Pride, Pendleton PFLAG and the local LGBTQ community have held other marches and been active in Pendleton for well over a decade.

PFLAG is a national organization that aims to support members of the LGBTQ community, families and allies, along with providing education about issues facing the community and advocacy to address them.

Read said she became an ally around 1997 after her son came out as gay, though she struggled to accept it at first. She later attended a PFLAG meeting while working to get her counselor certificate at Oregon State University.

Once she returned to Pendleton, Read helped organize the local PFLAG chapter, and then worked alongside a group of students and the administration at Pendleton High School to develop the school’s gay-straight alliance that continues today.

The older members of Pendleton PFLAG were joined by dozens of teenagers on June 24 in a generational intersection of the local LGBTQ community. As attendees stepped forward to speak about their own experiences, some noted how important holding Pride events like these can be in building a more inclusive community for the future.

“It’s a small gay community here, so we’ve had to learn how to deal with it in our own way coming from a small town,” said Ashley Jones, who marched June 24 with her partner and her young children and noted the judgement the LGBTQ community can often experience from family and neighbors in Pendleton.

“I want to teach (my children) what it means to be non-judgemental and to be loving, and show them the way. That’s been quite a challenge, so I’m glad to see our community is doing something like this so they can grow up learning these things.”

Bork said there’s already been discussions about holding a similar event next year and continuing to celebrate Pride month in future years.

While it may have been a long time coming for the city of Pendleton, the Pride parade was a tangible sign of progress toward a more inclusive community in the eyes of Read, who couldn’t help but get goosebumps each time a young person got up to speak their truth.

“When I tell them we waited for 15 years, I mean it. We are so far behind for where we should be for our kids,” she said. “But we’re getting there. These kids feel loved.”