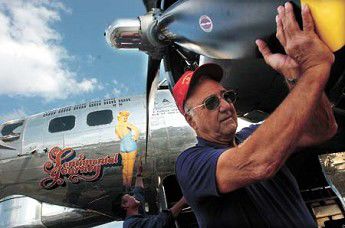 Co-pilot Russ Owens turns the propeller on an engine of a World War II B-17 bomber Friday while prepping the airplane for flight at Walla Walla Regional Airport.<BR><I>Staff photo by E.J. Harris</I> 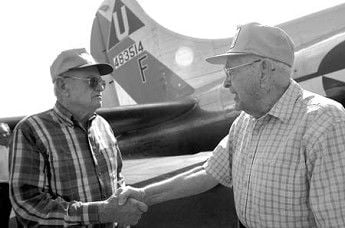 Don Parsons greets Eugene Fletcher while visiting Sentimental Journey Friday at the Walla Walla Regional Airport. Parsons served in the 15th Air Force in Italy as a flight engineer of a B-24, while Fletcher served in the Eighth Air Force stationed in England as a pilot in a B-17.<BR><I>Staff photo by E.J.Harris</I>

Co-pilot Russ Owens turns the propeller on an engine of a World War II B-17 bomber Friday while prepping the airplane for flight at Walla Walla Regional Airport.<BR><I>Staff photo by E.J. Harris</I>

Don Parsons greets Eugene Fletcher while visiting Sentimental Journey Friday at the Walla Walla Regional Airport. Parsons served in the 15th Air Force in Italy as a flight engineer of a B-24, while Fletcher served in the Eighth Air Force stationed in England as a pilot in a B-17.<BR><I>Staff photo by E.J.Harris</I>

Sixty-seven years ago, Eugene Fletcher was a 21-year-old Whitman College student with a private pilot's license.

With World War II raging, Fletcher joined the Air Force. He jumped into the cockpit of a B-17 bomber, called the Flying Fortress, and piloted the high-flying, long-range bomber in strategic air battles over Europe.

Friday, the 88-year-old watched as a B-17 landed at the Walla Walla Regional Airport. The plane, dubbed "Sentimental Journey," is a flying museum of sorts, giving people who weren't even alive during World War II a chance to journey back in time and glimpse history. About 50 people eyeballed the plane inside and out, then stood on the fringes of the tarmac and watched the plane sputter to life and take to the sky.

For Fletcher, who piloted 35 missions in a different B-17, the sight of the silver plane and its gunnery turrets brought a cascade of memories. He told of a four-day series of missions that took his 10-man crew from England for bombing raids in Germany, Poland, Romania and France ,with refueling stops in Russia and Italy.

The adrenaline ran fiercely, Fletcher said. He couldn't remember any missions where his plane came back completely unscathed.

Despite the airplane's thin skin, only one man sustained injuries, a scalp wound.

Fletcher pointed to a ball turret on the belly of the plane. Inside, a gunner could turn in any direction to shoot at enemy aircraft.

"I wouldn't have flown there on a bet," he said. "You were isolated - all by yourself."

The gunner could barely fit into the turret with his parachute, Fletcher said. The space is so tight, a gunner couldn't get his chute all the way on.

"One side was loose," Fletcher said. "When he did freefalls, he hooked the other side as he fell out backwards."

The plane is equipped with four separate engines, each with its own oil tank. If one engine quit, the plane continued to fly.

"A lot of times, I had to land with less than four engines," Fletcher said. "I got used to it."

A pilot could even land with one engine, he said, though only if the runway was in clear sight.

"This was the Flying Fortress - it's a tough bird," he said. "I'm absolutely blessed to be able to pilot this airplane."

The crew brings history to the people, he said, moving to a different town every week or so. The plane, based in Falcon Field in Mesa, Ariz., is still equipped with Browning machine guns and has six bomb casings in the bay. The plane appeared in the World War II movie, "All the Fine Young Men." The sultry image of Betty Grable graces the nose.

Gilmore has seen tears in the eyes of some who gaze at the plane. Some are family members of men who flew on B-17s.

"This makes it real when people can touch it and see it flying," he said.

After World War II, the function of Sentimental Journey changed multiple times. It flew as a photo mapping plane, participated in air-sea rescue, and was a part of Operation Greenhouse, an atmospheric nuclear test series that used unmanned B-17 drone aircraft to measure blast and thermal effects in the Bikini Islands. In later years, the plane flew thousands of sorties as a borate bomber during forest fires.

The Arizona Wing of the Commemorative Air Force received the airplane as a donation in 1978 and began restoring it.

"It took a million man hours to restore this aircraft," Gilmore said.

"We went around every rivet with a toothbrush," he said, adding that the plane has 1,100 pounds of rivets. "It took thousands and thousands of hours."

The plane will remain in Walla Walla for public viewing through Sunday at the old terminal from 9 a.m. to 6 p.m. Cost to go inside is $5 for adults and $3 for children, 5-12. For children under 5, entry is free. People who wish to fly on Sentimental Journey can do so for $425.

"Every nickel goes into keeping the airplane flying," Gilmore said.