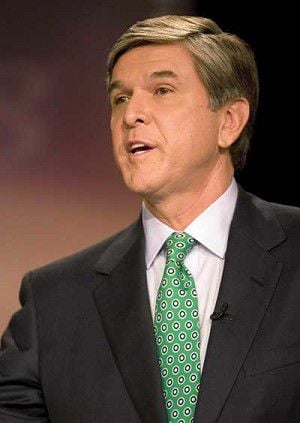 <i>"He talks about visiting rural Oregon; I can tell you, rural Oregon doesn't need a visitor, it needs a voice and a vote."</i><br>Sen. Gordon Smith 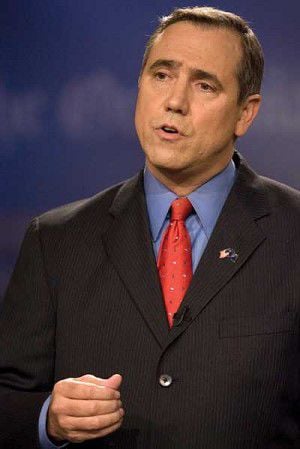 <i>"Do you understand that our children are going to have to pay back the debt you are running up?"</i><br>Jeff Merkley

<i>"He talks about visiting rural Oregon; I can tell you, rural Oregon doesn't need a visitor, it needs a voice and a vote."</i><br>Sen. Gordon Smith

<i>"Do you understand that our children are going to have to pay back the debt you are running up?"</i><br>Jeff Merkley

PORTLAND - Republican Sen. Gordon Smith and Democratic challenger Jeff Merkley clashed Thursday over issues ranging from tax cuts to the Wall Street meltdown to negative advertising in the first of their two debates.

The negative tone of the campaign, specifically in some of the recent television ads, followed the candidates to Portland's KGW-TV studios, where the two men engaged in heated arguments.

In what is considered a tough year for Republicans, Smith, who is seeking a third term, stressed that he works well with his Democratic colleagues and opposes the Bush administration on issues such as the war in Iraq.

Merkley, meanwhile, took a page from presidential candidate Barack Obama's playbook, linking Smith to what he called President Bush's "failed" economic policies while promoting himself as an agent of change.

The debate, which comes as polls show the race a toss-up, ultimately boiled down to a contest to see who could best reflect Oregon - urban and rural, Republican and Democrat - on the national level.

The first policy question centered on the Bush tax cuts, in particular how Smith could defend them in light of the current economic crisis.

"I believe in pro-growth tax cuts," Smith said. He said that Oregonians today were paying lower federal taxes because of him, but higher state taxes because of Merkley's work in the state Legislature.

Taxes came up again when both candidates were asked whether it was smart to cut taxes during a time when the national debt is growing. Merkley hung the blame on Smith's shoulders.

"Do you understand that our children are going to have to pay back the debt you are running up?" he asked.

"So what would you have me do?" Smith asked. Much of the money he's asked for, Smith said, has been because state senators, representatives and others back home have asked him for it.

As for the economic crisis, Merkley blamed deregulation supported by Republicans such as Smith. For his part, Smith argued that Merkley was out of touch in his choice to oppose the recently approved $700 billion bailout package.

Both candidates said they supported government help for those people facing foreclosure.

When the candidates were asked where their stance differs from their own party's, Merkley mentioned having opposed the Iraq war from the very beginning. When Smith challenged that assertion, Merkley shot back.

"You know about that speech, yet you choose to mislead the citizens of this state," he said. "We are mired in war. We are mired in debt. You're chair of the debt reduction committee."

Oregon's rural-urban divide was another of the night's topics as both men painted themselves as people who could empathize with all sorts of Oregonians. Merkley brought up his father's job in a mill and said that his campaign tour of 100 Oregon towns showed he was committed to representing all of the state.

Smith hit back: "He talks about visiting rural Oregon; I can tell you, rural Oregon doesn't need a visitor, it needs a voice and a vote."

The bitter tone fell away for a few minutes when the candidates were asked to name three things they liked about each others' voting records. Merkley said he respected the way that Smith has supported mental health care, the tobacco tax for children's health care and hate crime legislation.

Smith, at first confused by the question, said Merkley has a cute daughter and a wife who, though he has never met her, seems like a "lovely" person. When asked specifically about Merkley's voting record, Smith drew a blank.

The two men will meet for a second debate Monday in Medford.