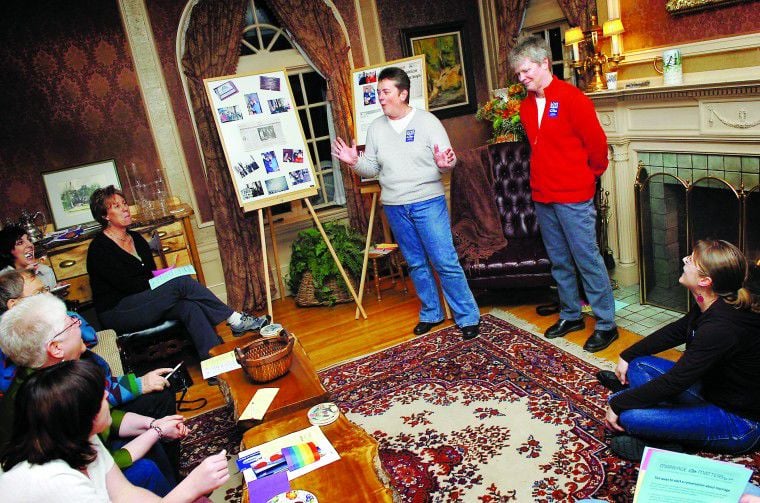 Diane Groff, center, and Liz Cahill, center right, share their experiences Wednesday at a Marriage Matters meeting in Pendleton. The couple was married during the brief period in 2004 when Multnomah County was issuing same-sex marriage licences. 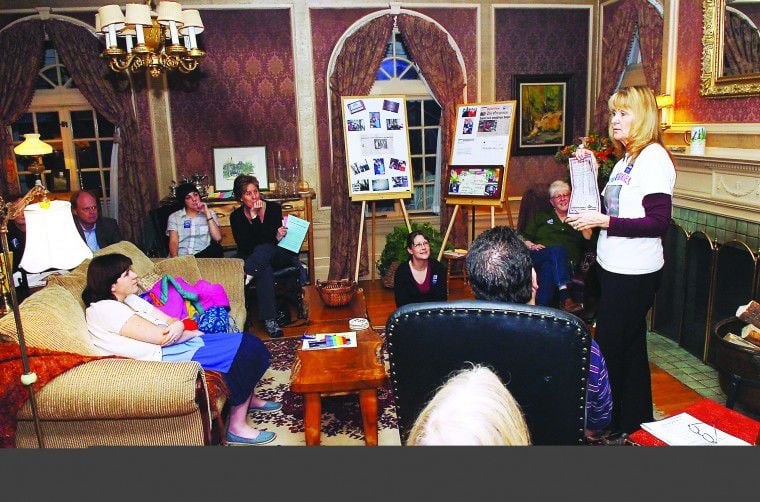 Diane Groff, center, and Liz Cahill, center right, share their experiences Wednesday at a Marriage Matters meeting in Pendleton. The couple was married during the brief period in 2004 when Multnomah County was issuing same-sex marriage licences.

Tuesdays viewers of Glee got a message about marriage equality  if they watched the commercials.

The states largest gay rights group, Basic Rights Oregon, began airing several 30-second spots on Fox and other cable channels with the goal of showing why marriage matters to same-sex couples. The group is eyeballing a possible ballot measure in 2012 to reverse Oregons 2004 ban on gay marriage.

A group of 50-plus gathered at the Pendleton House Bed and Breakfast on Wednesday evening to view the commercials and participate in a conference call with BRO executive director Jeana Frazzini and those attending other house parties scattered around Eastern Oregon.

Frazzini said recent polls show more Oregonians favor same-gender marriage than in 2004, but whether a ballot measure to reverse the ban would pass now isnt clear.

Results have indicated we still have our work cut out for us, Frazzini said,  but were within striking distance of Oregonians supporting marriage for same-sex couples.

The Glee commercial featured several couples  both homosexual and heterosexual  talking about love over the background of soft guitar music.

Jeannie, married 27 years to Roger, ended the spot by saying, Love is love  it belongs to everybody.

The ad is one prong in BROs three-year conversation with Oregonians about why marriage matters to same-sex couples. Supporters are going door to door, sponsoring movie showings and holding community meetings.

Liz Cahill and Diane Groff, teachers at McLoughlin High School in Milton-Freewater, share their story in one of BROs brochures. The couple addressed the group crowded into the elegant Pendleton House living room.

Cahill and Groff said they experienced the joy of marriage in early 2004. Six months later, the Oregon State Supreme Court nullified their marriage license along with those of 3,000 other gay couples married at the Multnomah County Courthouse.

Groff groped for words to introduce her life partner.

This is my beautiful ex-wife Liz, she said, drawing laughter.

Cahill and Groff had resigned themselves to living outside of any legal marriage. Then, in 2004, they got news that Multnomah County had started issuing licenses to gay couples.

The women, along with another lesbian couple, drove to the Multnomah County Courthouse and joined a line that snaked around the building. Standing in pouring rain for almost six hours, they got to know the couples in their general vicinity while ignoring a contingent of protesters. Finally, they climbed the front steps and stood before one of a dozen ministers on hand to conduct weddings. They exchanged vows.

I felt like I could exhale, Cahill said. I was safer. I was just like anyone else. It was a huge relief.

Penny Gavette, a member of Pendletons chapter of Parents and Friends of Lesbians and Gays, which hosted the evening, wants to bring marriage back to Cahill and Groff and other same-gender couples. Support for such a measure, she said, is plentiful even on the dry side of the state.

Were disproving the myth that anti-gay voices are the only voices in Eastern Oregon, she said.

Frazzini hopes the conversation continues around the state as the commercials spread their marriage equality message and supporters continue to talk to their neighbors.

This is about connecting to Oregonians outside of a political fight, she said, when there is nothing on the ballot and no vote pending.