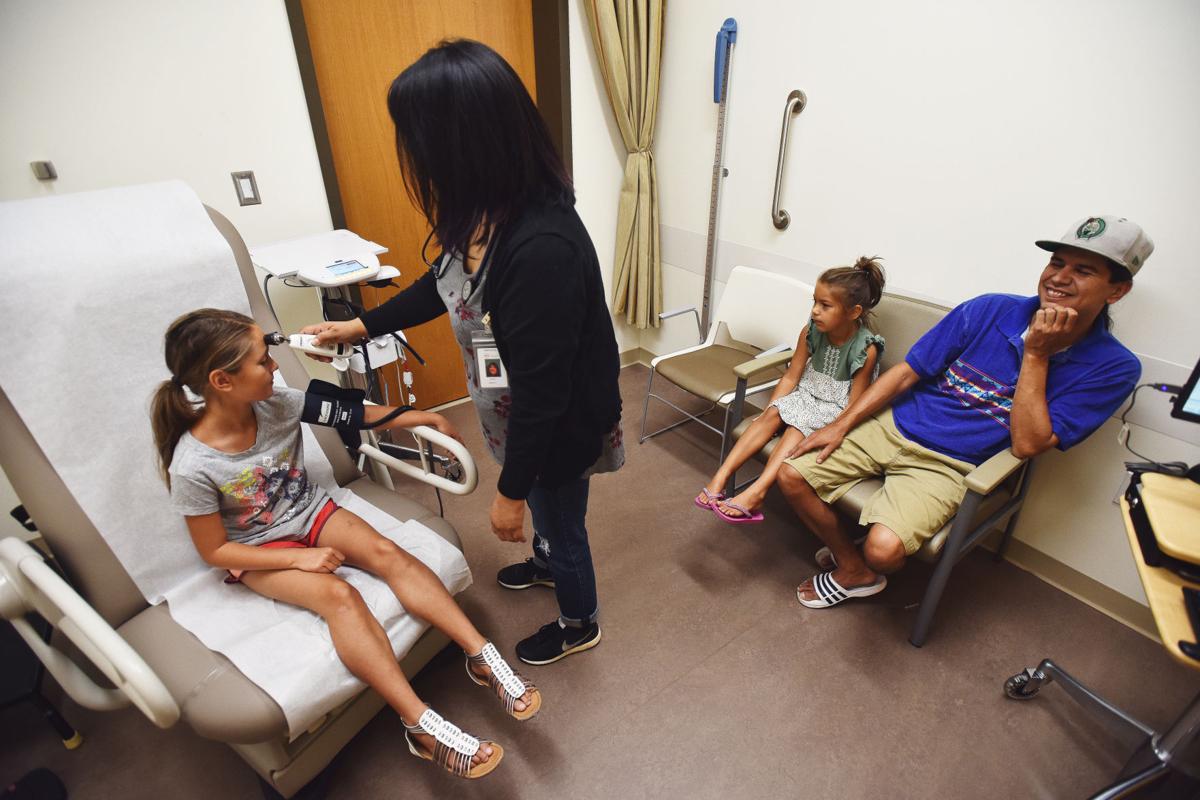 Registered nurse Shana Alexander takes vitals on Annalise Watchman, 8, as Watchman's father, John, and sister, Aniah, look on during a visit to the medical clinic at Yellowhawk Tribal Health Center in Mission. 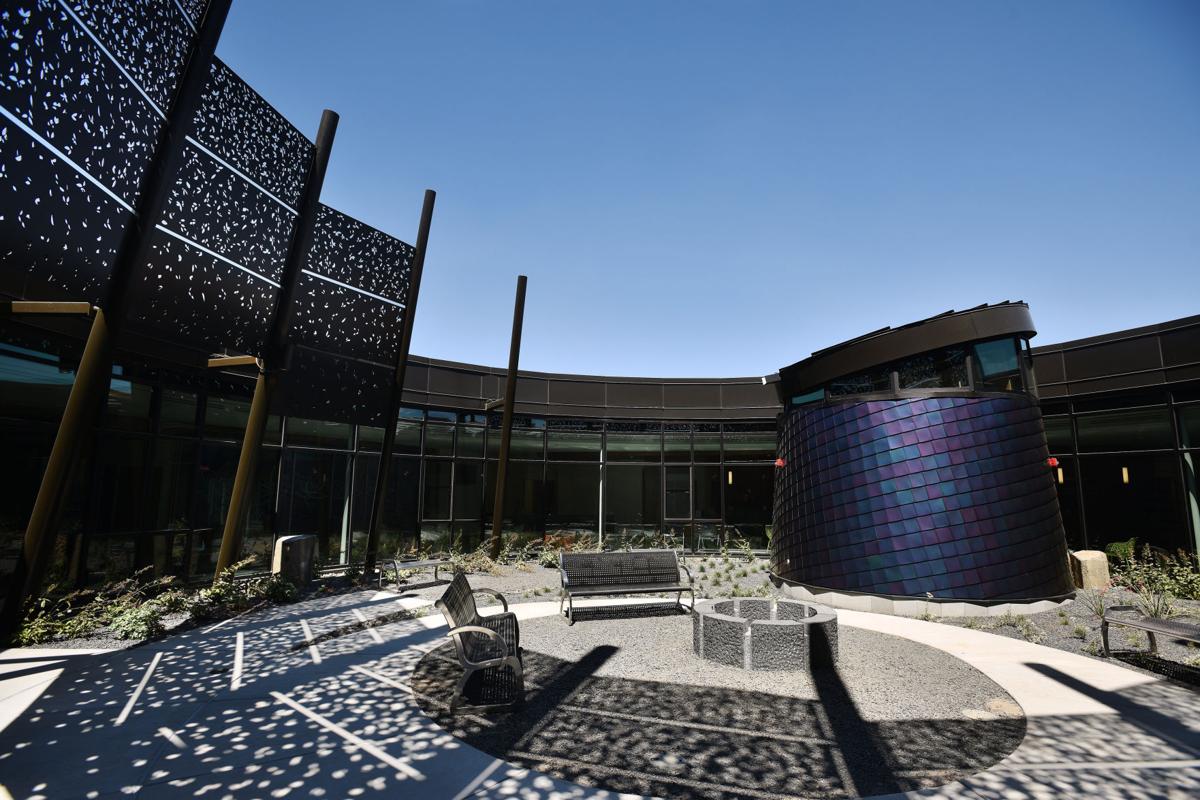 The central courtyard, called the Teekintéekin, offers patients at Yellowhawk a quit place to wait for thier appointment. Teekintéekin is the Cayuse/Nez Perse work for meadow. 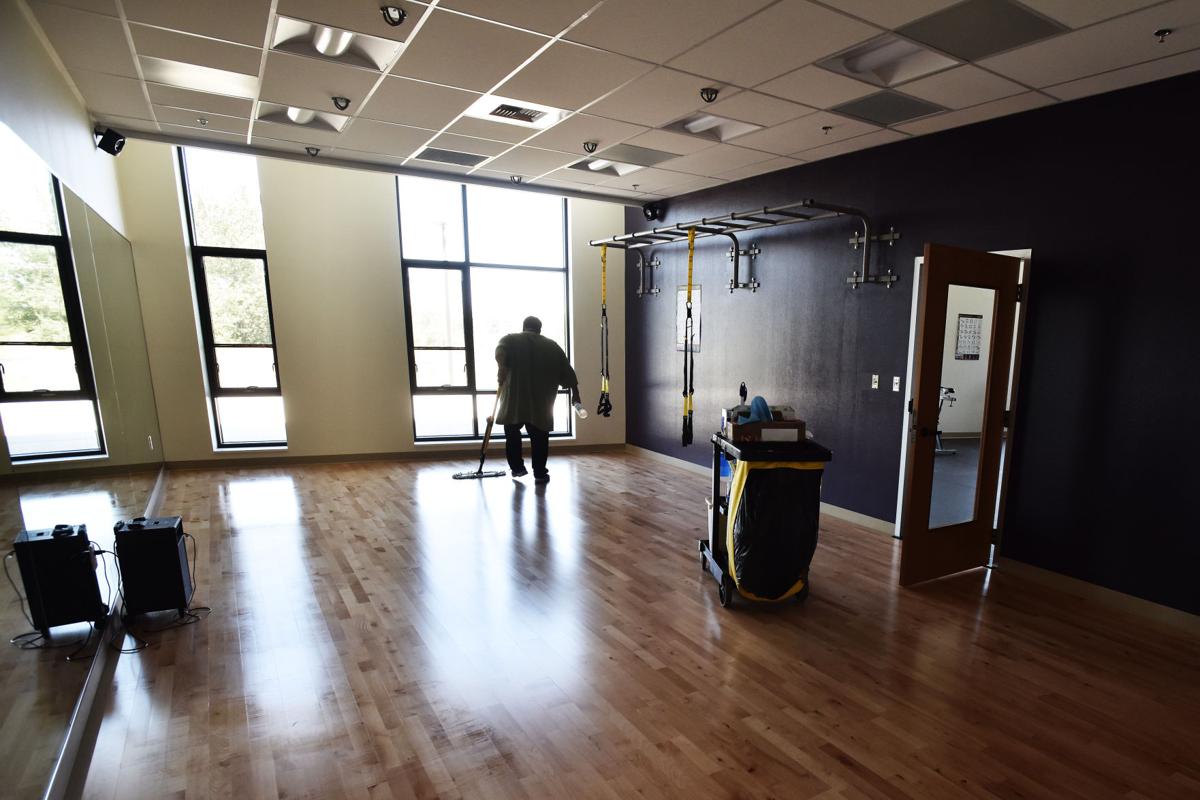 J.J. Jackson mops the floor in a fitness room on Friday at the Yellowhawk Tribal Health Center in Mission. 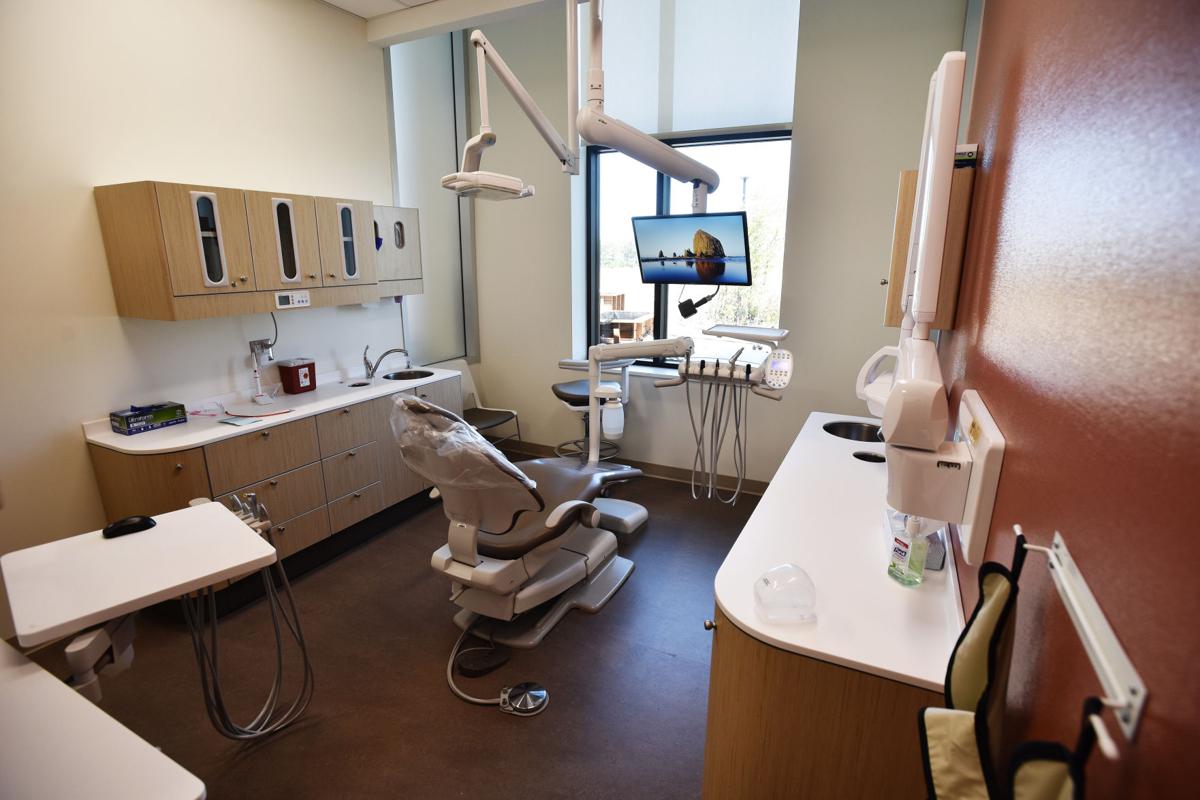 There are 10 exam rooms in the dental clinic at the new Yellowhawk Tribal Health Center in Mission. Six more than were onsite at the old Yellowhawk facility.

Registered nurse Shana Alexander takes vitals on Annalise Watchman, 8, as Watchman's father, John, and sister, Aniah, look on during a visit to the medical clinic at Yellowhawk Tribal Health Center in Mission.

The central courtyard, called the Teekintéekin, offers patients at Yellowhawk a quit place to wait for thier appointment. Teekintéekin is the Cayuse/Nez Perse work for meadow.

J.J. Jackson mops the floor in a fitness room on Friday at the Yellowhawk Tribal Health Center in Mission.

There are 10 exam rooms in the dental clinic at the new Yellowhawk Tribal Health Center in Mission. Six more than were onsite at the old Yellowhawk facility.

The new Yellowhawk Tribal Health Center is adorned in colors of sage, gold, navy, rust, and plum. Each color is accompanied by a plant in the traditional foods of Confederated Tribes of the Umatilla Indian Reservation, arranged in the order they would be presented during the CTUIR First Foods.

These plants and colors represent something else: a department in the new facility’s integrative and comprehensive approach to health care.

Yellowhawk will host a grand opening Tuesday to give people a peek at the new facility. The building officially opened May 1 with a soft opening for patients and tribal members and the first appointments took place May 2. It is a circular building that offers a host of patient-centered services. The building has space for most health care needs, including behavioral health, medical, dental and a pharmacy.

The new health center has been a long-time goal of the CTUIR health commission. McGuire said it officially started saving for the new facility in August of 2006 after the Board of Trustees appropriated $3 million from “available resources” to a permanent health care fund.

“A lot of folks thought this might have come from gaming revenue, but that’s not true,” she said, referring to the nearby Wildhorse Resort and Casino. “It is one of the projects of the tribe that wasn’t built from gaming revenue.”

The new building provides more room to grow. Yellowhawk was previously housed in a facility built in the 1970s. According to a press release, the new building is nearly double the size of the previous clinic. It also has space for new services such as optometry, audiology and physical therapy, which will be introduced later.

“Some of those expanded services are kind of what the future holds,” said McGuire. “To have a patient-centered care home — that’s kind of the goal. You come here for all of the services. There’s not a lot of places you can go to go to a medical appointment and then go to the dentist in the same building.”

The layout of the space was informed by the Nuka System of Care. According to Southcentral Foundation, a nonprofit health care foundation owned by Native Alaskans, the Nuka System of Care “is built upon the simple, yet revolutionary belief that the relationship between the primary care team and the patient is the single most important tool in managing chronic disease, controlling health care costs, and improving the overall wellness of a population.”

It serves to improve communication between health care providers and allow more integration of services, such as medical and dental.

“Putting it into practice is the more challenging side,” said interim community wellness director Carrie Sampson. She said Yellowhawk is starting to move away from calling it the Nuka System of Care and is implementing its own integrative practices.

The new facility is another aspect of the tribe becoming autonomous in its own health care. According to the Yellowhawk website, the CTUIR took ownership of its tribal health care in 1996 from Indian Health Service, an agency within the United States Department of Health and Human Services, whereas previously it was overseen by the federal government.

Yellowhawk is also in the process of becoming accredited through the Public Health Accreditation Board, which takes years to accomplish. At this time, only one tribe in the United States is accredited by the board — Cherokee Nation Health Services in Oklahoma.

The ultimate purpose of a health care facility becoming accredited is to improve the quality of care provided to patients, said Sampson, and it will hopefully reduce the range of health disparities prevalent among the Native American population.

Data from the Indian Health Service shows that American Indians and Alaska Natives have a life expectancy 5.5 years less than the rest of the U.S. population. And they die at higher rates among categories such as diabetes, suicide and assault and homicide.

“I feel like going through this process of public health accreditation is — ultimately the end result is to reduce those health disparities that we see,” said Sampson. “That’s why they ask you to do this community health assessment in the beginning. Because after we’ve been accredited for 10 years we want to see a really huge improvement because we’re acting as a better functioning public health organization.”

Sampson said a 2015 community health assessment conducted by Yellowhawk highlighted areas that could be improved, such as obesity and diabetes. She said the assessment showed that over 80 percent of the population was overweight or obese. The health assessment didn’t present any new information, but it gave them a baseline to work with, she said. “It’s kind of exciting in a way that we’ll be able to follow that and see if the work that we’re doing is improving and impacting the community.”

Public health accreditation was initially structured towards county health departments, which makes it easier for them, said Sampson.

“Tribal health centers are different. Other than Cherokee Nation, they are mostly centered under one system,” she said referring to the array of services available under Yellowhawk’s roof.

“So when we are trying to meet the standards and measures that PHAB requires, it’s challenging. Public county health departments are not structured like that. It’s pretty cut and dry for them and we have to find those fine lines.”

“And then they did a draft community health improvement plan after that — a sort of light strategic plan — it was sort of a test run of the three requirements you have to do to even apply,” she said.

Sampson said, “And it was kind of asking ourselves: “‘Well, where are we going now?’”

The health center started seriously pursuing the accreditation process in the latter half of 2016. Sampson applied for an accreditation coordinator through the Center for Disease Control’s Public Health Associate Program and was landed with Courtney Stover, who is assisting with the process.

“So we’re very fortunate to have her because as you know in our rural areas it is very difficult to find individuals with a public health background. When she arrived here in October I feel like that’s when we really got to get the ball rolling again,” said Sampson.

“I think more tribes are becoming interested as more funding becomes available to do some of these things,” she said.

In fact, many tribes in the U.S. are almost finished with the accreditation process. “We’re not trying to be the second tribe to become accredited in the United States,” said Sampson. “But we are thinking we might be the first tribe in the Northwest.”